A transgender Loose Women star has lashed out at a male bank director who occasionally dresses as a woman for accepting a place on a list of the Top 100 Women in Business.

India Willoughby, who was the first woman in the world to front and all-female talk show, has lashed out at Philip Bunce – who works at Credit Suisse.

She said: ‘As a transsexual woman with a recognised medical condition, who fights for credibility every day, who fights myths every day, who’s undergone lengthy surgery, whose life was unbearable in the wrong body, I find this story an insult.

India Willoughby, 51, has hit out at Mr Bunce following his award. She became the first woman in the world to front and all-female talk show 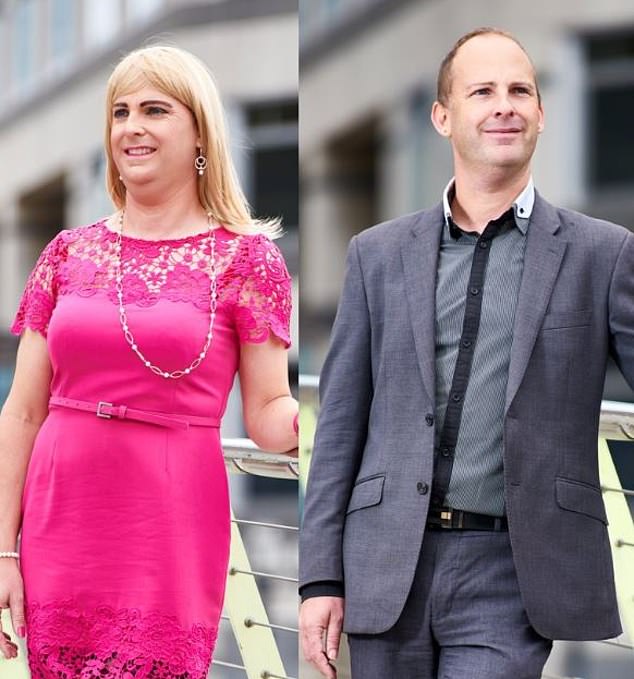 The bank director as Philip (right) and as Pippa (left). His appearance on the Financial Times & Her-oes Champions of Women list has been met with criticism with some labeling it a ‘a mockery of women’ 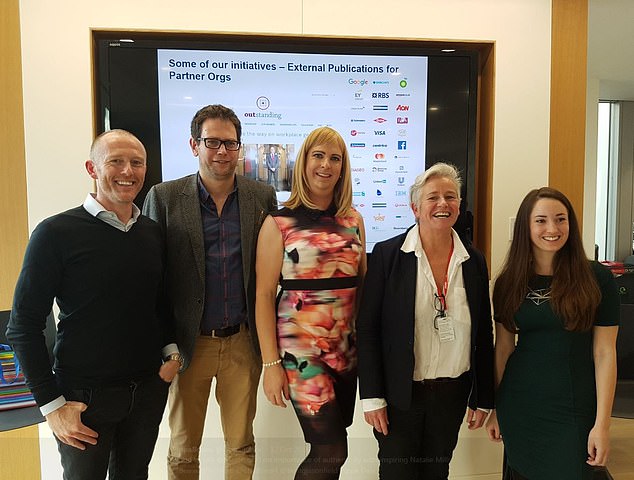 Pippa Bunce (middle) talking to Mastercard about the ‘importance of authenticity’. The bank director claims to split his time ‘fifty-fifty’ between Pippa and Philip

Mr Bunce claims to be ‘gender fluid’ and ‘non-binary’ and will split his time ‘fifty-fifty’ between Pippa and Philip – occasionally dressing in a wig and dress.

But his appearance on the Financial Times & Her-oes Champions of Women in Business list has been branded ‘insulting’ by those who think occasionally dressing as a woman is not enough to qualify.

Mr Bunce, who worked his way up through the company as a man – a company which typically pays its male employees more – only started cross dressing at work four years ago.

Instead of appearing on the male equivalent list of top 100 people in business however, he has chosen to appear on the female.

This has led Kiri Tunks, co-founder of Woman’s Place UK, to speak out.

In an interview with The Times, she said: ‘This makes a mockery of women and their achievements and begs the question does Bunce simultaneously feature in top 100 male executives and if not, what were his particular achievements as a woman to merit inclusion in the female list?”

While LGBT activist Kristina Harrison, who was born male but transitioned 20 years ago, labelled Mr Bunce’s appearance on the list as ‘insulting’. 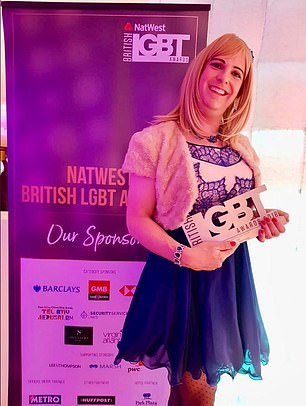 Pippa Bunce (pictured) receiving an award at the British LGBT awards. The most recent award Mr Bunce accepted has been met with widespread criticism however

Mr Bunce spoke out at the time of winning the award, and wrote on LinkedIn that he was ‘humbled’ to have received it.

He said: ‘It was a fantastic night with so many inspirational and aspirational people, groups and networks who are all making such an impressive difference, I was truly humbled to be with them all.

‘Having so many sincere and genuine friends made it a very special night indeed and to receive an award amongst other amazing individuals such as Sir Richard Branson, Laverne Cox, Suzie Green, John Bishop and many others was incredible.’

Credit Suisse took to Twitter to praise Mr Bunce – who has been affectionately referred to as ‘Pips’ – for appearing on the list.

It wrote: ‘Congratulations to Pips Bunce on being listed on the Top 100 Female Executives list in the 2018.’

The post, however, has attracted a considerable number of replies – many of which criticise the executive for accepting the position.

Commenting on the post Gin wrote: ‘Congratulations to the 99 women who made the top 100 and commiserations to the 101st whose place in the top 100 was stolen by a man who occasionally wears a dress.’ 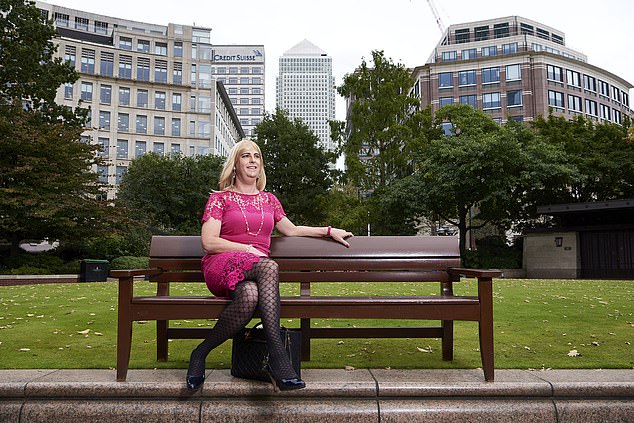 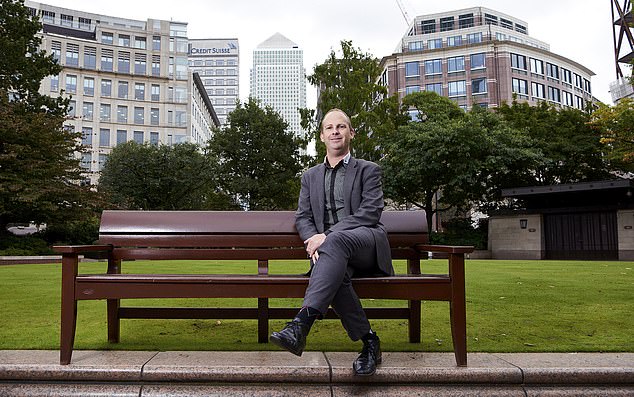 Mr Bunce has received criticism for his acceptance of the award, but not everyone has been quite so critical.  Jason Shaw, writing on Twitter, said: ‘This is an important distinction and a bold step in the direction of gender parity.’ 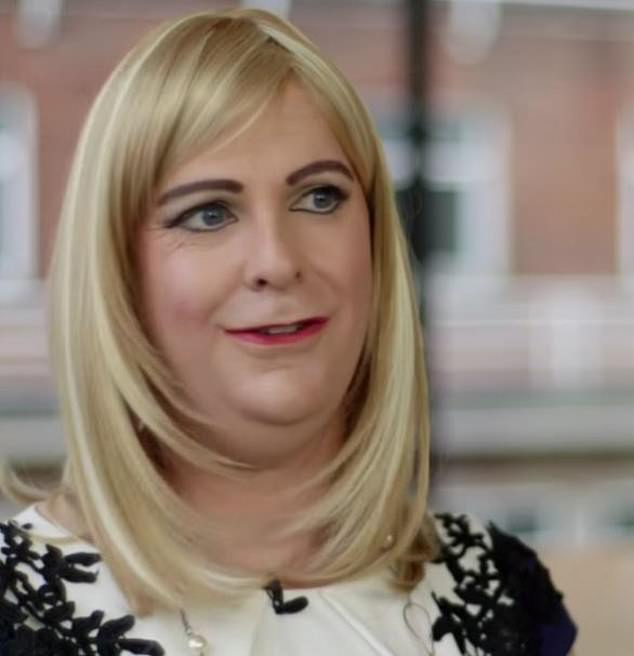 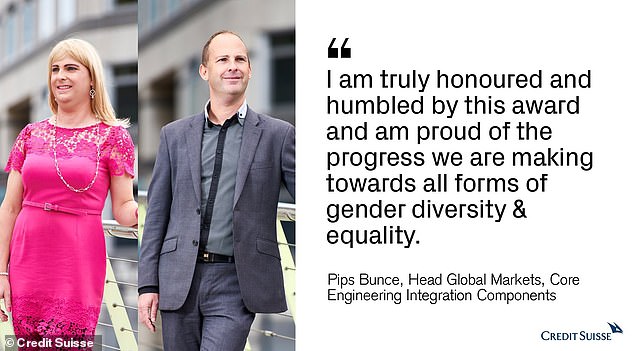 The bank director as Philip (right) and as Pippa (left). Credit Suisse took to Twitter to praise their employee for the award and Mr Bunce said he was ‘humbled’ to receive it and that ‘progress’ is being made to all forms of gender diversity and equality

Helen Barrett thought similarly, writing: ‘That’s not a woman, it’s a man who stole an award from a woman.’

Not everyone was sceptical of the businessman’s appearance on the list however.

Jason Shaw, also writing on Twitter, said: ‘This is an important distinction and a bold step in the direction of gender parity.

‘More and more, we are starting to understand that gender lives on a spectrum. By recognizing this gender fluid individual, the list and Credit Suisse meaningfully challenge gender bias. Thanks.’

Mr Bunce appeared in 32nd place on the list while Brenda Trenowden – the head of financial institutions for AMZ in Europe appeared first.

Jayne-Anne Gadhia, the chief executive of Virgin Money, appeared in second place while Melanie Richards, the deputy chair of KPMG, appeared in third.

When approached for comment by The Times, Mr Bunce declined to comment but Credit Suisse said it was ‘proud to be an inclusive employer’.