A mother-in-law has been slammed online after enjoying a ‘creepy’ dance with her son at his wedding – and then ‘latching’ onto him in an awkward hug in front of his bride.

The anonymous woman, who is believed to be from the U.S., is seen cosying up to the groom in photos shared by the bride’s uncle on Reddit.

To make matters worse, she also wore a sheer white lace dress to the big day – which sparked a flurry of criticism from Reddit users.

The baffled uncle captioned the post: ‘Mother-in-law wore a sheer white lace dress to the wedding.

‘[She] and groom had a creepy mother/son dance, and [she] latched onto groom in an awkward hug.

Many outraged Reddit users commented on the thread, which was originally posted last year but resurfaced recently.

One joked: ‘She’s probably hoping to segue into the honeymoon suite. Sans bride of course.’

Another wrote: ‘Jeez, I thought the newlyweds were dancing and the other woman in the wedding dress was the MIL. How does he not feel icky? I feel icky.’ 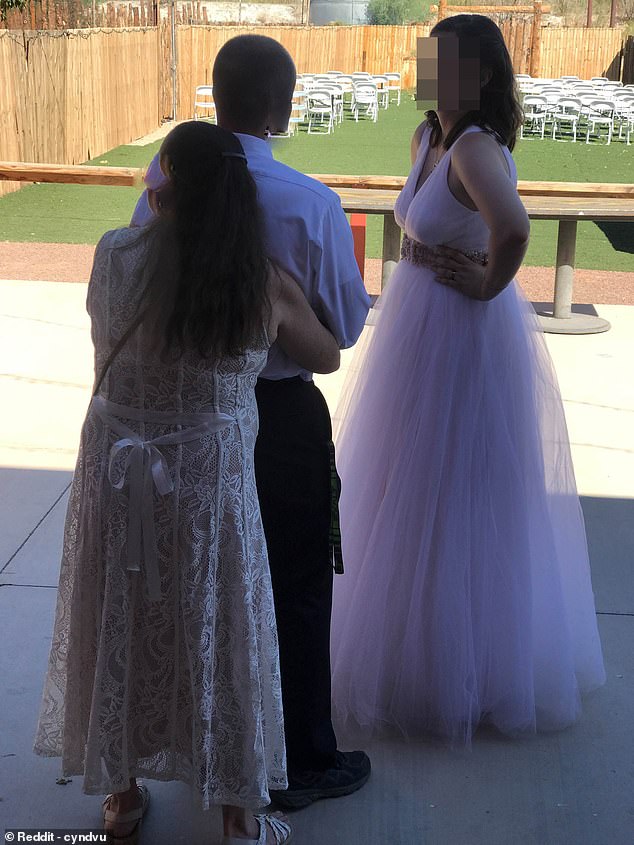 The anonymous woman, believed to be from the U.S., then grabs her son from behind and ‘latches’ onto him in an ‘awkward hug’

‘It’s kinda creepy that mom and son appear to have their foreheads touching,’ observed another.

Taking to the thread, one appalled Reddit user commented: ‘Hurk. Ick. At first glance, I thought that the MIL was the one in the poofy dress. Wow. Where was a bridesmaid with the red wine or a gardener with a hose when you need them?!’

‘Please inform your neice that she looks STUNNING in that dress? Also that her MIL looks kinda like an escaped mental patient from a horror film in a tatty nightgown in hers?’ wrote another scathing user.

Many outraged Reddit users commented on the thread, which was originally posted last year but resurfaced recently

One pointed out: ‘Your neice’s body language speaks volumes,’ while another added: ‘The niece looks like she’s sooooo done with this s*** in the second picture.’

The photos were shared on the subreddit r/JUSTNOMIL – a group which has 931,000 members and is described as ‘a place to get support and advice dealing with mean, nasty, toxic, and/or abusive MILs and moms’.

Yesterday we told how a groom’s mother was blasted for ‘spooning’ her son and clutching his hand in a ‘death grip’ during a very awkward family wedding photograph.