‘Creepy’ student, 20, avoids jail after trying to sell naked photos and sexually explicit video of his 20-year-old ex because she ended their 14-month relationship

A ‘creepy and obsessed’ student who tried to sell naked photographs and an ‘explicit’ video of his ex-girlfriend for revenge after she split up with him has been spared jail.

Milo Moran, 20, hacked into his former partner Olivia Judson’s Facebook account and took the lewd material before trying to sell it on to two men she had previously dated.

Poole Magistrates’ Court heard he was ‘motivated by jealousy’ after their 14-month relationship ended in November 2017.

The court was also told Miss Judson, 20, had sent pictures to him consensually during their relationship when they were both 17 – but the images he took from her Facebook were made after she turned 18 and therefore were not consensual. 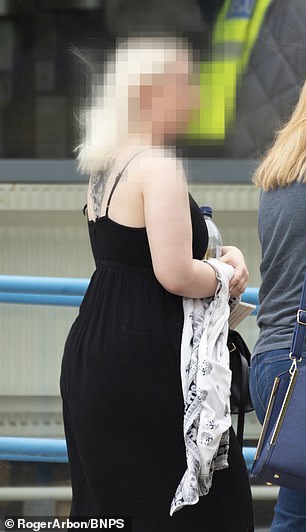 Milo Moran, 20, pictured left, was handed a suspended sentence after hacking into his ex-girlfriend Olivia Judson’s, right, Facebook and stealing naked photos and an explicit video before trying to sell them on to more of her former partners

David Finney, prosecuting, told the court it was clear the photos were from after their relationship because of a distinguishing tattoo the victim had done after her 18th birthday.

The Act makes it a criminal offence for a person to: ‘disclose a private sexual photograph or film if the disclosure is made (a) without the consent of the individual who appears, and (b) with the intention of causing that individual distress’.

It means those who maliciously share sexually explicit images without the subject’s consent could face up to two years in prison.

The Law Commission has been asked by the government to review the legislation, including anonymity, and make recommendations on whether victims should be extended the same protections by 2021.

The law currently covers the sharing of images both on and offline.

Images posted to social networking sites such as Facebook and Twitter are covered by the offence, as are those that are shared via text message, email, on a website or via physical distribution.

The offence covers photographs or films which show people engaged in sexual activity or depicted in a sexual way or with their genitals exposed.

He said: ‘It is clear he did not have these pictures consensually.’

Miss Judson discovered the betrayal when one of her former partners told her Moran had offered him the explicit material.

Reading her victim impact statement, she said the incident had caused her a huge amount of distress and described Moran as ‘creepy’.

She said: ‘I lost sleep and I was scared that he may have posted them on a public forum. It was a complete invasion of my privacy.

‘I constantly feel like I’m being watched, I check my online security daily and even then I still don’t feel completely safe.’

She added: ‘At first I thought he was jealous but now I think he has an obsession with me. I think it’s really creepy.’

Moran, a biology student at Cardiff University, pleaded guilty at an earlier hearing to disclosing private sexual photographs and films with intent to cause distress.

Yesterday he was handed an eight-week suspended sentence and ordered to pay the victim £300 compensation.

He was also slapped with a two-year restraining order preventing any contact with her.

Eva Russell, mitigating, said Moran suffered from mental health issues and that he had been ‘consumed by guilt’.

She said: ‘This was his first serious relationship and he couldn’t let it go. He started snooping and from there he sent images to men known to her.

‘Jealousy in some ways played it’s part. However, he has shown clear remorse and he has been consumed with guilt.’

Handing Moran his sentence, magistrate Anne Ketteringham said: ‘This offence is so serious it crosses the custody threshold but given the high chance of rehabilitation your sentence will be suspended.’ 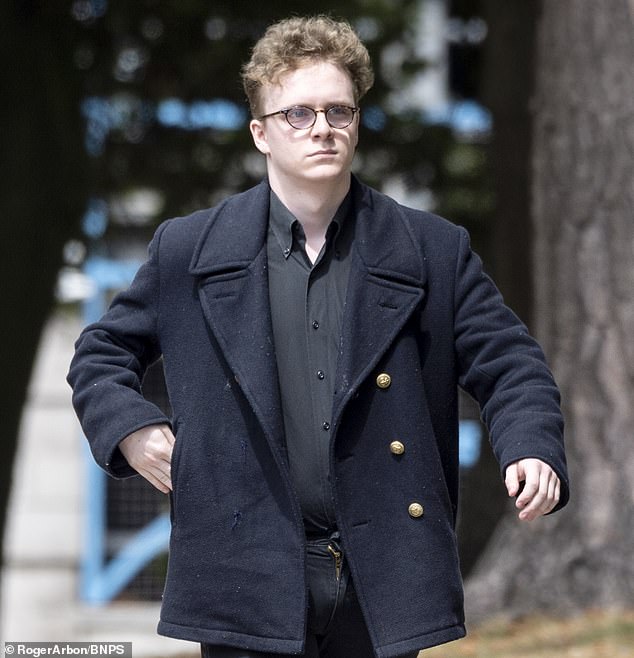 The court heard Moran was ‘obsessed’ and ‘motivated by jealousy’ after his relationship with the victim, also 20, broke down in 2017