A television crew filming a police brutality scene at the spot where Eric Garner died stopped production after one of the actors had a bottle thrown at him.

Mark John Jefferies, James Russo and Anthony Mangano had been filming a scene for ‘The Fifth Boro’ in Staten Island on Thursday night, the New York Daily News reports.

The scene involved the two white actors wrestling Jefferies to the ground at the Bay Street corner in Tompkinsville where Garner died after an NYPD officer put him in a chokehold while arresting him in July 2014.

But just before the cameras started rolling, Jefferies said a bottle was thrown at him and missed his feet by inches.

The show’s director Steve Stanulis ultimately decided the location was a distraction so the team packed up the set and moved. 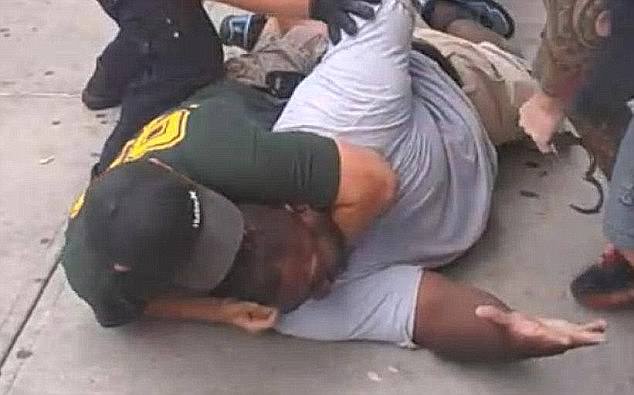 Stanulis is a former Staten Island police officer who started his career with the NYPD working in the borough from 1994 until 2000, according to the Daily News.

But he claimed he wasn’t aware of the location’s significance until he was informed by local residents.

He insisted he picked it because of its ‘shady’ vibe.

‘Everyone was fine, but there were a couple of malcontents,’ he told the paper.

Jefferies, a 28-year-old from the Bronx whose credits include playing a young 50 Cent in Get Rich or Die Tryin’, also claimed he didn’t know the spot was where Garner died.

He said the problem was with a handful of people and the majority of spectators were supportive. 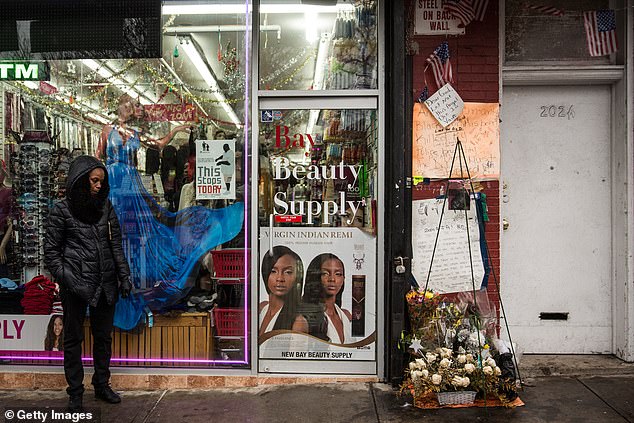 Garner, 43, was accused of selling loose, untaxed cigarettes and stopped by police on Bay Street (above) in Staten Island on July 17, 2014

‘They were just being ignorant and I don’t have time for that,’ he told the Daily News.

He said when he approached the person who threw the bottle, they said: ‘If you don’t like it, you can get the F out of here.’

Jefferies said some spectators stepped in and prevented the situation from escalating.

‘It was fortunate it ended the way it did, it could have been a lot worse,’ he added.

Filming for the pilot of the show – which also stars Tara Reid, Sean Young and Lilo Brancato – started on Thursday at Tappan Park in Stapleton.

A scene had also been planned to be filmed outside the bodega across the street from where Garner died.

Garner, 43, was accused of selling loose, untaxed cigarettes and stopped by police on Staten Island on July 17, 2014, and refused to be handcuffed.

A cell phone video that showed Garner – who had asthma – gasping ‘I can’t breathe’ went viral after his death, sparking angry protests about the treatment of black men and boys at the hands of white police officers. 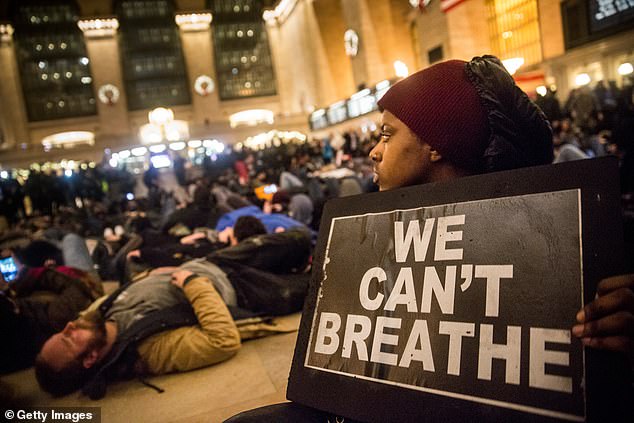 The medical examiner’s office ruled Garner’s death a homicide, caused in part by the chokehold.

In July, just before the fourth anniversary of Garner’s killing, the NYPD announced it would allow disciplinary proceedings to go forward against patrolman Daniel Pantaleo.

Pantaleo is seen on the video putting Garner in the chokehold, which is banned under NYPD policy.

A pointed letter from the NYPD’s top lawyer informed the U.S. Department of Justice of an administrative case that could result in dismissal for Pantaleo, because ‘there is no end in sight’ to the federal probe.

But other probes have taken far less time than the case of a victim whose dying words became a slogan for the Black Lives Matter movement.

A police watchdog agency, the Civilian Complaint Review Board, will prosecute Panteleo under a memorandum of understanding with the NYPD, according to Lawrence Byrne, deputy commissioner for legal matters.

In a statement, the DOJ said it already told the NYPD in the spring it could go forward and that the move ‘does not have any bearing on the decision-making timeline.’

Garner’s family received $5.9 million from the city in 2015 to settle a wrongful death claim.

‘We want to see this done. … We want justice,’ Garner’s mother, Gwen Carr, said at a press conference in July with the Rev. Al Sharpton, who praised the move but also called on the U.S. attorney general to move forward with federal action.

The family and police reform activists have expressed deep frustration over the inaction by federal authorities and the NYPD after a state probe ended without criminal charges.