‘It would have been an over-reaction… our doctor is an expert’: Cricket Australia defend their medical team as row erupts over ‘potentially fatal’ handling of Steve Smith’s concussion

Cricket Australia has sparked a concussion row after defending the team doctor’s decision to allow Steve Smith to resume his innings after he was struck on the neck.

The batsman was swiftly placed in the recovery position by England fielder Jos Buttler, but team doctor Richard Saw ruled Smith was in a fit state to continue after conducting concussion tests.

The 30-year-old suffered headaches after play ended on day four and was withdrawn on Sunday after undergoing further examination.

Alex Kountouris, Cricket Australia’s manager of sports medicine, told a news conference in Australia on Monday he was ‘100%’ satisfied with Saw’s treatment of Smith in London on the weekend, and he urged against any over-reaction to the sport’s new concussion guidelines.

Smith had to leave the field after being hit on the neck near the rear base of his batting helmet by a fast, sharply rising delivery from Jofra Archer on Saturday. Saw conducted tests before allowing Smith to return at the fall of the subsequent wicket, and the ex-test captain was eventually dismissed for 92.

Smith complained of headaches later Saturday and was ruled out of the remainder of the match on Sunday after displaying concussion symptoms.

? “If we pulled every player out who had a head impact, we’d be pulling out 80% of players who don’t have a concussion.”

Marnus Labuschagne replaced Smith, becoming the first concussion substitute in international cricket, and scored 59 in an important innings that helped Australia draw the match at Lord’s and retain a 1-0 lead in the five-match series.

‘The reality is only about one in five or six head impacts end up in concussion,’ said Kountouris, who added that Cricket Australia’s research showed delayed concussion accounted for up to 30 per cent of those cases.

‘If we pulled out every player who had a head impact, we’d be pulling out 80 per cent of players who don’t have a concussion and taking them out of the game. So that would be an overreaction.’ 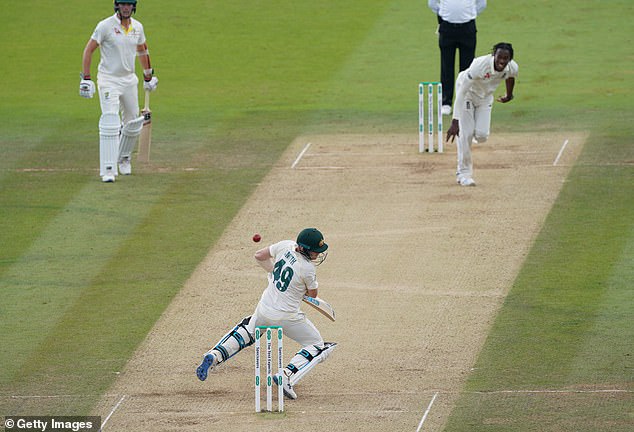 Kountouris said three other batters were hit in the head, but only Smith had a concussion.

‘Our doctor is an expert in his field. He’s trained to pick up even the minor signs of concussion. Everything he did was according to the protocol, he was very thorough and … we’re 100% happy with what happened over there.’ 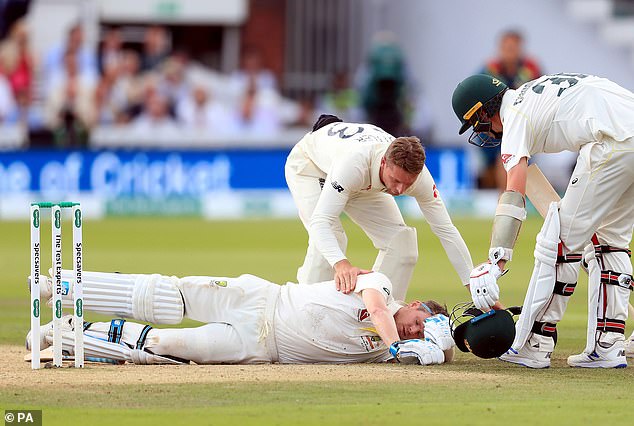 Former England international footballer Ryan Mason – who retired in February 2018 after sustaining a fractured skull in an on-field collision – condemned Cricket Australia’s handling of the matter.

He tweeted: ‘I think anyone watching the match could tell by the fall he was concussed.. The decision has to be taken out of his hands!

‘It’s all good laughing and joking but his health was put in danger and another blow could have been fatal!’