When Colin Hinchley looked up the cost of a day return train ticket from Derby to Southampton, he was stumped by the cost of £159.40.

But by a clever trick known as ‘ticket splitting’ he managed to cut the cost to just £69.10 by splitting his journey into ten legs and printing out 26 paper tickets.

The cricket fan, who is travelling to watch England v India at the Ageas Bowl in Southampton on Friday, booked his 300-mile return trip with CrossCountry.

Cricket fan Colin Hinchley managed to cut the cost of his trip from Derby to Southampton from £159.40 to just £69.10 by splitting his journey into ten legs and printing out 26 paper tickets

He now has separate tickets for Derby to Coventry, Coventry to Banbury, Banbury to Oxford, Oxford to Basingstoke and Basingstoke to Southampton Airport Parkway.

Mr Hinchley, who is from Derby, will also go through each of the stations in reverse on the way back that same day, reported MoneySavingExpert.

He said: ‘I searched for train splitting online and used one of the tools. Cheekily, I used them for the info and then booked directly with CrossCountry.

‘By booking via the CrossCountry trains website, I was able to book specific seats, meaning I won’t have to keep moving throughout the journey.’

Mr Hinchley now has 26 paper tickets for his journey, which will take about four hours each way, including his tickets, seat reservations and collection receipts. 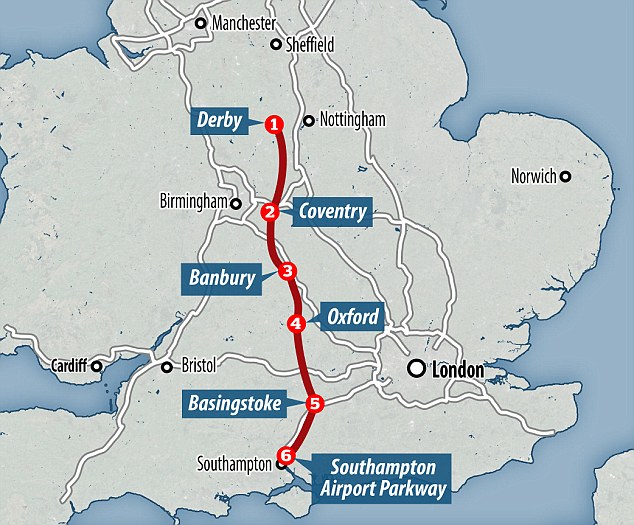 Mr Hinchley now has separate tickets for Derby to Coventry, Coventry to Banbury, Banbury to Oxford, Oxford to Basingstoke and Basingstoke to Southampton Airport Parkway

Split ticketing, where rail travel can be made cheaper by purchasing multiple tickets to cover separate parts of your journey, has long been used by passengers.

How did Colin Hinchley split his train tickets?

Travellers do not have to change trains as long as their service passes through the stations where they split their ticket.

It can save people money because different train companies have their own prices for alternative parts of the journey.

The practice is within the train operating companies’ terms, but is not advertised by them – with the emphasis on the user to work out how to find the best deal.

But it could be set to come to an end following a ticket consultation now taking place which is aimed at modernising rail fares and runs until September 10.

A CrossCountry spokesman said: ‘Split ticketing is a product of an outdated system of setting fares that was established in the 1990s.

‘We know that because of this rail fares can sometimes seem confusing, which is why the industry is consulting on options to update these rules.’