‘He’s a born superstar!’: Cricket fans go wild as Harry Brook scores an incredible SIX fours in an over as England pile on the runs on day one against Pakistan… and captain Ben Stokes can’t contain his delight on the balcony!

Harry Brook put Pakistan’s attack to the sword in the first Test in Rawalpindi as the England batter hit a remarkable six fours in a single over.

The No 5 had already started to up his strike rate prior to the 68th over, but when Saud Shakeel came on for his second over, Brook decided to put his foot down on the accelerator.

As Shakeel struggled to find his length, Brook took full advantage, stroking him through the covers when he over-pitched, and then rocking onto the back foot and pulling him away when the ball was too short. 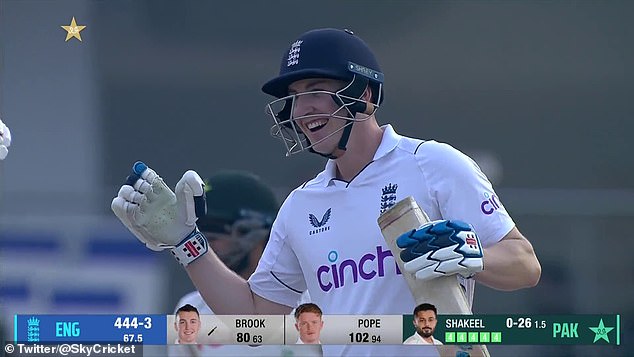 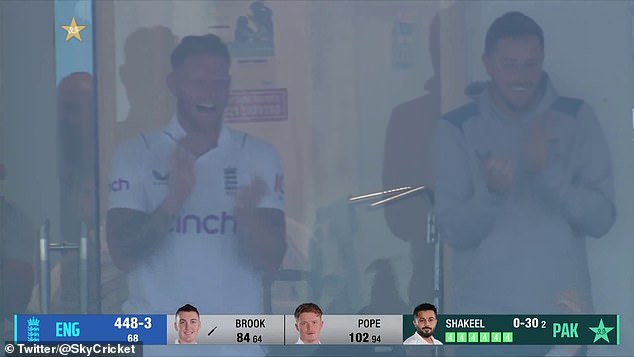 The final ball of the over was dragged down, and Brook blasted it through mid wicket to the boundary to make it 24 runs from the over.

As he ran down the pitch, a huge grin came across his face, before the camera cut to captain Ben Stokes on the balcony who could not contain his disbelief at Brook’s brutal hitting as he burst out laughing. Fans were equally impressed.

‘No way did Harry Brook just hit six 4’s in an over! Brutal,’ one fan wrote on Twitter.

‘That was so much fun, thank you Harry Brook,’ another supporter added.

Brook was also part of England’s T20 World Cup-winning squad, and impressed during England’s T20 series in Pakistan prior to that tournament.

He is still in the infancy of his international career, but fans are already convinced he is the real deal.

‘Harry Brook is a special player,’ one wrote on social media.

‘We’ve been saying it a long time over this side of t’hills, Harry Brook is a born superstar,’ another agreed. 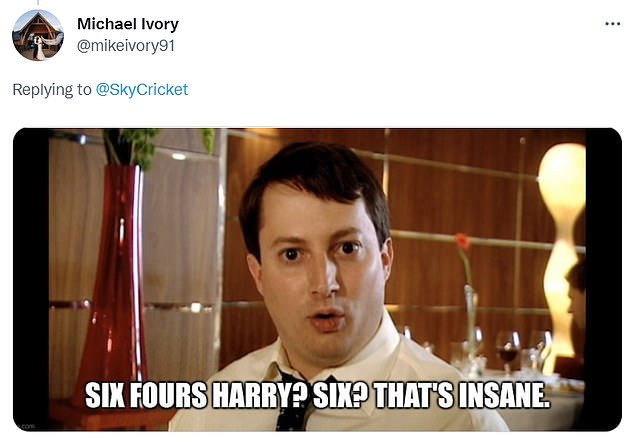