Cricket scandal: Steve Smith is paraded through Johannesburg Airport like a ‘drug mule’

Disgraced Australian cricket captain Steve Smith has been bundled through Johannesburg Airport ‘like a drug mule’ after being sent home for his role in the ball-tampering scandal.

Smith looked close to tears as armed police escorted him through the terminal, with reporters asking ‘if he was ashamed’ and cries of ‘cheat’ echoed through the building.

‘What do you say to the people who are calling you a cheat right here?’ he was asked as around 10 policeman struggled to march him through a security checkpoint.

‘One of Australia’s greatest ever cricketers who made a shocking error in judgement now being ushered through an airport like a convicted drug mule,’ former state cricketer-turned reporter Theo Doropoulos wrote on Twitter. 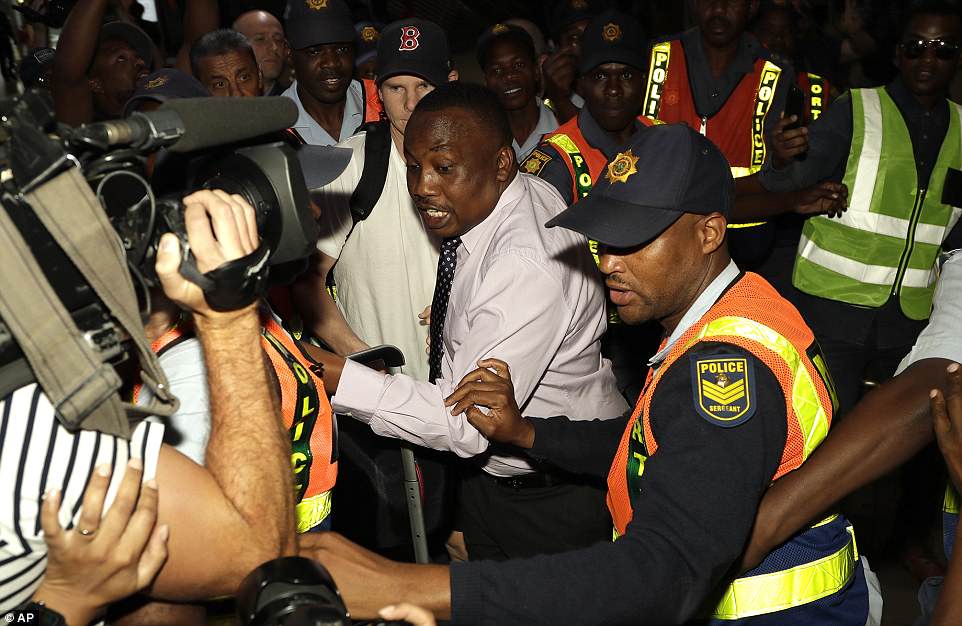 ‘What do you say to the people who are calling you a cheat right here?’ Smith was asked as around 10 policeman struggled to usher him through a security checkpoint 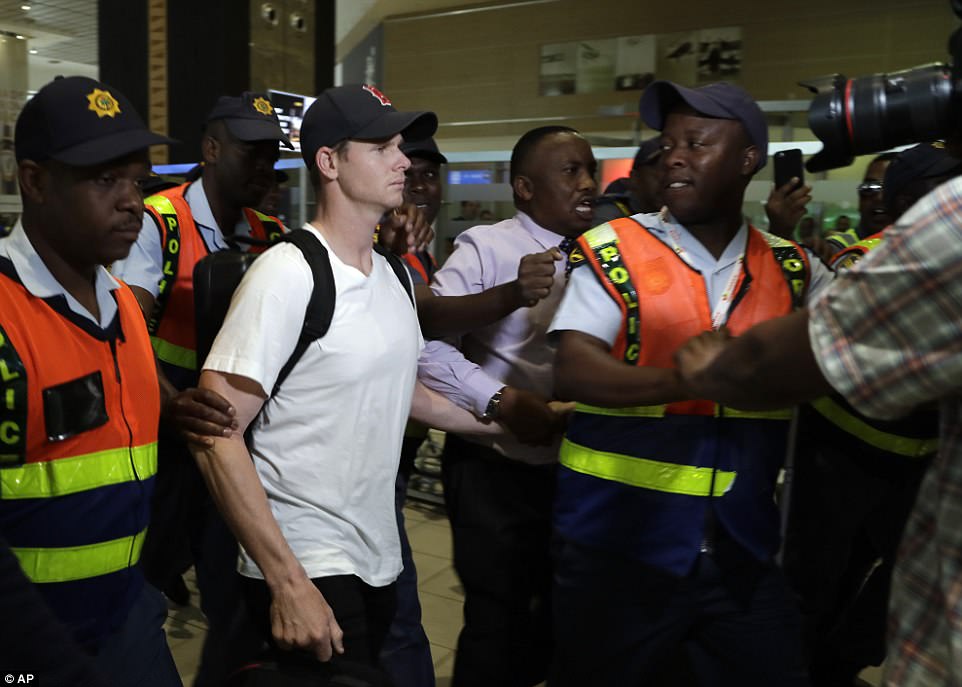 Legendary leg spinner Shane Warne said of the dramatic footage: ‘This is disgraceful! Steve Smith is not a criminal’

‘Regardless of your opinion of him, you can’t look at this image and say you don’t feel slightly bad for Steve Smith. I know I do.’

Legendary leg spinner Shane Warne added: ‘This is disgraceful! Steve Smith is not a criminal’ and former Test batsman Dean Jones said: ‘This vision is horrific… My god.’

Radio host Alan Jones said Smith was treated ‘like a mass murderer’ as he tried to board the plane home.

‘Surrounded by 12 security guards… people baying for his blood and calling him a cheat. This is too much for any 28-year-old to handle,’ he said. 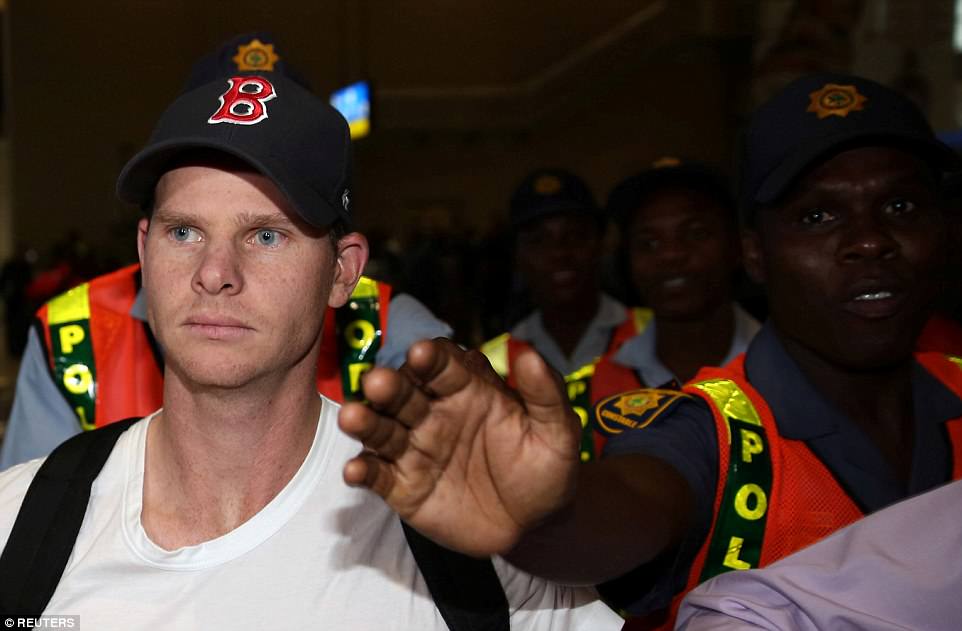 A dejected-looking Smith is escorted by police officers as he departs at the O.R. Tambo International Airport on Wednesday night 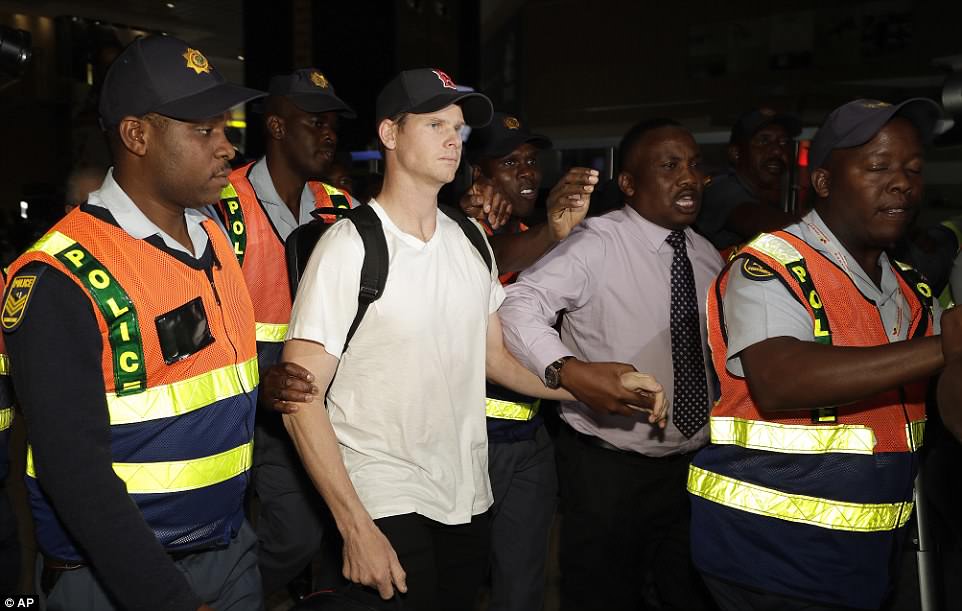 Smith is en route to Sydney, where he will face the music at a press conference late on Thursday 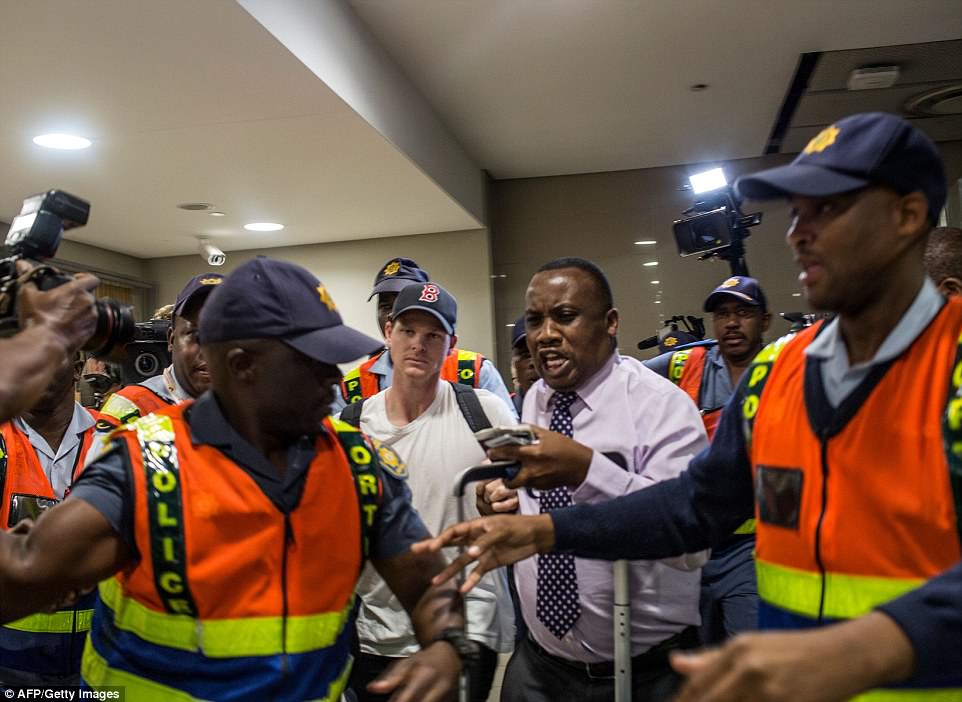 Smith is en route to Sydney, where he will face the music at a press conference late on Thursday.

The 28-year-old remains shattered but is desperate to rebuild his image, return Australia to the top of world cricket, and reclaim the captaincy.

‘He’s got a very steep hill to climb to rebuild the confidence and faith of the Australian public,’ Cricket Australia CEO James Sutherland said, when asked if Smith could potentially lead the side again.

‘The public and the board, who approve the captains of the Australian teams, are the ones who will decide that or not. He’s got that opportunity. 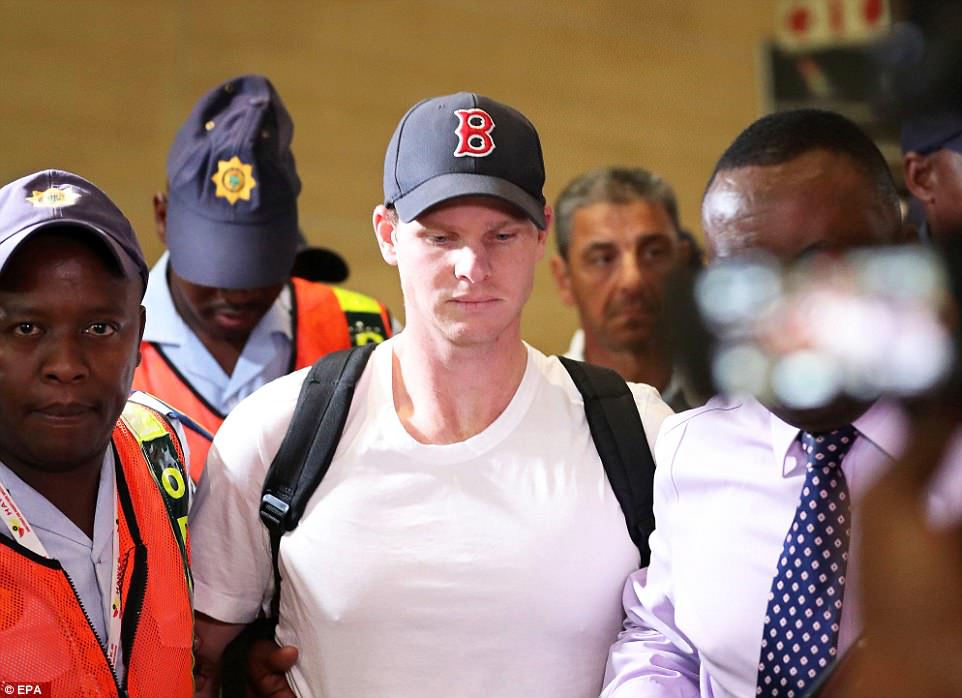 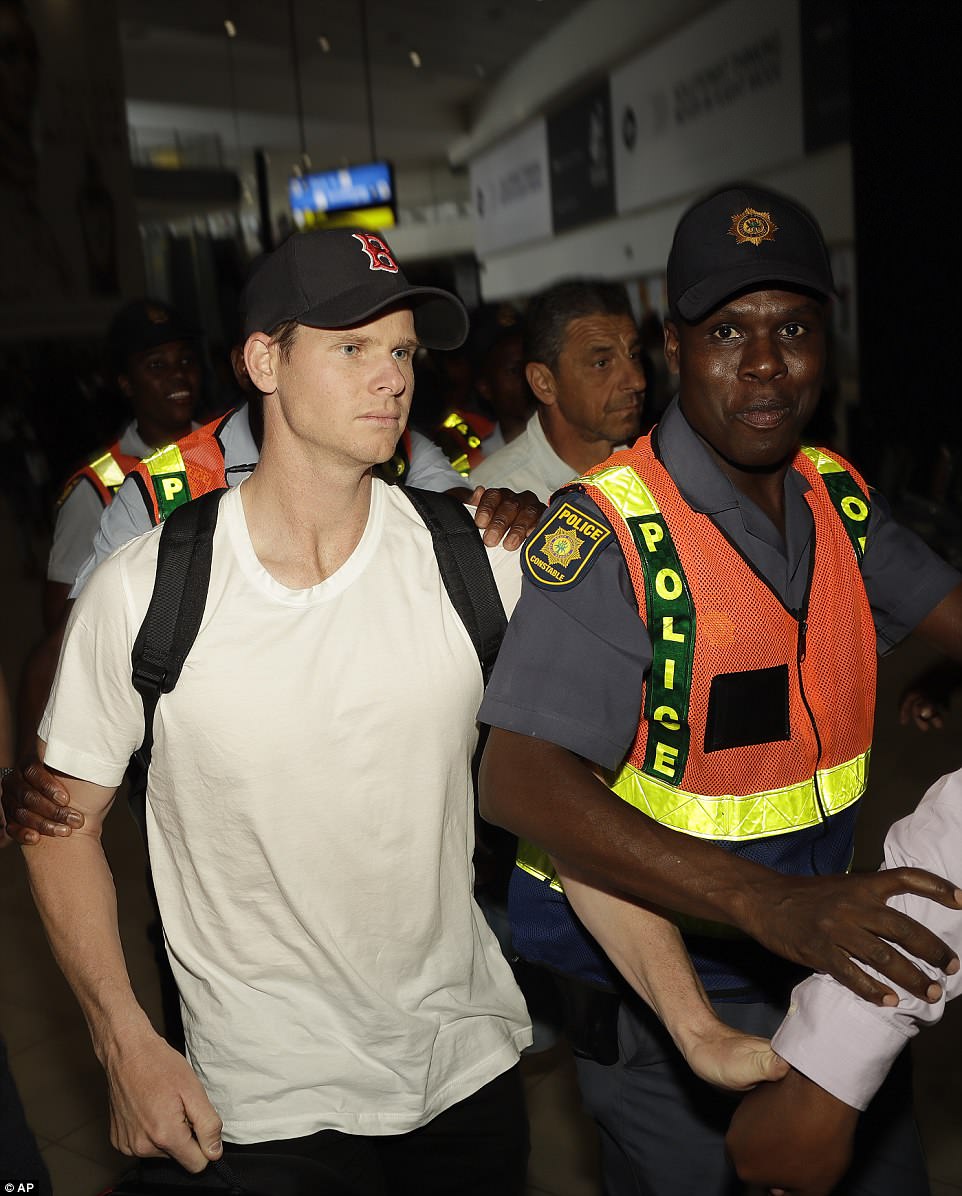 The 28-year-old remains shattered but is desperate to rebuild his image, return Australia to the top of world cricket, and reclaim the captaincy 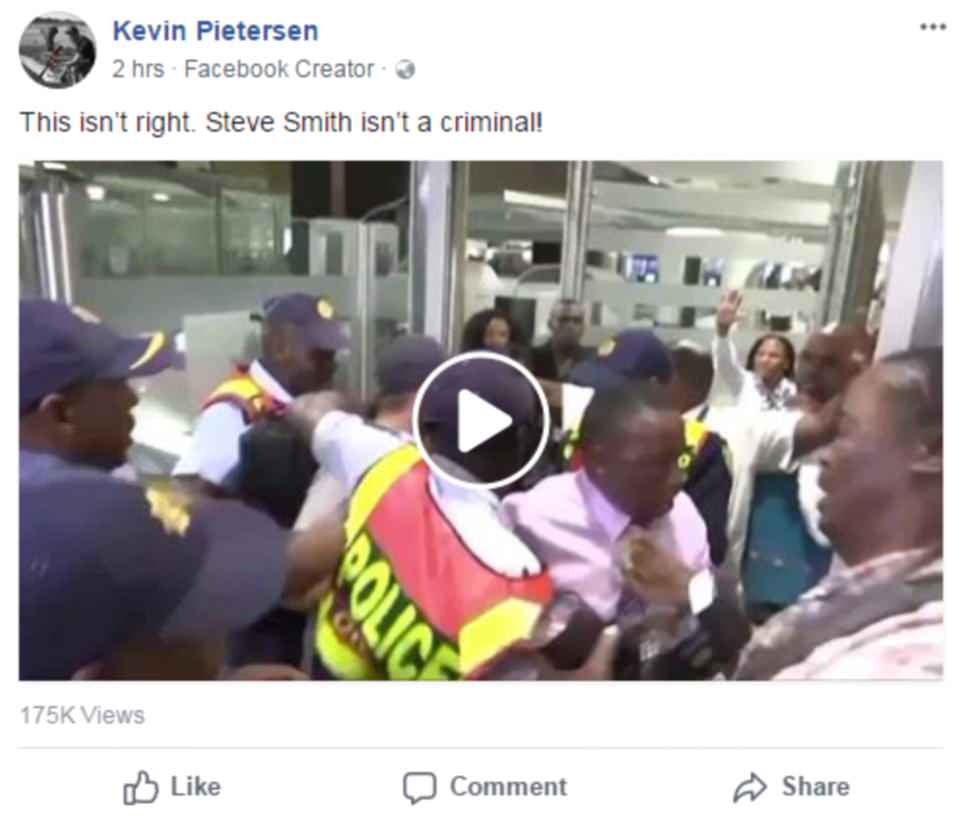 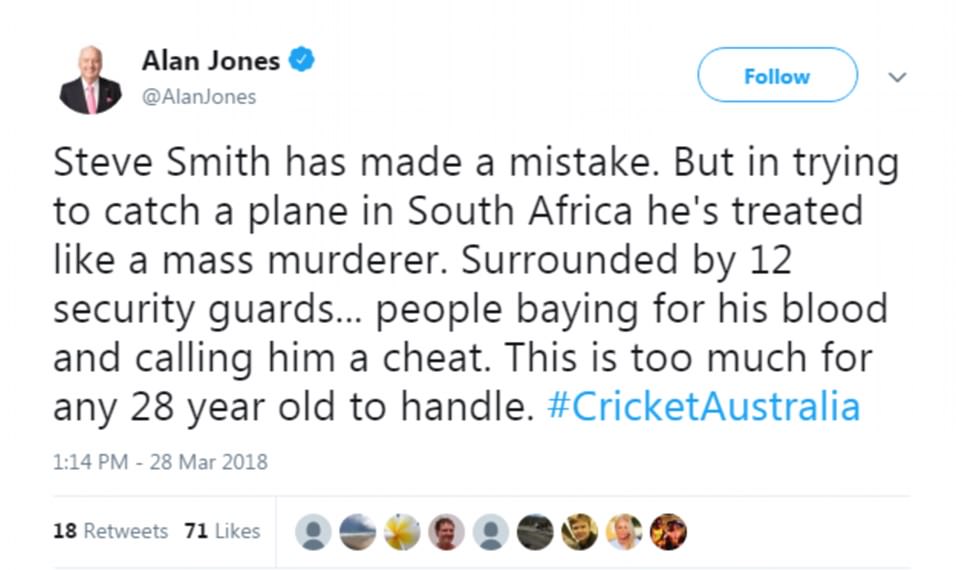 ‘When we were talking about the [100 hours of] community service [that form part of the sanctions] and working at club cricket, he said with a smile on his face ”I’ll be doing that anyway”, which I think says a lot about him.’

Coach Darren Lehmann is confident Smith will return to international cricket a better person after a year-long ban.

‘We’ve lost a great young man [as captain],’ Lehmann said. ‘We all love him, the public love him. At the moment obviously it’s hard for him and his family.

‘To see the hurt in him over the last three or four days, I’ve spent a lot of time with him … you feel for him. He’s going to come back a better person, there’s no doubt about that.’ 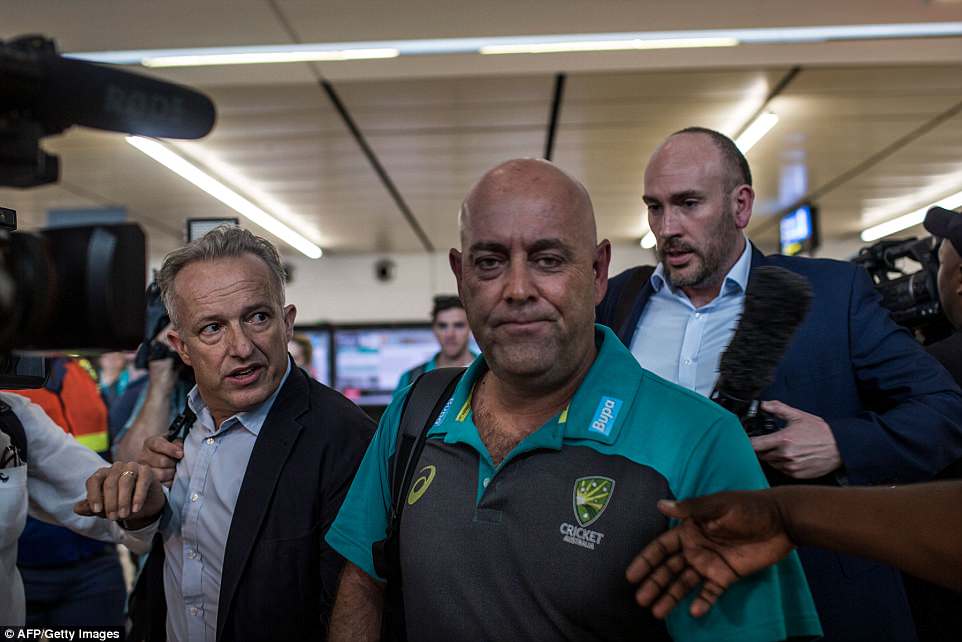 Coach Darren Lehmann is confident Smith will return to international cricket a better person after a year-long ban. He was spared by the investigation 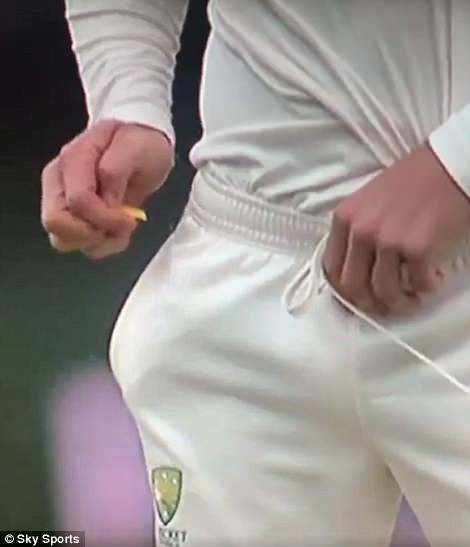 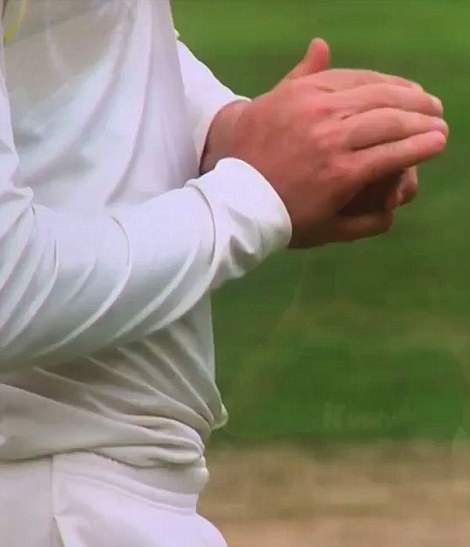 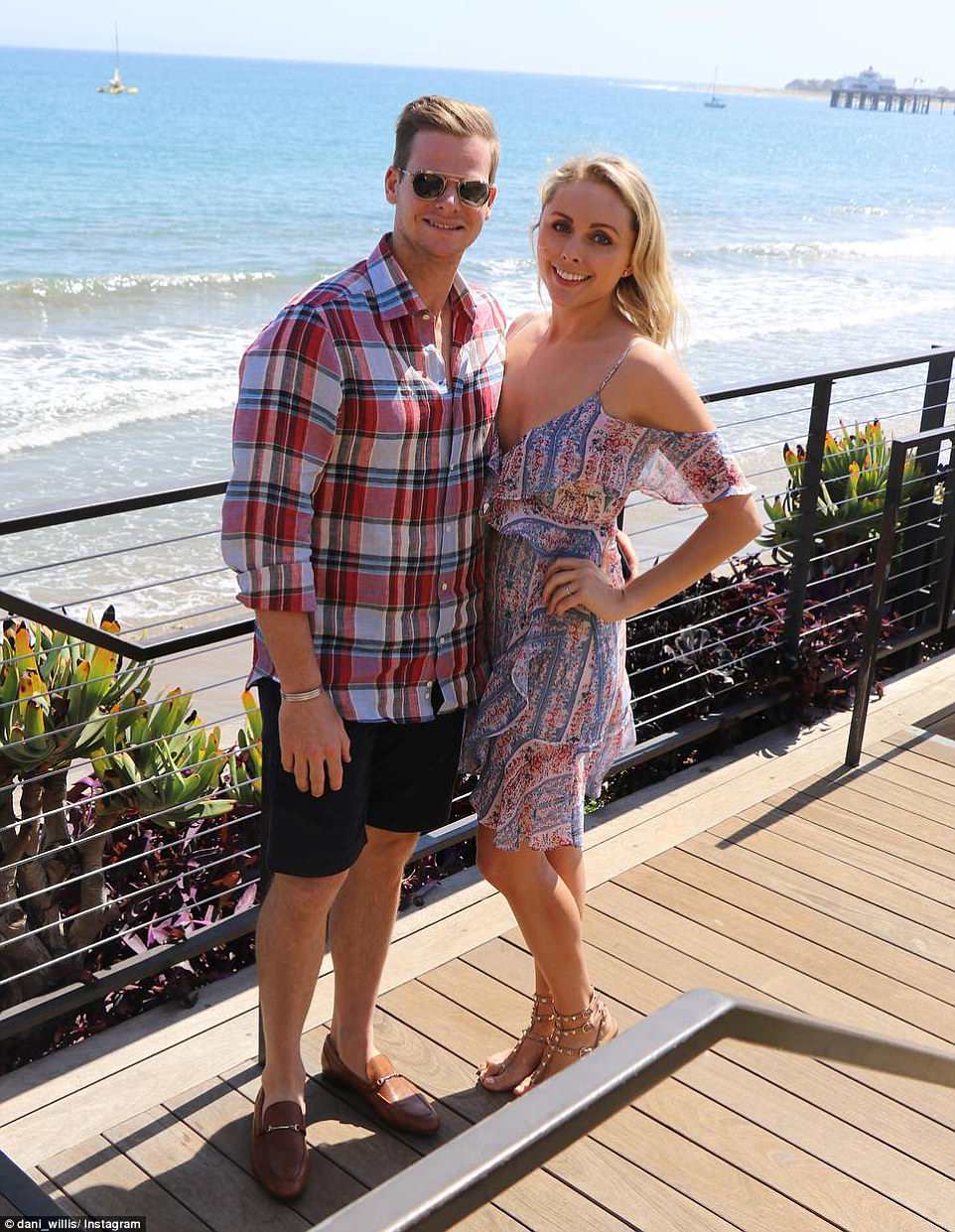 Smith (pictured with fiancee Dani Willis) and Warner were sanctioned for their roles in the ball tampering scandal, which has embroiled Australian cricket since Saturday 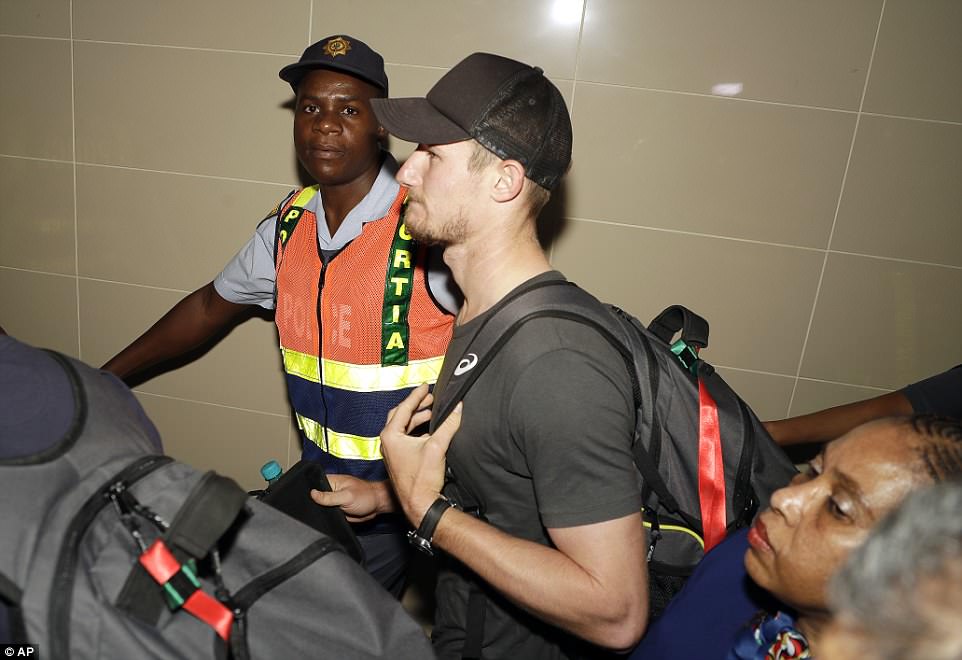 Smith and his vice-captain David Warner were hit with 12-month bans from all international and domestic cricket after a Cricket Australia investigation.

Cameras caught the 25-year-old attempting to scuff the ball after lunch on day three of the third Test in Cape Town, a ploy that Smith later admitted he and ‘the leadership group’ had given the green light to.

CA’s sanctions dictate Warner will never hold another leadership position, but Sutherland denied the opener’s cards had been privately marked and he would never play international cricket again.

Smith will not be be able to captain Australia for a further year after returning to cricket. 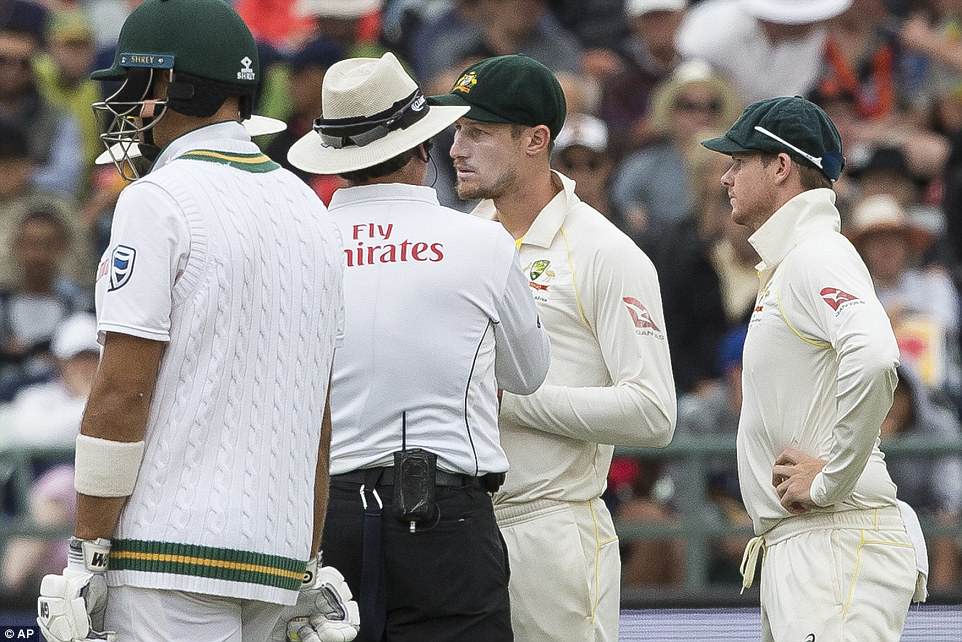 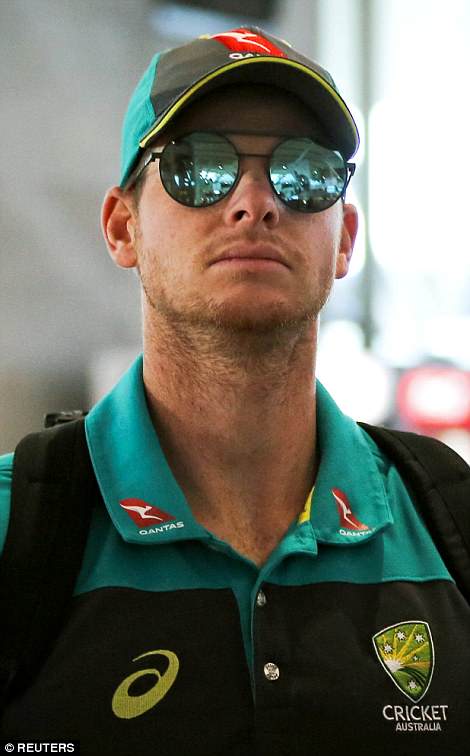 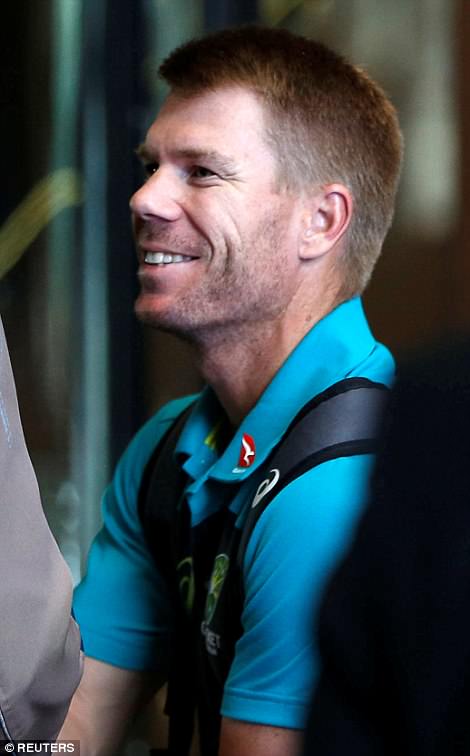 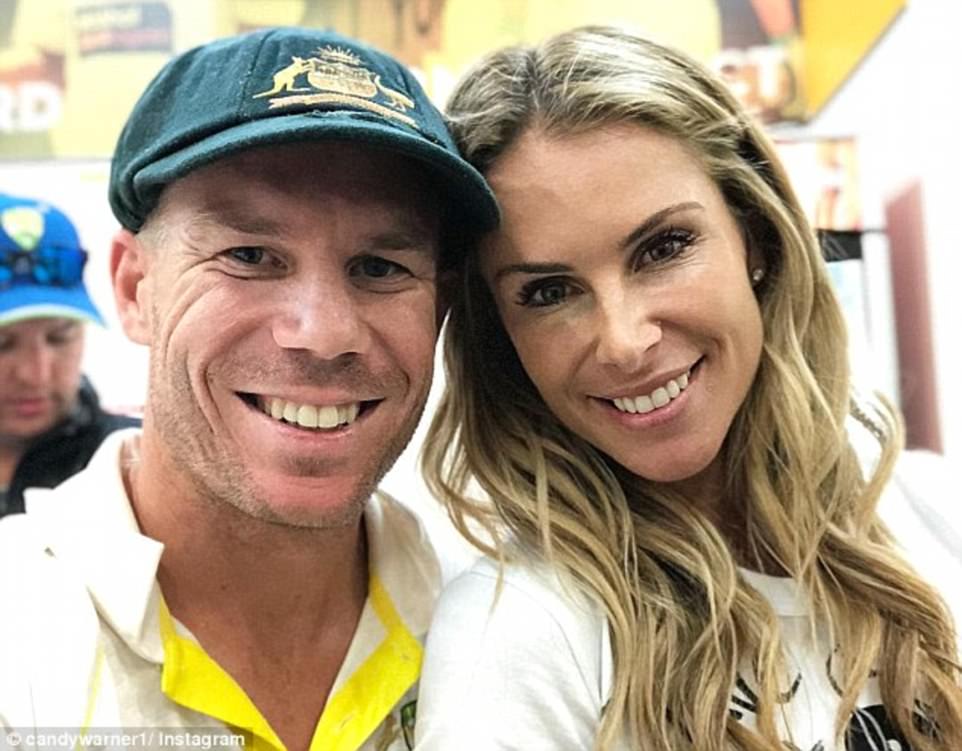 In a statement issued by Cricket Australia, the charge sheet revealed Warner was the instigator of the disastrous plot to use sandpaper to change the condition of the ball.

The investigation revealed Warner was the one responsible for ‘development of a plan to attempt to artificially alter the condition of the ball’.

The 12-month bans for Smith and Warner means both batsmen will be free to play in the next Ashes series and the 2019 Cricket World Cup.

Shane Warne said Cricket Australia has erred in its response to the scandal and suggested the governing body caved to public ‘hysteria’ in handing out the year-long bans. 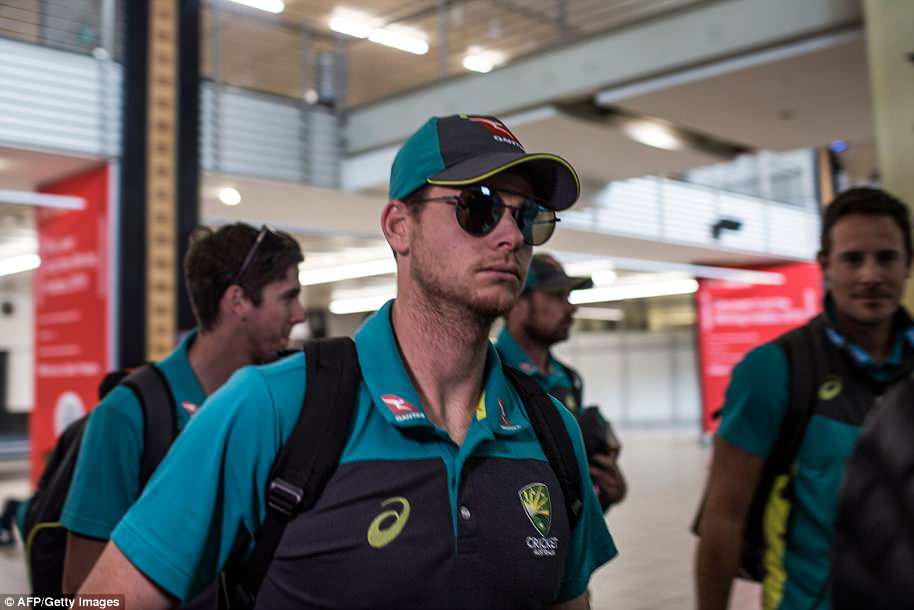 ‘I won’t be considering stepping down. I still think I’m the right the person for the job,’ Australia skipper Steve Smith said on March 24

MARCH 24: A four-Test series between Australia and South Africa is locked at 1-1, with the third Test in the balance on day three. The host broadcaster captures footage of Cameron Bancroft shining the ball with a yellow piece of tape then attempting to hide the evidence in his pants.

All hell breaks loose when Steve Smith fronts reporters after play, confessing it was a pre-mediated plan.

‘I won’t be considering stepping down. I still think I’m the right the person for the job,’ Australia skipper STEVE SMITH.

Day four resumes at Newlands, where Australia capitulate in a record-breaking loss of 322 runs.

‘It seemed completely beyond belief that the Australian cricket team had been involved in cheating,’ Prime Minister MALCOLM TURNBULL.

‘I reckon every cricketer’s probably done it throughout their career in grade cricket or whatever level, but obviously not to that extent …. he hasn’t murdered anyone,’ Australia batsman CHRIS LYNN.

MARCH 27: Roy and Howard fly to Johannesburg and brief Sutherland. The investigation is ongoing but CA’s bigwigs are satisfied Smith, Warner and Bancroft were the only members of the touring partying who knew of the illegal plan.

CA’s board and Sutherland speak via teleconference, confirming Tim Paine will become the nation’s 46th Test skipper in the fourth Test against South Africa.

Smith officially remains captain but that title could be stripped when sanctions are finalised within the next 24 hours. An exhausted Sutherland fronts a press pack of almost 50 for approximately 20 minutes, confirming the disgraced trio are being sent home and Darren Lehmann remains coach.

‘We are contemplating significant sanctions in each case. These sanctions will reflect the gravity with which we view what has occurred and the damage it has done to the standing of Australian cricket,’ Cricket Australia chief executive JAMES SUTHERLAND. 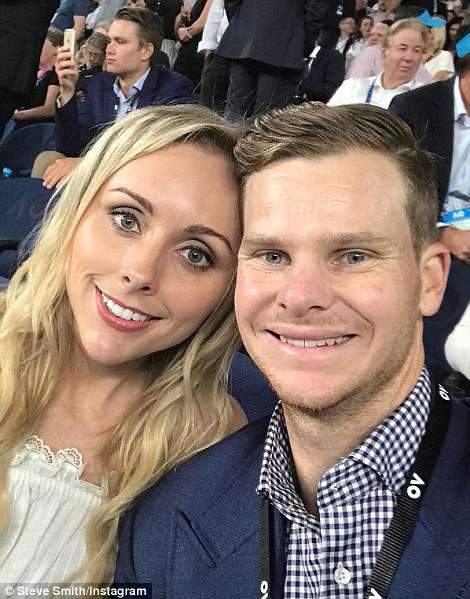 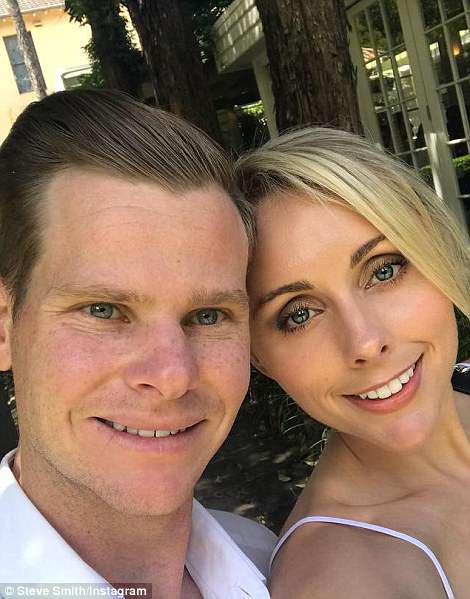 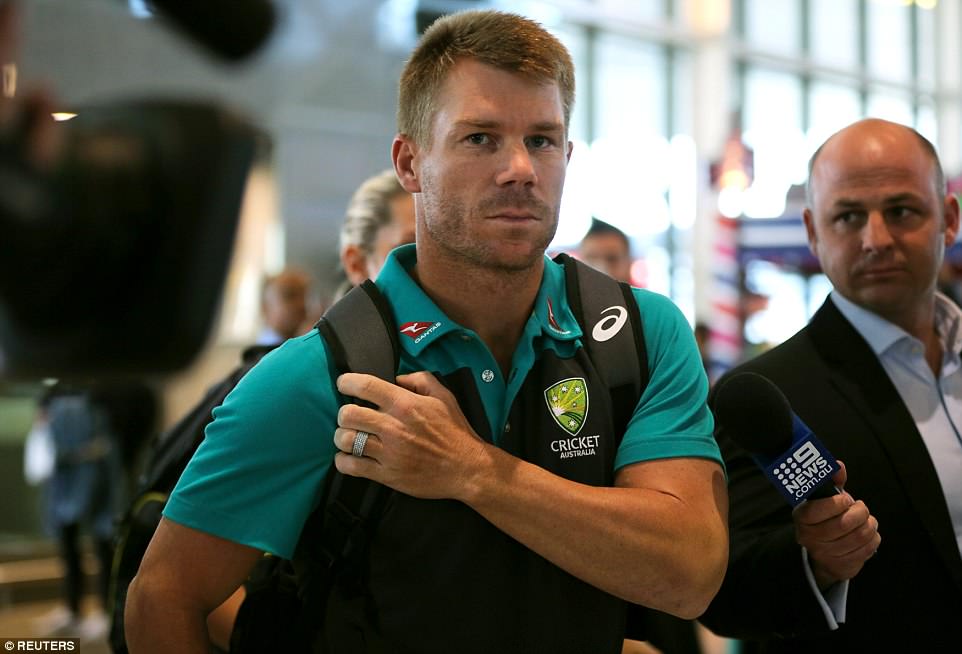 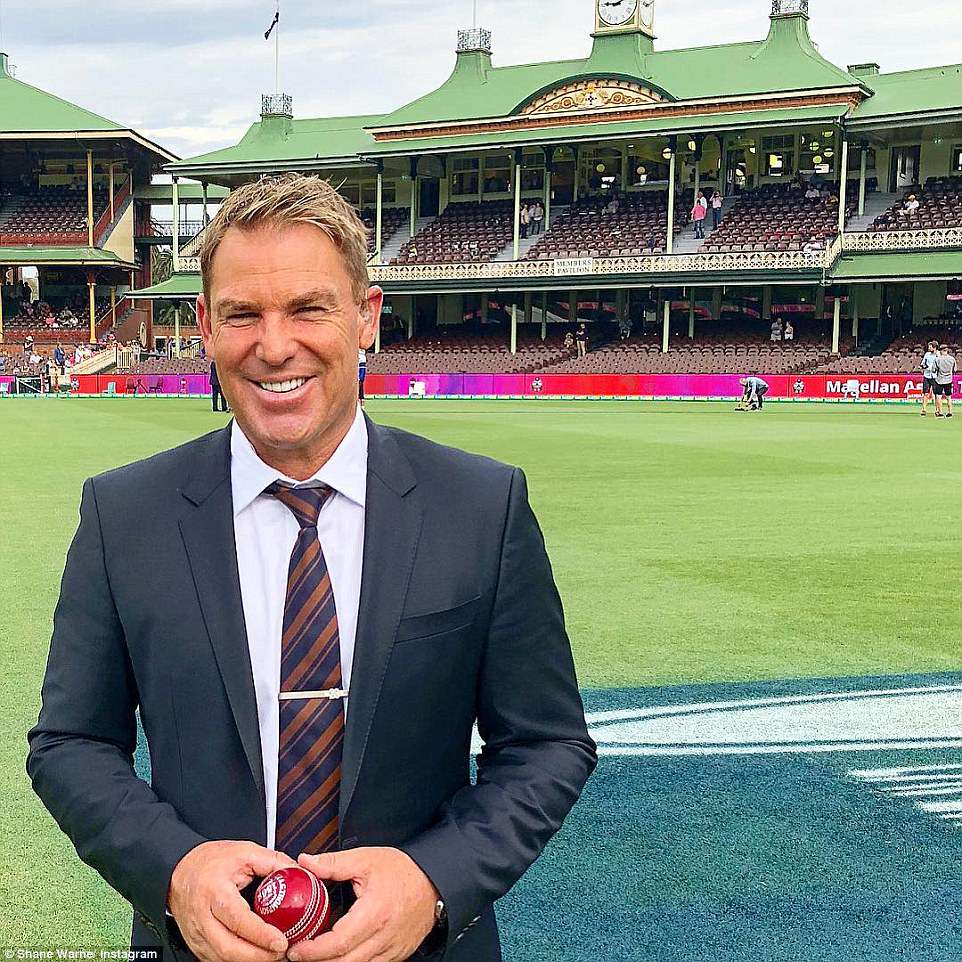 Warne, who was forced to undertake a 12-month road to redemption in 2003 after testing positive for a banned substance, feels CA was too harsh.

‘Their actions were indefensible, and they need to be severely punished,’ Warne wrote on his official Facebook page.

‘But I don’t think a one year ban is the answer. My punishment would have been to miss the fourth Test match, a huge fine, and be sacked as captain and vice-captain.

‘There is no way you can condone it … but the jump to hysteria is something that has elevated the offence beyond what they actually did. Maybe we’re at a point where the punishment just might not fit the crime.’ 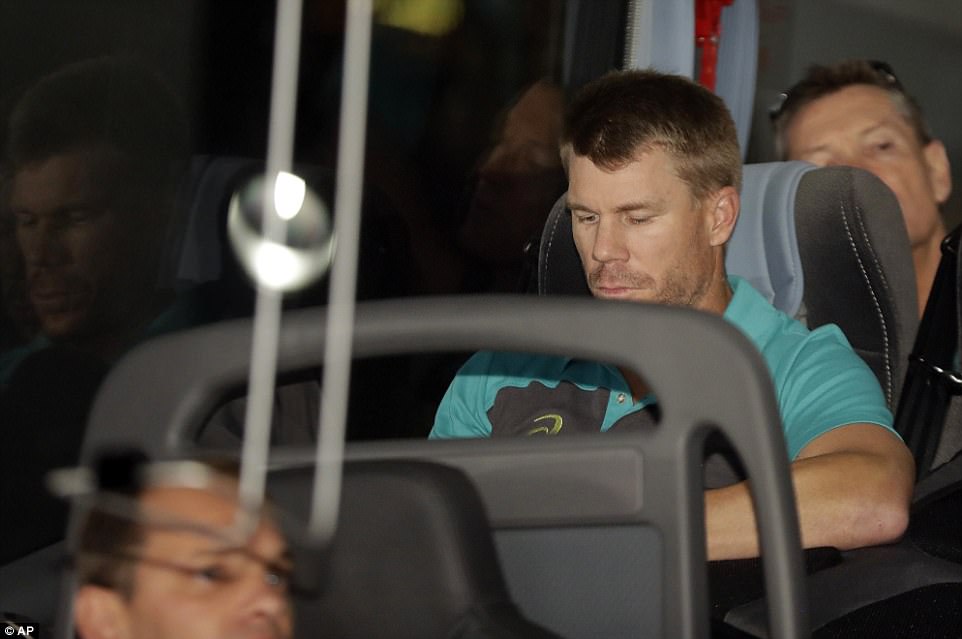 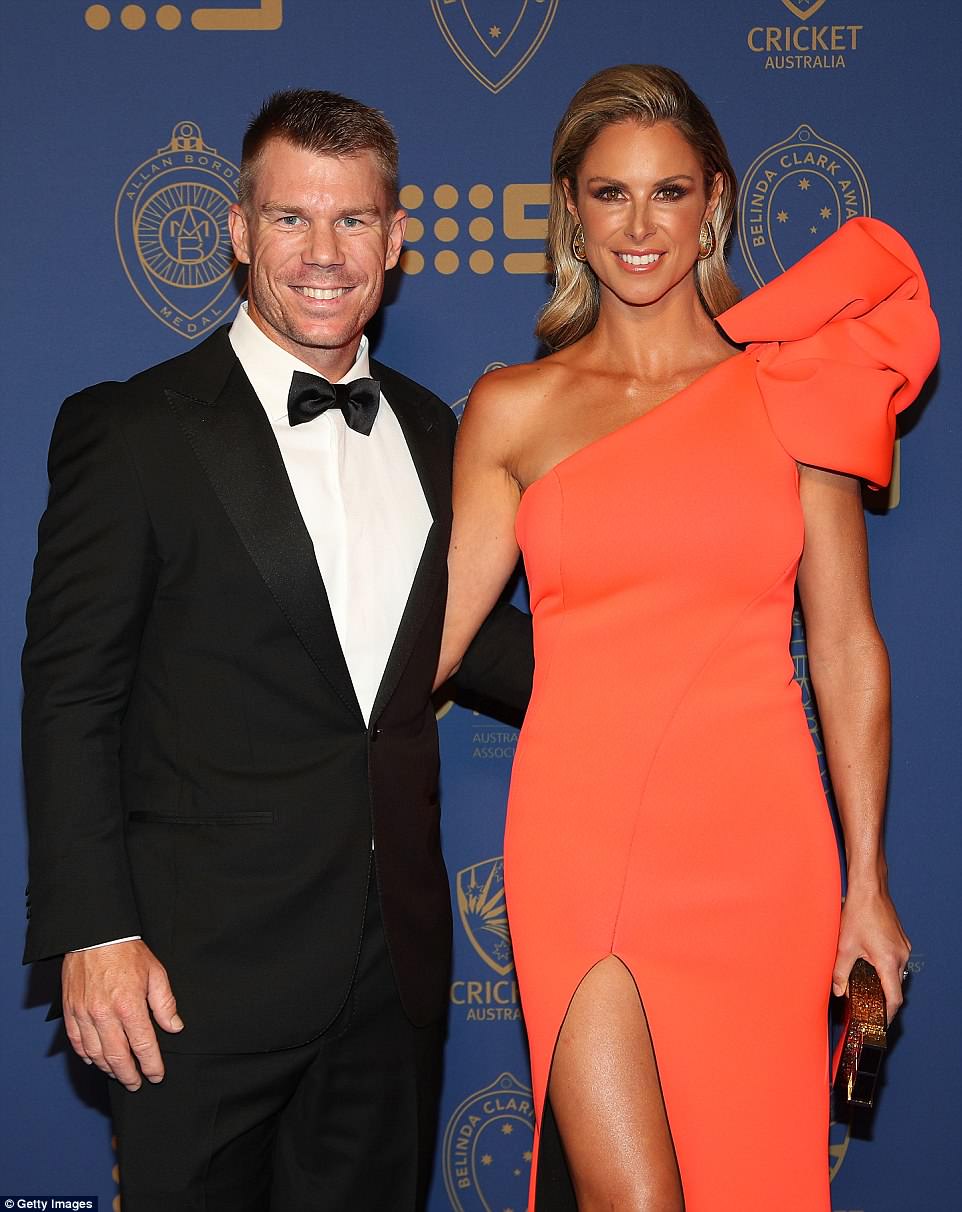 ‘When something like this happens, you definitely feel sympathy for the person it happened to,’ Amla said ahead of the fourth Test, which starts in Johannesburg on Friday.

‘The three Australians made a mistake and have had to pay the price for it. We all make mistakes, we’re not perfect.’

Warne, who took a record 708 Test wickets for his country, and Amla weren’t alone in expressing sympathy, particularly when it came to Smith.

‘Steve Smith I think is a good guy who made a huge mistake. He needed punishing but I think this is too harsh,’ former England captain Michael Vaughan posted on Twitter.