A smiling Cristiano Ronaldo has accepted a huge fine and suspended jail sentence for tax fraud after a deal with Spanish prosecutors.

The Portugal and Juventus star, 33, will pay a total of 18.8million euros (£16.9million) after pleading guilty at a hearing in Madrid this morning.

Ronaldo, who went to court with his girlfriend Georgina Rodriguez, also received a 23-month prison sentence but as a first-time offender for a non-violent crime he will not spend a day in jail.

His former Real Madrid team-mate Xabi Alonso is also in court on a separate tax evasion charge, which could lead to a five-year sentence that – unlike Ronaldo – may see him behind bars if he is found guilty.

Smiling all the way: Cristiano Ronaldo arrives at court in Madrid with his girlfriend Georgina Rodriguez today. He accepted a hefty fine for tax fraud during his time as a Real Madrid player 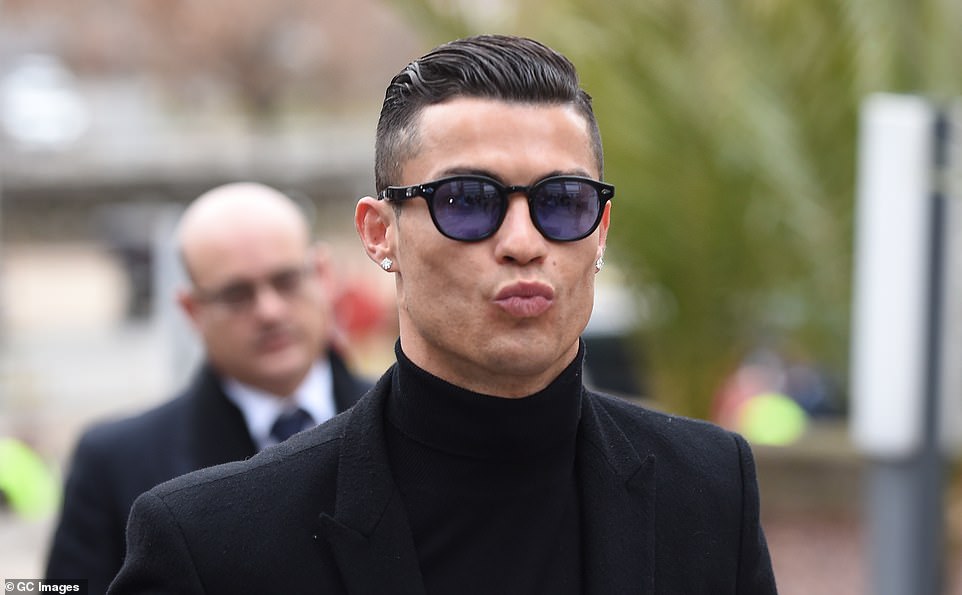 Day in court: Cristiano Ronaldo arrives at the Madrid court this morning where he accepted the deal with Spanish prosecutors over the tax fraud charges against him 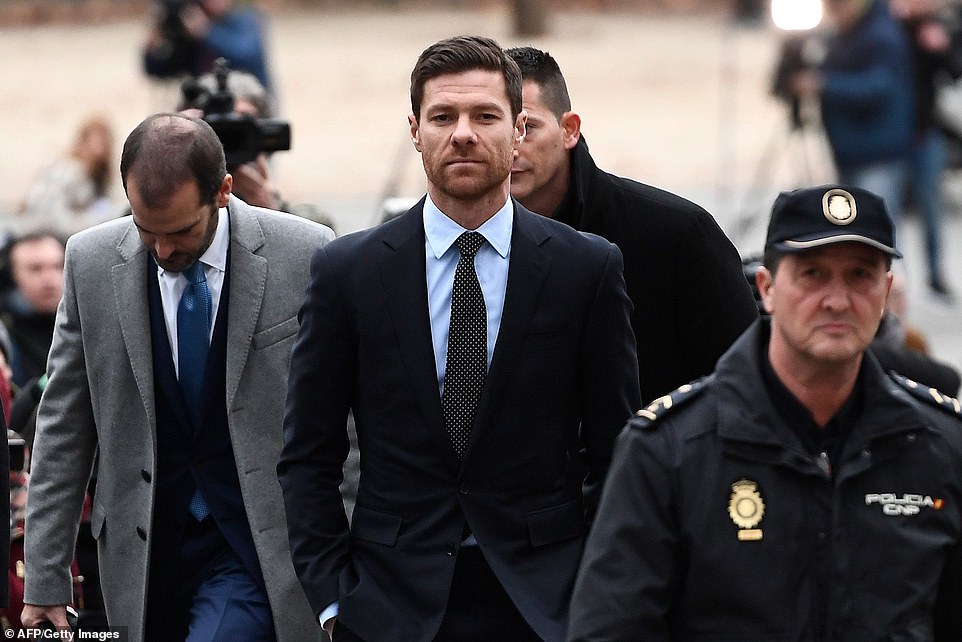 Xabi Alonso, who played with Ronaldo at Real Madrid and also had spells at Liverpool and Bayern Munich, arrives for his tax evasion trial in the Spanish capital today

Ronaldo, who left Madrid last summer to join Juventus, wore a black jacket with buttons, white trainers and dark sunglasses as he arrived at court with his girlfriend.

Ronaldo’s lawyers had asked that he be allowed to enter the building by car to avoid the media spotlight.

But the court president refused the request, saying that despite his ‘great fame’, he would not ‘compromise security’ at the building.

The former Manchester United forward’s request to appear via video conference was also denied, so he walked up the court steps today and even signed autographs.

The court appearance lasted around 40 minutes as the deal was officially presented to the judge, who will confirm the final sentence later on Tuesday.

He will avoid prison time as sentences of up to two years are generally not enforced in Spain for first-time offenders in non-violent crimes.

Madrid prosecutors opened a probe into Ronaldo in June 2017, when he was still based in the Spanish capital, and he was questioned in July that same year.

Prosecutors accused him of having used companies in low-tax foreign jurisdictions – notably the British Virgin Islands and Ireland – to avoid having to pay the tax due in Spain on his image rights between 2011 and 2014.

They alleged in the indictment that the Portuguese forward used the business structure solely to ‘obtain an illicit tax benefit.’ 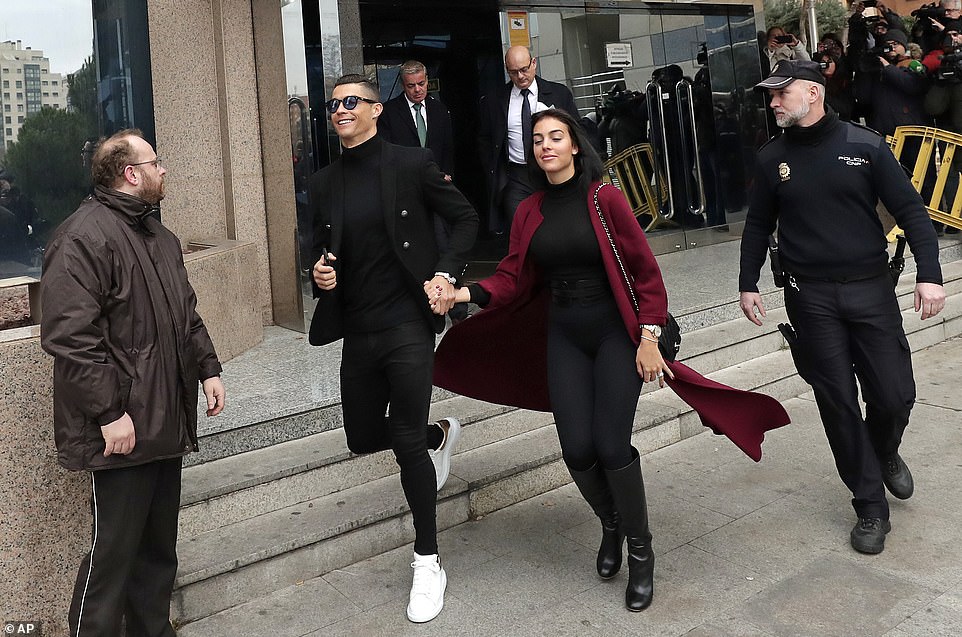 All over: Ronaldo and his girlfriend leave the court after the short hearing on Monday morning in which the Portuguese forward accepted a fine and a suspended prison sentence 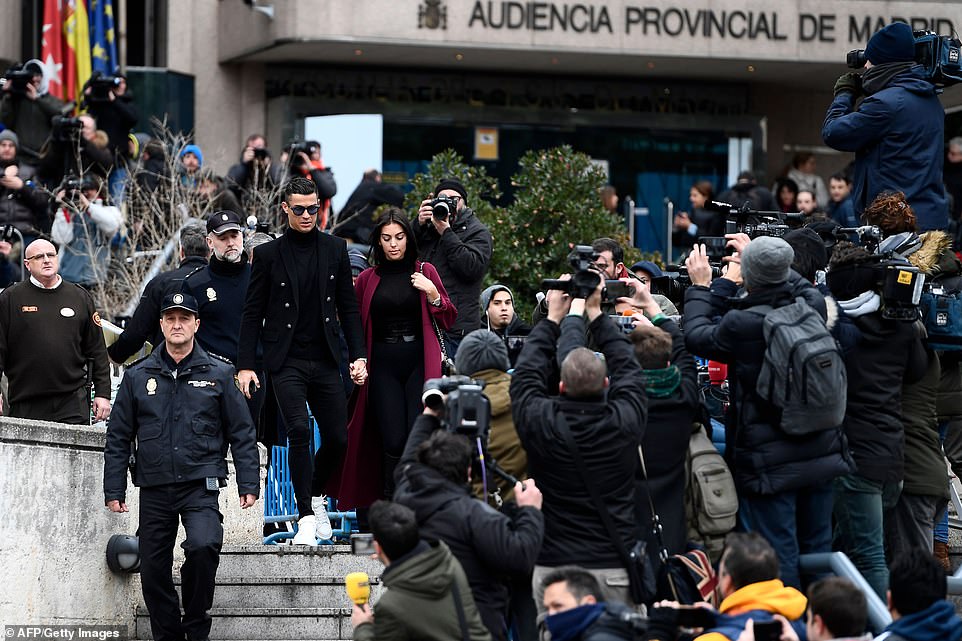 Media scrum: Ronaldo holds hands with his girlfriend as they leave the Madrid court on Tuesday morning, after the Portugal forward accepted a deal with Spanish prosecutors which will cost him £16.5million 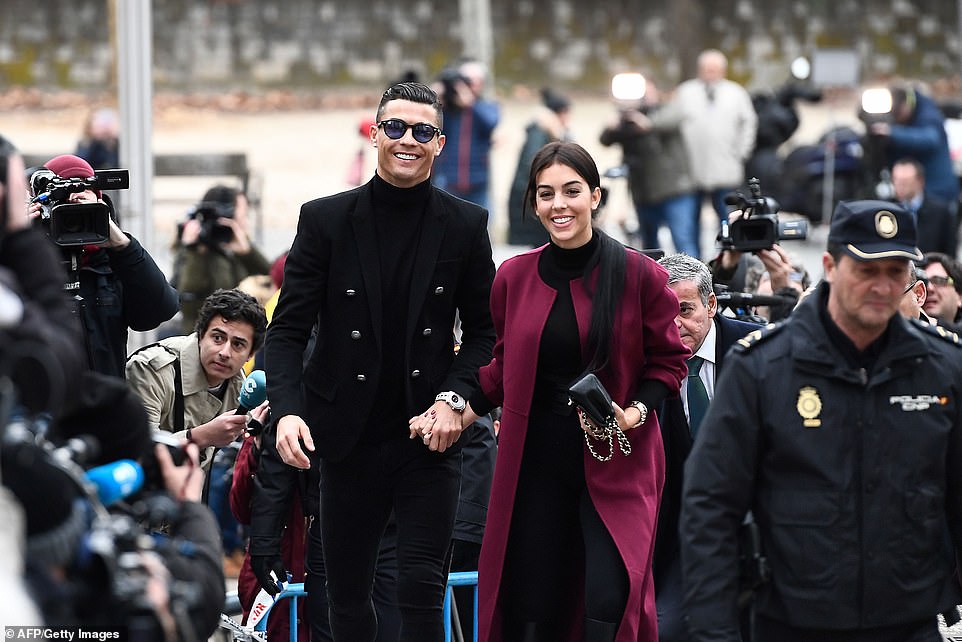 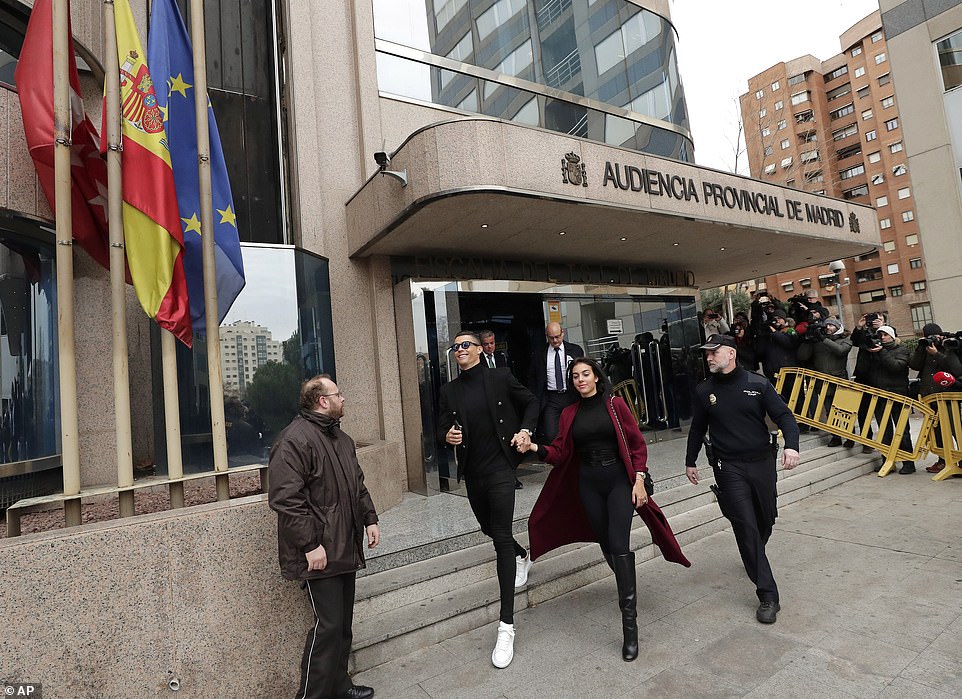 Time to go home: Ronaldo and his girlfriend hurry away from the Madrid court this morning. The footballer’s request to appear by video conference was denied 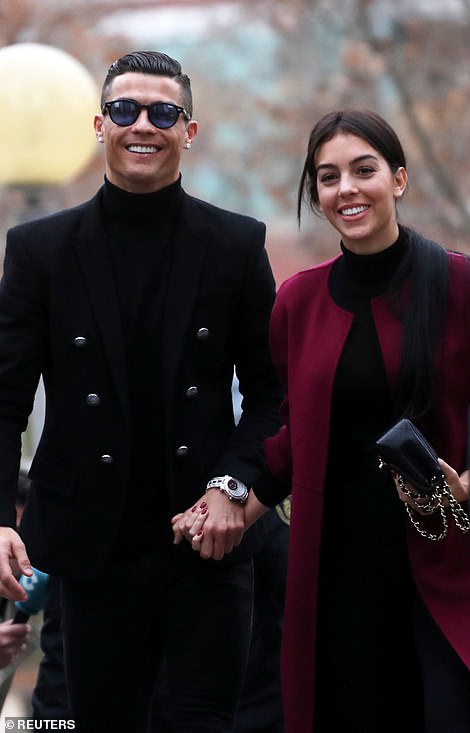 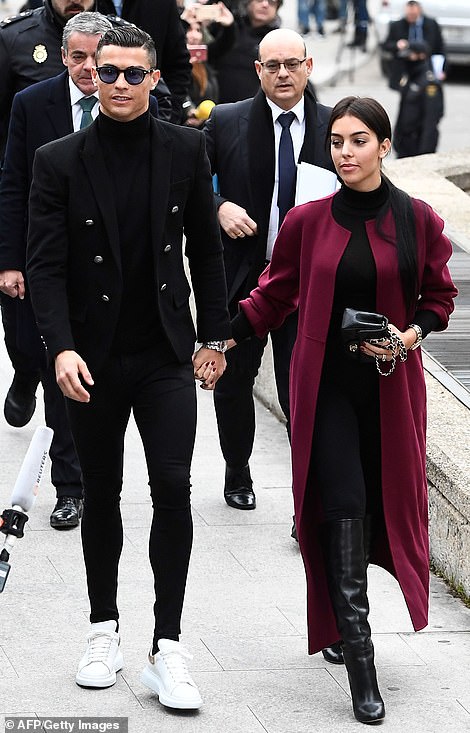 Ronaldo, pictured arriving at court with his girlfriend today, will not serve any prison time as sentences under two years are not usually enforced for first-time non-violent offenders 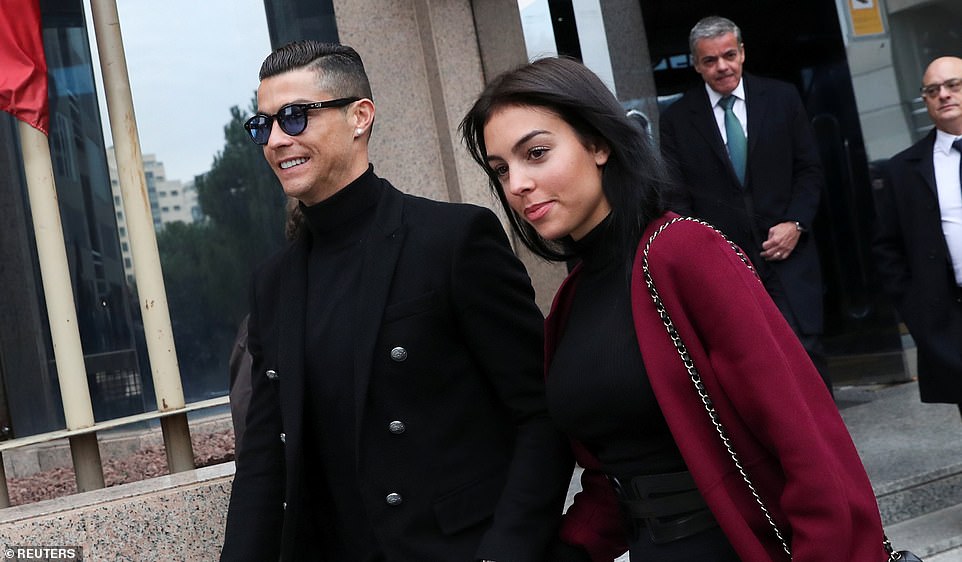 Free man: The former Real Madrid and Manchester United player leaves court after ensuring he will not spend any time behind bars for tax fraud

Madrid prosecution sources said: ‘The Provincial Prosecutors’ Office of Madrid is seeking a 23-month prison sentence for Cristiano Ronaldo Dos Santos Aveiro for the commission of four crimes against the Public Treasury relating to Personal Income Tax for the tax years 2011 to 2014 inclusive. 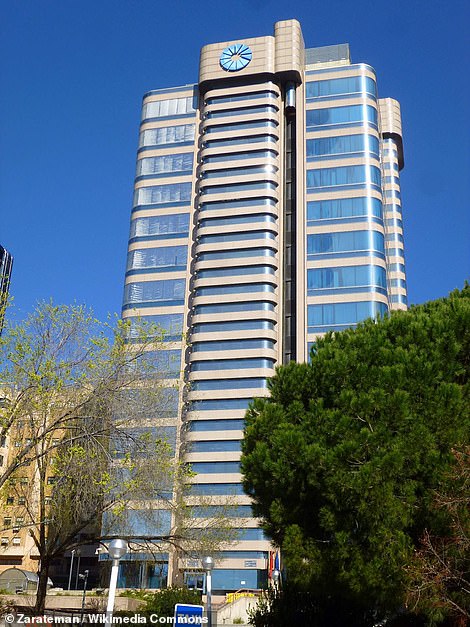 ‘Over those four years prosecutors say the footballer deprived the Public Treasury out of 5,717,174 euros (£5.3 million).’

Ronaldo subsequently paid what he owed in unpaid tax along with a six-figure sum to cover the interest.

The deal between Spain’s taxman and his lawyers has allowed Ronaldo to avoid a long trial that could have seen him handed a heftier sentence.

While in Spain he became Real Madrid’s highest ever goalscorer, netting 451 times after joining from Manchester United for a then-record £80million in 2009.

He helped Real win three consecutive Champions League titles in 2016, 2017 and 2018. He is also Portugal’s most-capped player, with 154 appearances, and record goalscorer, with 85.

Alonso, who joined Real Madrid from Liverpool and later played for Bayern Munich, is facing a greater risk of jail time.

Public prosecutors are demanding that Alonso be handed a five-year jail sentence and pay a fine of four million euros.

Barcelona’s Lionel Messi, once Ronaldo’s big La Liga rival, paid a two-million-euro fine in 2016 in his own tax wrangle and received a 21-month jail term.

The prison sentence was later reduced to a further fine of 252,000 euros, equivalent to 400 euros per day of the original term.

The recent crackdown on high-profile footballers follows the removal of a tax exemption in 2010. Known as the ‘Beckham law’ after former Madrid player David Beckham, it had allowed footballers to curb their taxes. 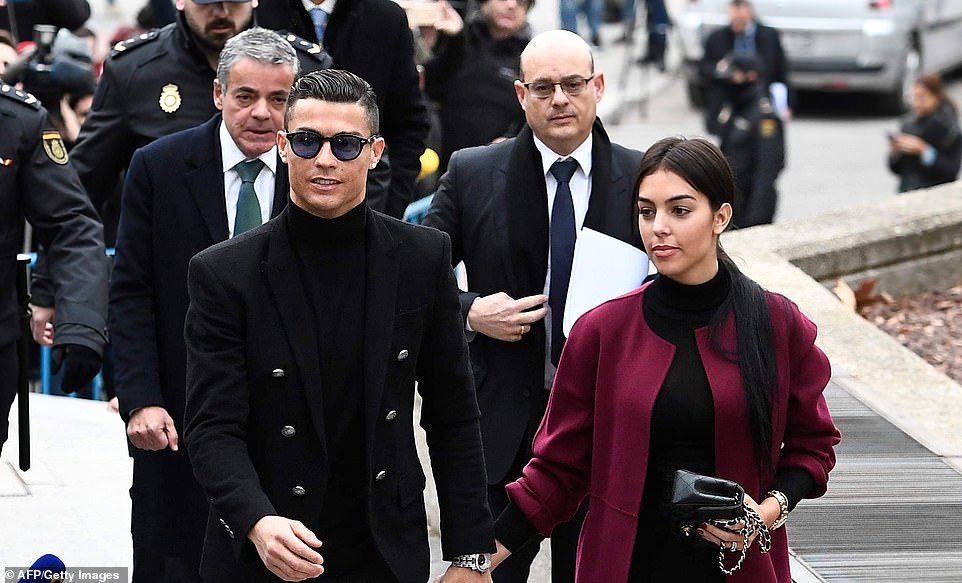 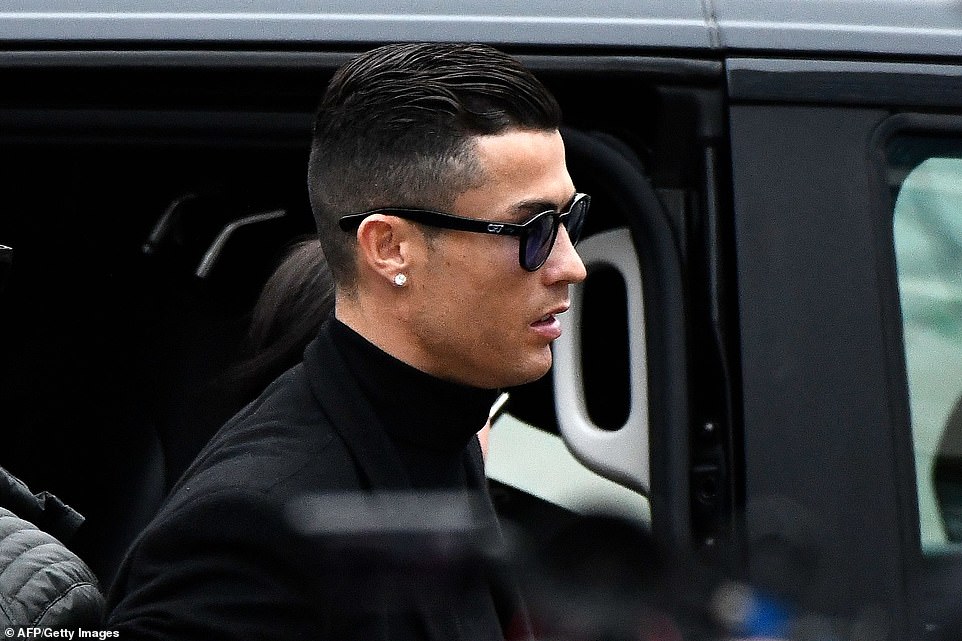 All black: Ronaldo arrives at the Madrid court this morning for the hearing where he pleaded guilty to tax fraud and his sentencing deal with Spanish prosecutors was confirmed 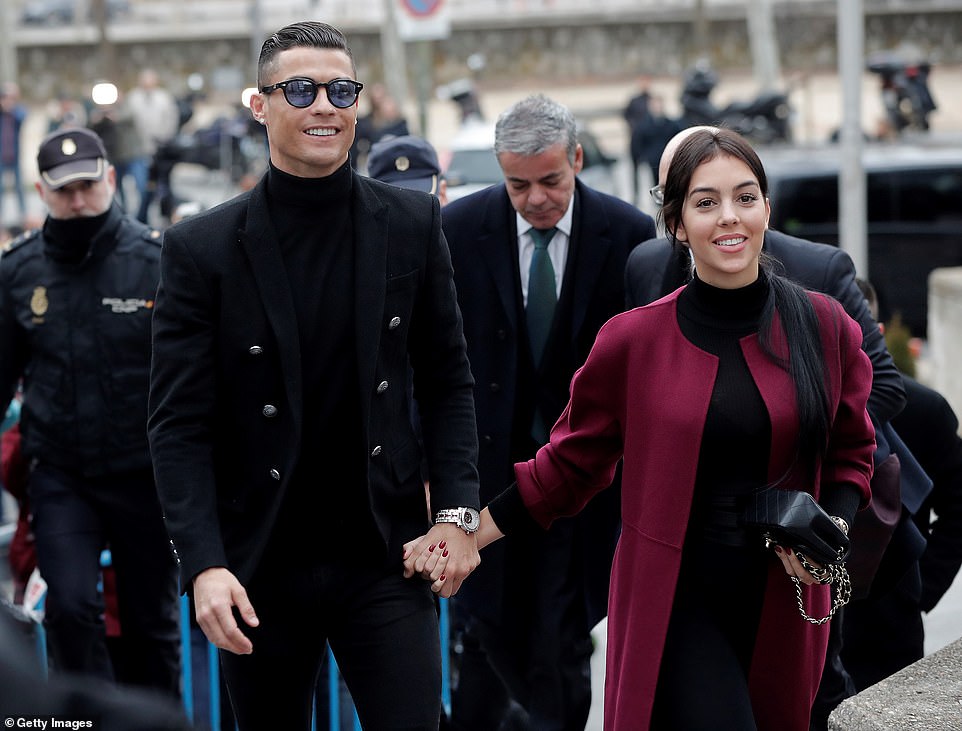 All smiles: The Portuguese footballer, who is the most-capped player and record goalscorer for his country, arrives at court where he agreed to the deal with Spain’s prosecutors 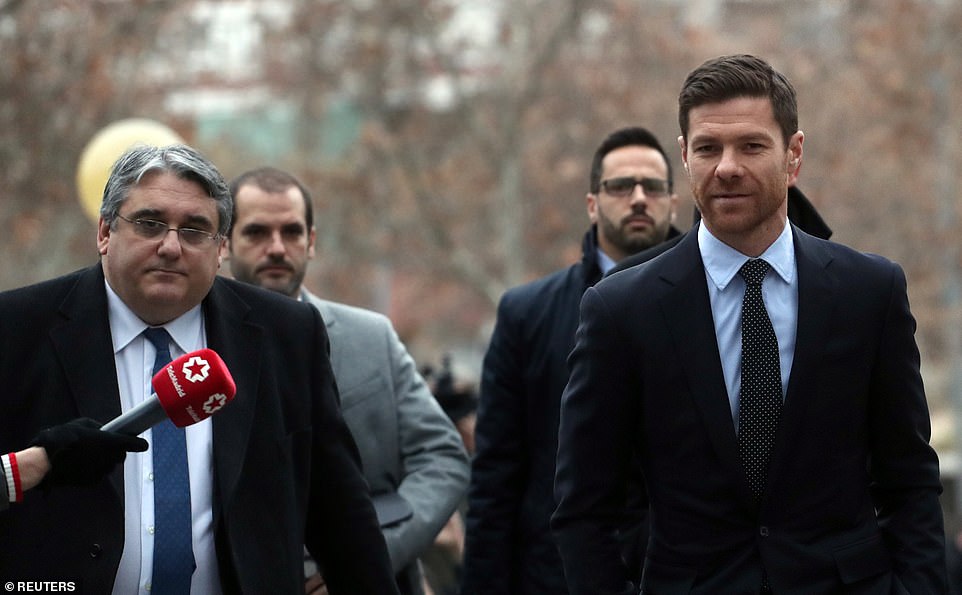 Also accused: A reporter holds a microphone to Xabi Alonso as the former Real Madrid midfielder arrives in court to face his own tax evasion charges 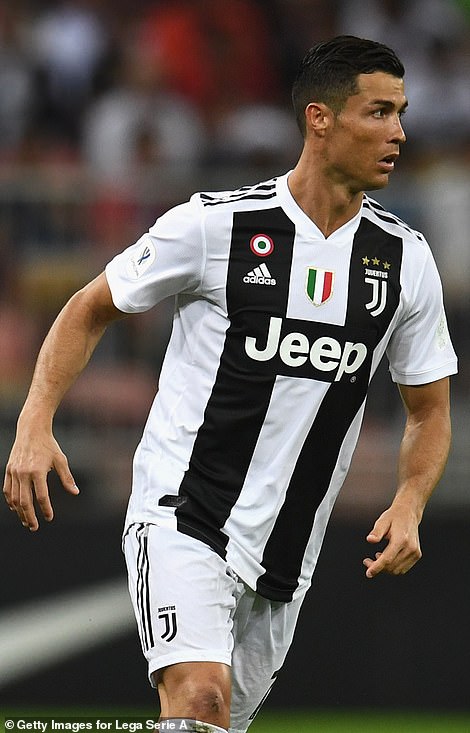 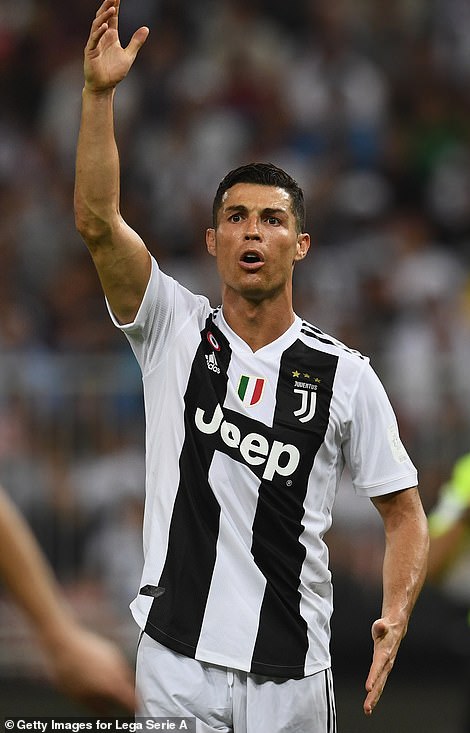