Cristiano Ronaldo could miss both Champions League matches against Manchester United after being sent off on his debut in the competition for Juventus.

The 33-year-old was dismissed during the first half of last night’s Group H opener in Valencia following an off-the-ball clash with defender Jeison Murillo and had to be led away from the field in tears.

Ronaldo now faces a minimum two-match ban for violent conduct, which would rule him out of his return to Old Trafford on October 23.

A three-game suspension would also keep him out of the tie in Turin on November 7.

However, there is a chance Juventus could appeal against the decision, especially as replays suggested he was harshly treated by the officials.

Ronaldo tangled with Murillo as they entered the penalty area in the 29th minute and his opponent fell to the floor. Ronaldo’s hand then made contact with Murillo’s head and the Valencia players immediately protested to the fifth official behind the goal.

Referee Felix Brych consulted with his colleague before producing the red card for Ronaldo, who reacted by collapsing to the turf in disbelief.

The Portugal forward – who joined Juventus from Real Madrid in the summer – had never been red-carded in 153 previous Champions League games.

Ferdinand felt the footage was not clear and there were grounds for Juventus to appeal the initial decision.

Ferdinand said: ‘It’s inconclusive I think, I’m sure Cristiano and Juventus will appeal that. The emotion you see here after the decision is clear, it means he’ll miss Old Trafford as well. Cristiano can be temperamental, he could bite at things some times in the dressing room.’

However, Scholes felt the Juventus forward deserved the red card.

Scholes said: ‘It’s a tough one to appeal. It looks like he has a couple of nibbles, a kick there, raises his left elbow. If that goes to appeal I think he’ll struggle. There’s a bit of a snap in Ronaldo definitely.’ 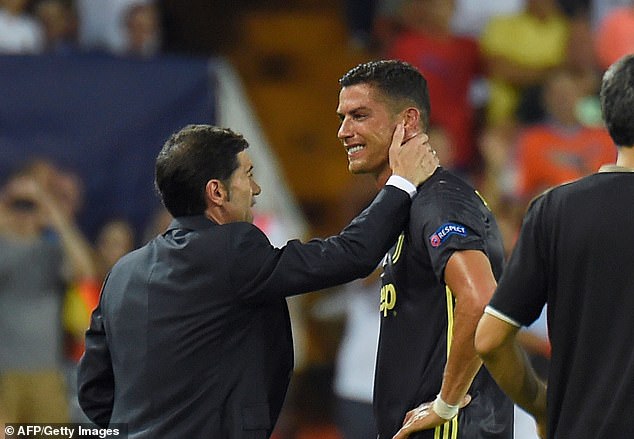 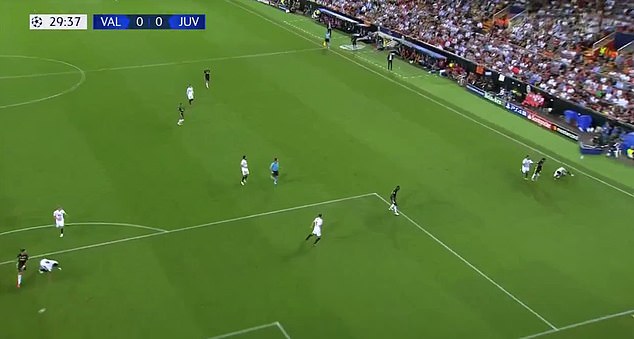