‘He didn’t even have the DIGNITY to congratulate them’: Cristiano Ronaldo slammed by Didi Hamann for snubbing Morocco heroes after Portugal’s World Cup exit – as pundit hails ‘graciousness in defeat’ shown by Atlas Lions after loss to France

Dietmar Haman has launched a scathing attack on Cristiano Ronaldo, suggesting he was not as ‘gracious in defeat’ in comparison to the Moroccan national side.

The Atlas Lions, who had beaten Portugal 1-0 in the quarter-finals of the 2022 World Cup at the weekend, had their inspiring campaign brought to an end tonight, succumbing to a 2-0 defeat against France.

It was heartache for the underdogs, who fell to their knees at the final whistle, distraught that they would not be progressing to the final, but according to Hamann, showed more dignity than Ronaldo, to stay on the field and congratulate Les Bleus on their victory.

‘I think they [Morocco] brought the human side back to this world cup,’ the former Germany midfielder told RTE.

‘You talk about these superstars, top players, top earners – and if you think that one of the greatest players who left the scene a week ago, [Cristiano] Ronaldo, couldn’t even congratulate them at the end of the game… 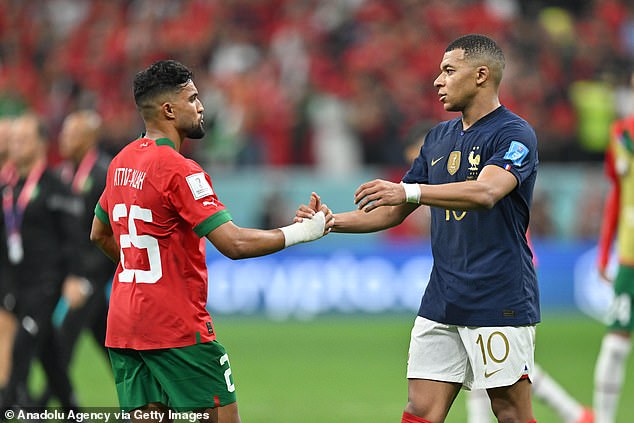 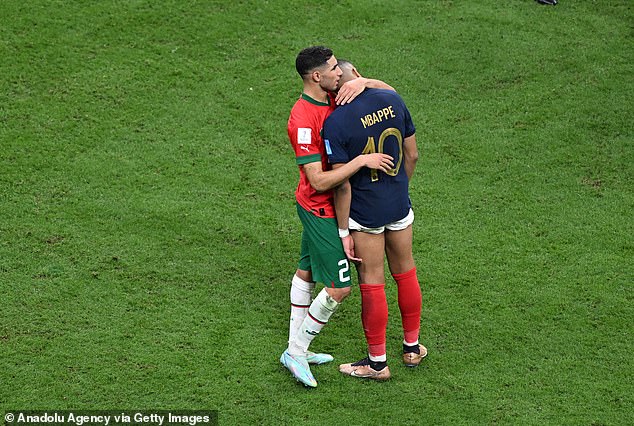 Despite losing 2-0 to Les Bleus, the Atlas Lions stayed on the field to congratulate the French

‘They won that game and did something historic and he didn’t even have the dignity to congratulate them for what they’ve achieved,’ he added, heaping praise on Walid Regragui’s side.

‘And now you watch them; how they shake hands with the French. The dignity and the graciousness they show in defeat – brilliant.’

After the Atlas Lions ended Portugal’s World Cup run, the axed Manchester United star made straight for the tunnel in tears, visibly distraught at his side’s early exit from the tournament. 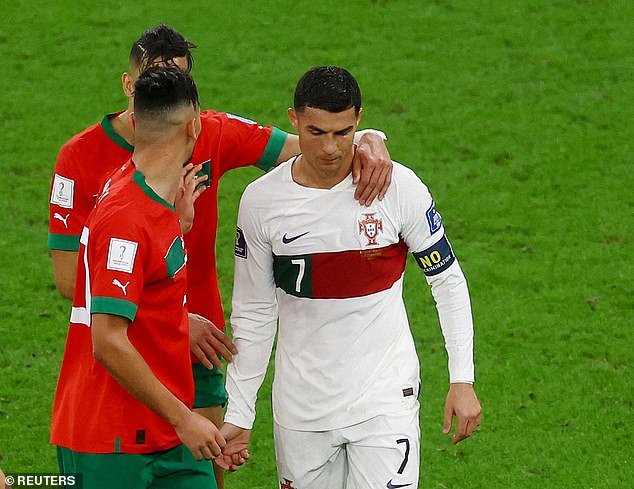 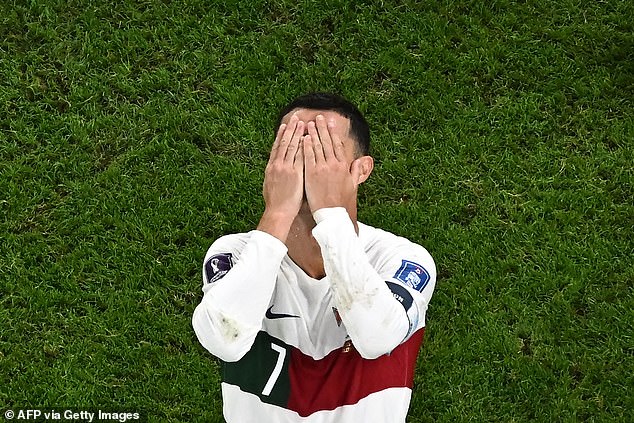 This is likely to be the 37-year-old’s final World Cup, with the next tournament in 2026

While this is likely to be 37-year-old’s final World Cup, the five-time Ballon d’Or winner is set to continue playing for his country, with Ronaldo keen to lead his side at Euro 2024.

‘Winning a World Cup for Portugal was the biggest and most ambitious dream of my career,’ Ronaldo posted online, after Portugal’s World Cup exit.

‘Fortunately, I won many titles of international dimension, including for Portugal, but putting the name of our country on the highest level in the world was my biggest dream.

‘I fought for it. I fought hard for this dream. In the 5 appearances that I scored in World Cups over 16 years, always alongside great players and supported by millions of Portuguese people, I gave my all.

‘I left everything on the field. I never turned my face to the fight and I never gave up on that dream.

‘Unfortunately, yesterday the dream ended. It is not worth reacting to heat.’

Morocco, meanwhile, also sadly failed to claim a berth in the finals of the tournament, after pushing Les Blues to the limit in an electric performance at the Al Bayt Stadium.

And despite going 2-0 down, thanks to goals from Theo Hernandez and Randal Kolo Muani, Morocco have captured the hearts of many fans during this tournament as an underdog, who showed spirit and dynamism to progress to the final four.