Shia LaBeouf’s latest movie, The Tax Collector, is being savaged by critics who have called it ‘incompetent,’ ‘a bloody mess’ and ‘one of the most atrocious viewing experiences of the year.’

The crime thriller, which also stars Bobby Soto and premiered on August 7, was written and directed by David Ayer, who was also behind films Suicide Squad, Training Day and Fury. 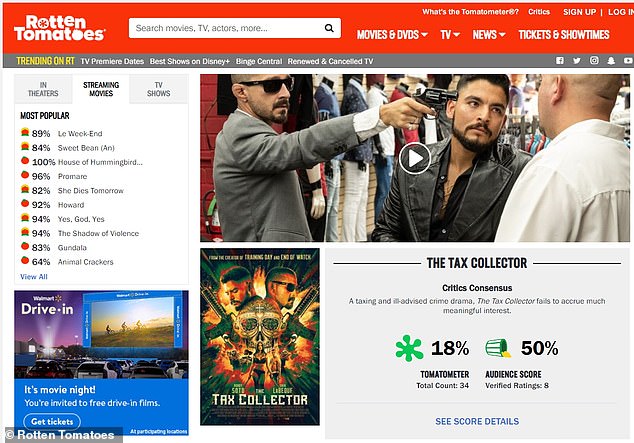 Earlier in the year, the movie made headlines when people accused LaBeouf of being in ‘brownface’ for portraying a Latino character despite being white, a claim that Ayer refuted when he tweeted on July 1: ‘Shia is playing a whiteboy who grew up in the hood. This is a Jewish dude playing a white character. Also the only white dude in the movie.’

Now, that the movie is out, however, it’s drawing negative attention for a whole different reason – including it’s stereotyped portrayal of Latinos, over-the-top violence, incoherence and bad dialogue.

As of Saturday, Rotten Tomatoes has given The Tax Collector a ‘rotten’ critics’ score of just 18 per cent, based on 34 reviews, while its audience reviews stand at just 50 per cent based on eight reviews.

‘A taxing and ill-advised crime drama, The Tax Collector fails to accrue much meaningful interest,’ is Rotten Tomatoes’ summary of the movie.

The Los Angeles Times started its review by noting that ‘Toxic macho energy permeates’ the movie and describes it as ‘a viciously exploitative bloodbath that regurgitates the negative image of Latino people still so pervasive in media.’ 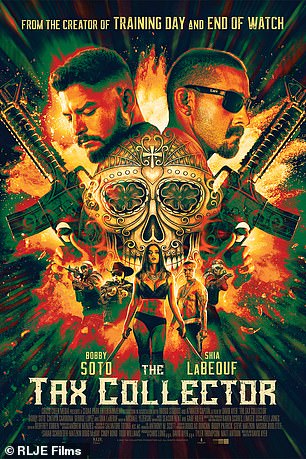 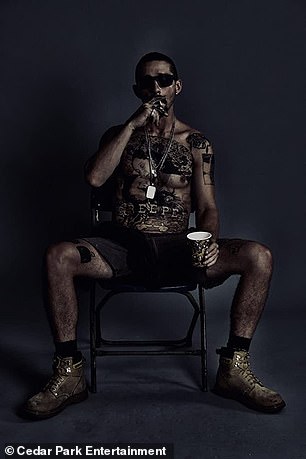 The Tax Collector centers around two men who work as enforcers for a Los Angeles crime lord. Shia LaBeouf (right) got a real tattoo of his characters’ name, Creeper, on his chest for the role 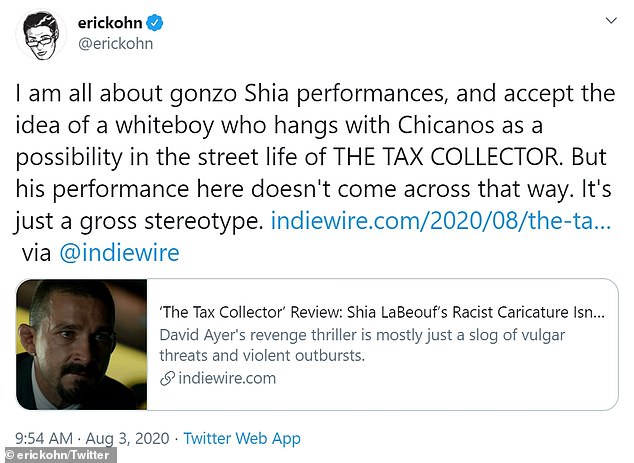 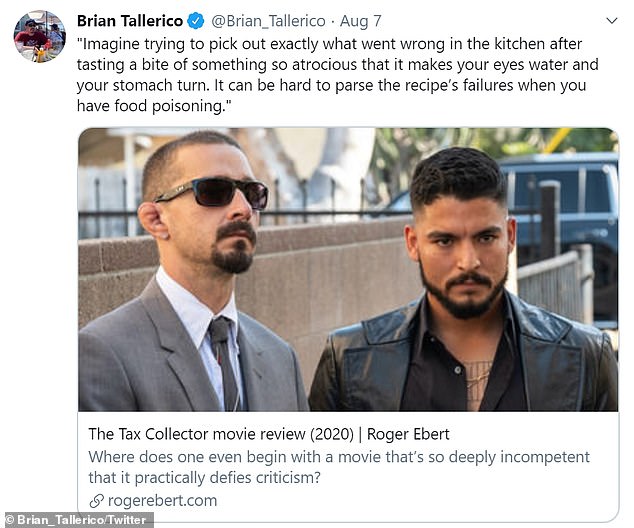 Critic Carlos Aguilar goes on to call it ‘One of the most atrocious viewing experiences of the year’ and says that the movie ‘relies on a trite visual language built on obvious flashbacks and bland imagery that match the unimaginatively dreadful writing where every Latino in sight is a gangster.’ 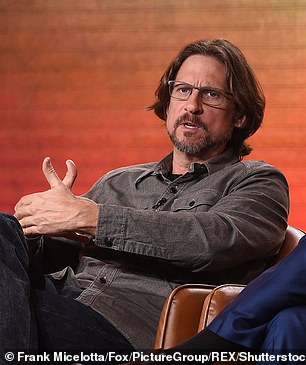 The Tax Collector was written and directed by David Ayer, who was also behind Suicide Squad and Fury

Critic Jeannette Catsoulis wrote the characters were ‘primally motivated and hilariously hackneyed,’ noting LaBeouf – and his costars – was ‘constrained ‘throughout by the weight of the stereotyping and dialogue that doesn’t stand a chance against the violence.’

The Hollywood Reporter called it a ‘well-acted film’ and said that it had ‘a lot of admirable aims, such as creating layered roles for the Latino acting community and spending production dollars in areas that could benefit from the economic boost.’

Despite the goals, ‘this grim bloodbath feels too routine to be of much interest,’ critic David Rooney wrote.

Although he praised LaBeouf’s performance in the film, he wrote that: ‘there’s too little depth to make you care about the characters and too little imagination at work to make The Tax Collector pay.’

IndieWire, however, blasted LaBeouf’s performance in the ‘bland’ movie, noting that the actor ‘stares and struts his way through a cartoonish and culturally insensitive performance as a troublemaking thug named Creeper that most certainly did not require him to get his character’s name tattooed across his chest.’ 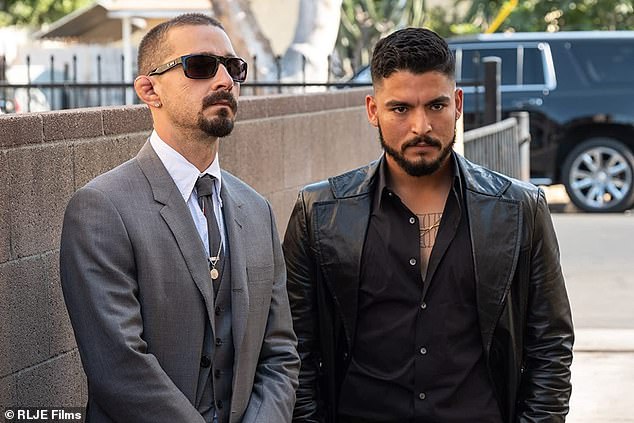 LaBeouf and Soto are show in a still from the movie, playing characters Creeper and David 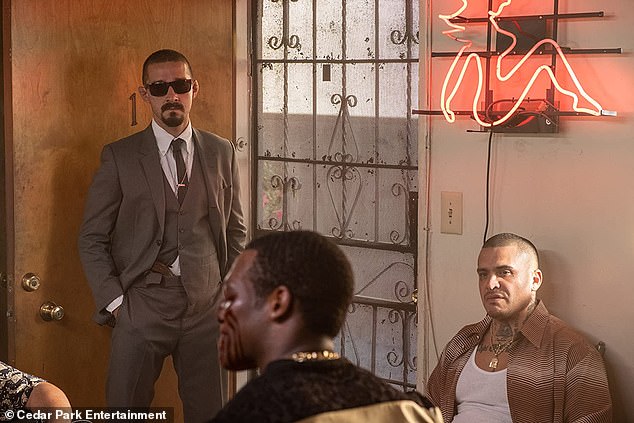 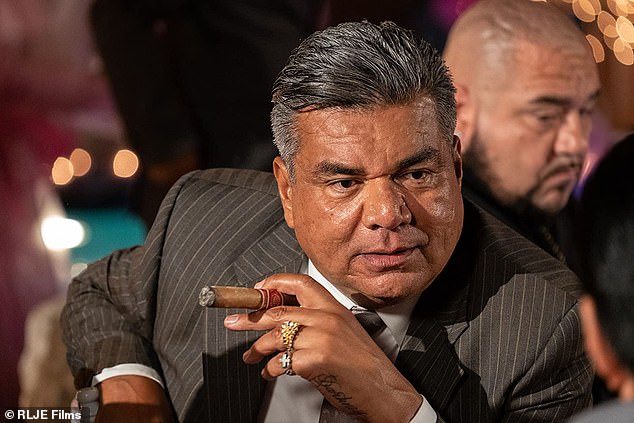 While filming the movie, LaBeouf tattooed ‘Creeper’ across his chest, beneath a portrait of his mother cradling a rodeo cowboy meant to symbolize his estranged father, according to reports.

Critic Eric Kohn, who gave the movie a D+, also called LaBeouf’s performance ‘two-bit Latino burlesque’ and said that the movie’s script ‘feels like it was written for video game cutscenes.’

The movie was also said to be ‘a slog of vulgar threats and violent outbursts.’

Variety’s review stated that the movie is ‘bloody, barely coherent and about as fun as having your face dragged across asphalt from a moving SUV.’

Critic Peter Debruge also called The Tax Collector a ‘bizarrely edited action movie,’ but pushed back against claims that the movie was racist, writing ‘while it’s true that there are virtually no non-criminals in the movie, it’s small-minded to suggest that Ayer is implying that everyone in South Central is some kind of gangster, or that the way any of these characters talk — including the Chicano-accented mumblings of lone white boy LaBeouf, appropriated from those around him — represents all Latinos.’

RogerEbert.com gave the movie a thumbs down, with critic Brian Tallerico calling he film ‘so deeply incompetent that it practically defies criticism.’

‘Once you get past the horrifically casual racist stereotypes, non-existent character depth, incoherent plotting, clichéd dialogue, and baffling editing, what’s perhaps most insulting is how numbingly boring the whole affair ended up,’ Tallerico wrote.

‘If you’re going to make a movie this lazily, at least try to make it fun!’

He goes on speculate that coronavirus might’ve been responsible for the way the movie turned out.

‘I don’t know if the blinding ineptitude in terms of basic elements like editing and plotting in the second half of this film could be attributed to COVID-19, but that’s the kindest thing I can presume,’ he wrote.

The Chicago Sun-Times reviewer, Richard Roeper, claimed the movie is an ‘underachieving, exceedingly violent urban gangster film with a meandering storyline and a contrived final twist.’

Although he did note that there are ‘intriguing setups in the well-paced early going.’

The Wrap’s Steve Pond wrote the movie ‘trots out a lot of posturing and a lot of gang-movie clichés but flails instead of giving us much reason to care’ and that its an ‘over-the-top exercise in melodramatic brutality.’