Critics spot a ‘big mistake’ in the giant online Bonds sock haul mum purchased for her family – so can you see the problem?

A mum has been described as ‘bold’ after buying dozens of pairs of different coloured $3 socks for her family of seven.

The woman posted on a budget hunting Facebook to show off the massive haul and said her husband was perplexed by the buy and asked if they were ‘a family of caterpillars’.

But it wasn’t the volume of socks that had the other members of the group in fits of anxiety – it was the many different colours.

‘Can I just say, owning more than one type of sock is a bold move,’ one man wrote.

‘My wife and I own like 10-12 pairs of the exact same sock (admittedly, I have massive feet, so it’s a good thing she likes big socks) so we never have to wear odd socks or go hunting for the appropriate other-sock,’ he clarified.

Are all your socks identical?

And it appeared he wasn’t the only one using the fool-proof method.

‘I buy the same style and brand for everyone in my family. Kids have the same, I have my own, so does the husband. That way I know who owns what,’ one mum said.

‘At the beginning of the school year I brought 50 pairs of the exact same socks and its made things much easier,’ another admitted.

‘I buy like 20 pairs of socks all the same colour and size so you can never lose a buddy to a sock and no more trying to match pairs,’ said a third woman.

Others complained their kids lose half of their socks.

‘I cant even find a pair of the last haul I bought. I must have at least 500+ odd socks,’ one mum complained.

‘I’m sure the kids take the other sock and just scatter them around the neighborhood,  once they come off there feet you’ll never find both socks again,’ she added.

Others said their socks simply disappear in thin air or their ‘washing machine eats them’.

‘We have a shoe box full of odd socks. I think they go to die with the Tupperware lids.’ 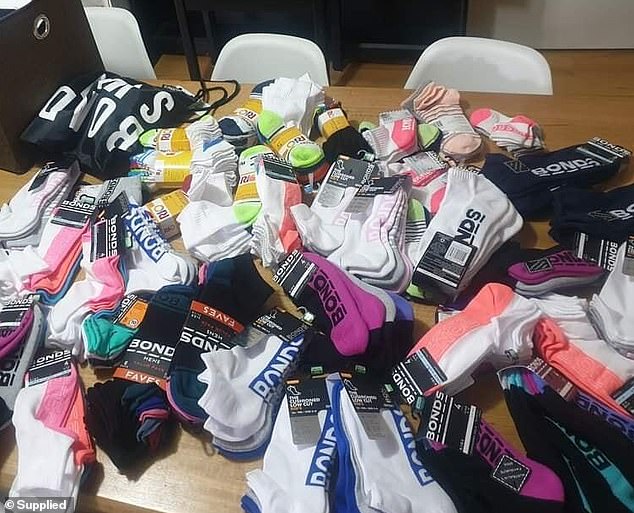 Others said having the same socks won’t stop them from randomly disappearing but they will do so without adding insult to injury.

‘You just don’t notice them ghosting you this way,’ the woman said.

The woman got her sock haul from the Bonds online sale last month.