‘Why does the shark look so sad’: Rugby league team is mercilessly mocked for its new ‘worst in Australian sport’ jersey

The Cronulla Sharks have been mocked online after revealing their 2020 NRL Nines jersey.

The club shared a picture of the official shirt to their Twitter page on Friday afternoon ahead of the challenge in February 2020.

An open-mouthed shark adorns the front of the jersey while a fin is printed on the back.

The jersey is on sale for $160 on the Cronulla Sharks website.

Social media users didn’t hold back on their thoughts about the jersey.

‘Did somebody lose a bet? Check that there isn’t a gas leak or lead in the water or something. Only explanations I can think of,’ a football fan tweeted.

Oliver Caffrey, an AAP reporter, posted a scathing review of the jersey to Twitter.

‘The jersey they did for [Paul] Gallen’s testimonial seems classy and understated in comparison,’ Mr Caffrey tweeted. 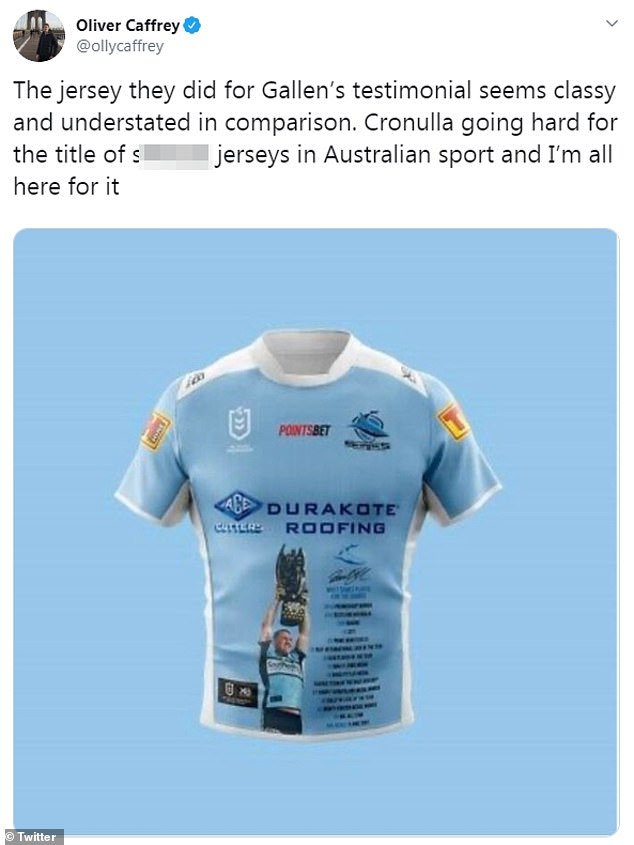 ‘Cronulla going hard for the title of the s******** jerseys in Australian sport and I’m all here for it.’

Another called the club ‘disgusting’ and another simply said the shark looked sad.

Not everyone agreed with the negative feedback on the jerseys.

Fans of the official merchandise pointed out that Nines jerseys are intended to be more outlandish.

Another said the club was probably loving the publicity they were getting.

The competition has been part of the NRL since 2014 – however it was paused in 2018 due to concerns over player workload.

Daily Mail Australia has contacted the Cronulla Sharks for comment.