Sharks legend Paul Gallen has left Ronaldo Mulitalo hanging after the Channel Nine commentator turned his back on the winger in a hilarious handshake blunder after their win over the Storm on Thursday night.

Gallen first spotted ‘Ronnie’ and was quick to reference the club’s huge win over one of their biggest rivals.

‘You know what it’s like beating the Storm at Shark Park, it’s important for the club,’ Mulitalo said.

‘Well done, mate, chat to you soon,’ Gallen replied before turning his back on the smiling 22-year-old who had his hand stuck out for a handshake. 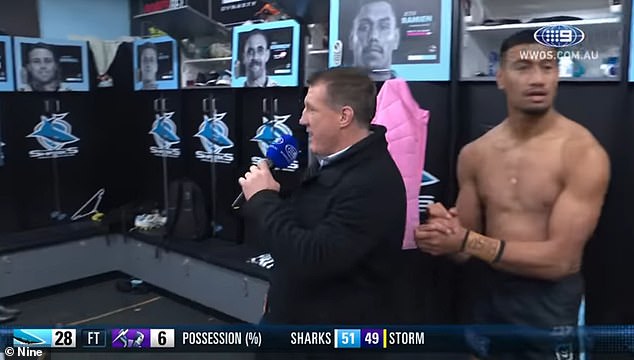 Mulitalo looked shocked at the snub before quickly shaking his own hand in a hilarious split-second reaction.

The 40-year-old heavyweight boxer moved on to Sharks lock Dale Finucane, completely oblivious to what he’d done to the winger.

NRL on Nine posted the cringeworthy one-sided handshake to Instagram with the caption: ‘All of us watching the gold medal dog act from Gal’, as the video was dubbed with a famous sobbing scene from Matthew McConaughey in Interstellar.

Gallen reposted the video to his personal account with the caption: ‘I would never leave my 36th favourite player at Cronulla hanging. Sorry my man @ronaldo_mulitalo #only35inthesquad’.

The awkward on-air act adds to a growing list of channel nine personalities leaving players cold at the end of pre and post game interviews.

Legends Andrew Johns and Johnathan Thurston both embarrassed themselves by walking away at the end of interviews without acknowledging the hands of Cowboy Jason Taumalolo and Penrith winger Taylan May. 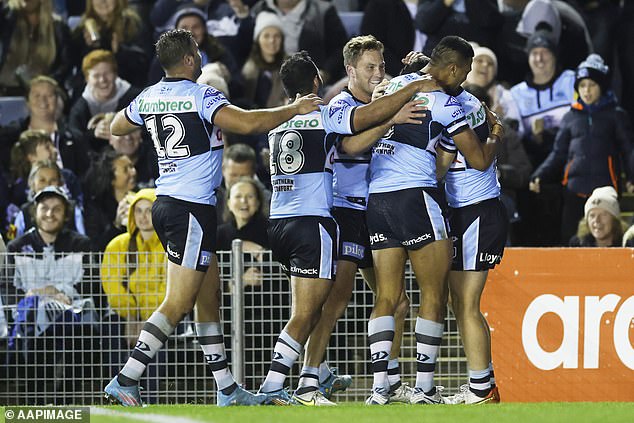 Mulitalo scored in the 33rd minute off the back of a slick grubber from five-eighth Matt Moylan in what was a two-half domination that kept Melbourne to nil with three minutes to go until the final siren.

Melbourne’s night was made worse after hooker Brandon Smith was sent off for calling referee Adam Gee a ‘cheating bastard’, which could see the star face many weeks on the sideline.

Cronulla move into tied second on the ladder, six points behind frontrunners Penrith.