Fastest arrest ever? Hapless crook tries to buy a drink using a stolen credit card with a cop standing right behind him in the queue

This is the shocking moment a brazen crook tries to use a stolen credit card to buy an energy drink, but is arrested by the cop standing behind him.

The footage, captured in Starlite Convenience Store in Alberta, Canada, shows the man trying to buy the Red Bull with a stolen credit card.

The man can be seen waiting in line, drinking straight from the can, as another customer makes a purchase in front of him.

A police officer then walks in behind the man and also stands in the queue.

Once he is at the front of the queue, shop worker Clayton Stevens scans the can’s bar code and the man pulls out his card.

He swipes the card in the machine and, when that doesn’t work, he tries to make a contactless payment by tapping it.

The man then puts the card in his pocket and pulls out some coins.

Unfortunately for him, the card appeared on the screen as stolen and Mr Stevens was told to contact the police.

The officer then swiftly pulls out his handcuffs and puts them on the man’s wrists. 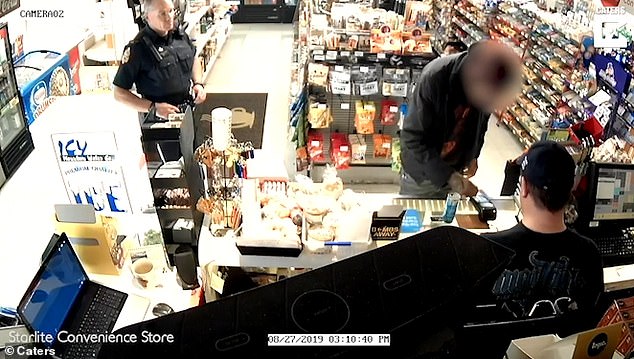 The CCTV footage, captured in Starlite Convenience Store in Alberta, Canada, shows the man trying to buy the Red Bull 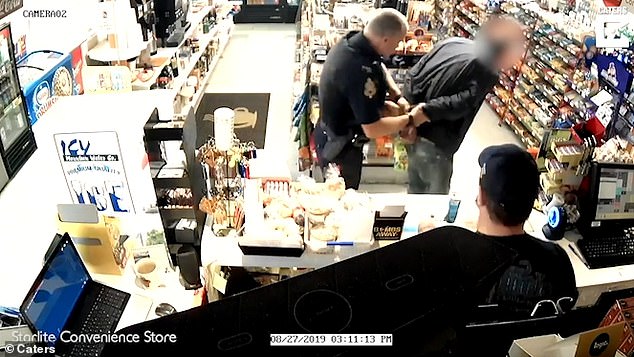 An alert appeared on the screen telling the shop worker that it was stolen. The officer pulls out his handcuffs and puts them on the man’s wrists

Mr Stevens said: ‘When he went to pay, unfortunately, it came up on the slip that it was a stolen credit card and to call the police, which was pretty easy to do.

‘I just had to show him the paper and he was more than happy to make an arrest.

‘I almost fell down laughing, I was doing pretty well everything I could to not start laughing as he was arresting him.

‘It was quite comical.’

Police were called to the area for a report of a suspicious person and the responding officer followed the suspect into the store.

The suspect has since been released on the terms that he will appear in court at a later date, which has yet to be scheduled.