Crowds of people ignored lockdown orders as they flocked to beaches in New York and New Jersey on Friday – despite both state governors announcing that beaches won’t formally be reopened until Memorial Day weekend.

As temperatures heated up ahead of summer, Gov. Andrew Cuomo of New York revealed that state beaches were allowed to reopen on May 22.  The decision was made in coordination with New Jersey and Connecticut, which previously announced their beaches would reopen that day as well.

Cuomo said that he had to do the same for New York to avoid people from the state flocking to New Jersey or Connecticut’s shores and potentially sparking another outbreak.

But on Friday, crowds of people flooded Brooklyn’s Brighton Beach to enjoy the weather a week early in defiance with state orders. 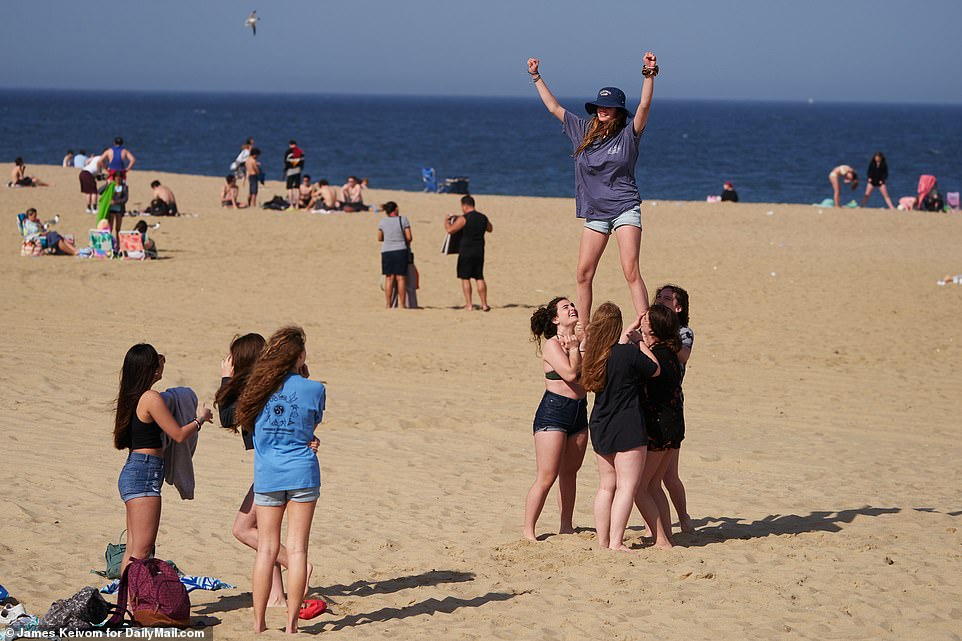 Pictured: a group of cheerleaders in New Jersey practice stunts on Belmar Beach on Friday ahead of its formal reopening on May 22 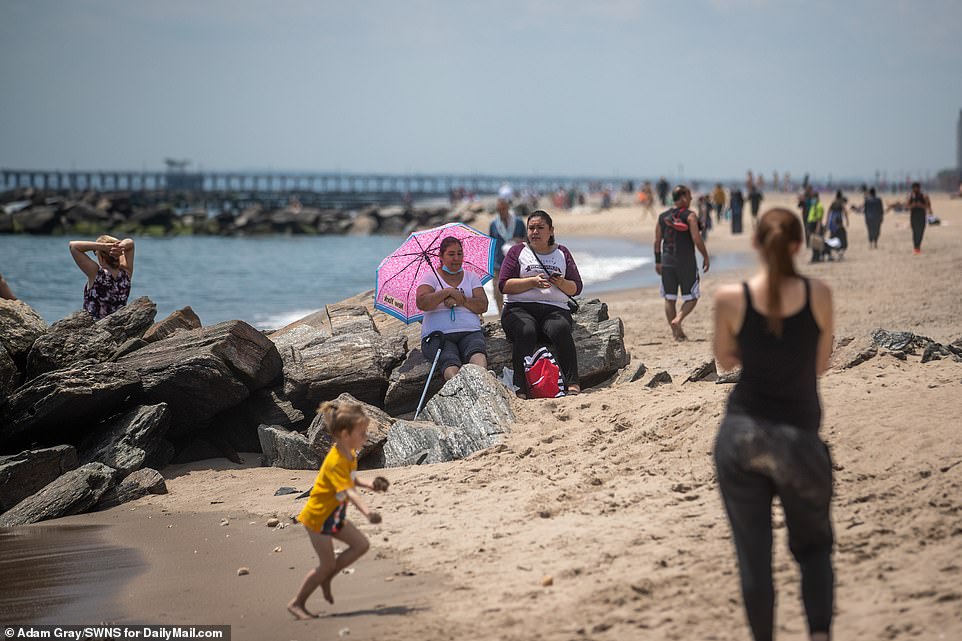 Gov. Cuomo said he reopened New York state beaches in partnership with New Jersey and Connecticut, which also announced they would open up their state beaches over Memorial Day weekend. Pictured is Brighton Beach in New York on Friday

Photos from Brighton Beach show hordes of people lounging on the sand and walking along the shoreline as temperatures soared to the 80s. Several people who visited the coast wore face masks  while on the beach.

Half the normal amount of people will be allowed on to the beaches and it will be enforced at parking lots. People must stay 6ft apart and if they are unable to, they must wear masks.

The announcement on Friday came as the daily death count in New York reached 132 – its lowest since March 26.

While the beaches will reopen, concession stands will not be open to avoid people lining up for food and drinks, Cuomo said.

But residents in New York City Mayor will have to wait as Mayor Bill de Blasio said that it’s ‘not in the cards’ for city beaches like Coney Island and the Rockaways to reopen amid the pandemic. 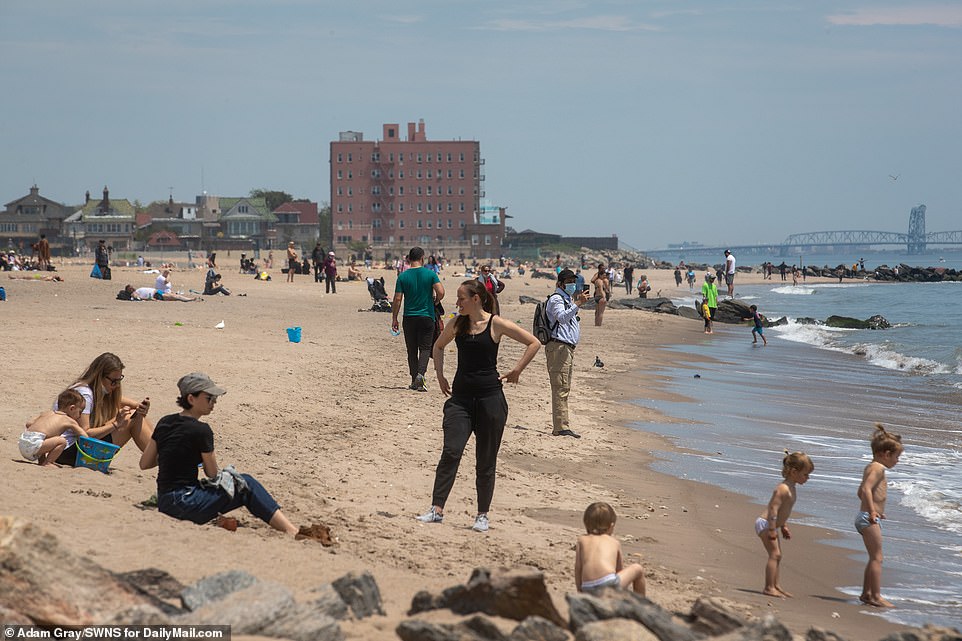 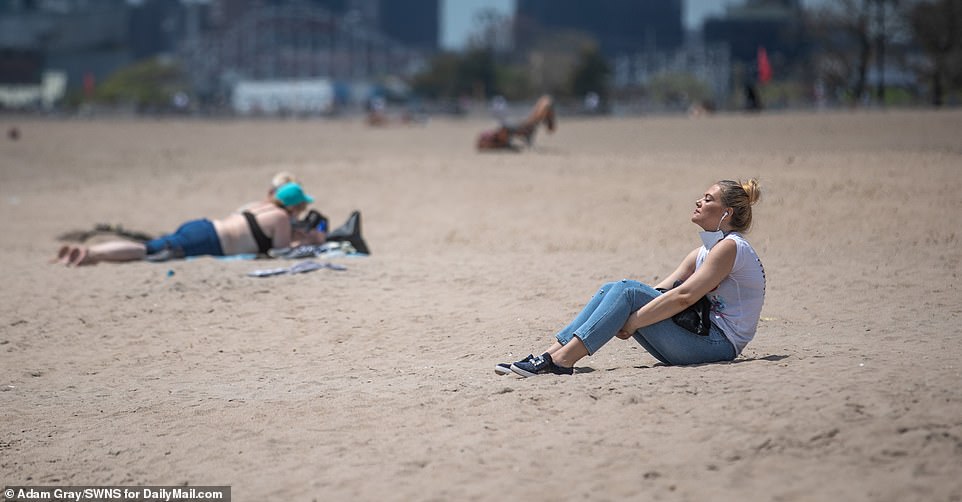 Pictured: a woman wears her face mask around her neck as she soaks up the sun at Brighton Beach, New York, on Friday 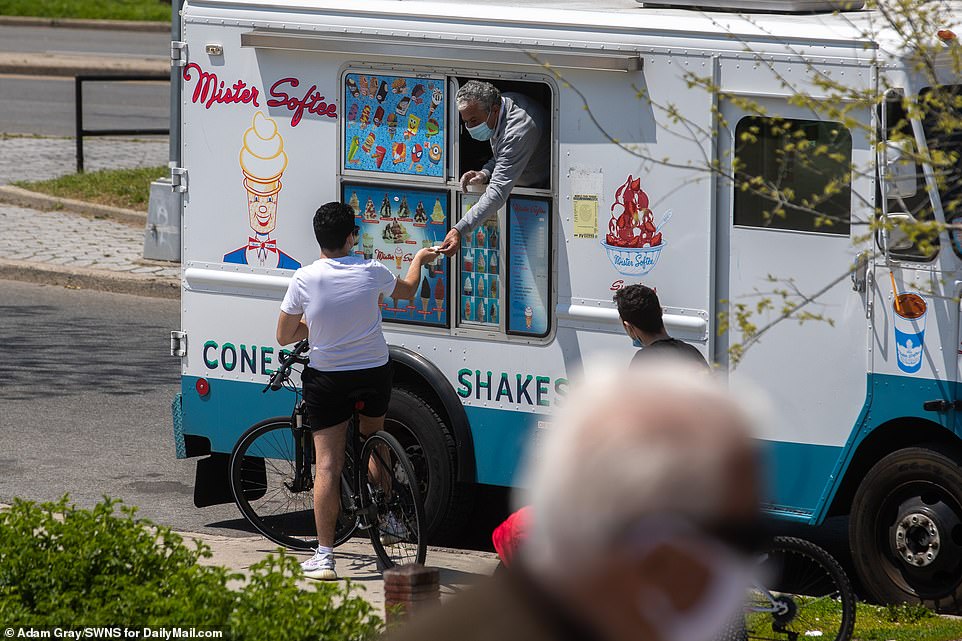 Pictured: a New Yorker donning a face masks purchases a treat from an ice cream truck on Friday at Brighton Beach

‘Doesn’t mean that’s a judgment on the whole summer yet, we’re going to take this day by day, week by week, but we know right now the lot of the things that we would look forward to doing, starting right away, we’re just not ready for,’ said de Blasio on Friday.

‘We love barbecues, picnics, ballgames, going to the beach, all sorts of things. Those things are going to be different for the foreseeable future.

‘It’s painful because we would all love to be able to go to the beach with the hot weather, but it’s not safe yet. That’s not in the cards right now. Again, we’ll see what the future brings, but not right now.’

This didn’t stop residents who rode bikes and walked with friends along the Coney Island Beach pier on Friday. 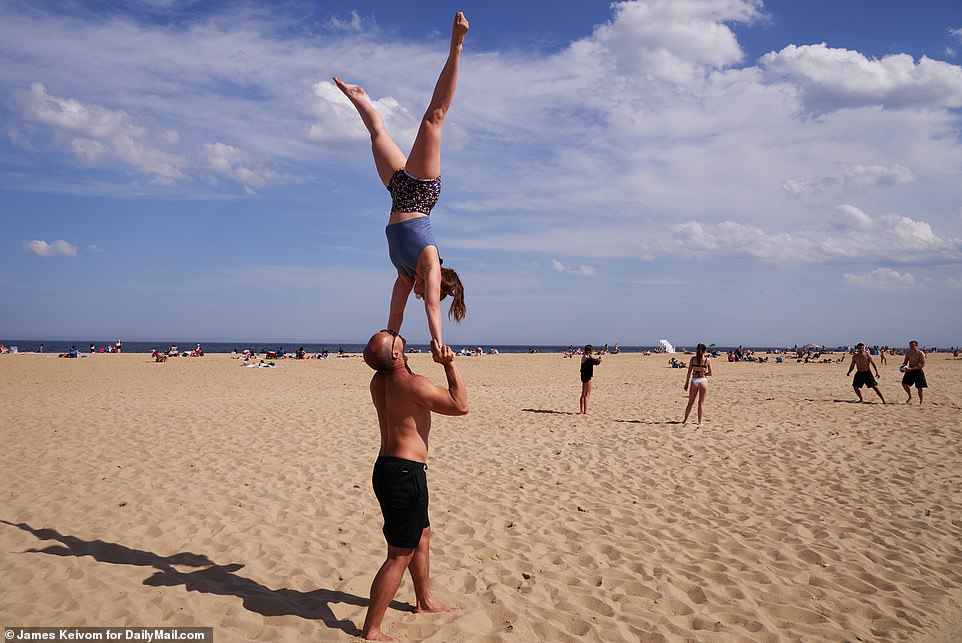 Gov. Phil Murphy previously said New Jersey state beaches could reopen on May 22, but doubled down that certain restrictions – like social distancing – would need to be implemented 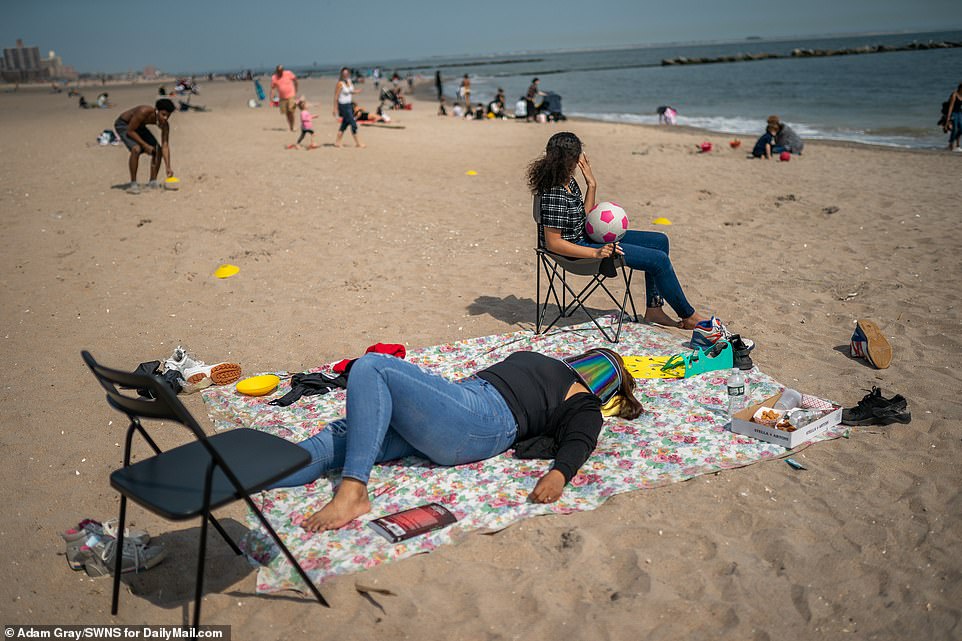 Additionally, officials from nearby Long Island upset with de Blasio, including US Senator Todd Kamisnky who hit back on Friday.

‘The city has good advance notice from 100 years ago that Memorial Day was approaching, it’s on the calendar,’ he said, according to WLNY.

‘For their own residents and for all New Yorkers in the downstate region, everyone’s beaches need to be operating by the same rules to not have too many people all go to one place,’ he added.

De Blasio said there will be increased park patrol from authorities to make sure New Yorkers don’t try to swim without a life guard present. 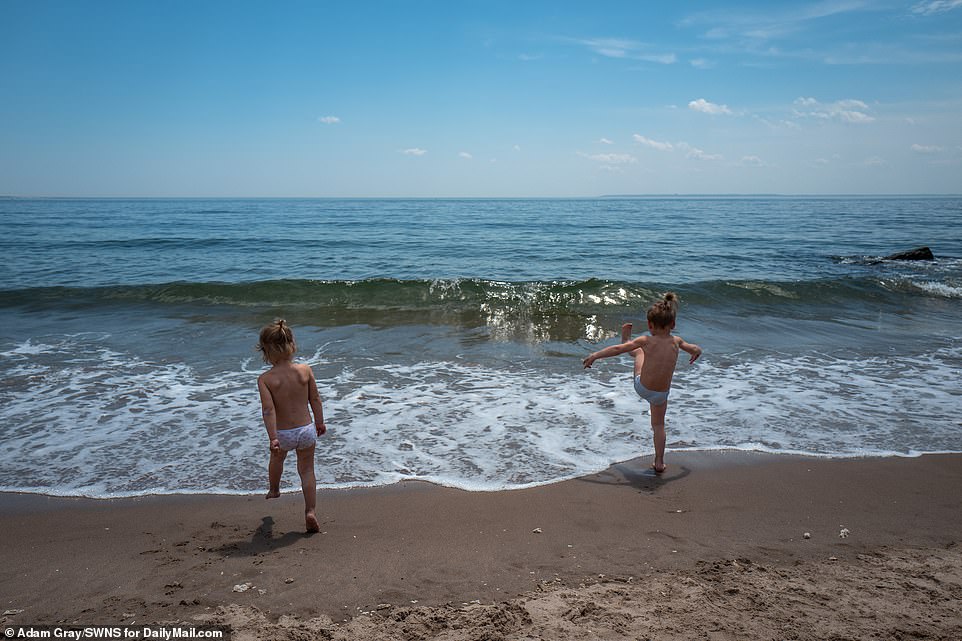 Although Gov. Cuomo gave the ‘OK’ for state beaches to reopen, New York City Mayor Bill de Blasio said that such a move is ‘not in the cards’ for city beaches 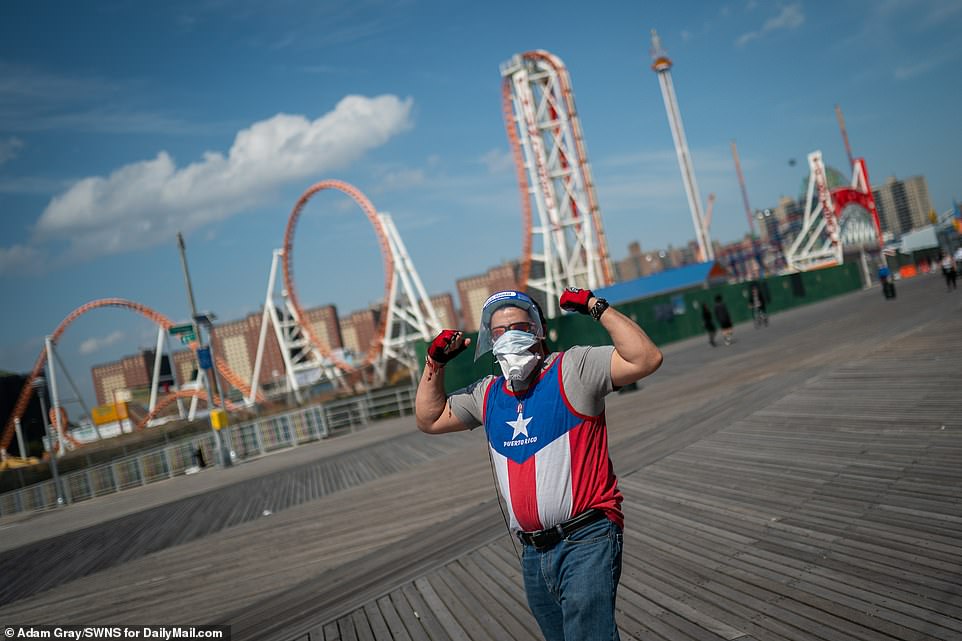 Mayor Bill de Blasio: ‘It’s painful because we would all love to be able to go to the beach with the hot weather, but it’s not safe yet. That’s not in the cards right now. Again, we’ll see what the future brings, but not right now’ 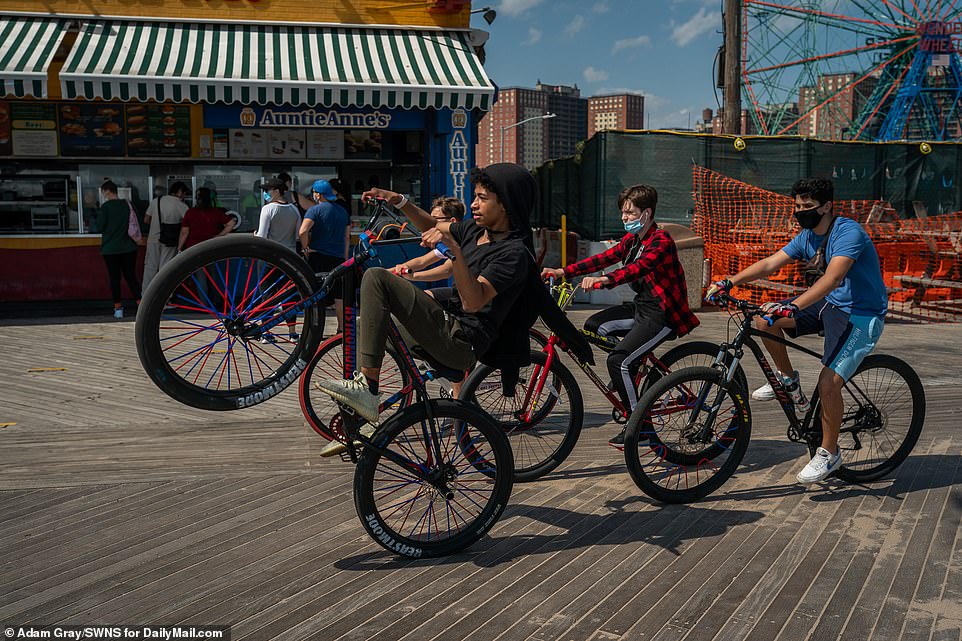 Pictured: a group of boys ride their bikes down the Brighton Beach pier on Friday as summer-like temperatures hit New York this week 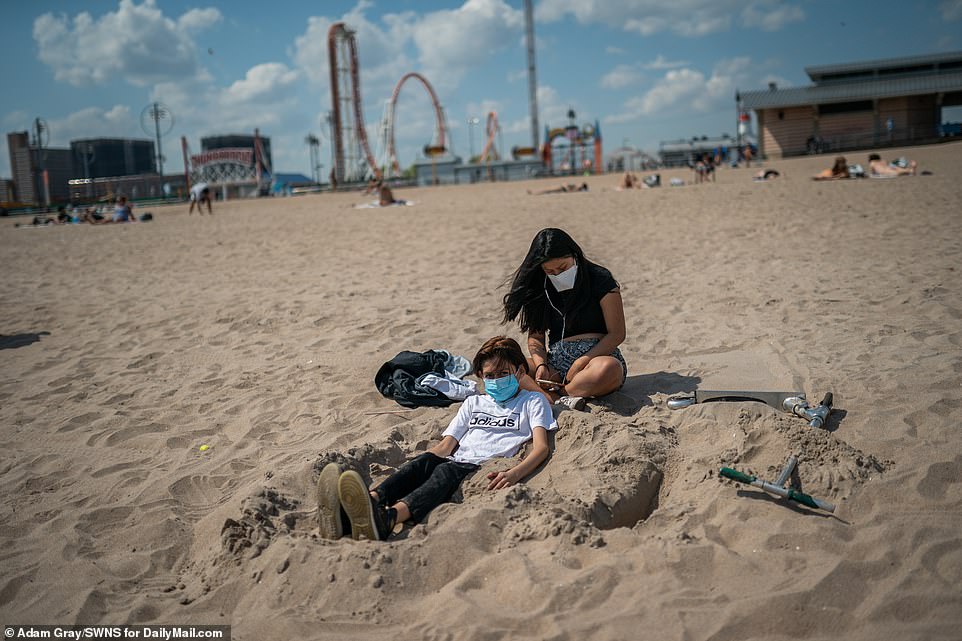 Pictured: a young boy wearing a face masks is buried beneath the sand by a friend at Brighton Beach in Brooklyn 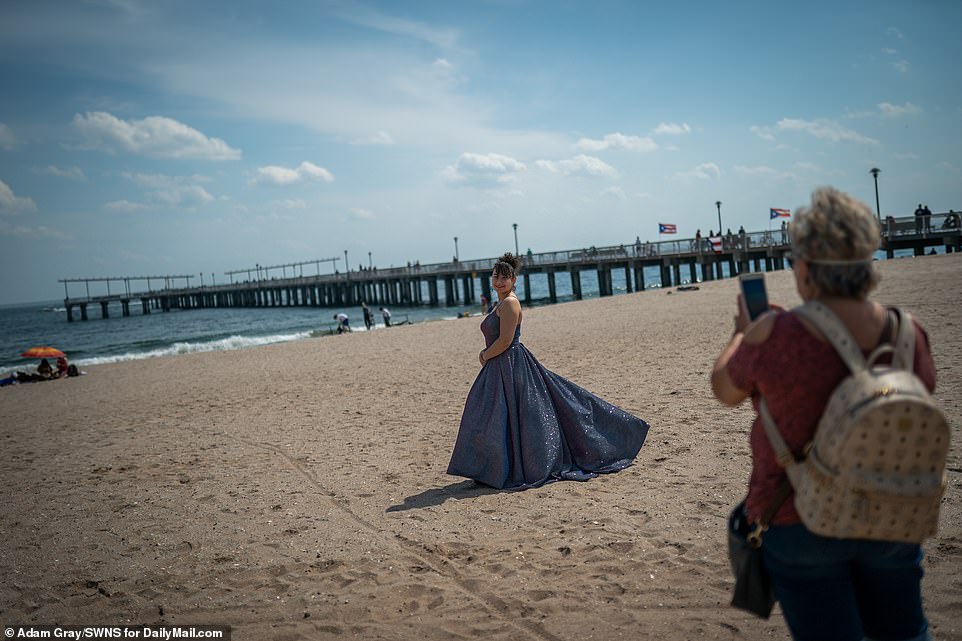 Cuomo on Friday warned that while restrictions may start to soften, people should not become complacent and think there is no longer a risk.

‘The amount of personal responsibility here to keep one’s self safe, I cannot stress highly enough. Do not play with this virus.

‘I can be asymptomatic and not know that I have it but I can put my hand down on this table, you can come touch this table three hours from now and pick up the virus.

‘I can walk into a store, put my hand on a stainless steel counter, you can come in the store the next day, put your hand on that counter and pick up the virus.

‘I don’t care how diligent the store owner is or how many masks you were.

‘Everyone is vulnerable to this virus. Government can’t keep you safe.

‘Only you can keep yourself safe. That’s the story of life and where we are today,’ he said. 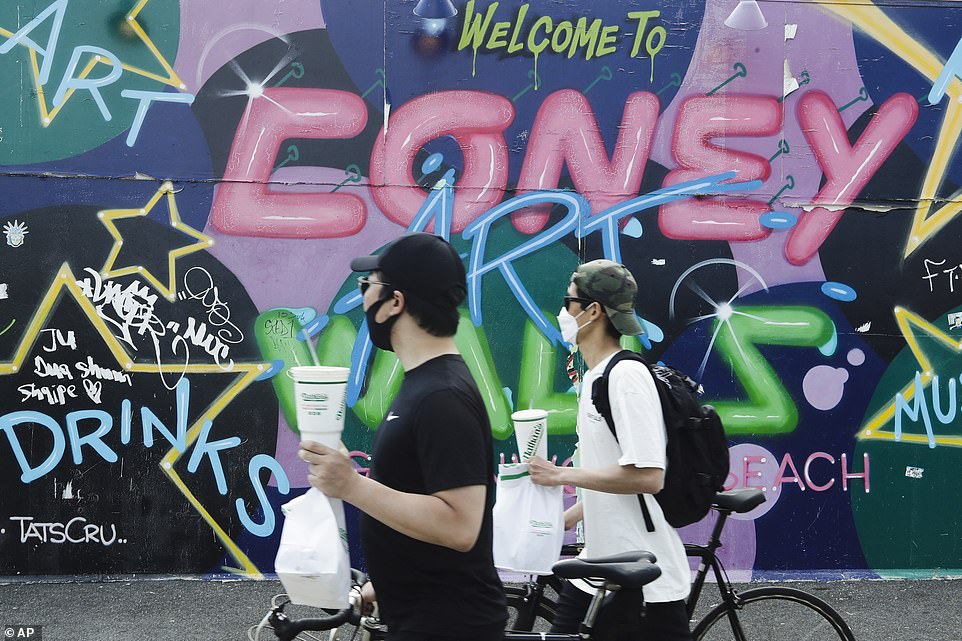 Pictured: Cyclists wearing protective masks walk with food from Nathan’s Famous past a graffiti art mural by Tats Cru toward the boardwalk of Coney Island Beach 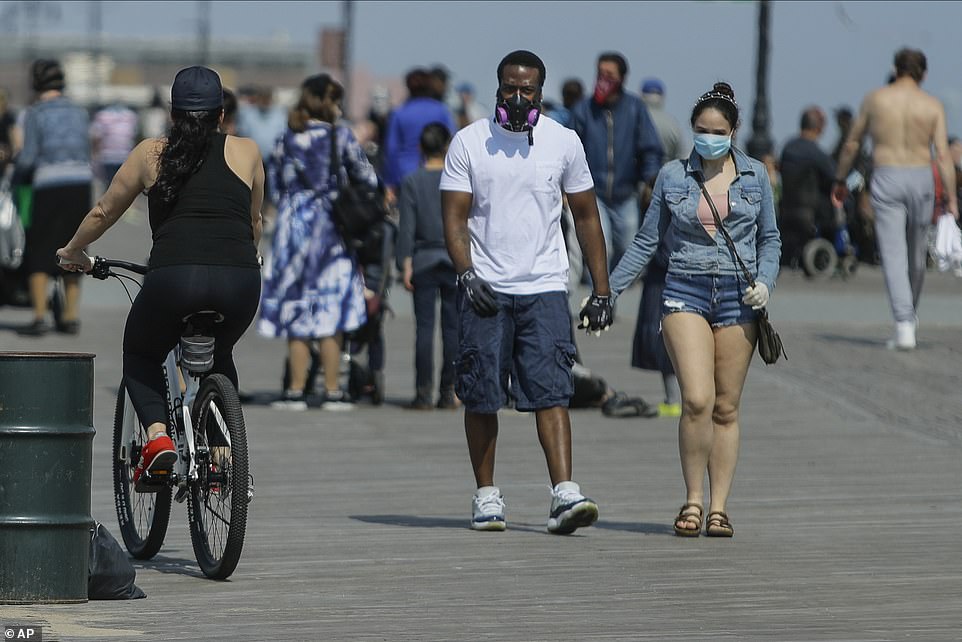 Dozens of people visited Coney Island on Friday, despite Mayor de Blasio saying that city beaches would remain closed for the time being 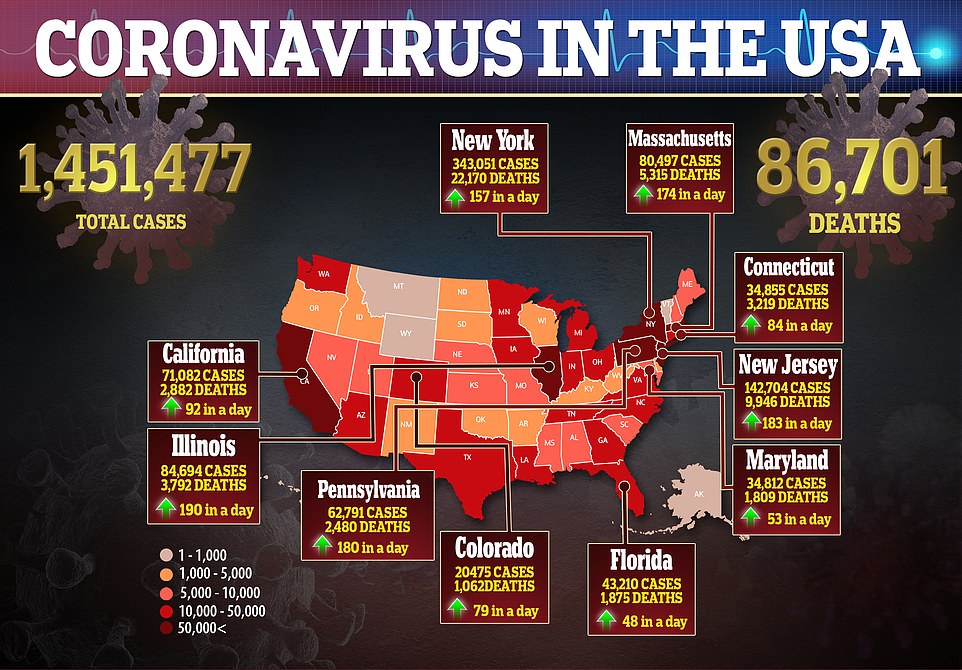 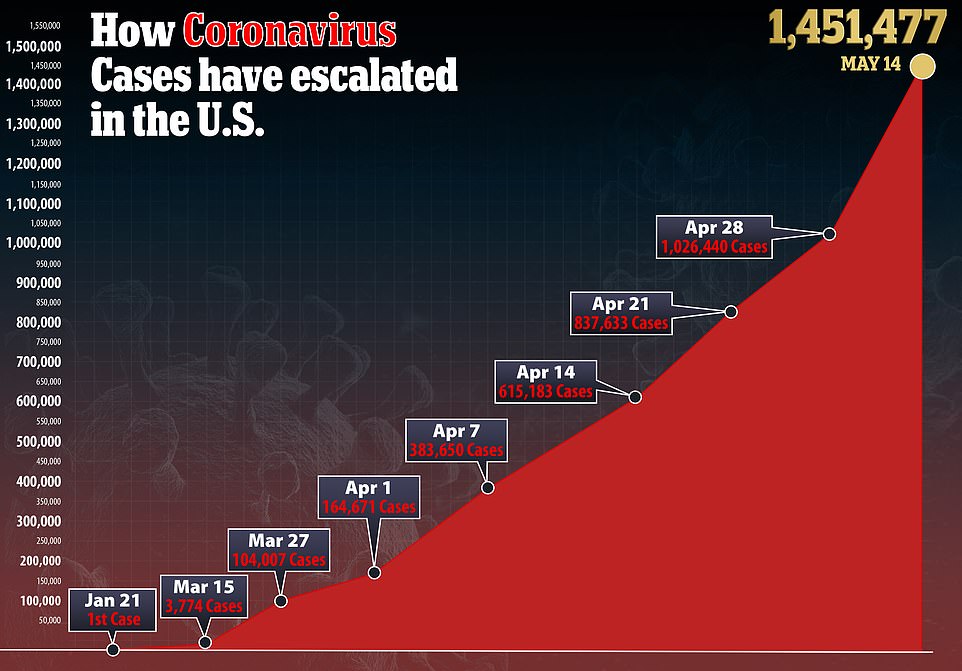 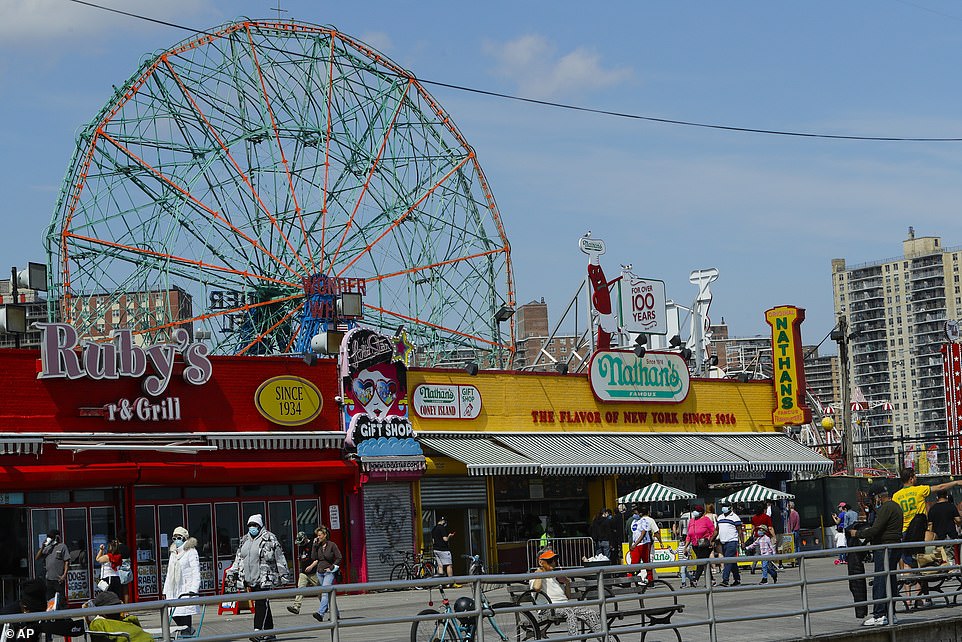 In New Jersey, residents also rushed to Belmar Beach and Seaside Heights one week early after Gov. Phil Murphy gave the go-ahead for beaches to open with restrictions.

Per new state guidelines, beach goers will have to adhere to admission limitations, practice social distancing, a ban on ‘special events’ and certain areas, like playgrounds and rides, remaining closed.

‘I’m leaving it to local officials on how to best implement these measures. Each shore town has its unique characteristics,’ said Murphy.

On Belmar’s boardwalk, benches have reportedly been removed to adhere to social distancing guidelines.

‘You need to have social distancing on the beach, but I have no idea how they’ll be able to do it some days,’ local Pauline Hebeler told CBS Philly.

‘I don’t want to just open it up totally and have everyone get sick again. Trying to find a happy medium is not going to be easy. I just want things to be normal again.’ 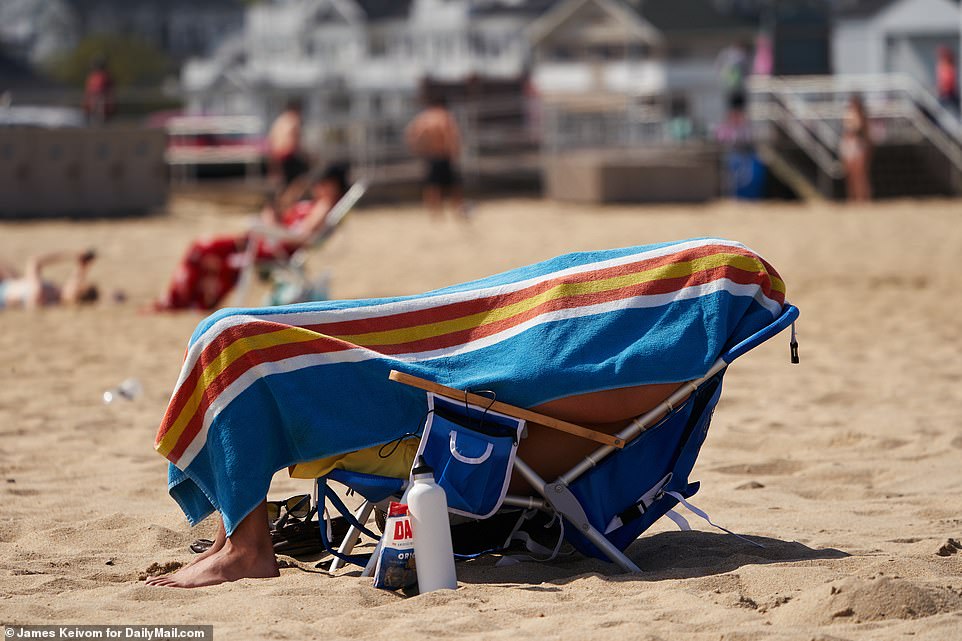 Pictured: a New Jersey resident sits beneath a beach towel while enjoying the warm weather at Belmar Beach on Friday 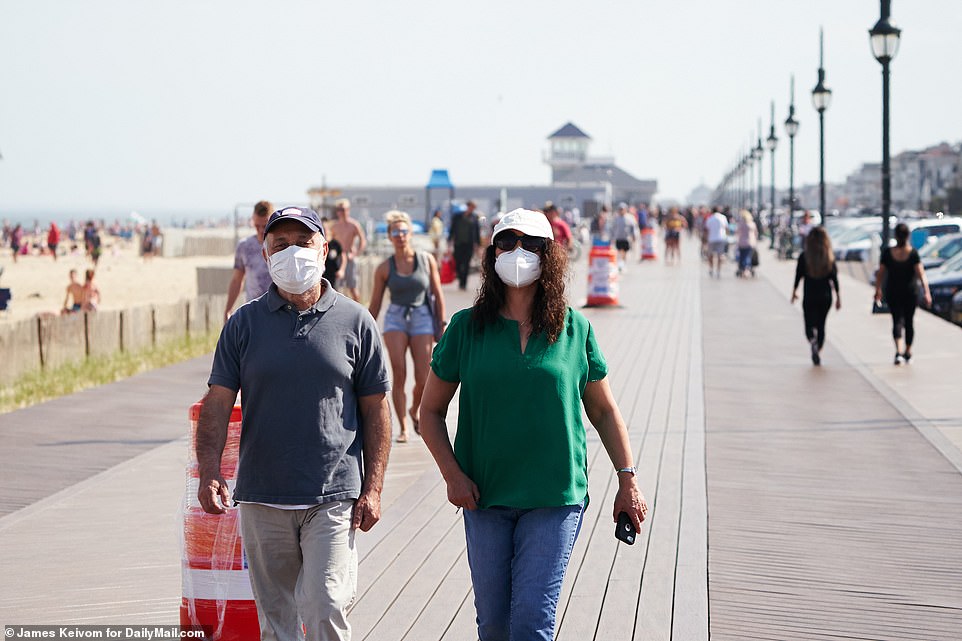 Officials in Belmar have been praised by Gov. Murphy for ‘putting forward a particular smart beach plan’ as beaches across the country tentatively reopen amid the coronavirus pandemic 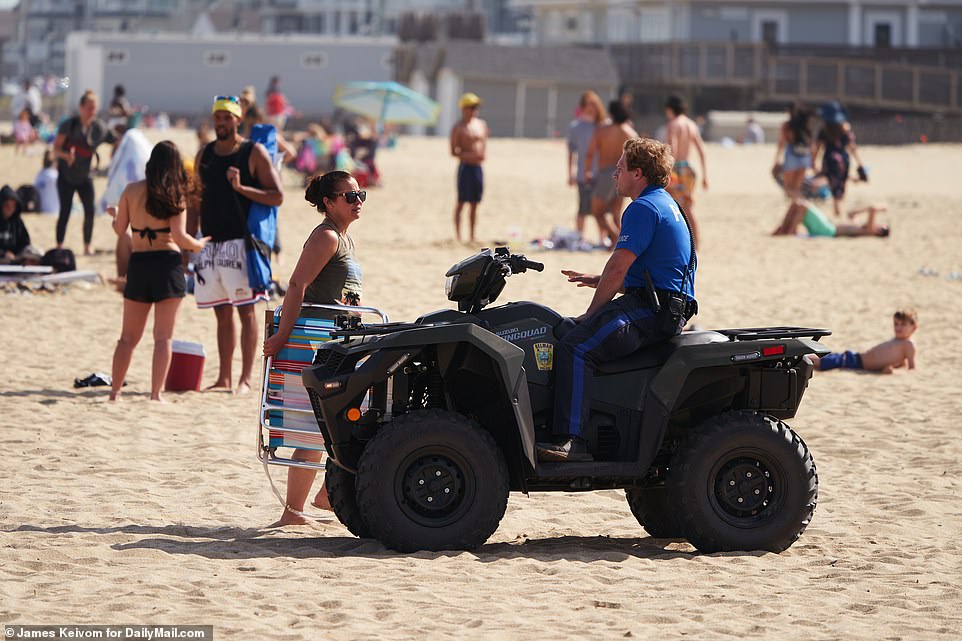 Although Murphy allowed beaches to reopen, he added that ‘each shore town has its unique characteristics’ and local officials will be in charge of determining how safely guide residents 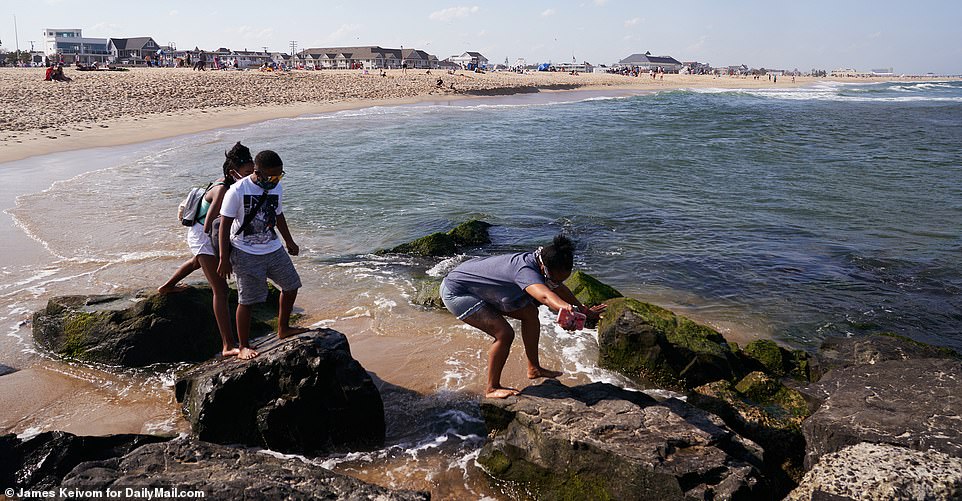 Pictured: a group of people hop along the rocks at Belmar Beach on Friday after state officials announced it would reopen on May 22 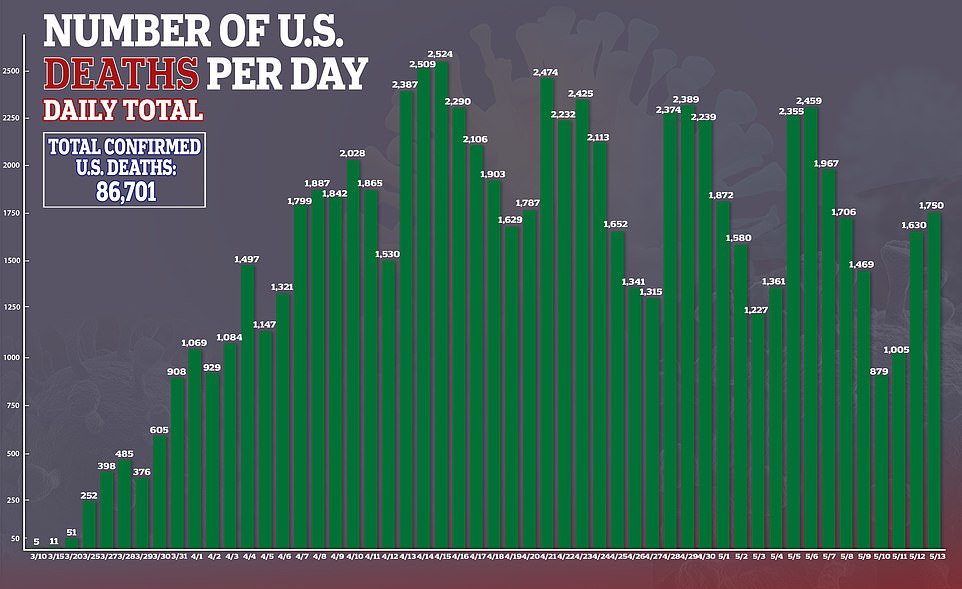 But locals admit it’s ‘hard to imagine’ what New Jersey beach towns and coastal cities will look like this summer as lockdown orders are gradually phased out.

Joanna Eichert told CBS Philly summers along the Jersey Shore are usually ‘very crowded and very relaxing,’ but the coronavirus pandemic might put a damper on the seasonal fun.

‘It would be nice to have it like it used to be,’ said Eichert, who visited Belmar Beach this week to let her two-year-old son play in the sand and on the boardwalk.

‘But you have to keep your distance now; I get that. We’ll see how it feels and how people are behaving. It’s hard to imagine what it’s going to look like this summer.’ 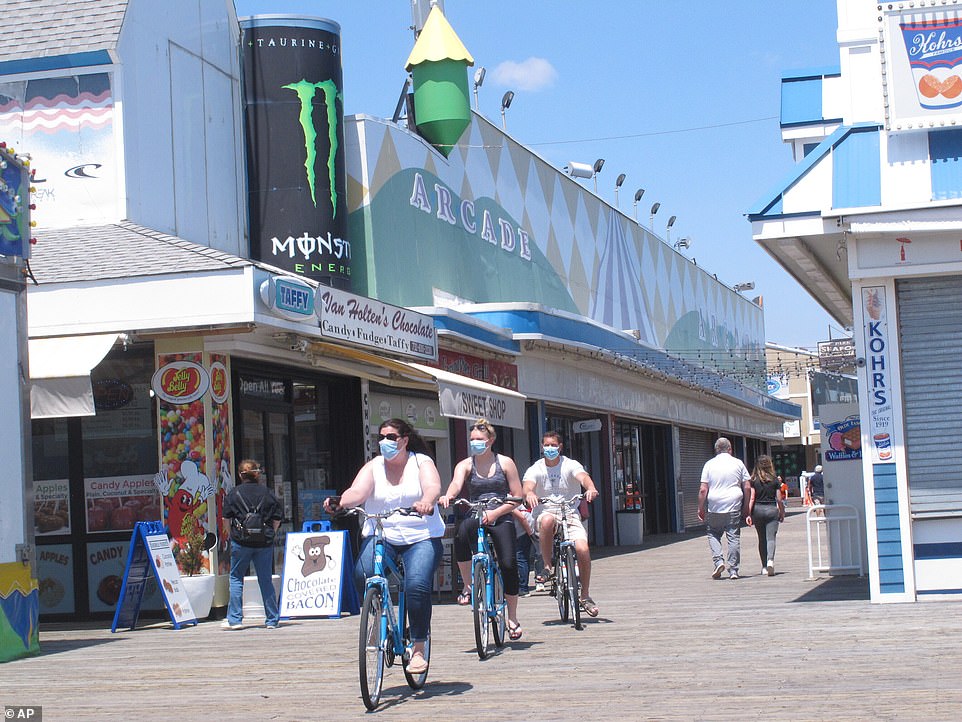 New Jersey’s Seaside Heights will open as well, but locals say they can’t imagine what the upcoming summer season will be like amid the coronavirus pandemic

Kate Schouldice, a New Jersey nurse with three children, said Friday was the first day her family had entered the public since lockdown orders.

‘This is actually our first day out. We just got a new puppy, I don’t know what I was thinking, and I’m a nurse at the hospital. So I don’t know what, like, it’s been insane,’ she told WLNY.

Some locals said they were thrilled by the prospect of beaches reopening so soon.

Others were wary after seeing so many people without face masks and ignoring public health guidelines.

‘If you just take a look around, from here, you see obviously a lot more people without masks than with. It’s a little frustrating,’ another man said.

People will only be allowed to walk, jog, surf or go surf fishing when beaches reopen. Swimming, lounging on the beach or milling around Seaside Heights beaches will not be permitted by local officials.

Seaside Heights Mayor Anthony Vaz said: ‘Make no mistake about it, our beach and boardwalk operations will be very different from past year.

‘We have the added problem at the local government level of a likely and substantial loss of revenue that has led to a reduction in manpower resources. This means less beach attendants, less lifeguards and less seasonal laborers.’ 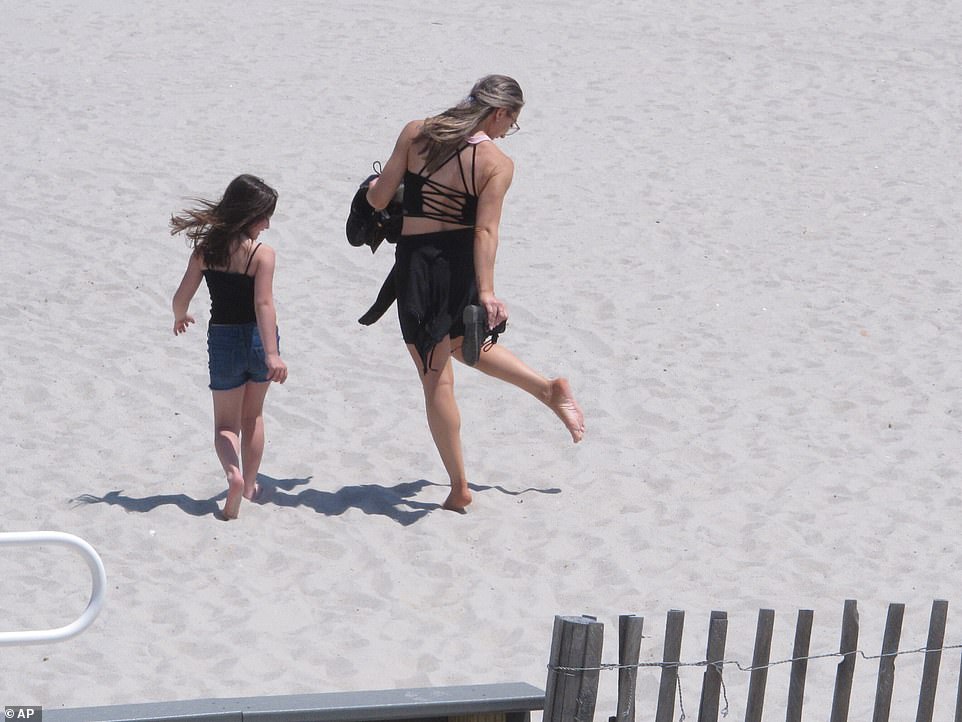 Seaside Heights resident: ”If you just take a look around, from here, you see obviously a lot more people without masks than with. It’s a little frustrating’ 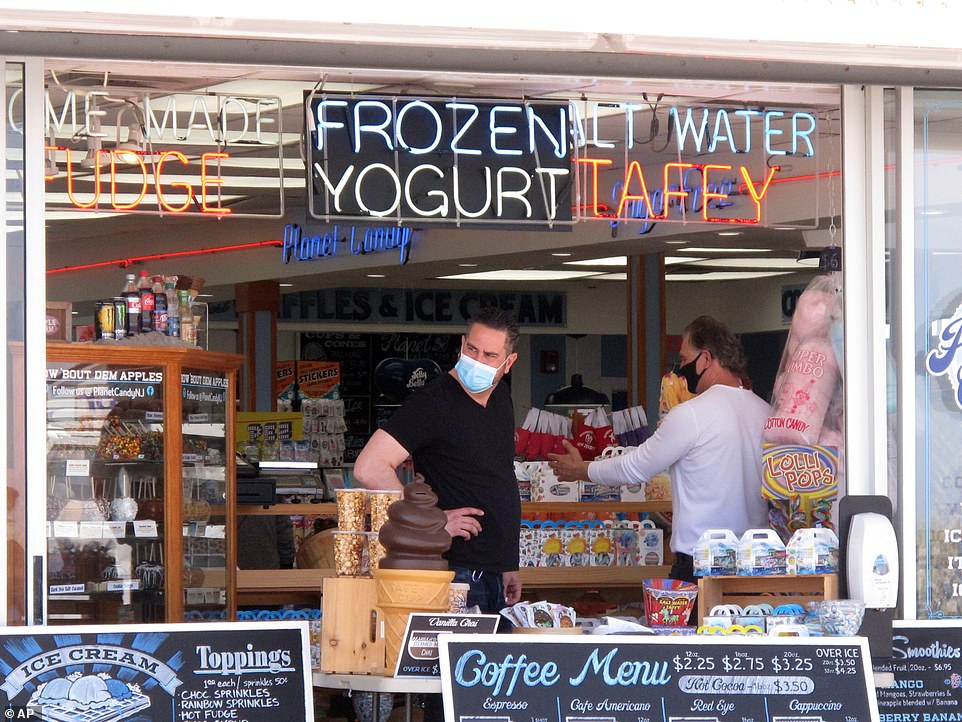 Seaside Heights Mayor Anthony Vaz: ‘We have the added problem at the local government level of a likely and substantial loss of revenue that has led to a reduction in manpower resources. This means less beach attendants, less lifeguards and less seasonal laborers’