Severe weather warnings have been issued across the Gold Coast in the midst of Oma, but that hasn’t stopped fearless surfers from hitting the waves.

A number of surfboarders were seen riding unusually high swells on Saturday despite the threat of gale force winds and dangerous surf conditions.

Crowds gathered at Kirra earlier today to watch the daredevil surfers after waves were reported to have been reaching 13 meters high.

Footage taken by beachgoers show dozens of people at shore watching in awe as large swells crashed against the jetties.

The surfers made sure to take safety precautions and were supervised by assistants riding on jet skis. 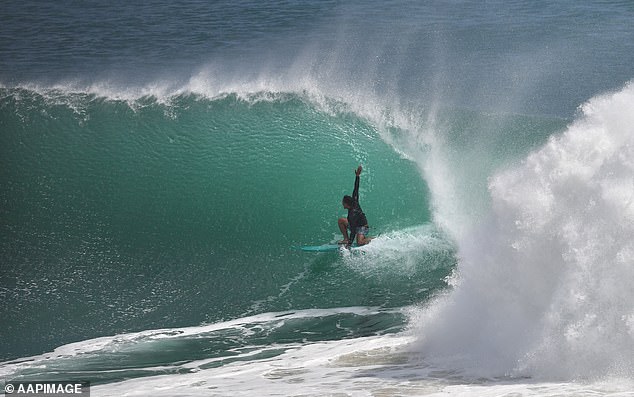 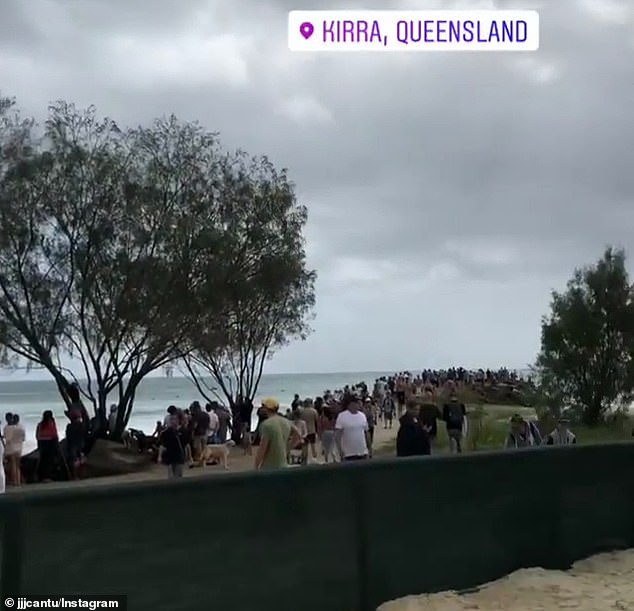 The conditions caused quite the spectacle, drawing large crowds to Kirra on Saturday morning

‘[Fanning] has his own jet ski with an operator on there assisting him if he gets into trouble, whereas someone just paddling off the beach with their own board by themselves is obviously exposing themselves to a lot of risk,’ he told ABC News.

The Bureau of Meteorology announced on Saturday that Oma had downgraded from a tropical cyclone to a subtropical system, but severe weather warnings still remain.

The system is currently 700km east of Brisbane and the area is expected to continue experiencing strong winds and high tides for the next two days.

‘Locally damaging wind gusts in excess of 90km per hour are likely about the exposed coast and islands between Sunshine Coast and the Qld/NSW border today,’ the BoM said.

The wind gusts could extend to the southern border ranges, inland to about Springbrook and Tamborine Mountain.

On Friday, video footage showed two men exchanging blows in the water after they fought over an enormous wave brought on from Oma. 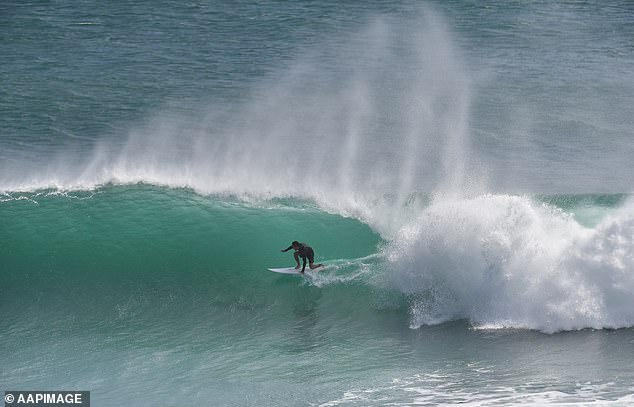 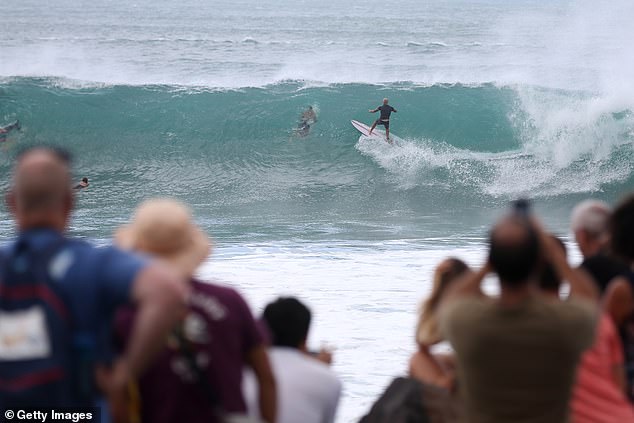 Surfers have been relishing the extreme weather brought in by Oma. Above they are pictured at Kirra on Friday 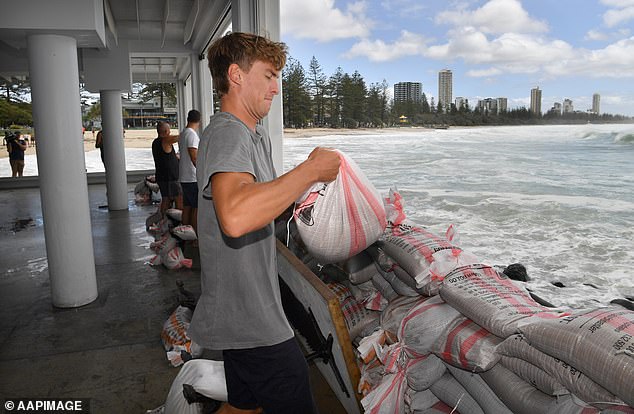 Rick Shores Restaurant staff members Dylan Verlinde is seen sandbagging the front of the restaurant in an attempt to protect it from the oncoming waves at Burleigh Heads on the Gold Coast, Saturday

After their surfboards nearly crossed paths, the wave took the pair of surfers under the water.

As they came back to the surface, one of the men went to throw a punch at the other one, the 9 News footage shows.

Under a volley of punches, the man sinks back and even has to duck his head back under the water to avoid the blows.

The scuffle in the water comes even though residents along parts of the Queensland and NSW coasts have been warned to stay away from beaches as gale force winds whip up metre high waves.

Weather in Brisbane remains cloudy with gusty winds. Temperatures could reach 29 on Saturday and a max of 28 on Sunday.

Meanwhile, Sydney has been experiencing bouts of rain with wind gusts up to 35km/h.

Temperatures reached 24 degrees on Saturday with a 70 per cent chance of showers.

Weather in Melbourne appears to be slightly warmer, with sunny skies and a max of 25 degrees on Saturday.

Sunday is expected to bring in hotter temperatures in the city with a high of 31 but could dip to 15.

Out west, Perth is expected to have dry weather. Max temperatures on Saturday was 27 with sunny skies. Sunday will see a max of 24, low of 11, with clouds.

Temperatures in Darwin continue to hit exceed the 30s but storms are in the forecast.

Saturday saw a high of 34 with a chance of late storm. The rain could continue throughout Sunday and Monday.

Canberra is expected to see warm temperatures this weekend with a high of 24 on Sunday and 26 to start the week on Monday.