The Crown Prince of Saudi Arabia has scrambled the kingdom’s army in response to rumours that members of the royal family are planning to unseat him in a coup, Emirati media claims.

Military personnel and assets have reportedly been moved from eastern and western Saudi Arabia to Riyadh while Crown Prince Mohammad bin Salman attends the G20 summit in Argentina.

Any military reshuffling would likely be a pre-emptive move to deter any potential plotters from making a move while the Crown Prince, known as MBS, is abroad.

The claims made in Emirati media coincided with an interview with a dissident Saudi Prince who claimed a royal coup is in the offing, and that the opposition is mobilising against the Crown Prince.

Worried? Crown Prince Mohammed bin Salman has reportedly moved troops and assets from other parts of Saudi Arabia to Riyadh in response to rumours of a coup

Prince Khalid bin Farhan al-Saud, who lives in exile in Germany, said that an opposition group has formed in Saudi Arabia with one goal: to unseat Crown Prince Mohammad bin Salman.

In an exclusive interview with al-Khaleej Online, Prince Khalid said the Crown Prince’s style of government is ‘ignorant and delusional’.

He said that if the royal family and ‘other countries’ decide to move against King Salman and the Crown Prince ‘a wave of violence is likely to occur as the Saudi kingdom is reigned using ignorant and barbaric methods’.

‘I hope that there will be a soft coup that overthrows the deep state and takes controls of prominent security institutions, and then sacks the Crown Prince and the king.’

His words backs up reports that there is a growing conspiracy among members of the House of Saud to ensure the favoured son does not become King when the 82-year-old King Salman dies. 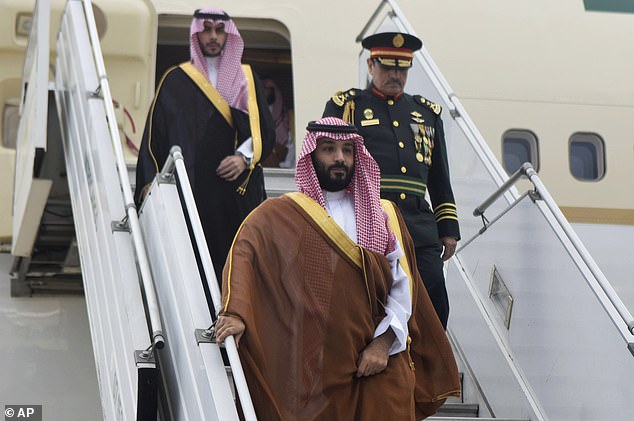 Saudi Arabia’s Crown Prince Mohammed bin Salman deplanes at the airport in Buenos Aires, Argentina ahead of the two-day G20 Summit on Friday and Saturday 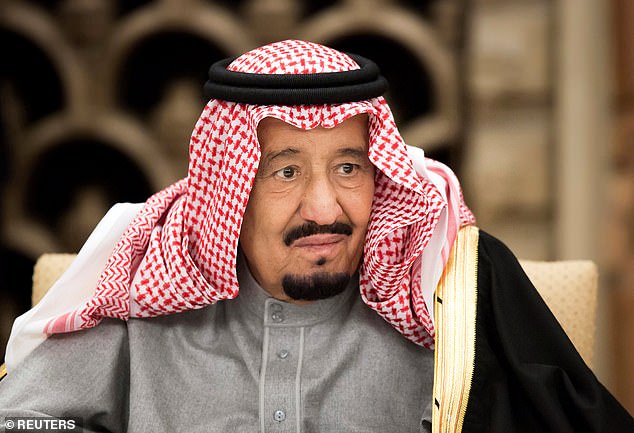 Coup rumours: Dissident Prince Khalid bin Farhan al-Saud, who lives in exile in Germany, said he hopes for a coup which unseats both the Crown Prince and King Salman, pictured, 82

Unlike European monarchies, the House of Saud is made up of hundreds of princes, with the power of succession drawn across tribal lines, rather than automatically going to the eldest son.

Each branch of the dynasty is consulted before a new King succeeds, but as the Crown Prince is now the de-facto ruler, an attempt to remove him from the equation would likely have violent consequences.

A preferred candidate of the opposition is Prince Ahmed bin Abdulaziz, 76, younger full brother of King Salman and uncle to Mohammad bin Salman.

Prince Ahmed was one of only three people on the Allegiance Council, made up of the ruling family’s senior members, who opposed MBS becoming crown prince in 2017, two Saudi sources said at the time.

Senior U.S. officials have indicated to Saudi courtiers in recent weeks that they would support Prince Ahmed, who was deputy interior minister for nearly 40 years, according to Saudi sources with direct knowledge of the consultations.

These Saudi sources said they were confident that Prince Ahmed would not change or reverse any of the social or economic reforms enacted by MbS, would honour existing military procurement contracts and restore the unity of the family.

As well as dealing with enemies at home, Crown Prince Mohammad likely faces the cold shoulder in Argentina as he struggles to shrug off the lingering stigma of a the murder of journalist Jamal Khashoggi. 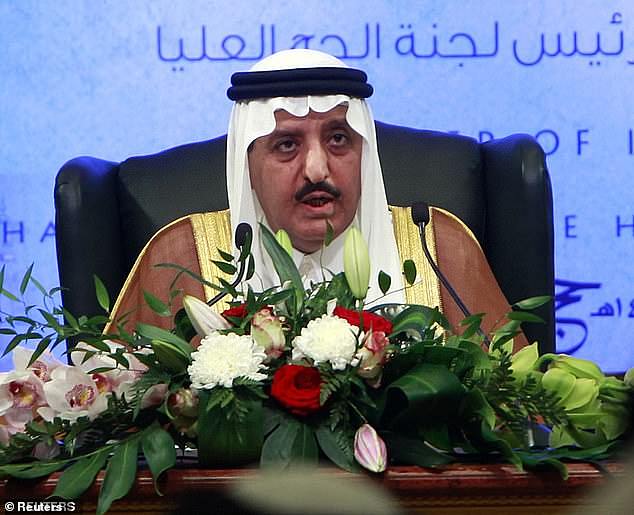 Prince Ahmed bin Abdulaziz, 76, younger full brother of King Salman and uncle to the crown prince is the preferred candidate for the throne, according to sources within the Saudi court

He has been on an Arab tour before he attends the Group of 20 summit in Argentina on Friday, where he faces world leaders who have strongly condemned Jamal Khashoggi´s killing last month in the kingdom’s Istanbul consulate.

The country’s de facto ruler has brushed aside the international pressure, attempting to use the overseas visits to shore up his tarnished reputation and reinforce relationships with allies, but some officials in the prince’s entourage are bracing for a frosty reception at the G-20 summit.

Ahead of the prince´s visit, Human Rights Watch urged Argentine prosecutors to consider bringing criminal charges against Prince Mohammed over alleged war crimes in a brutal Saudi-led war in Yemen and his possible complicity in Khashoggi´s murder.

It was unclear whether Argentine prosecutors would act on the request.

The prince’s supporters fear that world leaders could leverage his weakened international position to gain concessions from the kingdom, as it struggles with a slump in oil prices.

The hostility stands in stark contrast to the prince´s month-long tour of the United States earlier this year, where he received something of a rockstar reception and hobnobbed with business titans such as Disney chief Bob Iger and Apple’s Tim Cook.