Mary, 46, showed off a red and yellow wrap, along with a colourful headdress and necklace, as she visited the Kalama Conservancy in the south-west of the country.

Wearing her hair up in a high bun, she opted for a natural make-up look, later shielding her eyes with a pair of trendy sunglasses.

The mother-of-four looked in high spirits as she was given a warm welcome by a group of local women as she arrived at the nature reserve.

Crown Princess Mary of Denmark donned traditional African dress during a visit to Kenya on Tuesday, where she was joined by Danish Minister for Development Ulla Toernaes (right) 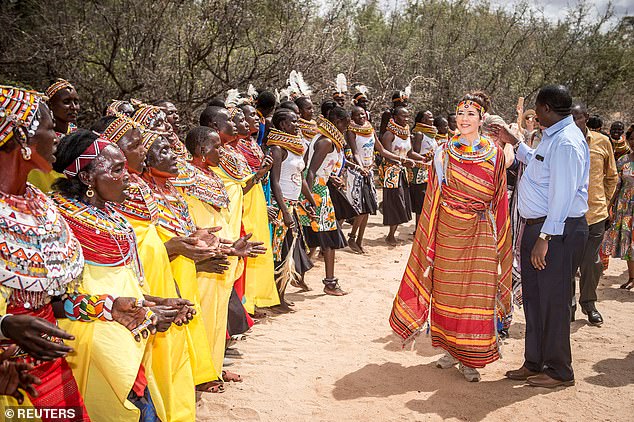 Mary, 46, wore and a red and yellow striped wrap as she visited the Kalama Conservancy, in the south-west of the country

Mary looked stylish as she arrived in Kalama wearing a simple blue shirt and beige chinos.

She finished off the look with a pair of practical New Balance trainers on her feet, and a tote bag slung over her shoulder.

The royal was joined by Danish Minister for Development Ulla Toernaes on the visit, but husband Crown Prince Frederik did not accompany her on the trip.

Mary has made several trips to Africa in the past, including a visit to Burkina Faso in 2016. 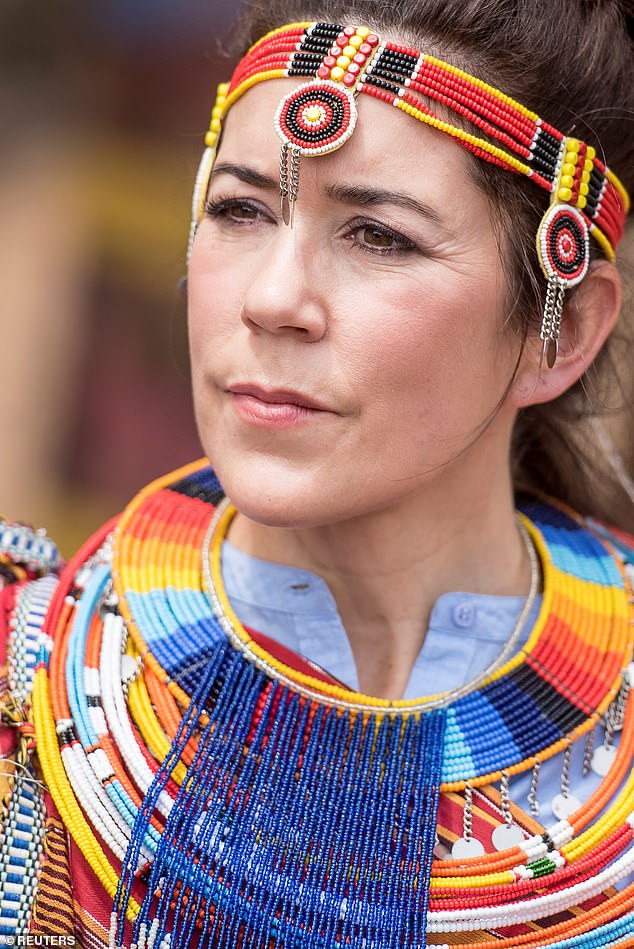 Wearing her hair up in a high bun, Mary showed off a colourful headdress and necklace during the visit on Tuesday 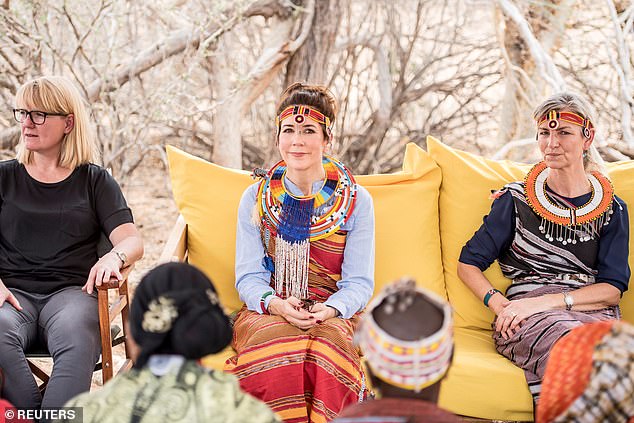 Mary was joined by Danish Minister for Development Ulla Toernaes (right), but husband Prince Frederik did not accompany her on the trip 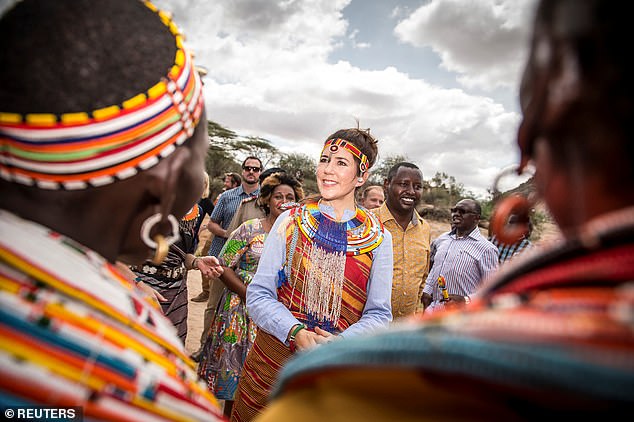 The trip was focused on promoting the importance of sexual and reproductive health of women and girls in the region.

Mary has had a busy month so far, joining husband Frederik, 50, in presenting the Crown Prince Couple’s Prizes 2018 on Friday.

The couple put on a loved-up display at the event, following suggestions of marriage troubles.

Rumours began swirling after an unnamed insider told New Idea magazine: ‘There are a lot of rumours of tension between Mary and Fred’.

‘There are whispers running wild of a divorce or possible split and it’s become very stressful for the whole palace – trying to work out what’s going on.

‘The truth is that like any married couple, Fred and Mary are having a tough time of it at the moment.’ 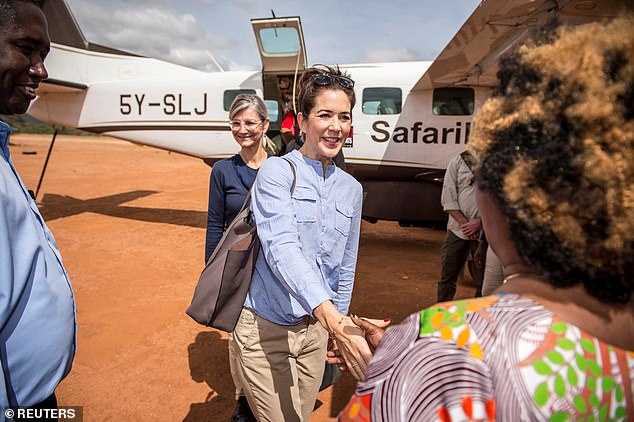 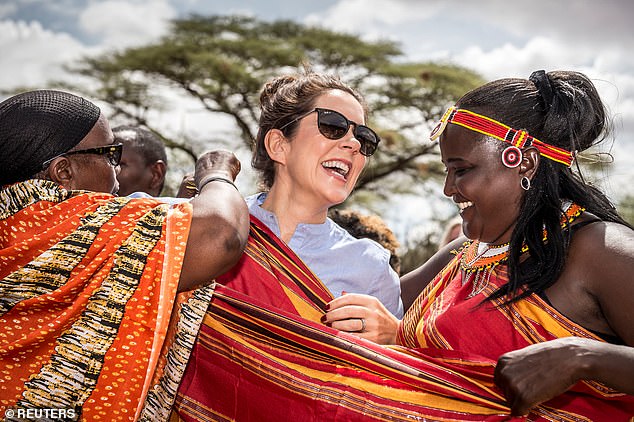 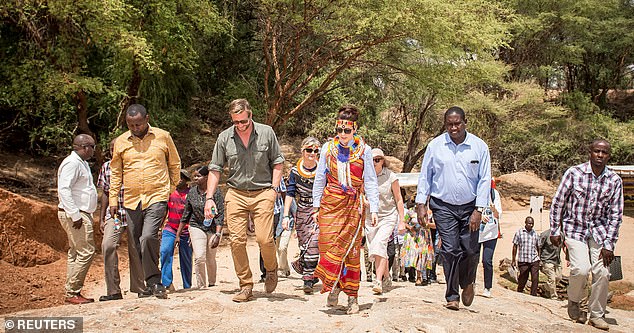 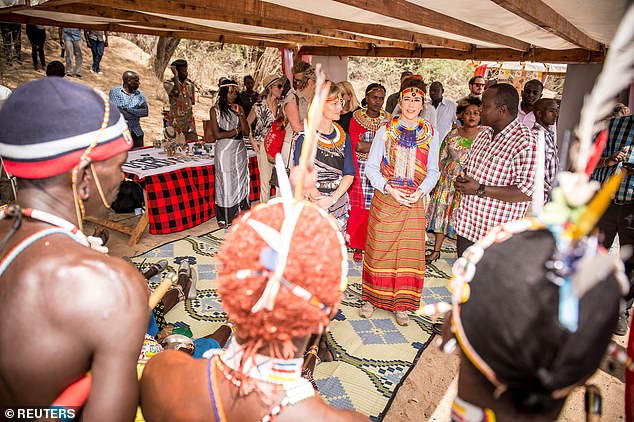 Mary, who was not accompanied by Prince Frederik on the trip, looked relaxed as she met with local women at the reserve