All hail the future Queens! Mette Marit of Norway twins with Victoria of Sweden in a white patterned dress as she joins Crown Prince Haakon for an official visit to Stockholm

Crown Princess Mette Marit showcased her knowledge of seasonal fashion trends as she and husband Crown Prince Hakakon kicked-off their three-day visit to Sweden with stylish photos taken on the steps of Haga Palace.

The Norwegian royal couple were welcomed by Crown Princess Victoria and Prince Daniel as they arrived on Monday to strengthen the neighbourly relations between the two countries.

Crown Princess Victoria, 44, recycled a Malina Maisy Dress which she has previously been spotted wearing at a virtual 2020 Care Gala and for a conference at Stockholm’s University.

The trip was previously postponed several times due to the global covid-19 pandemic.

Today, Crown Princess Mette Marit opted to wear neutral colours donning a white dress with pastel flowers spotted throughout and a delicate bow to draw attention to her neckline.

She teamed the look with a white tartan print duster coat and pink court heels, while styling her blonde hair into loose curls for an elegant appearance.

Prince Daniel of Sweden looked suave in a navy suit styled with a white shirt and burgundy tie.

The European royals looked in good spirts as they gathered at Haga Palace in Stockholm for a group photo to kick-off the state visit. 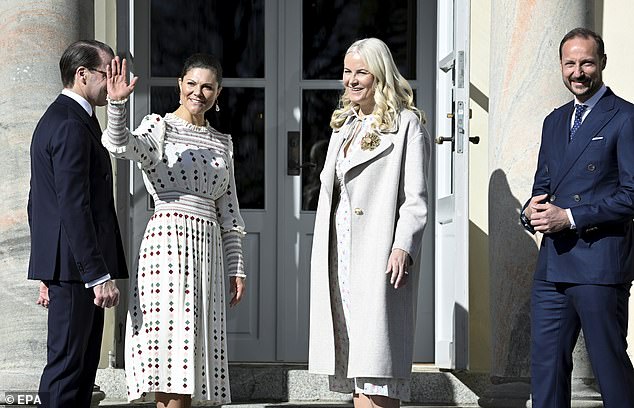 The Norwegian Royal Court previously revealed the trip was planned to mark the ongoing good relation between Norway and Sweden.

Foreign Minister Anniken Huitfeldt and Minister of Trade and Industry Jan Christian Vestre, have accompanied the couple to Sweden where Crown Princess Mette Marit and Crown Prince Haakon are expected to spend two days in Stockholm before going to Gothenburg.

‘The visit will contribute to strengthening the close business cooperation between Norway and Sweden, and emphasis will be placed on the fact that tomorrow’s value creation must be sustainable and knowledge-based. Joining the trip is a Norwegian business delegation, which will meet its Swedish partners at several business events in both Stockholm and Gothenburg,’ Royal Central reports.

Environmental issues including sustainable agriculture and climate-friendly buildings are expected to be covered throughout the tour, with the Norwegian royals also championing their culture and creative industries. 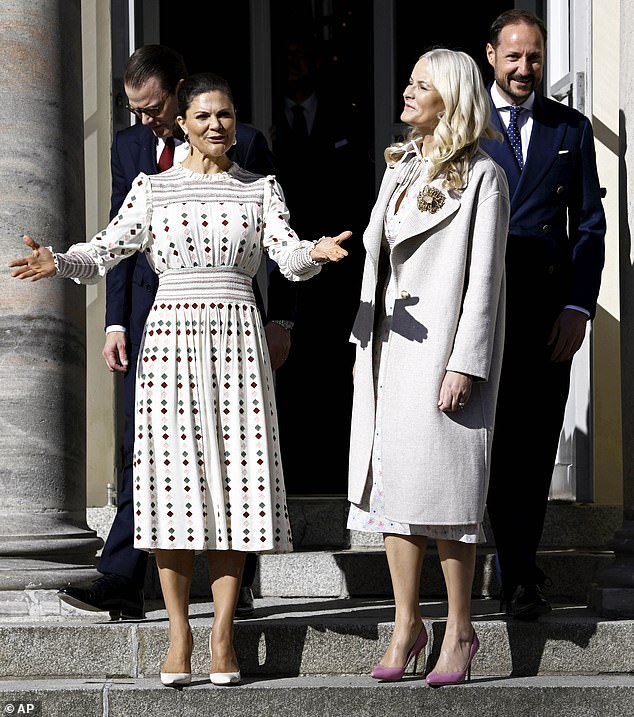 The couple will visit the SPACE-centre and travel to Fryshuset in Stockholm to see the wide range of services for young people.

Crown Prince Haakon who is heir apparent to the throne of Norway, has two children, Princess Ingrid Alexandra and Prince Sverre Magnus with Mette Marit.

She has a child from a previous relationship, 25-year-old Marius Borg Høiby.

Mette Marit was born a commoner, to farmers in Norway and was a single mother by the time of her controversial engagement to Crown Prince Haakon in 2000.

She became Crown Princess after the couple’s marriage in 2001. Mette Marit has spent her reign championing humanitarian projects while joining official visits.

Her first official appearance was at the Nobel Peace Prize ceremony at Oslo City Hall on December 10, 2000, following the announcement of the couple’s engagement on December 1.