The mother-of-two, 45, put her best fashion foot forward in a statement purple gown, featuring an elegant round neck and long sleeves, for the occasion at the Old Stock Exchange building in Stockholm.

It comes as the stylish royal picked her family’s annual Christmas tree as per tradition last week.

Tonight, Victoria dazzled in the form-hugging plum gown, which espoused her slender silhouette.

On the dress, she was wearing her royal sash and her honours, pinned to the outfit with a blue ribbon.

The Crown Princess styled her hair into a bun and kept her accessories to a minimum, with just a round silver necklace adorned with a blue gem and matching earrings. 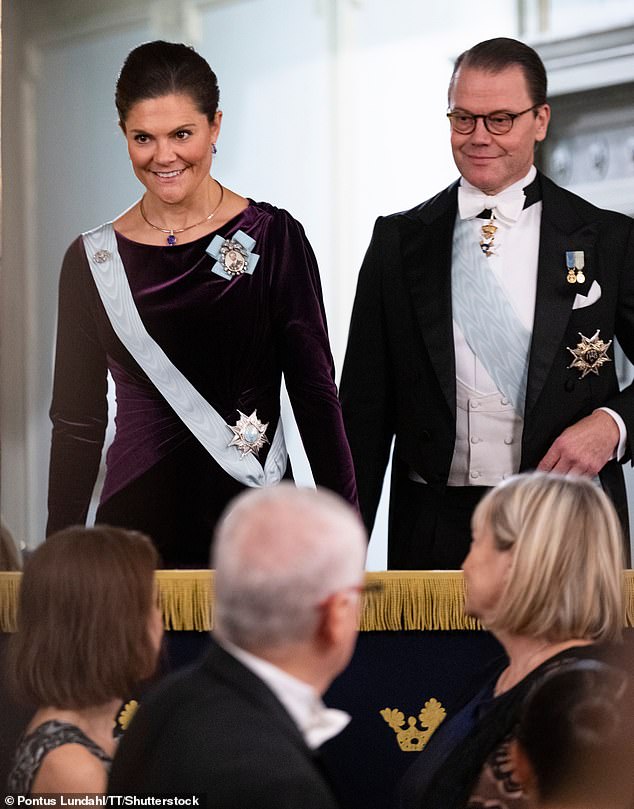 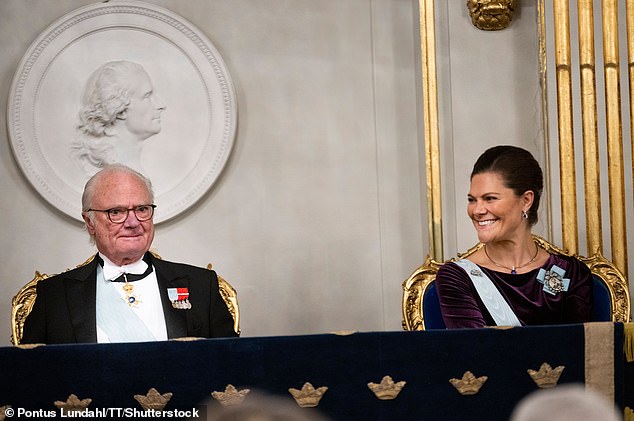 She sported a glamourous evening makeup, with a dash of mascara and bronzer to enhance her natural glow and a nude lip keeping the look effortless.

King Carl Gustaf looked relaxed during the event and seemed to be enjoying the company of his daughter and son-in-law before the festivities commenced. 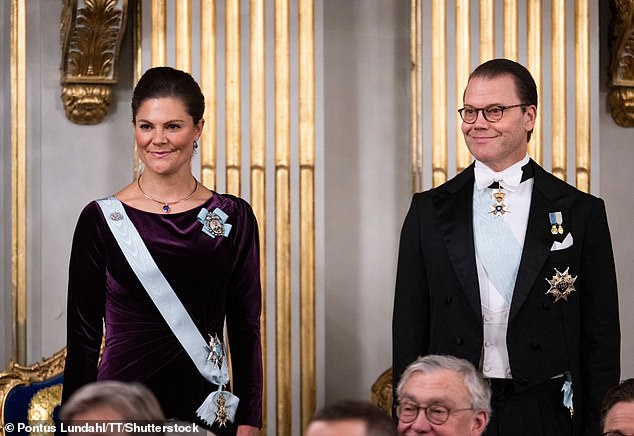 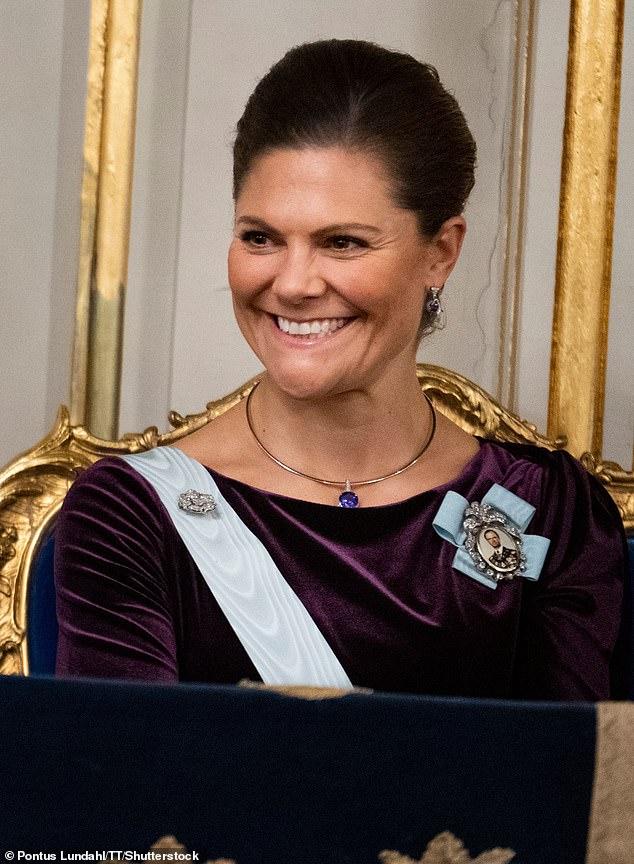 Victoria sported a glamourous evening makeup with a nude lip, with her hair swept into a stylish bun 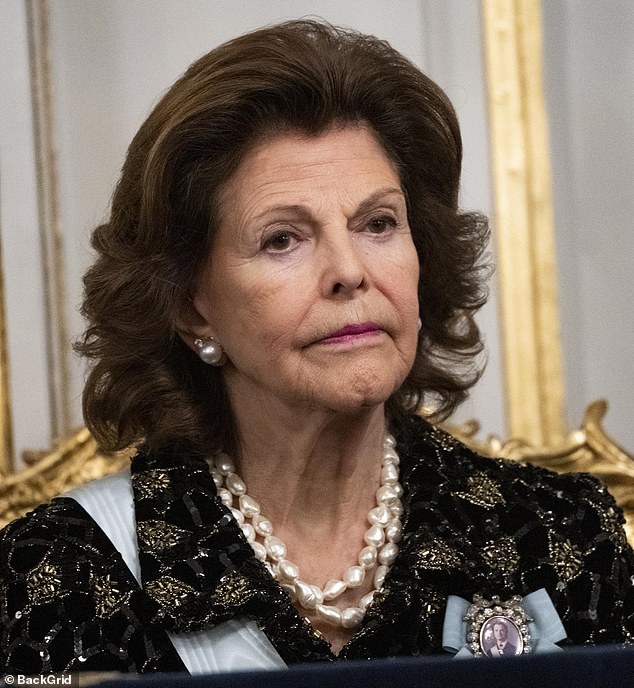 His wife Queen Silvia was also present and donned a glittering black and gold dress, and a sweeping blow-dry.

Last week, Victoria got into the festive spirit by picking the royal family’s Christmas tree.

The heir apparent to the throne was a vision of elegance as she received this year’s Christmas trees in the Royal Palace and chose which spruces would be decorated and displayed. 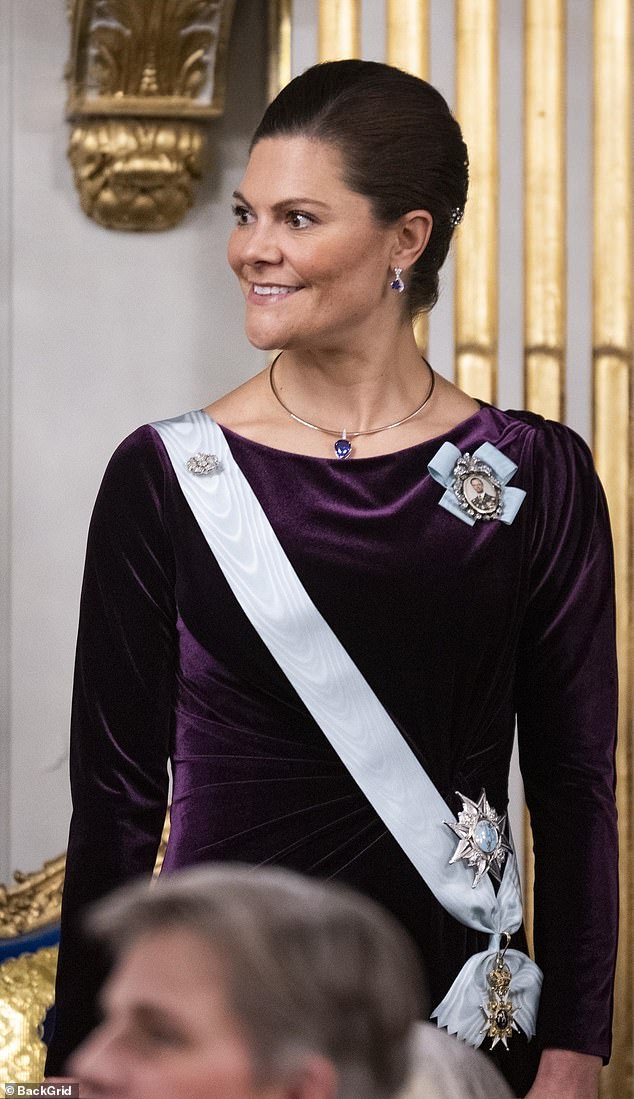 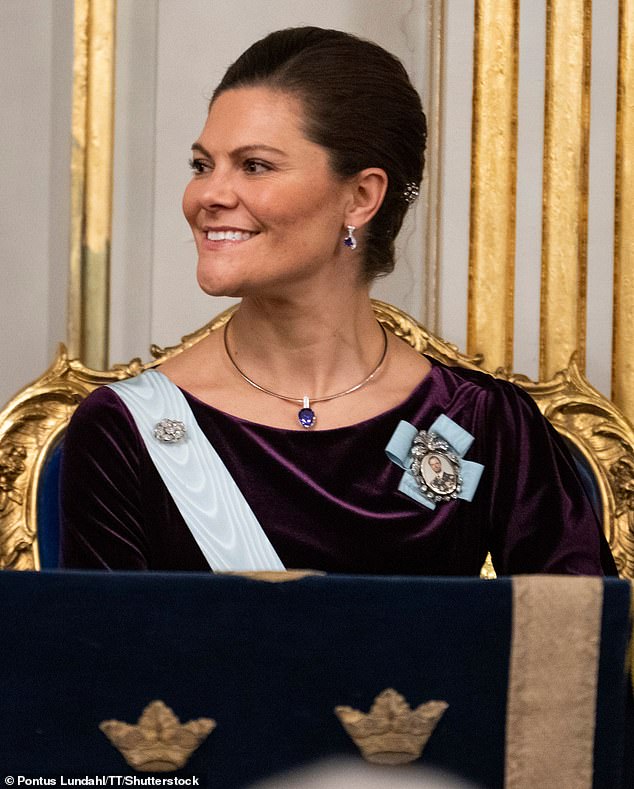 The mother-of-two donned a flowing red ankle-length dress which she paired with a charcoal-coloured jacket to guard against the winter chill.

She finished the look with a stunning pair of high heels, which had a simple dark colour at first glance but wowed with a colourful floral pattern on the side.

The Christmas tree choosing is a tradition of the Swedish family which takes place every year and is observed by all its members.

The tradition sees the royal family welcome students from the master’s program at the Swedish University of Agricultural Sciences (SLU).

The students present the royals with a selection of Christmas trees which they will then choose from to have displayed in the royal palace in Stockholm.

Since the late 1960s, SLU has presented Christmas trees to the Royal Palace. The King’s Cave has got its current name according to this tradition, it was originally called Nordmann’s branch.

Fabulous in florals! Crown Princess Victoria of Sweden looks ethereal as she celebrates her 45th birthday with her husband and children in tow

Relaxed royal! Crown Princess Victoria of Sweden cuts a low-key figure in a pair of jeans and a shirt as she visits a farm in Heby