A big tidy-up is always the order of the day and a small army of construction workers is deployed to make some overdue improvements.

Valletta, the capital of Malta, is no exception …

A metropolitan marvel in the Mediterranean: Valletta is awash with historic architecture

Not at all. Valletta is a small, ancient walled city completely at odds with its immediate urban surroundings. Not many people actually live in the city – although thousands visit each day to savour this architectural masterpiece.

Try to get there before or after the cruise ship hordes block the narrow streets and obstruct the views of the Grand Harbour.

DIDN’T IT BELONG TO BRITAIN?

Malta was a British colony from 1800 to 1964. The Queen and Prince Philip famously spent their honeymoon on the island.

During World War II it sustained terrible bombings, but somehow survived, and it was from here that the Allies disrupted Axis supplies to Hitler’s armies in North Africa, a crucial prerequisite to victory at El Alamein.

Absolutely, and was recognised as such when King George VI awarded the George Cross to the entire island of Malta.

It is the Roman Catholic Knights of St John to whom we owe thanks for this glorious fortress.

The Knights ruled Malta from 1530 to 1798, building what you see today following the Great Siege of 1565 when the Ottoman Empire would have taken the island had it not been for another feat of resistance led by Jean Parisot de Valette (hence the name Valletta).

Mind you, there are red telephone boxes all over the place, plus a pleasing statue of Queen Victoria.

Just wander around and keep your eyes peeled. The Baroque architecture, tempered by the honey-coloured limestone, is an absolute joy.

Enclosed wood balconies are one particular feature and at every turn you come face to face with buildings that make your heart sing. The star turn is St John’s Cathedral, dripping in gold and home to the only signed work and largest painting by Caravaggio. It depicts the beheading of St John the Baptist. 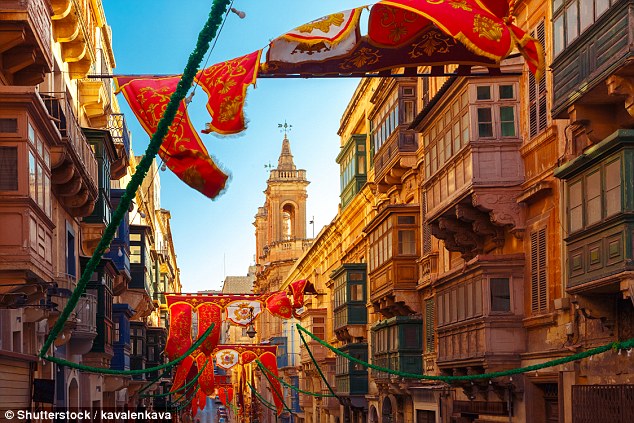 Bright colours, brilliant culture: Valletta will be in the spotlight for the rest of 2018

Walk through the main entrance to the city — which has been newly designed by Renzo Piano (of London Shard fame) — take the shallow steps on your right and make for Upper Barrakka Gardens, once the private garden of the Knights. The views of the Grand Harbour from here the third become the Malta — the first Vittoriosa second have changed little since the mid-1660s and are utterly sensational. Then dive back in among the narrow streets built on a grid system, so you’re unlikely to get badly lost.

The newly revamped Hotel Phoenicia is perfectly positioned just outside the city walls. Rooms are gorgeously bright and cheerful and there’s seven acres of gardens, at the end of which is an ethereal swimming pool practically jutting up against Valletta’s ramparts.

It has two restaurants. One spills onto a huge terrace, where even in winter you can sit out for breakfast.

A spa will open shortly, making it the full package. Rooms from £205 B&B, campbellgrayhotels.com/the-phoenicia-malta.

Rabbit is something of a national dish and fresh fish is always on the menu. Book a table at Rubino (rubinomalta.com) near Republic Square and sit at the front rather than at the back.

There’s nothing modern here. The ramshackle 1906 frontage sets the tone and there are no menus as such.

You choose from a daily selection written up on a board and, with a good bottle of local wine, you’ll be hard-pressed to spend much more than £60 for two people.

Casa Rocca Piccola (casaroccapiccola.com) is a 16thcentury palace that is still in private hands and often described as a ‘living museum.’ Join a tour given by the present Marquis de Piro, who will offer a unique insight into Malta’s past and present.

SAIL IN A GONDOLA

On the waterfront beneath the Upper Barrakka Gardens, take a dghajsa ride (small gondolashaped boats) across the harbour to The Three Cities. It will cost you a maximum €3 (£2.65) per person.

Accept this willingly. If a cruise ship is in the harbour at the same time, you’ll feel very small indeed.

Valletta is not an expensive city, nor is it grand. During its Capital of Culture year there will be all kinds of events, visit valletta2018.org. More information, visitmalta.com