Cruel thug steals an ALLIGATOR from a golf course, swings it around and tries to hurl it onto a roof

Cruel thug steals an ALLIGATOR from a golf course, swings it around by the tail and tries to hurl it onto a roof ‘to teach it a lesson’ in Florida

A Florida man was arrested after allegedly stealing an alligator, swinging it around by the tail and trying to chuck it onto the roof of a business.

Daytona Beach Shores police say they saw William ‘Bubba’ Hodge, 32, of Fort Myers, carrying the gator around 3am Thursday on the A1A highway.

Officers saw Hodge taking the alligator by the tail and slapping it against the roof of Metz Lounge, according to a police report.

Hodge slung the gator over his shoulder and stomped on it twice, according to police.

The man jumped a fence to an alligator enclosure at the Congo River miniature golf course and stole the reptile after a ‘brief wrestling match.’

‘In order to enter the alligator enclosure, one would have to jump the wood and rope fencing that surrounds the enclosure and jump down into the enclosure,’ an officer noted in an incident report. 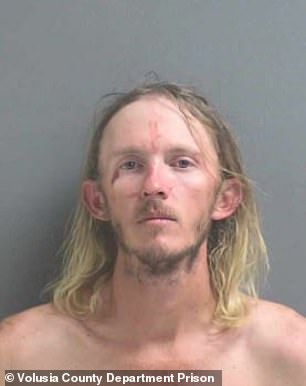 Hodge was charged with animal cruelty, possession and injury of an alligator, unarmed burglary of an unoccupied dwelling, petit theft, and criminal mischief.

George King, the general manager of Congo River Golf in Daytona Beach, later told police the alligator was worth $300.

Hodge immediately raised his hands when approached by police.

When asked what he was doing, Hodge said he was ‘teaching it a lesson,’ but it was not clear what the lesson was for.

He was charged with animal cruelty, possession and injury of an alligator, unarmed burglary of an unoccupied dwelling, petit theft, and criminal mischief.

Later, at a holding cell at the Daytona Beach Shores Department of Public Safety, Hodge began ‘intentionally flooding the jail cell’ by clogging the toilet bowl and floor drain with toilet paper.

Hodge remains in custody as of Friday afternoon.