Cruelty and neglect of girl, six, could have been prevented if care agencies had been ‘more alert’

Cruelty and neglect of girl, six, at the hands of her grandmother and father that left her covered in bruises could have been prevented if care agencies had been more alert to the signs of abuse, report finds

The abuse of a six-year-old girl by her grandmother and her father could have been prevented if care agencies had been more alert, a report has found.

The child – named as Megan to protect her identity – suffered from cruelty and neglect at the hands of her relatives, according to a case review.

Megan was eventually removed from her paternal grandmother’s care in 2015 after being taken to hospital under the guise of being ‘acutely unwell’.

But staff found her covered in bruises – the products of years of physical abuse.

The abuse of a six-year-old girl (stock picture) by her grandmother and her father could have been prevented if care agencies had been more alert, according to a child safeguarding report

Her grandmother and partner and her father were jailed following a trial over the neglect.

Megan is now living in a long-term foster placement and is doing well, according to the Gloucestershire Safeguarding Children’s Board (GCSB).

The group commissioned a report into the girl’s situation to assess what went wrong and why a decision was taken to place her into her grandmother’s care.

A Special Guardianship Order (SGO) was granted in 2012 allowing the woman to take responsibility for Megan.

The review was conducted with the help of several agencies in Gloucestershire, including the local police force, council and NHS services.

The study found that the SGO assessment was not thorough and did not take into account a number of other factors including the financial difficulties of the grandmother and her son’s thoughts and feelings towards Megan. 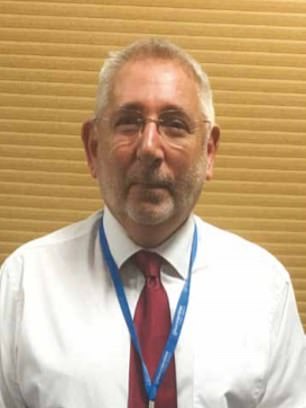 Kevin Crompton (pictured), independent chair of GSCB, claimed the neglect and abuse of Megan could have been prevented if care agencies had been more alert

It also found that professionals lacked awareness and understanding of the signs of neglect and there was too much emphasis on the need to meet court timescales rather than on the best interests of the child.

Kevin Crompton, independent chair of GSCB, said: ‘This is a tragic case and one which could have been prevented.

‘Although the learning from this case has already been implemented by agencies, and the SGO process has been improved nationally and locally, it is still so important to learn from the findings, implement the recommendations and to work to ensure no child is placed in the care of someone like this again.

‘All agencies involved in this SCR are responsible for ensuring children like Megan are safe from abuse and neglect and more can be done to make sure they are.

‘I am glad to say that Megan is now thriving in a long-term foster placement but no child should ever have to experience neglect and abuse like she has.’

Care agencies have been criticised for ‘failing’ a group of children who suffered chronic neglect and sexual abuse for years – despite several warning signs.

The four kids were left to go dirty and hungry by their mother, according to a new report.

In a separate report conducted by the Gloucestershire Safeguarding Children’s Board (GCSB), a study revealed that the eldest also sexually abused his younger siblings over a six-year period.

The GCSB commissioned the report to find out why the neglect was allowed to carry on for a number of years – leading to the abuse by the older child.

The local police force, county council and NHS services in Gloucestershire were all involved in the review.

It found that professionals were overly optimistic about the mother’s promises to improve, did not capture the children’s experiences and lacked curiosity.

It also states that agencies missed opportunities to safeguard and protect the children and failed to carry out appropriate assessments – even though neighbours raised concerns.

The report named them as ‘children of family Y’ to protect their identities.

The mother was charged with and pleaded guilty to several counts of neglect involving her children previously.

She was subsequently jailed.