The Essex-based company, which has seven small to mid-sized cruise liners, said it had ceased trading and closed offices in Australia, France, the US and Germany.

Some of their ships, which have a joint capacity of 7,270 guests, were today pictured at Tilbury Docks as they remain unusued during the coronavirus pandemic.

CMV is the first major British cruise company to go out of business, after Spain’s Pullmantur Cruises and Birka Cruises of Sweden also went under in recent weeks.

Its failure, announced last night, comes despite last-minute hopes of a rescue deal – with attempts to secure a cash injection from investors proving unsuccessful.

Bosses said the collapse would likely result in the company’s UK staff being made redundant and an ‘uncertain future’ for those in other parts of the business.

The industry fears up to 40,000 workers could lose their jobs due to the pandemic, but firms could be allowed to welcome aboard passengers from September.

The Cruise & Maritime Voyages cruise ships Astoria, Vasco da Gama, Blue Sapphire, Astor and the Magellan are all moored at Tilbury docks in Essex today as the company went under 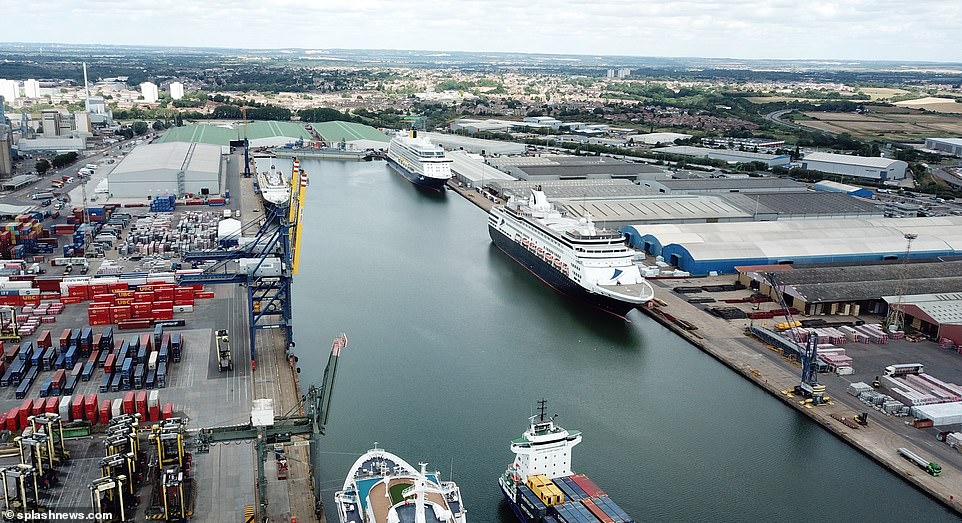 An aerial view of two of the CMV ships in Tilbury today, after the firm went into administration 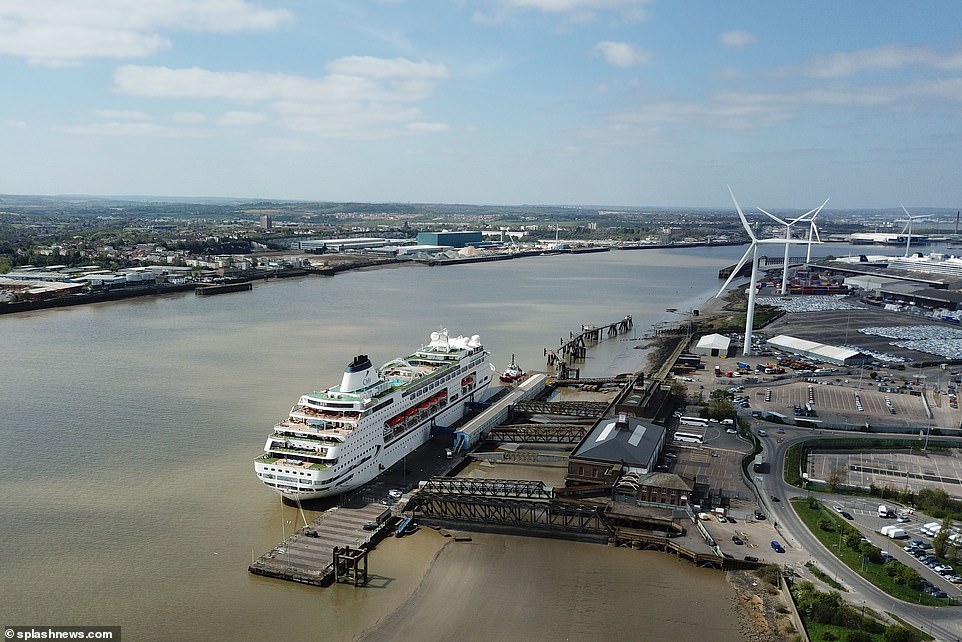 The failure of CMV, announced last night, comes despite last-minute hopes of a rescue deal 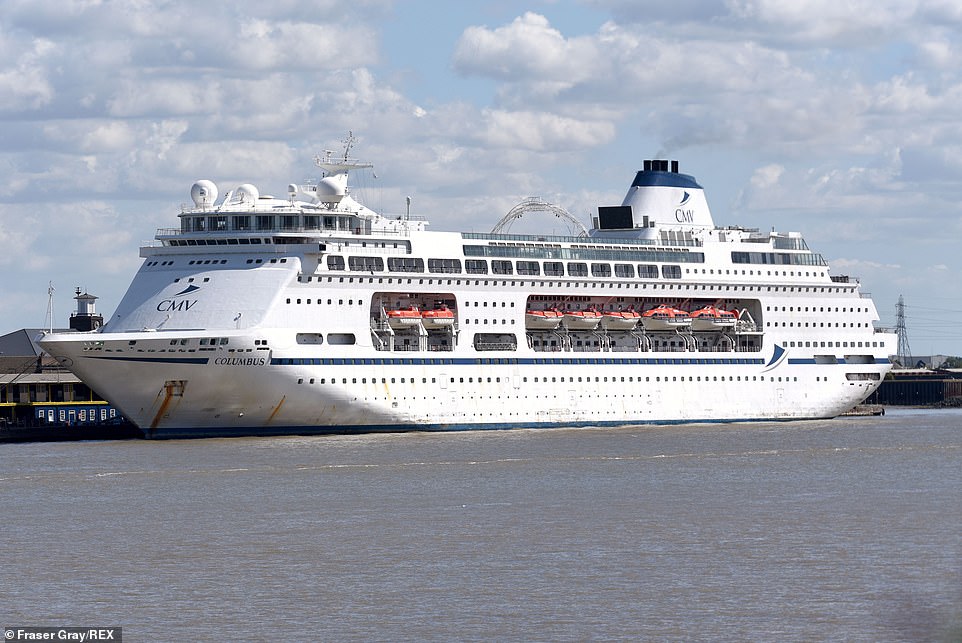 Cruise firms have been under huge financial pressure since the coronavirus crisis began, with most voyages cancelled amid concerns about the pandemic spreading.

Last week the industry was dealt another blow when the Foreign Office advised travellers against all cruise travel, but later updated the policy to allow river cruises.

British Airways plans to cut 12,000 roles, while Ryanair and Virgin Atlantic have said they will both cut 3,000 jobs.

Europe’s largest regional airline Flybe collapsed on March 5 after months on the brink, triggering 2,400 job losses, while easyjet is expected to lose up to 4,500 jobs across its network including around 1,900 in the UK.

The cruise industry fears up to 40,000 workers could lose their jobs due to the pandemic, with 4,000 being affected by the collapse of Cruise & Maritime Voyages last night.

And Christian Verhounig, CMV’s chief executive, added: ‘The directors have all worked tirelessly with CMV’s financial advisors, investment bankers, lawyers, and numerous private equity and hedge fund investors to try and secure the funding required to enable CMV to weather the storm.

‘Unfortunately, CMV was unable to conclude the funding within the timescales required which has led to the administration of the business.’

CMV suspended its worldwide cruise programme on March 13 through to August 25, affecting some 50,000 British and international passengers and dealing a major blow to its revenues.

The business was founded in 2009 and chief executive Christian Verhounig said it had enjoyed a record year in 2019.

But this had ‘tragically been cut short by this unprecedented global pandemic’.

‘We are truly sorry to our loyal and hard-working shoreside staff and seafarers, travel trade partners and suppliers who have all patiently stood by us and to our valued passengers for the disappointment and further disruption to their cruising holiday plans,’ he said.

CMV is believed to be the first major British cruise firm to collapse because of the virus crisis.

The cruise industry is worth £10billion a year to the UK and normally attracts more than two million customers from Britain and Ireland each year.

But since lockdown measures swept across Europe in March, most of the world’s cruise operators and their 400 ships have been unable to accept passengers. 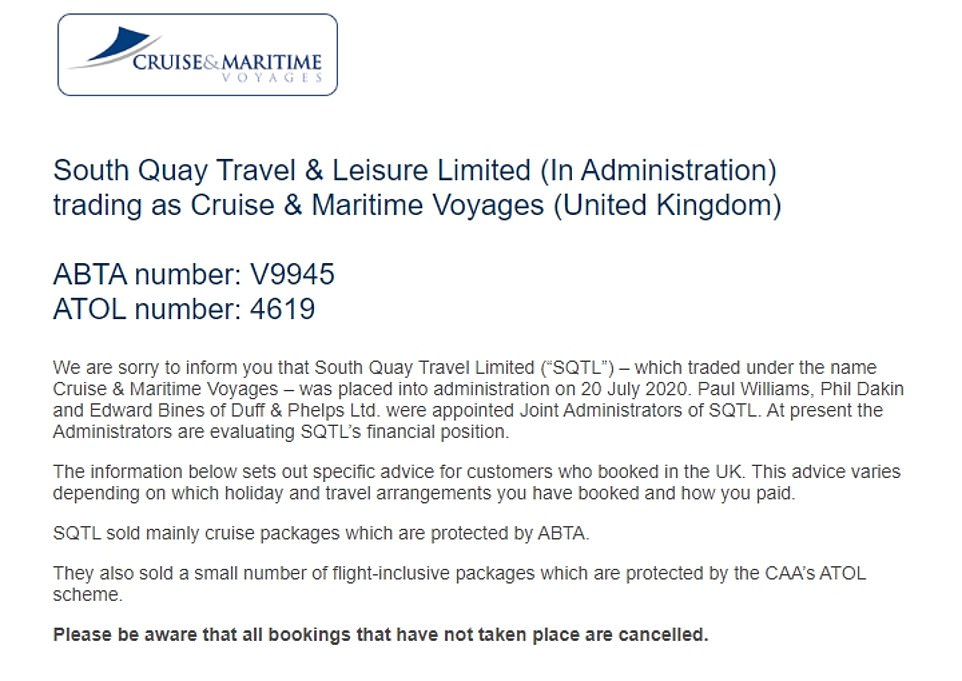 The Essex-based company said it had ceased trading and closed offices in Australia, France, the United States and Germany. The CMV cruise ship Marco Polo is pictured in the Kiel canal

It has dealt a serious financial blow to the companies, with Carnival – the world’s largest cruise provider – saying the cost of keeping all its vessels idle comes to almost £200million per month.

More than 65,000 jobs are at risk across the UK amid the ongoing coronavirus crisis

The dire situation has wiped billions of pounds off the value of cruise operators, with shares in London-listed Carnival down by more than 70 per cent so far this year.

The Mail has highlighted the threat to the industry, while critics have claimed guidance against going on cruises is ‘illogical’ when tourists have been cleared to stay in hotels in many European destinations.

Latest guidance from the Foreign Office means holidaymakers will be allowed to book European river cruises without having to go into quarantine on their return.

The ban on coastal cruises around the British isles remains but there are hopes this will be dropped by September.

Critics said it was ridiculous to prevent British tourists enjoying river cruises in Europe while saying they could stay in hotels in France and Germany.

However, following a public outcry and complaints from the industry, this has changed to advising only against taking a holiday on sea cruises.

Domestic river and canal cruising was allowed from July 4, which triggered a dramatic increase in bookings.

Firms offering European river cruises, such as Riviera and Scenic, are now hoping for a similar boost.

Riviera River Cruises plans to resume a limited number of riverboat cruises at the end of August in countries deemed safe by the FCO such as France and Germany.

While the situation for cruises around UK waters is unclear, the industry hopes these will also win permission soon.

Hurtigruten is hoping to take bookings for cruises departing from Portsmouth, Liverpool or Glasgow from September, with stop-offs including Cornwall, Wales, southern Ireland and the Scottish Isles.

‘The company, which was an Abta Member, was a popular supplier of cruise packages, these bookings are financially protected by Abta . The company also sold a number of package holidays that included flights that are Atol protected.

‘Customers with bookings should be aware that all trips that have not taken place are unfortunately cancelled.

‘Customers that booked trips through a travel agent should contact their agent for help and advice, customers with bookings made directly with Cruise & Maritime Voyages should visit www.abta.com/southquay or www.abta.com/cruiseandmaritime for more information on how to make a claim.’