Crumbling house in Rotorua New Zealand hits the market for $124,000

Crumbling three-bedroom house described as ‘not for the faint-hearted’ hits the market for $124,000 – and buyers are scrambling to get their hands on the property

A derelict three-bedroom home with torn down walls, a damaged roof, and graffiti throughout is at the centre of a buyer’s war since hitting the market.

The home in Rotorua, on New Zealand’s north island, sat vacant for three years before hitting the market for $124,000.

So run-down, vandalised and filled with hazards is the 896sq m block that prospective buyers are warned that viewings can only be carried out by appointment.

The property still has investors jumping at the chance to reinvent the home with 15 expressions of interest lodged since Friday.

The home, which has sat vacant for three years, is in Rotorua, on New Zealand’s north island, and has investors jumping at the chance to reinvent the home since it was advertised on Friday

Black graffiti covers the outside of the home while another tagger has written ‘obey’ in fluorescent paint inside the property’s lounge room.

Images from inside the home shows holes in the walls and parts of the structure pulled down due to water damage.

Glass covered the floor of the kitchen while cupboards sat open and the windows were boarded up.

The property’s fence also has been knocked down and sat lopsided in parts.

An online advertisement for the property said it was not for the ‘faint-hearted’.

‘This property is not for the faint-hearted, but for those with know-how, you are on to a winner here,’ the advertisement read.

‘Bring your hard hat, your tools, and some sturdy footwear and get your due diligence done quickly as this property will not sit around for long! 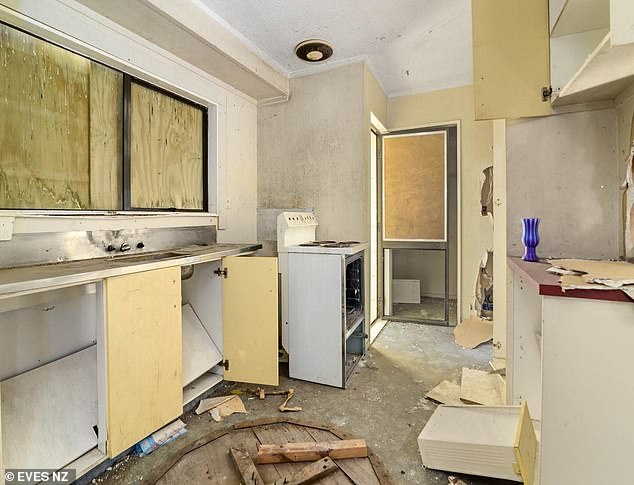 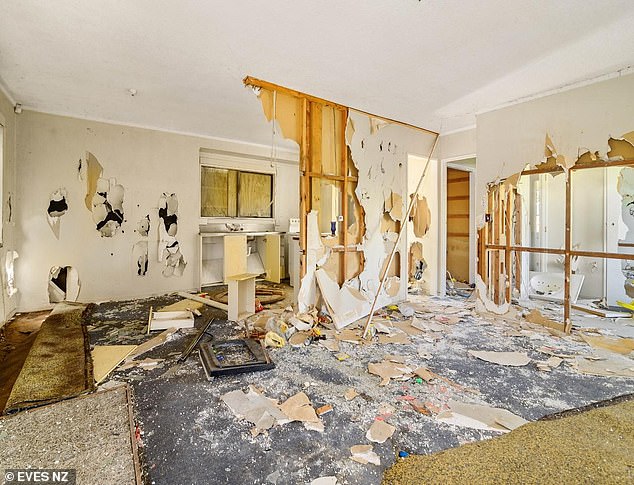 ‘Viewings are strictly by appointment only. Buyers and sellers welcome to view.’

Eves Real Estate agent Kerif Smerdon is one of two realtors attempting to sell the home and she alone has had 15 expressions of interest.

She has one buyer under contract until Wednesday but there is a chance it could fall through so she is taking others offers.

She told New Zealand Herald because of the state of the home people needed to book in order to view it. 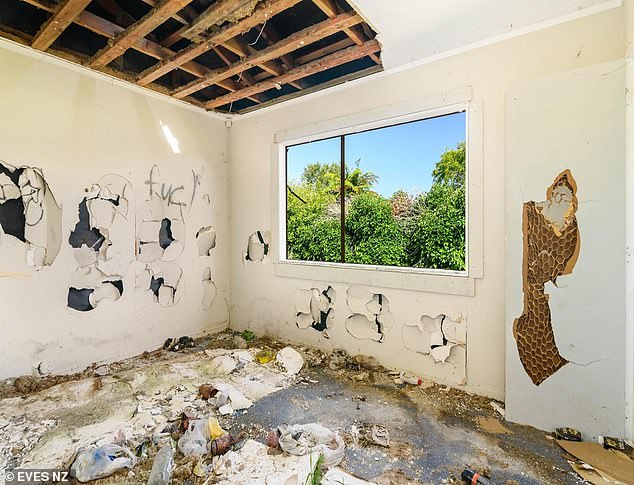 ‘There’s a lot of broken glass, rubbish, everything all through the grass so we’re having no open homes because we don’t want people just rocking up and walking around. It’s quite a hazard.’

She said she hopes the home is structurally sound and it just needs renovation to become livable, but a permit has been done for the buyer.

Ms Smerdon said it is suggested everyone get a builder’s report, as they don’t know what stage the home is currently at.

She said the home is not a ‘typical’ property that would hit the market.

‘No, this one is outside of the box. Rotorua isn’t full of properties like this,’ she said.