Republican Senator Ted Cruz refused to directly answer Democratic Congressman Beto O’Rourke as he questioned him about ongoing police violence against unarmed African-Americans in the United States on Friday.

When asked whether he thought it was a problem in the country, the 47-year-old conservative switched the focus from race when speaking to his liberal competitor.

Instead he suggested it’s a case of protecting law enforcement during the hour-long debate at Southern Methodist University.

Republican U.S. Senator Ted Cruz, left, said that he believes everyone’s rights should be protected, regardless of race at the Southern Methodist University Friday 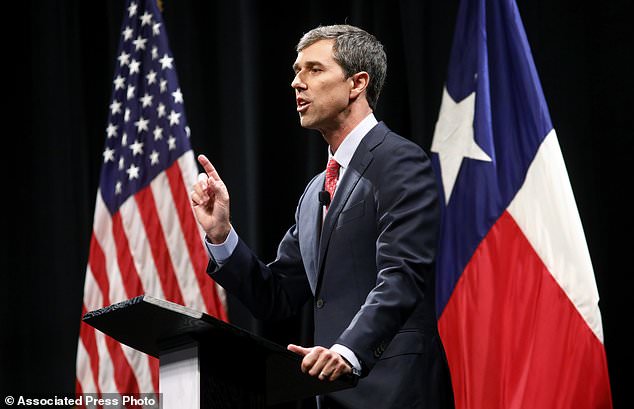 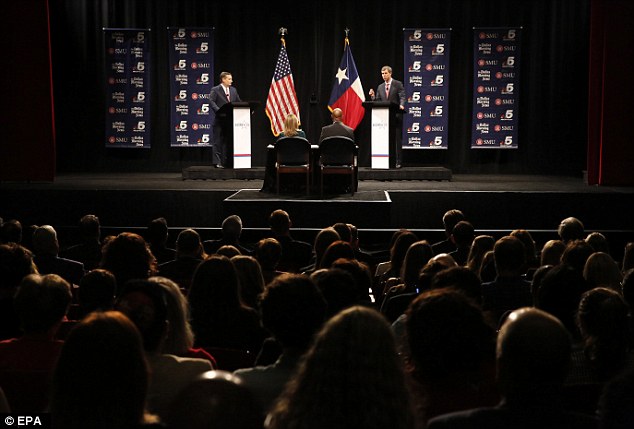 His comments kicked off a series of debates for the US Senate race in Texas.

She claims she accidentally walked into his Dallas apartment thinking it was her home and considered Jean a trespasser.

In August, Caucasian Texas former cop Roy Oliver was found guilty after gunning down unarmed black teenager Jordan Edwards was riding in a car with his brother and friends after a party.

Cruz went on the attack moments after stepping on the stage, saying his opponent suggested that law enforcement officers embodied ‘modern-day Jim Crow’ laws in response to a question about Guyger.

O’Rourke, 45, responded that the accusation was ‘simply not true.’ 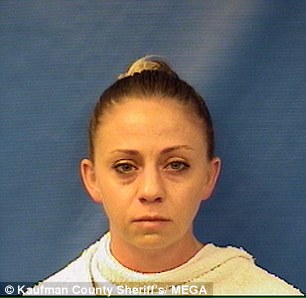 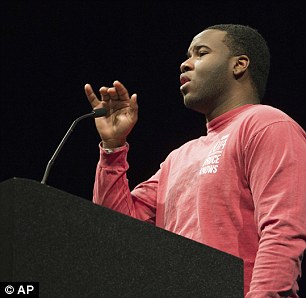 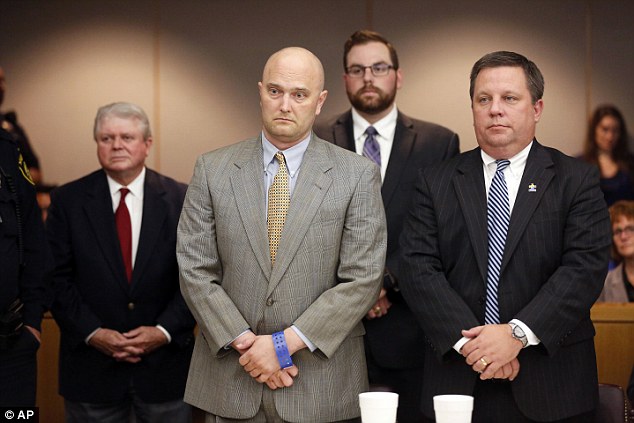 Cruz appeared to be referring to O’Rourke previously suggesting that inherent biases in the criminal justice system promote racism.

Republican Cruz has used his campaign to attack his opponent for defending NFL players’ right to protest police brutality during the national anthem.

Cruz offered no compromise on hardline immigration measures or gun control, months after a mass shooting at a high school near Houston.

O’Rourke, meanwhile, stuck with his gambit that Texas is ready to swing left while defending his support of legalizing marijuana and universal health care.

Cruz admitted that his Democrat competitor was giving him a ‘real race,’ but is banking his re-election on energizing Republican voters who have denied Texas Democrats from winning any statewide office in the last 25 years.

But Cruz often put him on the defensive, clouding his positive message.

When Cruz tried to say O’Rourke wanted to abolish the Second Amendment, the Democrat said it wasn’t so, and the candidates sniped while the moderators pleaded for them to stop and for the audience to stop hooting. 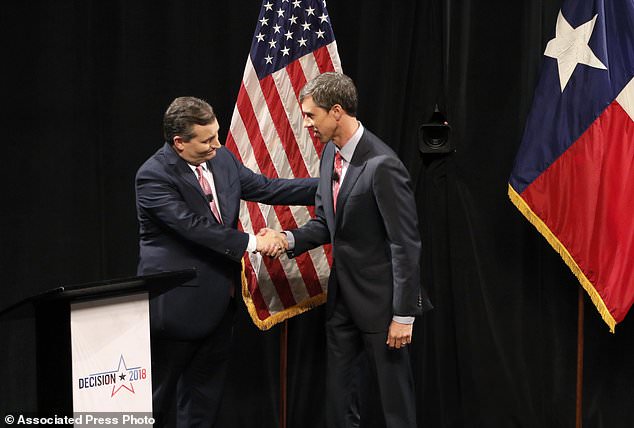 Cruz, left, and O’Rourke, right, battled over gun control and immigration in the first debate 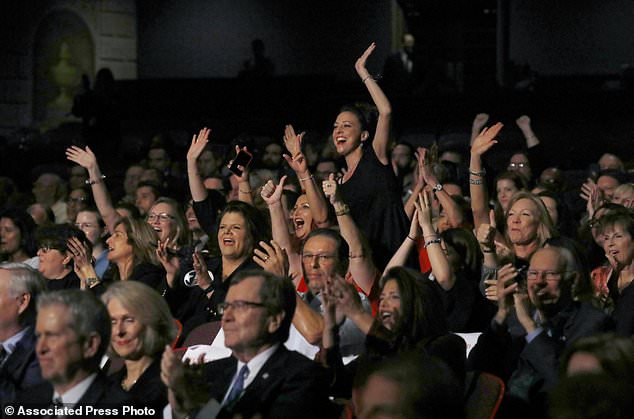 O’Rourke said Texas was ready for a senator who will protect the Second Amendment while imposing small restrictions to save lives and prevent mass shootings.

He suggested those were supported by ‘gunowners and non-gunowners alike,’ and that offering ‘thoughts and prayers’ wasn’t enough.

‘I’m sorry you don’t like thoughts and prayers,’ he said. ‘I will pray for anyone in harm’s way.’

Cruz was also asked whether Supreme Court nominee Brett Kavanaugh’s accuser could say anything that might make him question his support for the nomination.

The incumbent also criticized O’Rourke’s past support for legalizing marijuana, evoking his older half-sister, Miriam, who died of a drug overdose.

O’Rourke, meanwhile, has been open about his 1998 arrest for drunken driving in El Paso, but said for the first time Friday that he did not try to flee the scene, as a witness suggested in the police report. He called the incident a ‘terrible mistake’ 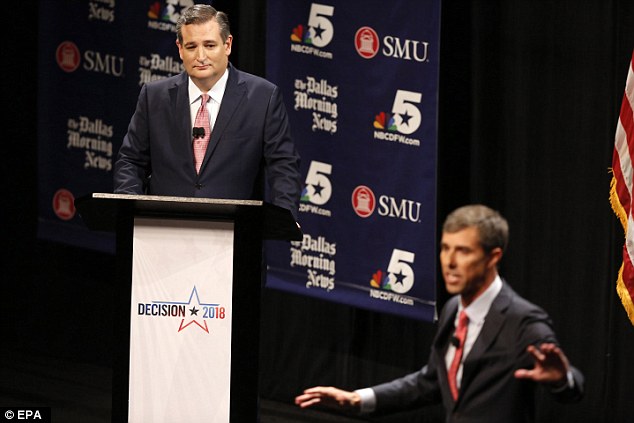 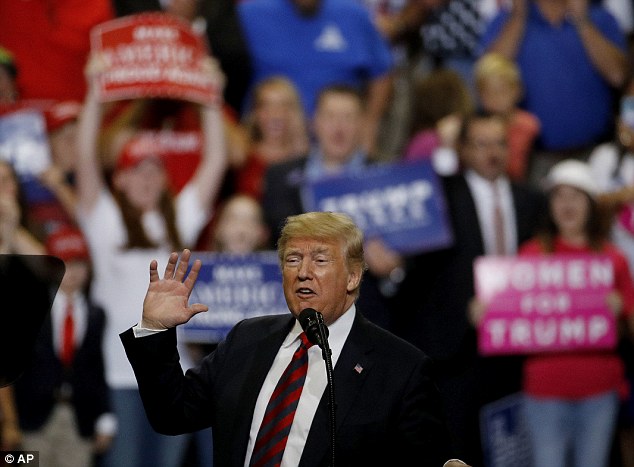 The pair will square off again next weekend in Cruz’s hometown of Houston, and a third and final debate is set for San Antonio three weeks before the November 6 election.

An ex-punk rocker who has attracted glowing attention from national liberal circles for his high-energy campaign and monster fundraising, O’Rourke has been mentioned as a possible 2020 Democratic vice presidential candidate and even a 2020 White House hopeful.

Though he may not knock off Cruz, the argument goes, a close loss could only further boost his national profile.

Cruz finished second in the 2016 Republican presidential primary. But a variety of polls show that O’Rourke is staying within striking distance.

President Donald Trump has announced that he’ll rally in Texas for his once bitter rival Cruz next month – previously unthinkable in a state where Republicans usually rack up landslide victories.