Cuba Gooding Jr.’s lawyers on Thursday argued that they should be able to cross-examine one of his groping accusers about her history as a victim of sexual abuse, the fact that she complained online about having small breasts and that she said she ‘prefers’ threesomes to monogamous relationships when he goes to trial later this year.

The actor, 52, attended court in New York on Thursday for a pre-trial hearing as part of his ongoing groping case where his attorneys alleged police misconduct and tried again to paint him as a victim of malicious prosecution.

He was pictured arriving at the courthouse in Manhattan, wearing a mask, with his attorney Mark Heller. Heller did not have on a mask as he entered the courtroom but he put one on when the proceedings began.

Gooding Jr is facing six groping charges over three alleged incidents which occurred in 2018 and 2019.

One of the women alleged Gooding pinched her buttocks. Another said he squeezed her breast at the Magic Hour rooftop in June last year.

Gooding Jr’s attorneys said on Thursday that the woman speaks openly about the fact that she is self-conscious about her ‘small breasts’ online, and that it can cause her to ‘misconstrue things’.

Cuba Gooding Jr. removed his mask to show off the Black Lives Matter logo on it after a court hearing where his lawyers laid out their intention to quiz one of his accusers about her sexual history, including abuse, and the fact she was self-conscious about having small breasts 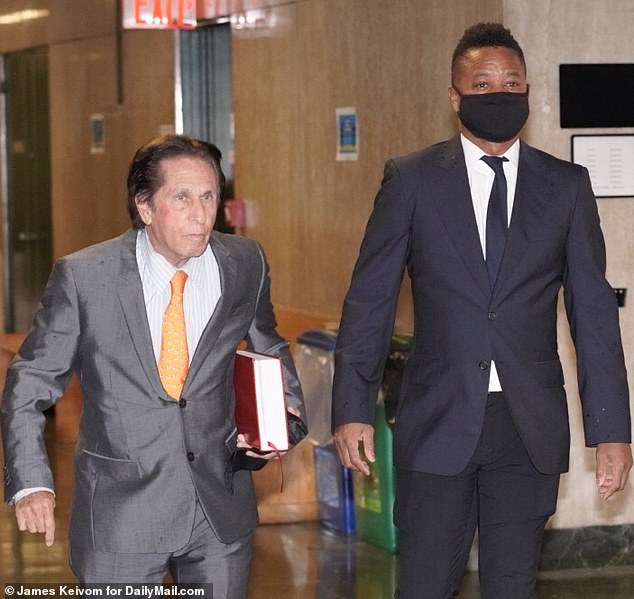 Cuba Gooding Jr. arrives in court in Manhattan on Thursday morning for a pre-trial hearing

‘I believe that her decade long physical and mental abuse by her famly sexual nature and mental is completely relevant to her credibility, to her pre-disposition,  sensitivities, her mindset.

‘It creates a foundation for who she is… she speaks about it in blog posts endlessly on the internet.

‘It is part of who she is, it’s sewn into her personality,’ his attorney said, adding that the woman suffers from ‘distortions’.

He also said it was relevant that she posted online about preferring threesomes to one-on-one sex, saying: ‘This accuser speaks very publicly on her blog posts about her desire and interest and preference to be in menage a trois rather than monogamous relationships.

‘I find it relevant that in this case she represented to the police and DA’s office that there were discussions of menage a trois.

‘She’s a psychology major – it’s a psychological, personality decision. That is nothing to do with her sexual history. It’s philosophical,’ the actor’s attorney said.

The judge disagreed and said it could be discussed only if the woman ‘opens the door to it’.

Of her ‘small breasts’, the attorney argued: ‘I believe it’s very simple: one plus two equals three. 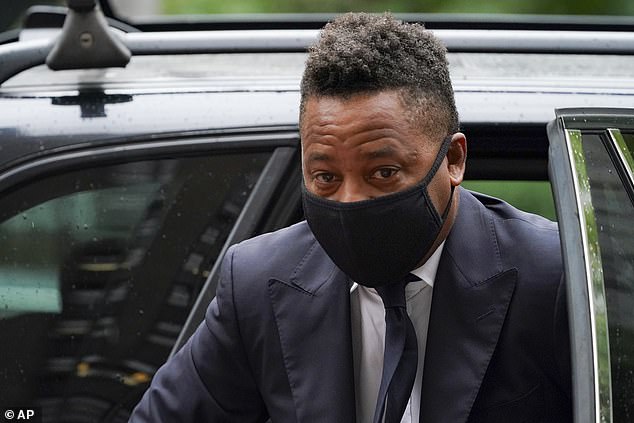 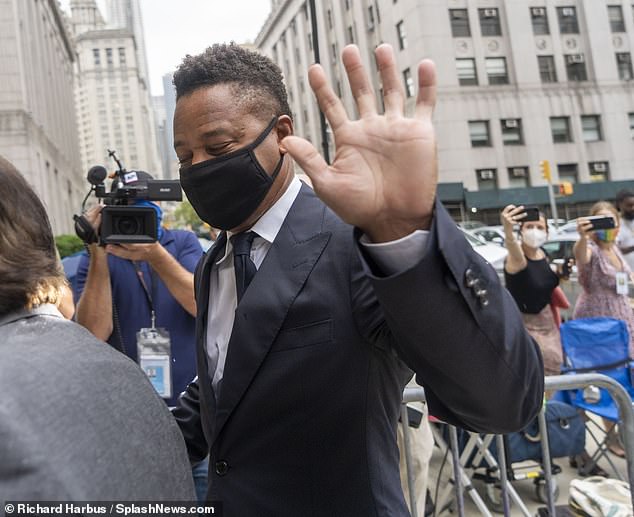 Gooding Jr. waved at photographers who had gathered at the court  before his arrival

Gooding Jr. had been scheduled to go on trial in April, but that was postponed as coronavirus cases surged in New York and the state shut down most court matters.

Now that the number of new positive cases and hospital admissions are down in New York, courts are starting to reopen.

No new trial date for Gooding has been set.

On Thursday, Gooding Jr.’s lawyers argued that detectives acted inappropriately when they started their investigation. Among their complaints was that one sergeant wrote a ‘separate’ police report about one of the incidents which they said was ‘out of character’.

They also claim they refused to interview ‘witnesses’ that they told them to speak to after one of the alleged incidents.

Prosecutors argued that their evidence – which includes screenshots and affidavits – is solid.

The case began last year after he was reported to police for allegedly groping a woman at Magic Hour Rooftop in Manhattan.

After her case took off, prosecutors piled more charges on top including one involving him allegedly groping a woman in Tao in New York in October 2018.

A third set involves an incident in New York City in September 2018.

Heller has tried repeatedly to have the case thrown out. He claims Gooding Jr. is the victim of a malicious prosecution that should never have been launched.

The women involved in the incidents in the criminal case have not been named, nor have the women cited by prosecutors.

A handful who have spoken out in media reports to air their allegations, including a hairdresser from Spokane, Washington, have agreed to be named.

THE CHARGES AND ALLEGATIONS

Gooding Jr. has been charged with forcible touching and third degree sexual abuse – both misdemeanors – for allegedly touching a woman’s breast at the Magic Hour Rooftop in Manhattan this June. He denies it.

The grand jury indictment is connected to a different incident, in October last year at Tao nightclub in Manhattan.

For that incident, he is charged with forcible touching and third degree sexual abuse.

Papers filed by prosecutors on Tuesday also describe 12 other incidents over which he has not been charged but which prosecutors think constitute misconduct. They include:

1) A 2001 incident at the W Hotel where he approached a woman he had never met and ‘rubbed his groin and pelvis against her buttocks while simultaneously grabbed her buttocks and breast with his hand’.

2) A 2003 incident at the Yard House in Long Beach where he allegedly put his hand on another woman’s buttocks and ‘squeezed it’ while they had a photo taken together. He then told her: ‘You’ve got a good piece of a**’

3) A 2006 incident at Chi, a bar in Hollywood, where he approached a woman from behind and ‘bit her shoulder, on her bare back’ twice, then ‘thrust his pelvis’ against her leg and ‘attempted to lift the bottom of her shirt up’

4) A 2007 incident at the Hard Rock Hotel in Las Vegas where, at a ‘movie related event’, ‘forcibly pulled’ a woman towards him and ‘attempted to kiss her’ after calling her and her friends over to his table. He then allegedly ‘licked’ her face and ‘grabbed her buttocks’

The next night, he allegedly grabbed the same woman and placed his tongue against her closed lips

5) An incident at Butter, a now closed nightclub in Manhattan, sometime between 2007 and 2008 where he allegedly grabbed another woman’s buttocks and ‘squeezed’ it as she walked through a crowd

6) An incident in 2011 at a bar in Los Angeles where he allegedly placed his hand inside a woman’s blouse and ‘squeezed her bare breast’ and told her: ‘sit on my face and pee in my mouth’

7) An October 2011 incident at Sfuzzi’s in Dallas, Texas, where he allegedly grabbed a woman’s buttocks and ‘rubbed’ them

11) An incident ‘approximately five years ago’ at Burt’s Tiki Lounge in Albuquerque, New Mexico, where he ‘grabbed a woman’s buttocks’ then told her to stop smoking cigarettes.

12) On August 16, 2018, at the Shore Bar in Santa Monica, told a woman: ‘Damn, you’re hot’, asked if she was married then asked her to lean in closer to him where her proceeded to ‘grab her buttocks and breast and forcibly kissed her, inserting his tongue into her mouth’