Fidel Castro gestures during a speech during a demonstration in front of the US Interests Section in Havana, Cuba

Fidel Castro was born on August 13, 1926, attending Catholic schools before graduating from the University of Havana with a degree in law. Two years later, he ran for election to the Cuban House of Representatives, but the elections were halted by the then dictator Fulgencio Batista.

As a result an enraged Fidel assembled a small force and attacked the Moncada army barracks in Santiago de Cuba in 1953. It failed and most of his supporters were killed or captured. Fidel was himself captured and sentenced to 15 years in prison, but he was pardoned after just two years.

It was during his trial that Fidel delivered his famous ‘history will absolve me’ speech. In it he said: ‘I warn you, I am just beginning! If there is in your hearts a vestige of love for your country, love for humanity, love for justice, listen carefully.

‘I know that the regime will try to suppress the truth by all possible means. I know that there will be a conspiracy to bury me in oblivion. But my voice will not be stifled – it will rise from my breast even when I feel most alone, and my heart will give it all the fire that callous cowards deny it.

‘Condemn me. It does not matter. History will absolve me.’

Fidel went into exile in Mexico where he trained a group of revolutionaries called the 26th of July Movement. In December 1956, his forces, supported by Che Guevara and others, invaded Cuba from the ship Gramma, but suffered serious losses.

However, the revolutionaries hid in the Sierra Maestra mountains, gaining support among the peasants. Eventually, on January 1 1959, Batista fled the island and Fidel assumed power. Relations with the US declined rapidly. In 1960, Fidel took over the US oil refineries in Cuba and the Americans stopped buying Cuban sugar.

He responded by taking over all US businesses in Cuba, and a furious President Kennedy responded with the CIA-bankrolled Bay of Pigs invasion attempt. Various theories have been put forward for the failure of this operation. One was that Kennedy, at the last minute, mysteriously withdrew essential air support, and another was that the president had gravely under-estimated the scale of support for the Marxist Fidel among the Cuban people.

Fidel feared another US attack, and so when Khruschev offered to place nuclear missiles on the island, he agreed. This brought Kennedy and Khruschev into face-to-face snarling conflict, until Khruschev backed down.

Fidel, who was no more than a pawn in this dangerous international conflict, felt let down by the USSR, which nevertheless continued to prop up the island’s otherwise dire economy. Despite this setback, and later the even more damaging effect of the collapse of the Soviet Union, Castro’s omnipotence over Cuba remained undisputed.

During his years in power he reputedly amassed a huge fortune, although he fiercely denied it. The US business and financial magazine Forbes in 2005 listed Fidel among the world’s richest people with an estimated net fortune worth 550 million US dollars. Later, the magazine increased the estimates to 906 million US dollars, amid rumours of large cash stashes in Switzerland.

Fidel himself described these reports as ‘lies and slander’ and said they were part of a US smear campaign to discredit him. He vowed: ‘If they can prove I have a bank account abroad with 900 million dollars, with 1 million dollars, 500,000 dollars, 100,000 dollars or 1 dollar in it I will resign.’ 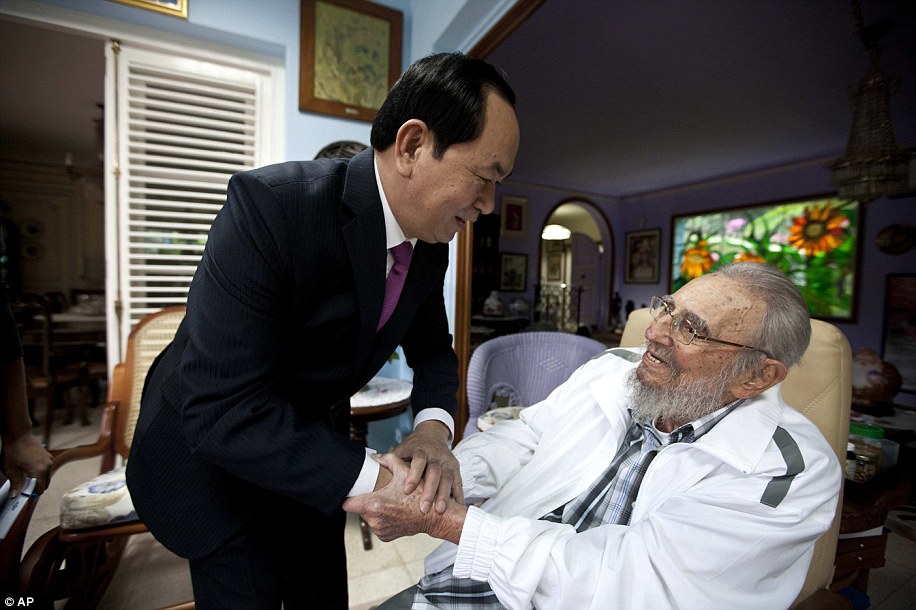 Castro shakes hands with Vietnam’s President Tran Dai Quang in one of the last pictures taken of him before his death, in Havana, Cuba. His brother Raul said on state television that his sibling died on November 25, 2016. He was 90

It was claimed by his supporters that money from state-owned companies was pumped back into the island’s economy and not into Castro’s wallet as was suspected by his enemies. Indeed, Fidel did much to improve education and health services and other social services on the island.

The various assassination attempts were straight from the pages of James Bond. These included an attempt to smuggle a jar of cold cream containing pills into his room, the exploding cigar, a fungal-infected scuba-diving suit and a mafia-style shooting.

Some of these plots were depicted in a documentary entitled 638 Ways To Kill Fidel. He once said in regard to the myriad failed attempts on his life: ‘If surviving assassination attempts were an Olympic event, I would win a gold medal.’

It was in January 2004 that question marks appeared over Fidel’s health, with speculation that he had once had a heart attack, that he had suffered from cancer and that he had neurological problems. None of this speculation was confirmed. In October of that year, he tripped and fell in front of TV cameras following a speech he gave at a rally. He broke a kneecap and fractured his right arm, but was able to recover his ability to walk.

His subsequent illnesses were to transform the strong and strident man of Cuba into a mere physical shadow. But he lost none of his zeal. In April 2016, ahead of his 90th birthday the following August, he gave a speech to the Cuban Communist Party faithful, saying: ‘Soon I’ll be like all the others.

‘The time will come for all of us, but the ideas of the Cuban Communists will remain as proof on this planet that if they are worked at with fervour and dignity, they can produce the material and cultural goods that human beings need, and we need to fight without truce to obtain them.’

His brother Raul Fidel, the president of Cuba, announced his death on state television in Cuba. While Fidel was leading Cuba, the United States went through eleven presidents.