Last year, Melisa Reidy posted a photo on her Instagram account with a caption suggesting her husband of about 18 months had been unfaithful to her. In another post, a user – described by Melisa as a close friend – made the accusation that Russell had “hit” his wife. The post was later deleted. Russell denied the allegation and the two divorced.

Late Thursday, a blog post attributed to Reidy contained more detailed allegations, including years of physical and emotional abuse. Less than 12 hours later, Major League Baseball announced Russell had been put on leave under the 2015 domestic violence agreement between management and the players’ union.

FILE – In this Aug. 21, 2018, file photo, Chicago Cubs’ Addison Russell flips a baseball in the dugout in the sixth inning of a baseball game against the Detroit Tigers in Detroit, Russell was placed on administrative leave Friday, Sept. 21, 2018, following fresh allegations of domestic violence by his ex-wife. (AP Photo/Paul Sancya, File)

“These allegations are completely false,” Russell said in a statement put out by the union. “I made that clear to Major League Baseball last year and reiterated it to the Cubs today. I’m confident any full and fair investigation will fully exonerate me. The protection of my children is foremost in my mind so I will have no further comment.”

Russell can challenge the leave before an arbitrator, and the leave can be extended for additional seven-day periods if the union agrees. He continues to be paid his $3.2 million salary.

MLB said it began an investigation when the allegations became public on June 7 last year.

Last year, Reidy’s attorney, Thomas Field, said she had decided not to talk with MLB because it was not in the best interest of her family. Field did not return messages Friday and no listed number for Reidy, who is believed to live in Pensacola, Florida, could be located.

Chicago Police spokesman Anthony Guglielmi said the department has not launched a criminal investigation “at this point” but detectives will look at the allegations “further and have already reached out to the Cubs.”

The Cubs hold a slim lead atop the NL Central and the leave was announced just a few hours before their 10-4 loss to the crosstown White Sox.

While refusing to speculate on specifics or Russell’s future with the team, Cubs President of Baseball Operations Theo Epstein and owner Tom Ricketts said the team will cooperate with the investigation. They also said they are prohibited from taking their own steps under MLB’s domestic abuse policy.

Epstein and Ricketts said they agreed with MLB’s decision to place the 24-year-old infielder on leave and informed him of the move Friday morning.

“It would have sent the wrong message to have Addison wearing a Chicago Cubs uniform this morning,” Epstein said.

“Obviously, we take it very, very seriously,” added Ricketts. “The place it’s at right now, it’s in the league’s court to do the investigation.”

Manager Joe Maddon said he was surprised by the new accusations.

“I have not yet spoken to Addy about it,” Maddon said. “From our perspective, it seemed like it was done, but apparently it’s not.”

Chicago acquired Russell in a July 2014 trade with Oakland. He helped the Cubs win the World Series two years ago, batting .238 with 21 homers and 95 RBIs in 151 games.

But Russell has been unable to duplicate his production from 2016. He is batting .158 with one RBI in 18 games in September.

Maddon said Russell was playing well defensively, but wouldn’t speculate whether off-field issues were affecting him at the plate.

Epstein and Maddon both said they knew Russell well professionally, but hadn’t talked to him about his personal life.

“I would say I know him in a baseball context,” Epstein said. “One thing we’ve learned as society: You need to take a step back and realize if you know someone in one context, you don’t know them fully.”

Asked if he had counseled Russell after the allegations last year, Maddon said it would have been “inappropriate.”

“Addy and I talk about a lot of things,” Maddon said. “That was not brought up between he and I. I would not even attempt to counsel him. He’ll seek his own counsel.”

Puig and Sano were not disciplined, and suspensions for the others ranged from 15 games for Familia to 100 games for Torres. 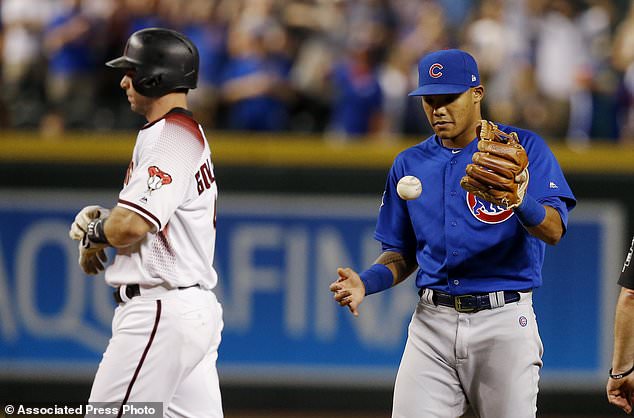 Chicago Cubs shortstop Addison Russell, right, flips the ball in the air after tagging out Arizona Diamondbacks’ Paul Goldschmidt, left, trying to steal second base for the final out during the ninth inning of a baseball game, Monday, Sept. 17, 2018, in Phoenix. The Cubs defeated the Diamondbacks 5-1. (AP Photo/Ross D. Franklin) 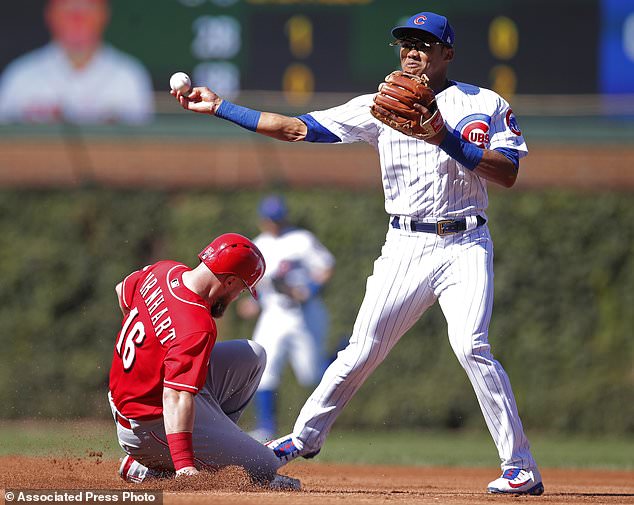 Cincinnati Reds’ Tucker Barnhart, left, is out at second base as Chicago Cubs’ Addison Russell makes the throw to first base during the fourth inning of a baseball game Sunday, Sept. 16, 2018, in Chicago. (AP Photo/Jim Young)