A South Korean religious cult leader who was a ‘God’ to his followers has been jailed for 15 years after he was convicted of raping eight of his female supporters.

Judge Chung Moon-sung told Seoul Central District court that Pastor Lee Jaerock had absolute religious authority over his followers, who were unable to resist him.

The cult leader’s conviction comes after three of his followers went public earlier this year and revealed that Lee had summoned each of them to an apartment before raping them.

The pastor set up the Manmin Central Church in Guro, once a poor area of Seoul, with just 12 followers in 1982.

It has now grown to 130,000 members, with a spotlight-filled auditorium, sprawling headquarters, and a website filled with claims of miracle cures.

Lee was accused as South Korea was swept with a wave of Me Too allegations earlier this year.

Some of his victims talked about their traumatic experiences with the pastor,

One woman, who’d been a church member since childhood, said: ‘I was unable to turn him down. 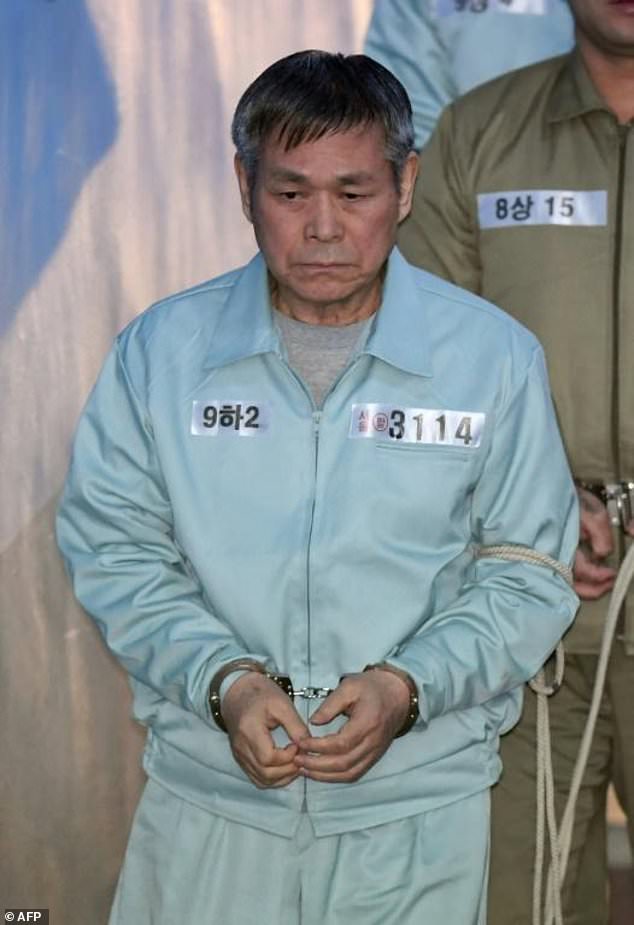 Lee, who denied the charges, stood with his eyes closed as the judgement was read, showing no emotion, while around 100 followers filled the courtroom to overflowing

Lee told another victim that she was now in Heaven and so she had to strip as Adam and Eve went naked in the Garden of Eden.

The woman told JTBC television: ‘I cried as I hated to do it.’

Eight women laid criminal complaints, and the court found Lee raped and molested them ‘tens of times’ over a long period.

‘Through his sermons the accused has indirectly or directly suggested he is the holy spirit, deifying himself,’ the judge said.

The victims believed him to be ‘a divine being who wields divine power’, he added.

Lee showed no emotion and stood with his eyes closed as the judgement was read out against him.

The 75-year-old had denied the charges, his lawyers accusing the women of lying to seek vengeance after being excommunicated for breaching church rules.

Around 100 followers filled the courtroom to overflowing, some of them sighing quietly.

But former members of Lee’s church denounced the pastor outside of the court.

‘The Manmin Central Church is all about worshipping the pastor Lee Jaerock,’ said Kim Yu-sun, who was a member for 20 years.

‘Now that I go to a different church, I worship Jesus and pray to god,’ she added. ‘I’m happy and I like it.’ 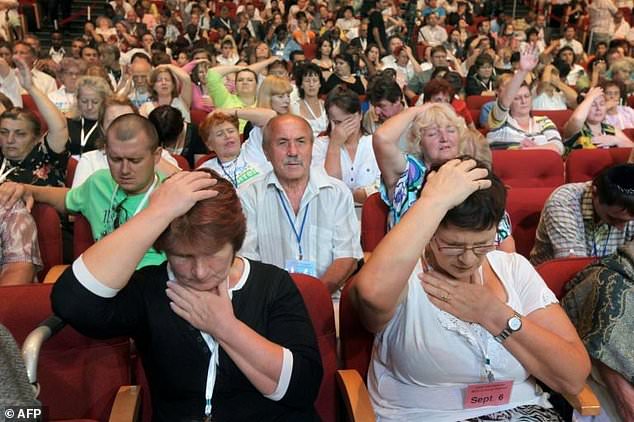 Around 44 per cent of people in South Korea identify themselves as religious believers, with most belonging to mainstream churches.

These more mainstream groups are very wealthy and wealthy with tens of thousands followers who donate up to 10 per cent of their income to the church.

However, there are also fringe groups on the rise in South Korea, with some believing that at least 60 people claim to be divine beings.

Some of those people have been implicated in fraud, brainwashing, coercion, and other behaviour associated with cults worldwide.

According to a 2015 government survey, 28 per cent of South Koreans say they belong to Christian churches, with another 16 per cent describing themselves as Buddhist.

But according to Park Hyung-tak, head of the Korea Christian Heresy Research Institute, around two million people are followers of cults.

‘There are some 60 Christian-based cult leaders in this country who claim to be the second coming of Jesus Christ, or God Himself,’ he told AFP.

‘Many cults point to megachurches mired in corruption and other scandals in order to highlight their own presumed purity and attract believers,’ he added.

On his own website, Lee says that God has ‘anointed me with His power’ but the Manmin Central Church has been condemned as heretical by mainstream Christian organisations, partly because of its claims to miracle healing.

In one example on the church website, Barbara Vollath, a 49-year-old German, said she was born deaf but her bone cancer was cured and she gained hearing in both ears after Lee’s daughter and heiress apparent Lee Soojin prayed for her with a handkerchief he had blessed.

South Korean cults can have deadly consequences: in 1987, 32 members of an apocalyptic group called Odaeyang were found dead at their headquarters after an apparent murder-suicide pact, including its leader, who was under police investigation for embezzlement.

And they can influence the highest reaches of power.

Choi Soon-Sil, the woman at the centre of the corruption scandal that brought down her close friend president Park Geun-Hye, is the daughter of late religious leader Choi Tae-min.

On a mission from God: South Korea’s many cults

The jailing of a South Korean religious leader on Thursday for the rape of multiple followers is the latest example of religious cults in the country.

The world’s 11th-largest economy is technologically advanced but has a history of cult organisations and charismatic religious leaders, some of whom have amassed enormous wealth and influence.

Here are some groups that have previously attracted controversy or had brushes with the law. 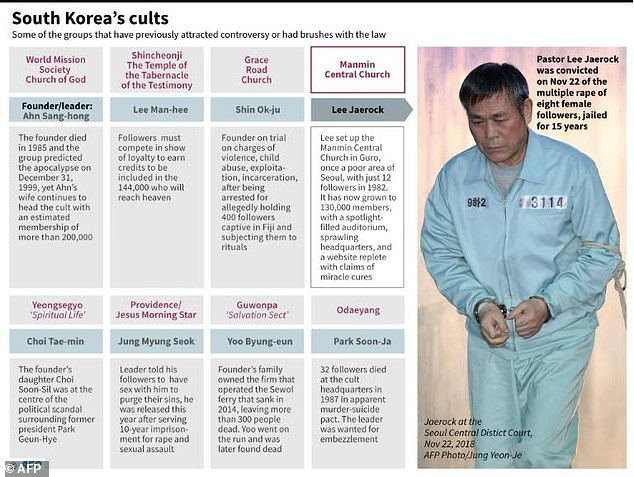 The World Mission Society Church of God predicted the end of the world would come on December 31, 1999.

However, being wrong has been no barrier to its fortunes, and an anti-cult group estimates that it has more than 200,000 followers, although it claims more than two million.

Its founder Ahn Sang-hong, who died in 1985, is worshipped as the Heavenly Father, who it says will come for the salvation of 144,000 souls — the number appears in a biblical prophecy.

Shincheonji, or the Temple of the Tabernacle of the Testimony, suggests that its founder Lee Man-hee has donned the mantle of Jesus Christ and will take 144,000 people with him to Heaven, body and soul, on the Day of Judgement.

But its adherents have long surpassed that number, and critics say they have to engage in endless loyalty competitions to earn credits to be included among the saved, sacrificing their everyday lives and leading to serious family disputes.

Shincheonji ‘is the nation of God, created by Him to fulfil what is in heaven on this earth in today´s time’, it says on its homepage, adding that Lee ‘is creating God´s kingdom of heaven here on earth, exactly as he witnessed it in heaven’.

The female leader of a doomsday cult and three of her acolytes were arrested this year for allegedly holding some 400 followers captive in Fiji and subjecting them to violence and barbaric rituals.

Shin Ok-ju, founder of the Grace Road Church, has gone on trial on charges of violence, child abuse, exploitation and incarceration, among others.

One of South the largest and best-known cults is Providence or Jesus Morning Star, also known by the acronym JMS — which matches the initials of its founder Jung Myung Seok.

He set it up in 1980 as a breakaway from the Unification Church, also known as the Moonies.

Jung was released from prison earlier this year after serving a 10-year sentence for the rape and sexual assault of four female followers.

He told them to have sex with him to purge themselves of sin.

Guwonpa, or ‘Salvation Sect’, came to national attention when the Sewol ferry — whose operating company was run by its leader Yoo Byung-eun and his family — sank in 2014 with the loss of more than 300 lives, most of them children.

On the run from charges of corruption and negligence, Yoo’s body was found in a field, so badly decomposed that authorities were unable to determine the precise cause of death.

In 1987, 32 members of an apocalyptic cult called Odaeyang, meaning ‘five oceans’, were found dead at their headquarters in the southern city of Yongin in an apparent murder-suicide pact.

Among them was the cult’s leader Park Soon-Ja, who had been under pressure from her lenders over $17 million of debts and was under police investigation for embezzlement.

Police said Park’s two sons and a cult official strangled her and 28 others before killing themselves.