The Culture Secretary said she will send the controversial bid to Ofcom and the Competition and Markets Authority amid concerns about the Murdoch family’s influence on the political process.

T But she said she had received thousands of pieces of correspondence during a 10-day consultation on Ofcom’s initial report and was still weeks from confirming the final decision.

Lachlan and James Murdoch wrote to Ms Bradley this week to urge a swift end to the process. Lawyers for Fox have also complained about ‘blatant political interference’ from Ed Miliband and the Labour Party.

A first round probe into the deal last month cleared Fox on a ‘fit and proper person’ and ‘broadcasting standards’ tests but warned putting Sky News under the control of a firm which owns major UK newspapers was potentially a problem.

Ms Bradley told MPs: ‘Given the consultation only closed on Friday, there has not been time to consider all the representations, and I am not in a position today to make my final decision on referral.

‘What I can do, however, is confirm to the House that having carefully reviewed the parties’ representations, and in the absence of further proposed undertakings, I am currently still minded-to refer on the media plurality ground and still minded-not-to accept the undertakings in lieu of a referral.

‘To be clear: as I have said, I must fully consider all relevant representations before reaching a final decision.

OFCOM RAISE FEARS ON COMPETITION ON FOX-SKY DEAL: WHAT HAPPENS NEXT?

Karen Bradley today delayed her final decision whether to send out Fox’s bid to buy Sky for a full review.

Based on the concerns, the Culture Secretary said she is ‘minded’ to send the deal out for a full review.

This triggered a 10-day process for Fox and Sky to try to answer the concerns raised by Ofcom in its initial review.

That process is over but Ms Bradley told MPs today she had not reached a final decision on ordering the next phase.

Going ahead would mean a full public consultation on the deal by regulators.

Assuming the deal passes again, it will eventually be put to a vote of Sky shareholders.

‘And I will take the time I need to look at the many I have received, balancing the need for careful consideration of relevant evidence with the merger parties’ legitimate need for a prompt decision.’

Ms Bradley said she could reach her final decision during the summer recess – meaning the controversial decision could be taken while MPs are away from Westminster.

Shadow culture secretary Tom Watson welcomed the further delay but urged Ms Bradley not to wave through the deal while MPs are away from Westminster.

He told her: ‘We live in a democracy, not a Murdochracy.’

In a statement, 21st Century Fox said it was ‘disappointed’ that Ms Bradley remains minded to refer the bid to the CMA on plurality grounds.

It said: ‘We respect the importance of regulatory scrutiny and we continue in our commitment to work constructively with authorities as we have done since this process began.

‘In light of the transaction’s benefits to the UK creative economy, we would urge the Secretary of State to complete the regulatory process expeditiously.’

On Tuesday, Fox urged the government not to ‘bow to political pressure’ from Ed Miliband and unjustly block their bid to control Sky.

The £11.7billion takeover bid has been met with fierce opposition from the Labour leader who has urged ministers not to ‘do a grubby deal’ with the Murdochs. 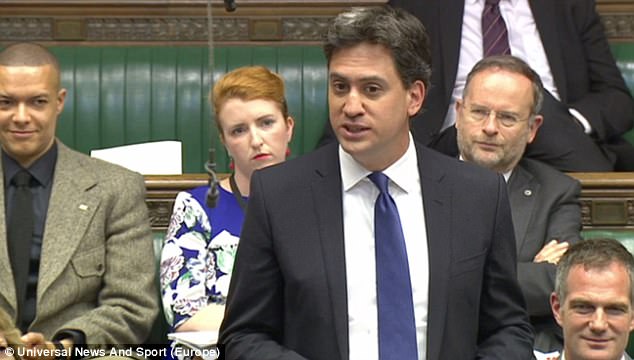 Ed Miliband, pictured in the Commons has urged ministers not to do a ‘grubby deal’ with the Murdochs and to refer the proposed takeover bid to the authorities to consider

But in a furious riposte, Fox accused Mr Miliband of unfair and ‘blatant form of political interference’ in trying to derail the proposed merger.

But in an outspoken intervention, 21st Century Fox urged Ms Bradley to dismiss unfair attacks against it by Labour politicians.

The media company said: ‘Bowing to the political pressure of the Miliband letter would constitute the most blatant form of political interference, and would critically undermine the integrity of the quasi-judicial nature of the Secretary of State’s role in this process.’

It added: ’21st Century Fox trusts that the Secretary of State will dismiss these flagrant political attempts to interfere in the regulatory process and its timing, which are in stark contrast to the respect for the independence of Ofcom that the authors of the letter had until recently promulgated.

WHAT WILL MURDOCH AND FOX OWN IF THE DEAL IS ALLOWED?

In 2013, following the closure of the News of the World, the media mogul split his businesses and Fox then acquired the Sky stake.

The New York-based company now owns a 39 per cent stake in Sky.

It has annual revenues of more than £11billion and is Europe’s leading investment of television content.

The company has a programming budget of £4.9billion. It paid £4.2billion for the rights to show Premier League football for three years from the 2016/17 season.

It also has a deal with HBO – a huge network in the US – to exclusively show a number of television series, including Game of Thrones.

Sky’s revenues rose by seven per cent to nearly £12bn earlier this year.

‘By doing so, 21st Century Fox is confident that the Secretary of State should be able to reach a final decision on a reference to the CMA in the coming days.’

The deadline for receiving formal responses to the proposed merger passed last Friday.

Fox said in its letter – sent on Monday – that Ms Bradley must ensure the case is dealt with ‘expeditiously and fairly’.

Mr Miliband has since joined forces with other MPs including sole Lib Dem leadership contender Sir Vince Cable to claim that Ofcom made ‘fundamental failures’ in its investigation and calling for a full CMA inquiry into the deal.

When the Culture Secretary said a damning initial report by Ofcom raised ‘persuasive’ concerns Fox said it was ‘disappointed’ at the prospect of further delay.

The entertainment giant vowed to press ahead and close the deal by June 30 next year.

If the deal eventually goes ahead it would create Britain’s third biggest news provider, behind only the BBC and ITN. It would bring together the Sun and Times newspaper groups with the Sky News TV channel.

In her ‘minded to’ decision last month, Ms Bradley said: ‘This potentially raises public interest concerns because, in Ofcom’s view, the transaction may increase members of the Murdoch Family Trust’s ability to influence the overall news agenda and their ability to influence the political process and it may also result in the perception of increased influence.’

WHY DID MURDOCH’S BID TO BUY SKY FAIL LAST TIME

An investigation was launched the last time Rupert Murdoch’s organisation wanted to take over Sky because News Corp, 21st Century Fox’s then parent company, owned the Times and the Sun.

Now, the newspaper assets and the film and television studios are two separate companies, meaning technically there are no longer concerns about media ownership in the UK.

But, because both companies have the same owner, there may still be concerns raised.

The 2010 deal ultimately collapsed for political reasons linked to the phone hacking scandal, not because it fell foul of regulators.

Why are people concerned?

As part of its role, Ofcom must ensure that holders of broadcast licences are ‘fit and proper’ – and some politicians and campaigners have questioned whether Murdoch and his family fit the bill since the phone-hacking scandal exploded in 2011.

Murdoch has held a unique position in Britain in years gone by, with former prime ministers such as Tony Blair and David Cameron lining up to secure the blessing of the media mogul and the backing of his newspapers. Critics say this has given him too much say over public and political life in Britain.

The phone-hacking scandal prompted Ofcom to investigate whether Sky was still a fit and proper broadcast licensee due to its links to James and Rupert Murdoch. James Murdoch was at the time a former CEO and chairman of Sky while Rupert Murdoch was linked due to his role at biggest shareholder News Corp.

While it found that James Murdoch ‘repeatedly fell short of the conduct to be expected of him’ during his time running News Corp’s newspaper business, it did not conclude that he had deliberately engaged in any wrongdoing.

Sky was found to be fit and proper. The test is an ongoing requirement facing all broadcast licensees, and lawyers said they did not expect it to feature in any new Ofcom probe.