Cumbria bride trips on wedding dress and breaks her leg

A bride spent her wedding night in A&E after tripping on her wedding dress and breaking her leg.

Newlywed Maggie Curwen, 48, had only just promised to love husband David, 52, ‘in sickness and in health’ at the church ceremony.

But as she later waved guests away she tumbled, broke her left leg and passed out.

‘I don’t know what happened,’ said Maggie, of Egremont, near Whitehaven, Cumbria. 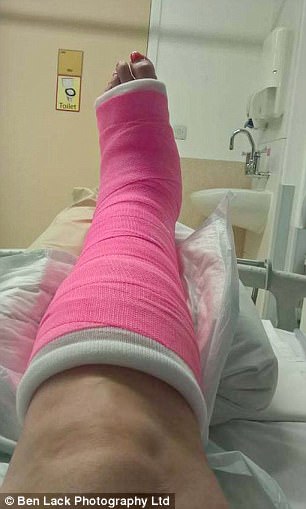 Maggie Curwen, 48, had only just promised to love husband David, 52, ‘in sickness and in health’ at the church ceremony before she tripped on her dress and broke her leg (right)

‘There were about 200 guests and I was just saying goodbye to them before we left to spend the night at the Chase Hotel.

‘I’m not sure if I tripped over my dress or got it caught. I just fell flat.

‘When I came round, my stepson Wayne said my foot was facing the other way.’

Maggie, and her husband David, were married at St John’s Church, Hensingham, on September 30.

The couple, who have been engaged since January 201, held their reception at the Haven Club where David is steward and Maggie runs Maggie’s Catering. 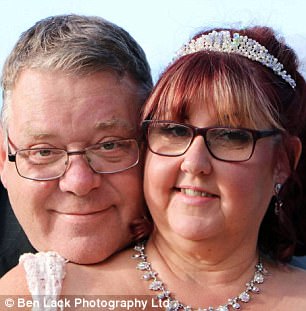 Maggie, and her husband David, were married at St John’s Church, Hensingham

An ambulance was called as Maggie was in and out of consciousness.

‘The ambulance man packed my leg and I remember being carried down the Haven stairs in a chair, seeing my son Harry looking really worried.’

She was taken to A&E at the West Cumberland Hospital where she said: ‘I was told it took three members of staff to take my dress off.

‘I just remember signing the paperwork to be treated and then was operated on for a broken leg and dislocated ankle. I spent my wedding night on a hospital ward.’

Maggie is allergic to morphine.

She said: ‘It was hell. I was just taking paracetamol and codeine it was so painful.’

Maggie was transferred to Carlisle where she remained for several days.

Now, she must wear a full lower leg cast for eight weeks.

‘We’d had a lovely wedding day, it was fantastic,’ she said. ‘We will be rearranging our honeymoon for next year now!’