Amazon announced they were pulling the plug on their New York building plans on Thursday, citing a lack of cooperation between local politicians.

It marked major blow for the city’s mayor and governor who overcame their differences to bring the retail giant to the East Coast.

Cuomo was so furious with Amazon’s decision he released a statement saying the politicians who drove the e-commerce business away should be held accountable.

‘A small group of politicians put their own narrow political interests above their community — which poll after poll showed overwhelmingly supported bringing Amazon to Long Island City — the state’s economic future and the best interests of the people of this state,’ Cuomo said in a statement released on Thursday.

‘The New York State Senate has done tremendous damage. They should be held accountable for this lost economic opportunity,’ he added. 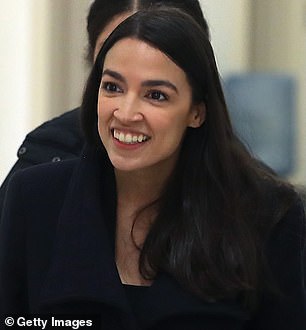 Governor Andrew Cuomo is slamming politicians like Alexandria Ocasio-Cortez for derailing Amazon’s plans to build a sprawling headquarters in Queens, New York. Both politicians pictured above reacting to Amazon’s pull out announcement on Thursday

AOC victoriously tweeted after Amazon announced they were pulling their plans to build a headquarters campus in New York, citing disagreement between local politicians as a concern 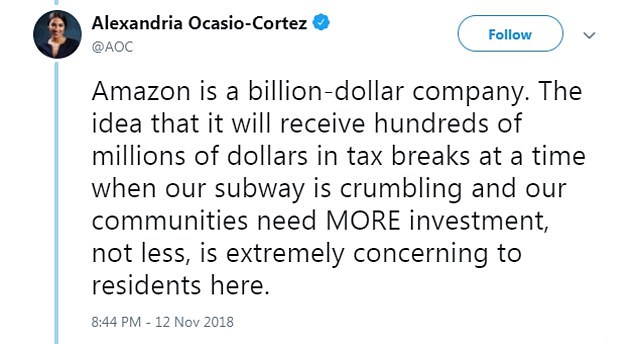 She was among the more high-profile critics of the deal from the Democratic Party’s leftward flank and tweeted her opposition as earlier as last year. Above is a tweet from November 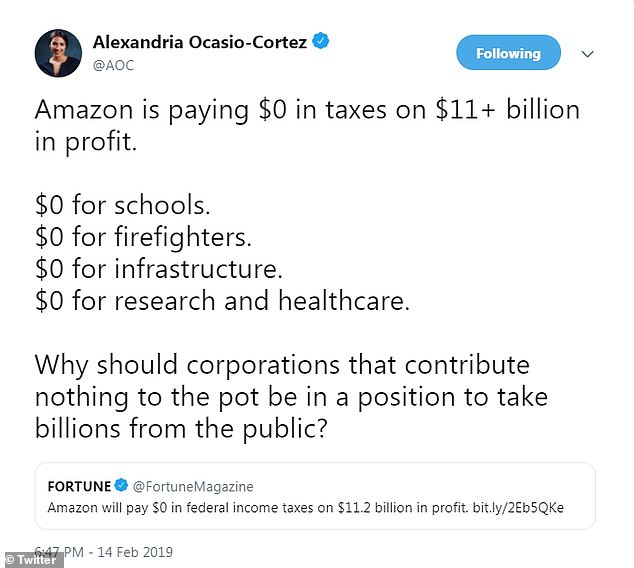 On Thursday she continued to criticize Amazon, pointing out how they paid nothing in federal income taxes yet made a whopping $11billion in profit

His statement didn’t give specific names but zeroed in on Ocasio-Cortez and Senator Michael N. Gianaris.

They have been vocal opponents of bringing Amazon to build in Long Island City, Queens.

The ambitious sprawling 8million square feet campus would have brought an estimated 25,000 jobs to the city, as the city dangled $3billion in return in tax breaks and incentives.

The plan was announced last November and would have created over $10billion in revenue over the next 20 years.

Cuomo said the city lost a golden opportunity to be ‘an emerging center for tech’ and the Amazon move was ‘an extraordinary economic win not just for Queens and New York City, but for the entire region, from Long Island to Albany’s nanotech center.’

Ocasio-Cortez responded to Amazon’s shocking announcement on Thursday with triumph saying: ‘Anything is possible: today was the day a group of dedicated, everyday New Yorkers & their neighbors defeated Amazon’s corporate greed, its worker exploitation, and the power of the richest man in the world.’ 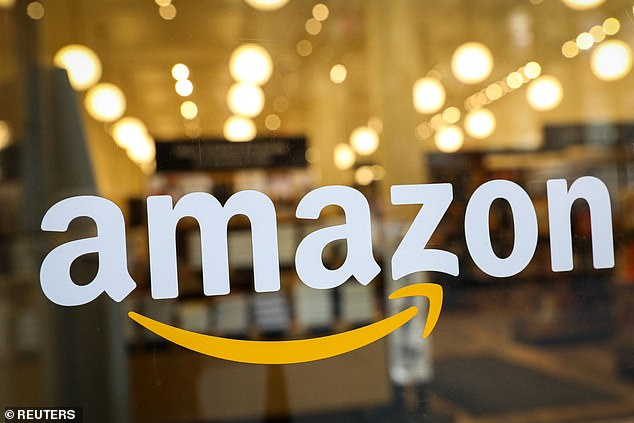 On Thursday Amazon announced its cancelling its plans to build a headquarters in Queens, New York, citing lack of cooperation between local politicians

She opposed the move for its massive tax incentives, previously tweeting such money could be used towards improving the city’s crumbling subway system and investing in local communities.

Senator Gianaris also praised Amazon’s drop out saying ‘today’s behavior by Amazon shows why they would have been a bad partner for New York in any event.

The online retailer announced in November it would be building a complex in Queens, New York as one of two new headquarters.

The other headquarters is planned for northern Virginia.

Nashville, Tennessee was a finalist that was awarded a consolation prize of a 5,000-employee location.

Amazon said on Thursday it did not plan to re-open the yearlong search.

It said the company would proceed as planned in Virginia and Nashville, and continue to hire and grow the 17 corporate office across the U.S. and Canada.

When rumors were circulating that New York would be dropped, Chicago, Miami and Newark were among the passed-over finalists that expressed interest in another chance to become the home of an Amazon project that could bring 25,000 jobs.

Nashville, which was awarded a 5,000-person center, also said it was open to taking on a bigger role should New York withdraw from consideration.

‘Rather than seriously engage with the community they proposed to profoundly change, Amazon continued its effort to shakedown governments to get its way. It is time for a national dialogue about the perils of these types of corporate subsidies,’ he added in a statement on Thursday.

Mayor Bill De Blasio released a statement on Thursday as well, placing the blame on Amazon for ‘throwing away’ the opportunity rather than blaming politicians.

‘You have to be tough to make it in New York City. We gave Amazon the opportunity to be a good neighbor and do business in the greatest city in the world,’ de Blasio said in the statement.

‘Instead of working with the community, Amazon threw away that opportunity. We have the best talent in the world and every day we are growing a stronger and fairer economy for everyone. If Amazon can’t recognize what that’s worth, its competitors will,’ he added.

According to public polls, a majority of New Yorkers supported the creation of a  Queens Amazon office.

The United Food and Commercial union, which represents some New York Amazon employees, criticized the tech giant for pulling out of their New York plans.

‘Amazon showed its true colors today and every American should be outraged,’ the union said in the statement.

‘Jeff Bezos had the opportunity to listen to the voices of working families and support the good-paying jobs New Yorkers deserve. But now we can see this is all about blind greed and Jeff Bezos’ belief that everyday taxpayers should foot the bill for their new headquarters even as the company actively works to eliminate millions of American retail jobs,’ the statement added. 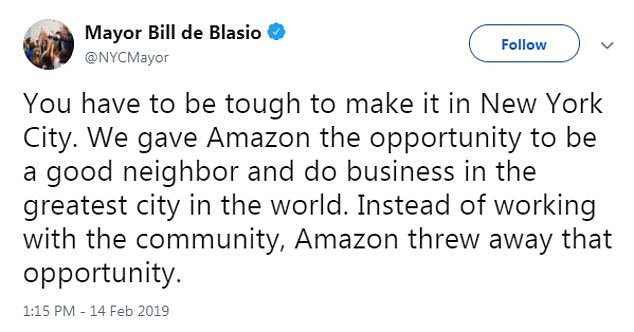 The decision was a serious blow to de Blasio and New York Governor Andrew Cuomo, who had both lobbied intensely to land the campus within city limits

Furthermore polls reviewed by Amazon showed that 70 percent of New Yorkers supported the giant’s plans to build a campus in Queens.

According to a December poll conducted by Quinnipiac University, 57 percent of New York City residents supported Amazon’s plans to move to queens. Just 26 percent opposed the proposal, according to Fox.

Amazon announced its cancelled plans on Thursday in a statement saying, ‘We are disappointed to have reached this conclusion – we love New York.’

‘For Amazon, the commitment to build a new headquarters requires positive, collaborative relationships with state and local elected officials who will be supportive over the long-term.

‘While polls show that 70 percent of New Yorkers support our plans and investment, a number of state and local politicians have made it clear that they oppose our presence and will not work with us to build the type of relationships that are required to go forward with the project we and many others envisioned in Long Island City.’

After much thought and deliberation, we’ve decided not to move forward with our plans to build a headquarters for Amazon in Long Island City, Queens. For Amazon, the commitment to build a new headquarters requires positive, collaborative relationships with state and local elected officials who will be supportive over the long-term. While polls show that 70% of New Yorkers support our plans and investment, a number of state and local politicians have made it clear that they oppose our presence and will not work with us to build the type of relationships that are required to go forward with the project we and many others envisioned in Long Island City.

We are disappointed to have reached this conclusion – we love New York, its incomparable dynamism, people, and culture – and particularly the community of Long Island City, where we have gotten to know so many optimistic, forward-leaning community leaders, small business owners, and residents. There are currently over 5,000 Amazon employees in Brooklyn, Manhattan, and Staten Island, and we plan to continue growing these teams.

We are deeply grateful to Governor Cuomo, Mayor de Blasio, and their staffs, who so enthusiastically and graciously invited us to build in New York City and supported us during the process. Governor Cuomo and Mayor de Blasio have worked tirelessly on behalf of New Yorkers to encourage local investment and job creation, and we can’t speak positively enough about all their efforts. The steadfast commitment and dedication that these leaders have demonstrated to the communities they represent inspired us from the very beginning and is one of the big reasons our decision was so difficult.

We do not intend to reopen the HQ2 search at this time. We will proceed as planned in Northern Virginia and Nashville, and we will continue to hire and grow across our 17 corporate offices and tech hubs in the US and Canada.

Thank you again to Governor Cuomo, Mayor de Blasio, and the many other community leaders and residents who welcomed our plans and supported us along the way. We hope to have future chances to collaborate as we continue to build our presence in New York over time.