New York Governor Andrew Cuomo and former ‘Sex and the City’ star Cynthia Nixon swapped insults and clashed over policy Wednesday in their only scheduled debate before the September 13 Democratic primary.

During the hour-long exchange at Hofstra University, the governor accused Nixon of donating to Mayor Bill de Blasio as ‘a corporation’ in exchange for special favors throughout the city – which Nixon denied.

Cuomo said: ‘My opponent, as a corporate donor to the mayor, called the mayor’s office for special favors for her friends.’

She requested no helicopters above “Shakespeare in the Park” so people could hear. pic.twitter.com/D0BAcGJWxe 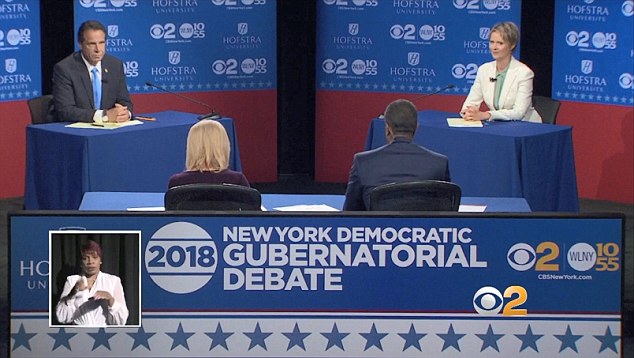 Nixon added: ‘I have never, nor could, donate to anyone’s political campaign. I donate through my own personal funds.’

Cuomo continued to call Nixon ‘a corporation’ before she said: ‘I am a person.’

Nixon added during the debate that the only favor requested was to stop helicopters from flying over the free ‘Shakespeare in the Park’ – an open-air theater that takes place in Central Park.

While the testy exchange featured plenty of interruptions and insults, neither candidate landed the political equivalent of a knockout blow likely to significantly alter the race.

Cuomo did make news during the debate, saying in response to a question about his political future that he plans to serve a full four years and will not run for president if elected to a third term.

Cuomo had been considered a potential presidential contender.

Nixon, a longtime liberal activist, went after the incumbent early in the debate, calling Cuomo corrupt and a liar.

She accused him of empowering Republicans in Albany and not doing enough to address political corruption, income inequality or New York City’s aging subways.

‘I’m not an Albany insider like Gov. Cuomo but I think experience doesn’t mean that much if you’re not good at governing,’ she said.

Cuomo responded by saying Nixon ‘lives in a world of fiction’ and doesn’t understand the challenges of leading the nation’s fourth largest state.

‘It’s about doing. It’s about management. This is real life,’ Cuomo said.

‘You’re in charge of fighting terrorism. You’re there in case of fires and floods and emergencies … and today you’ve got to deal with Donald Trump. You need to know how to do it.’

Polls suggest Cuomo has a more than 30 percentage point lead over Nixon, who also trails substantially in fundraising.

Observers had predicted that Nixon would attempt to rattle the governor in the hopes that he would misspeak.

‘Can you stop interrupting?’ Cuomo asked at one point.

‘Can you stop lying?’ Nixon fired back.

Nixon attempted to tie Cuomo to the recent conviction of his former top aide, Joe Percoco, on charges that he accepted bribes from companies seeking state economic development funds.

She said Cuomo was either complicit or ignorant about what was going on in his administration. ‘Either corruption or incompetence, which is it?’

Cuomo responded that he didn’t know about Percoco’s activities and said he would push for greater ethics reforms if re-elected.

While several of Nixon’s attacks appeared to irritate the governor, they did not provoke any significant gaffes – such as the governor’s comment earlier this month that America ‘was never that great.’ Cuomo later said the remark was ‘inartful.’ 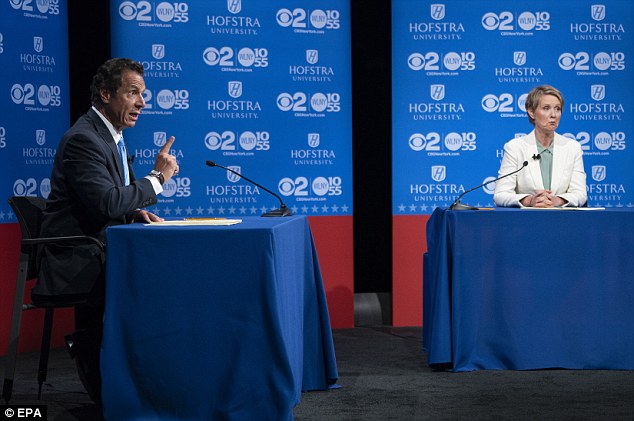 Hofstra University political scientist Craig Burnett said he didn’t see a clear winner in the debate, and that both candidates can claim some accomplishments.

Nixon, he said, had an opportunity to lay out her progressive vision for the state, whereas Cuomo held his own and avoided any serious missteps that could go viral and change the race.

Cuomo had been considered a possible presidential contender in 2020 but he brushed off that speculation when asked by a moderator if he would pledge to serve four years if re-elected.

The candidates also were asked whether they would seek the endorsement of New York City Mayor Bill de Blasio, a liberal Democrat who has had a long, frosty relationship with Cuomo. Nixon has been a close ally.

Neither candidate said yes. Nixon said she’s running her own campaign and isn’t taking direction from anyone, while Cuomo said that he wouldn’t try to tell the mayor how to vote.

Registered Democrats outnumber Republicans in New York by more than 2-1. 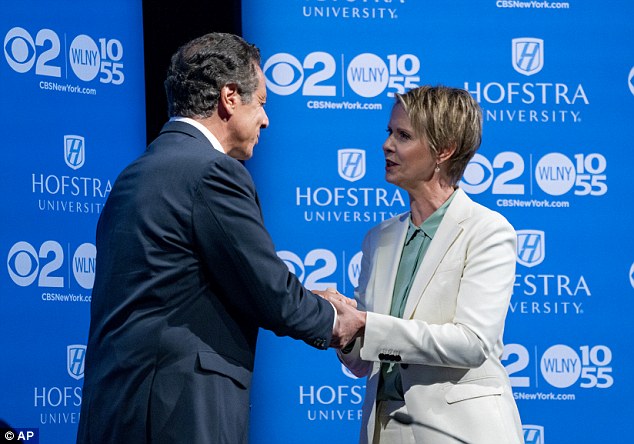 Cuomo, left, shakes hands with Nixon before their debate at Hofstra University in Hempstead on Wednesday