Curiosity Mars rover halts all science operations because of glitch

Nasa’s Curiosity mission has ground to a halt on Mars after a glitch forced the $2.5 billion (£2 billion) rover to terminate all of its science experiments.

Mission team members say the inter-planetary science lab can no longer beam data stored in Curiosity’s memory banks back to Earth, effectively rendering it useless until the issue is resolved.

Researchers said they are unsure what triggered the computer glitch and that it could be ‘some time’ before engineers manage to diagnose and fix the problem.

Mission team members are also preparing to fire up the backup computer inside Curiosity, in case they need the separate system to diagnose the mysterious issue plaguing the main computer.

It follows one of the biggest Martian dust storms on record, which at its peak covered covered 14 million square miles (36 million sq km), knocking out Nasa’s solar-powered Opportunity rover for three months.

Curiosity weathered the storm as it runs on a nuclear-powered battery and so does not rely on the sun’s rays to fuel its operations.

Mission team members say Nasa’s Curiosity rover (file photo) can no longer beam the data stored in its memory banks back to Earth, effectively rendering it useless until the issue is resolved

Researchers said barring the glitch, Curiosity is ‘otherwise healthy and responsive’, and can still stream real-time data about its status back to mission control.

This data should allow Nasa to diagnose and patch the problems with the main computer.

‘Engineers are expanding the details the rover transmits in these real-time data to better diagnose the issue,’ Ashwin Vasavada, of Nasa’s Jet Propulsion Laboratory (JPL) in Pasadena, California, wrote in an update Wednesday.

‘Because the amount of data coming down is limited, it might take some time for the engineering team to diagnose the problem.’

This is not the first time Curiosity has experienced issues with its computer systems.

The backup system, which is identical to the primary computer, served as Curiosity’s primary system for the rover’s first 200 sols on the Red Planet before it started to experience issues of its own.

Vasavada wrote: ‘While the engineers work to understand the problem, Curiosity’s science team is using the time to pore over data gathered on Vera Rubin Ridge and come up with the best location for another drilling attempt.

‘We’re looking at any clues that tell us the rocks are weaker and better for drilling. As the JPL-based project scientist, I really enjoy watching our scientists from all over the world take on these challenges.

‘And, I also get to witness the brainpower that JPL brings to bear when the rover has a technical issue. We’re rooting for the engineering team 100%!’

The rover’s last significant release was a ‘selfie’ unveiled by Nasa September 7.

A thin layer of dust is visible on Curiosity, the result of the huge storm that enveloped Mars this summer.

The darkish sky indicated dust was still clogging the atmosphere in August, when the panorama was shot by Curiosity’s mast camera. 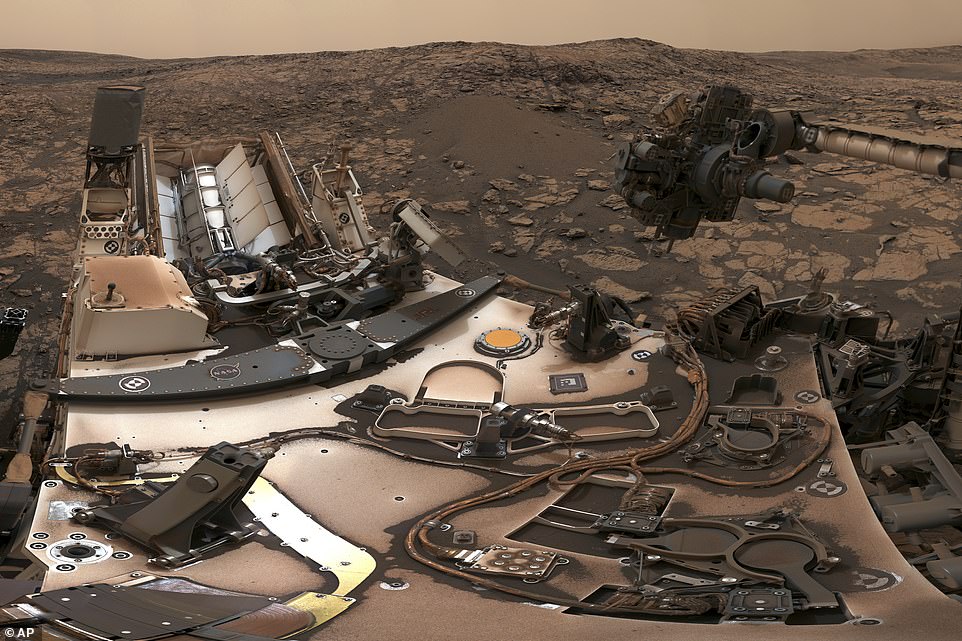 Curiosity’s last significant release was a ‘selfie’ unveiled by Nasa earlier this month (pictured). A thin layer of dust is visible on Curiosity, the result of the huge storm that enveloped Mars this summer. Nasa’s Curiosity mission has now ground to a halt due to a glitch that forced the $2.5 billion (£2 billion) rover to terminate its science experiments

WHAT IS THE MARS CURIOSITY ROVER AND WHAT HAS IT ACHIEVED SO FAR?

It was launched on the Mars Science Laboratory (MSL) spacecraft and the rover constituted 23 per cent of the mass of the total mission.

A striking image shared by the space agency in June showed the dramatic atmospheric changes caused by the ‘planet encircling’ event, with sites that were once clearly visible shown to be obscured by red-tinted dust.

he sunlight-blocking haze has hit the highest levels the mission has ever recorded.

A side-by-side of images captured with Curiosity rover’s MastCam showed just how extreme the storm had gotten, comparing the ‘Duluth’ drill site on May 21 and June 17. 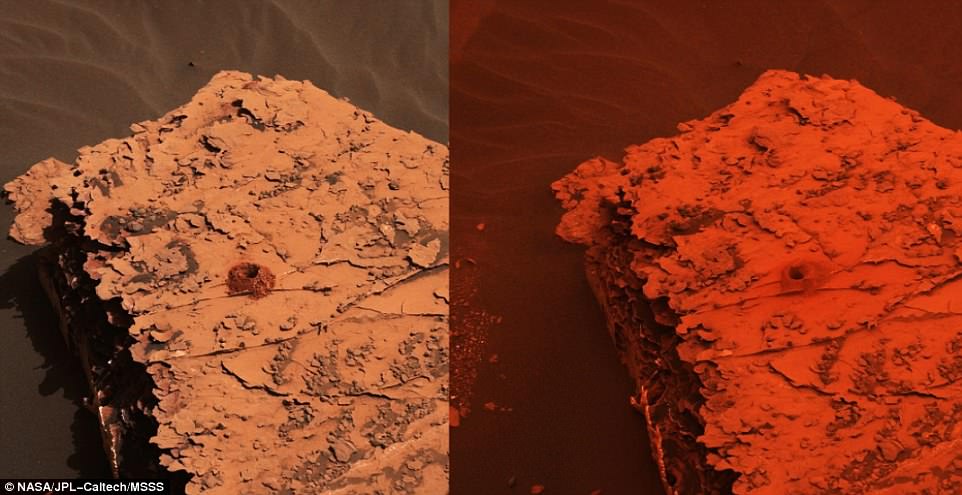 A striking image shared by the space agency in June showed the dramatic atmospheric changes caused by the ‘planet encircling’ event, with sites that were once clearly visible (left) shown to be obscured by red-tinted dust (right)

NASA’s veteran Mars rover had been hunkering down for weeks in the midst of the unprecedented dust storm.

The Opportunity rover fell silent on June 12, when engineers attempted to make contact with the 15-year-old rover but did not hear back.

In a press conference June 13, scientists involved in the Opportunity mission confirmed the rover has ‘fallen asleep’ as it waits out the storm that has blocked the sun – effectively cutting off its power supply.

The storm had been growing since the end of May, and by mid-June had already covered 14-million square miles (35-million square kilometers) of Mars’ surface, or a quarter of the planet.

Experts announced in June the storm had grown to be a planet-encircling dust event – though they didn’t know what was driving it.

The animation above shows how the recent dust storm battered the Opportunity rover in June. Scientists finally made contact with the rover for the first time in almost three months in early September

‘We don’t have any good idea,’ said Scott D. Guzewich, an atmospheric scientist at NASA Goddard Space Flight Center in Greenbelt, on why some storms grow so large while others fizzle out quickly.

With a layer of dust blotting out the sun over Perseverance Valley, Opportunity’s solar panels were unable to charge the rover’s battery.

‘We’re watching the weather and listening for signals.’

The first indications of a dust storm appeared back on May 30. The team was notified, and put together a 3-day plan to get the rover through the weekend. But, when the weekend passed, the storm was still going, with atmospheric opacity – or the amount of dust in the atmosphere (pictured above) – jumping dramatically with each day. As of June 20, it’s still going 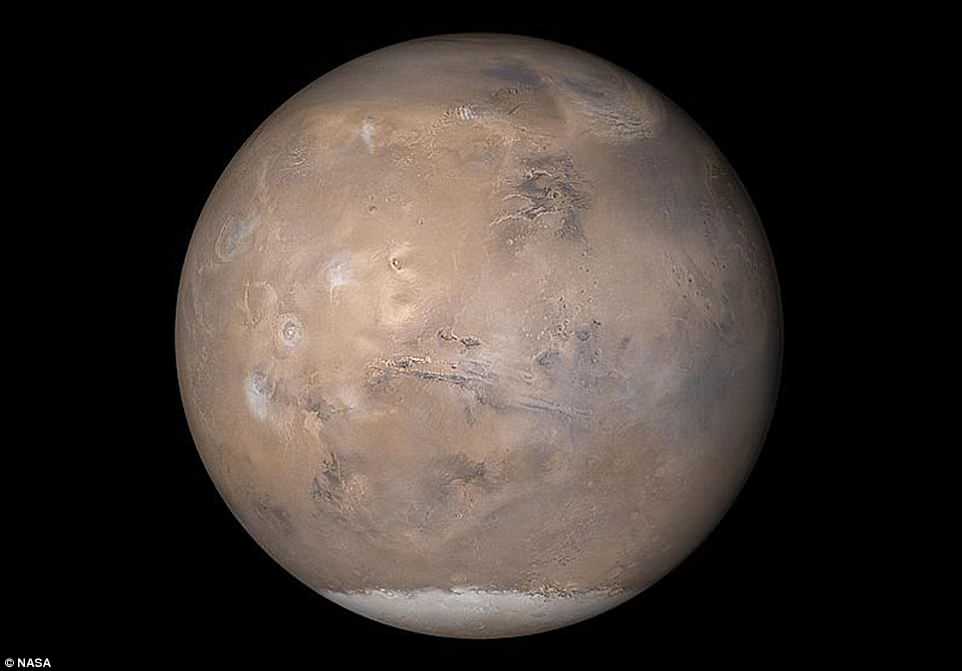 NASA’s veteran Mars rover has been hunkering down in the midst of an unprecedented dust storm that is now officially a ‘planet-encircling dust event.’ The storm has been growing since the end of May

According to Callas, the first indications of an emerging dust storm appeared back on May 30. The team was notified, and put together a 3-day plan to get the rover through the weekend.

But, when the weekend passed, the storm was still going, with atmospheric opacity – or the amount of dust in the atmosphere – jumping dramatically with each day.

‘The rover has gone to sleep,’ Callas said during the conference. ‘It’s in this low power mode, and will remain in that low power mode until there is sufficient energy to charge the batteries above the threshold.

‘At that point the rover will autonomously try to wake up and communicate with us. We’re in a waiting mode – we’re listening every day for possible signals.’

The team is also monitoring the rover’s temperature, as the prolonged darkness means it will be getting colder. So far, the experts say it should stay above the minimum temperature needed to continue its long-term operations.

‘We should be able to ride out this storm,’ Callas said. ‘When the skies clear and the rover begins to power up, it should begin to communicate with us.’