A Pakistani girl with a trunk-like nose that is bigger than the size of two tennis balls is desperately waiting for a life-saving surgery.

Asiya Manghrio, 15 months, from Sanghar in Sindh province, has been branded a ‘curse’ by cruel family members because of her rare condition.

She suffers from frontonasal encephalocele, according to local reports. It causes brain tissue to grow out through a defect in the skull.

Due to the weight of her nose, Asiya, dubbed a ‘defected baby’ by her in-laws, is unable to eat properly, struggles to sleep and cries incessantly.

Her heartbroken parents believe she will die without surgery – but busy doctors have had to delay her operation for two months.

Asiya Manghrio, 15 months, from Sanghar in Sindh province, has been branded a ‘curse’ by cruel family members because of her rare condition

Her parents had taken her to the country’s premier Jinnah Post Graduate Medical Centre in Karachi where several doctors examined her case.

Her mother Fatan Achar had to sell her only gold bangle to arrange money for travelling 160 miles in a local bus to reach the hospital and paying for doctor’s bills.

However, because of the vast number of cases already lined up, the doctors could not admit Asiya immediately.

Instead they asked Fatan, 23, and her farmer husband Achar, 27, to wait for at least two months for surgery.

But for Achar, who makes the equivalent of £100 a month, the wait is worrying him as he thinks he might lose his only child if the tumour is not removed on time.

He said: ‘We travelled over 160 miles from their hometown to Karachi in a bus and showed Asiya to several doctors who said only a surgery can treat our child.

‘They said there is no other way to remove the tumour from her face.

‘But they did not give us any immediate dates for the surgery and told us to wait for two months, claiming there are already too many cases in the hospital awaiting surgery. 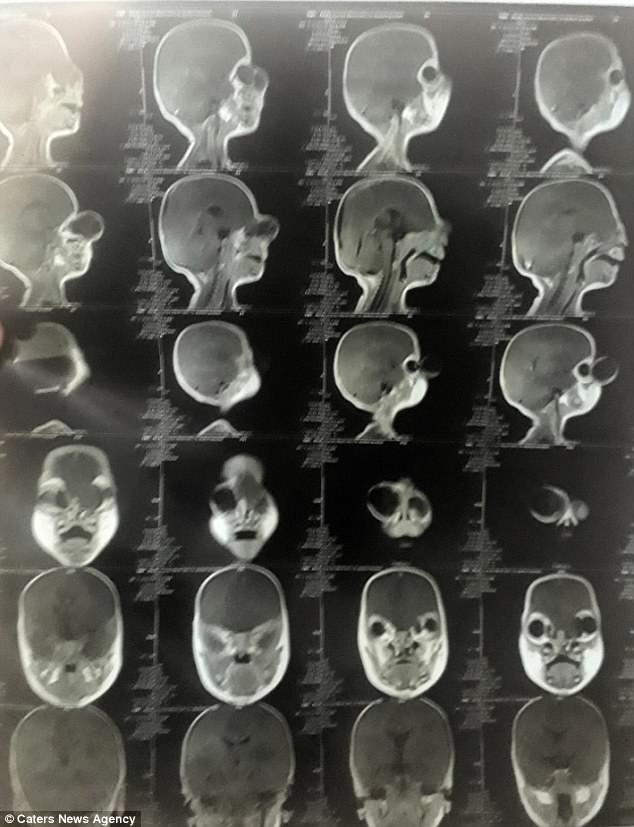 She suffers from frontonasal encephalocele, according to local reports. It causes brain tissue to grow out through a defect in the skull (pictured: a CT scan of her skull) 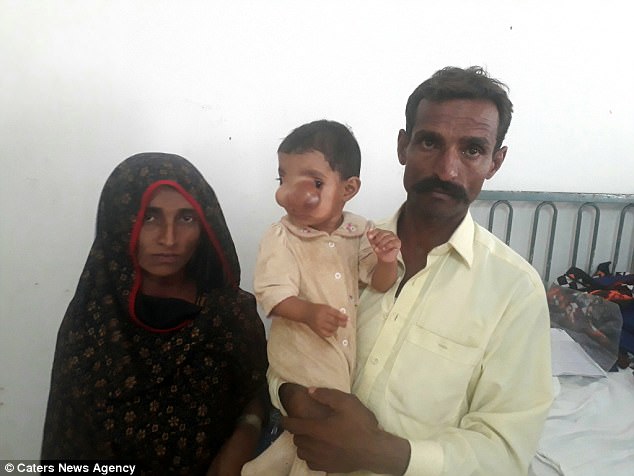 Her heartbroken parents, Fatan Achar, 23, and her farmer husband Achar, 27, believe she will die without surgery – but busy doctors have had to delay her operation for two months

Encephalocele is a rare type of neural tube defect (NTD) present at birth that affects the brain.

The neural tube is a narrow channel that folds and closes during the third and fouth weeks of pregnancy to form the brain and spinal cord.

Encephalocele is described as a sac-like protrusion or projection of the brain and the membranes that cover it through an opening in the skull.

Encephalocele happens when the neural tube does not close completely during pregnancy.

The result is an opening in the midline of the upper part of the skull, the area between the forehead and nose, or the back of the skull.

Usually encephaloceles are found right after birth, but sometimes a small encephalocele in the nose and forehead region can go undetected.

‘Due to the lack of crucial funds I cannot take my daughter to any private hospital either.

‘We are desperately waiting for her surgery. It is painful to see our daughter in such a condition.’

Besides the physical pain, the parents have to also go through emotional turmoil every day because of their ‘defected baby’.

Fatan said her in-laws have branded Asiya a ‘curse’ and treat both of them badly.

She said: ‘Asiya was born through a caesarean delivery and had a swollen nose.

‘Within a few months, her nose started growing at an abnormal rate and now its size is bigger than a tennis ball.

‘Due to the large weight and size of the nose she cannot eat properly or sleep well and cries incessantly.

‘My in-laws have branded me a curse. They show a very strange behaviour towards me. They even taunt and curse me for giving birth to a defected baby.

‘I had to sell my only gold bangle I had to afford travel expenses to Karachi from Sanghar. 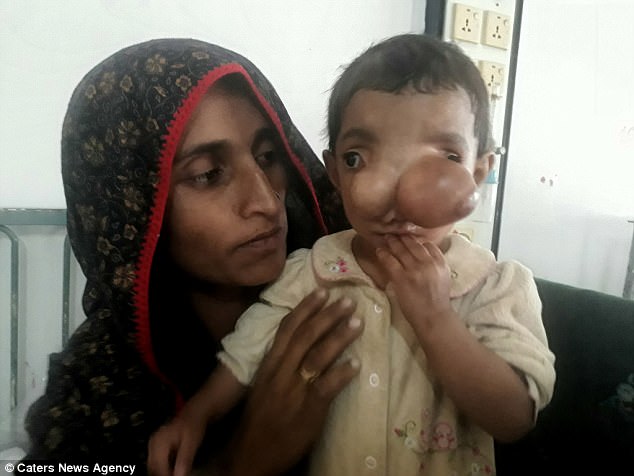 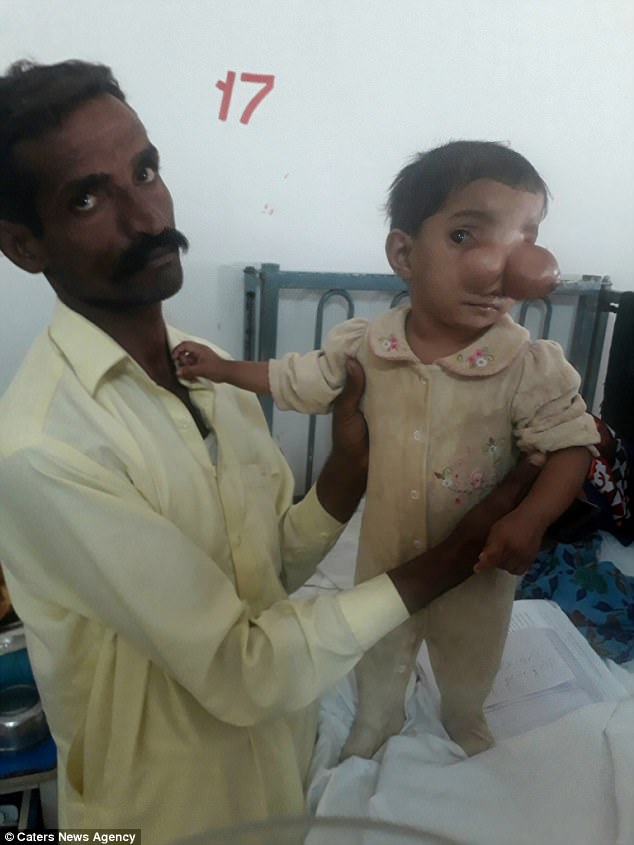 Achar, who makes the equivalent of £100 a month, is worried about the wait as he thinks he might lose his only child if the tumour is not removed on time

‘It is very heartbreaking that we have to go back to Sanghar and return after few months for Asiya’s surgery. We will not be able to bear the travel expenses again and will have to lend money from relatives.’

‘Currently the condition is not causing her any trouble in breathing but the tumour can cause serious problems and grow even bigger if left untreated.

‘Surgical correction is the only treatment for this condition.’

Both Fatan and Achar are hoping to get help from government for an immediate life-saving surgery to remove the tumour from their daughter’s face.

Fatan said: ‘We cannot afford going to a private hospital but cannot see her in pain.

‘All we want our daughter is to live a healthy life just like other children and have a bright future. And surgery is the only way possible.’