Australians finally let out to visit shops and malls this weekend have been met with the stark reality of the new normal, with huge queues and temperature checks.

Shoppers at some stores were given health screenings by staff before they were allowed to enter, with all abiding by strict capacity limits.

As has been the case since March 20 in Australia, there must be four square metres per person allowed in any venue, meaning 25 shoppers are allowed in an 100sqm store.

In a bid to stick to the rules thousands of Australians joined long queues on Saturday so they could visit Kmart, Bunnings or Aldi.

Customers eager to get into Mecca Cosmetics on Queensland’s Gold Coast were temperature checked at the door, while shoppers at a nearby Peter Alexander queued patiently to get in. 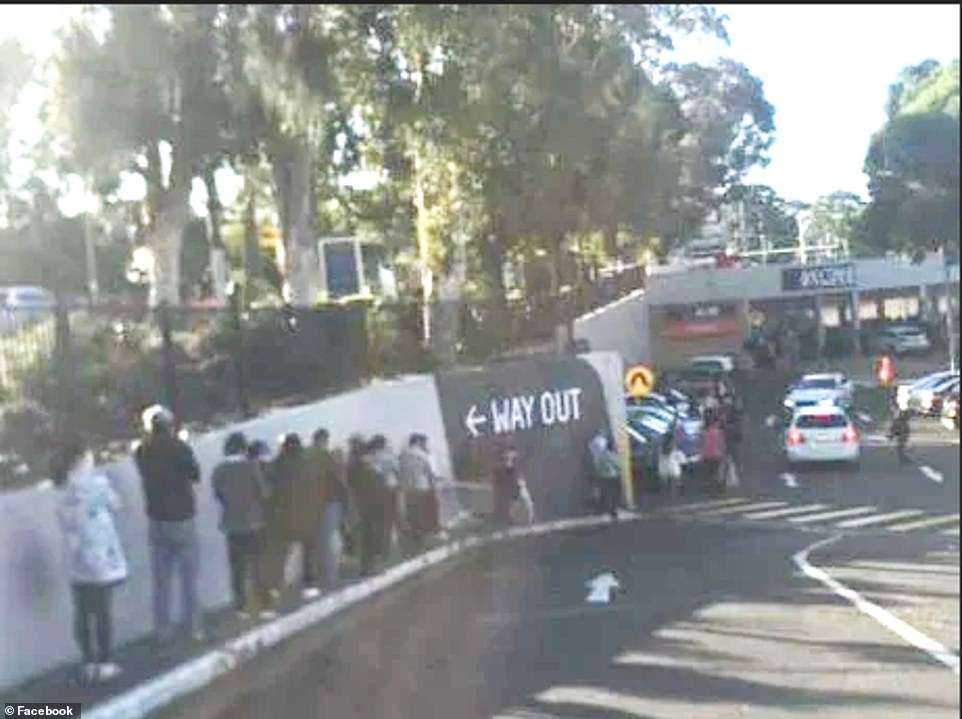 Dozens of people are seen queuing to get into Aldi on Saturday morning (pictured) at North Rocks, NSW, hoping to get their hands on a coveted $99.99 air fryer

Outside Kmart the Pacific Fair shopping centre in Broadbeach Waters on the Gold Coast, barriers and ropes were installed to help shoppers queue outside safely.

Shoppers were forced to diligently wait for their turn to go into store, which due to social distancing rules could be a normal way of life from now on.

Even after unveiling his three-step plan to reopen Australia on Friday, Prime Minister Scott Morrison reiterated that social distancing will still be in place – regardless of restrictions being eased.

In NSW, huge queues of shoppers were seen at a Westfield in Miranda waiting to buy flowers for Mother’s Day, despite premier Gladys Berejiklian warning people to be careful when visiting older family members.

In the Northern Territory, which is leading the way in the fight against coronavirus and the easing of restrictions, Darwin’s popular Parap Markets was opened for the first time in weeks. 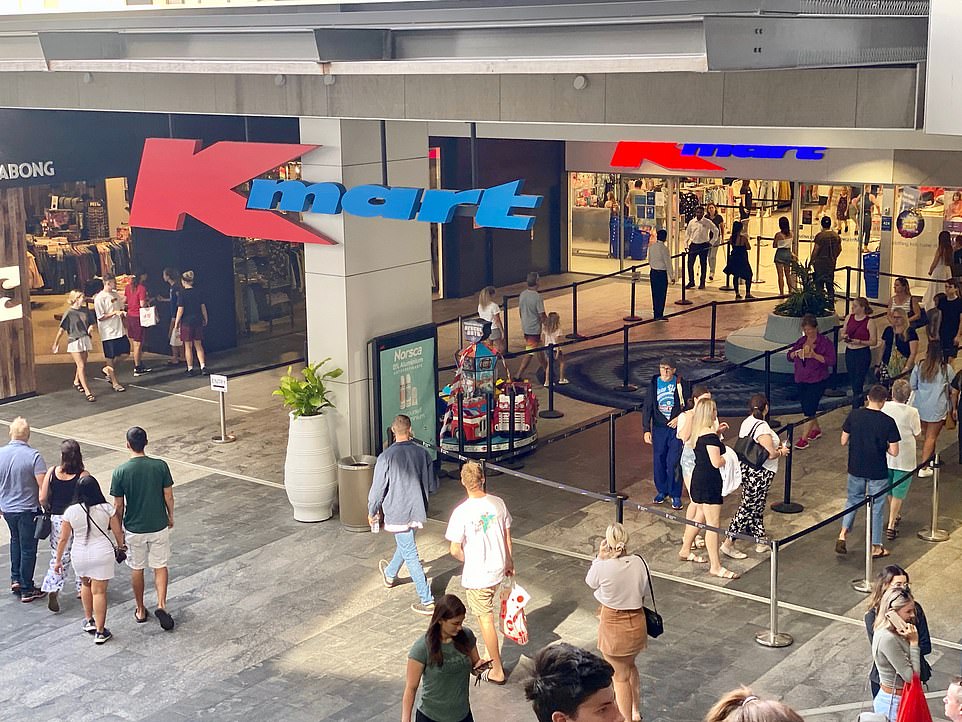 Shoppers are seen queuing outside Kmart at at Pacific Fair shopping centre on Saturday (pictured) as the store imposed its capacity limit, which is based on the size of the individual shop 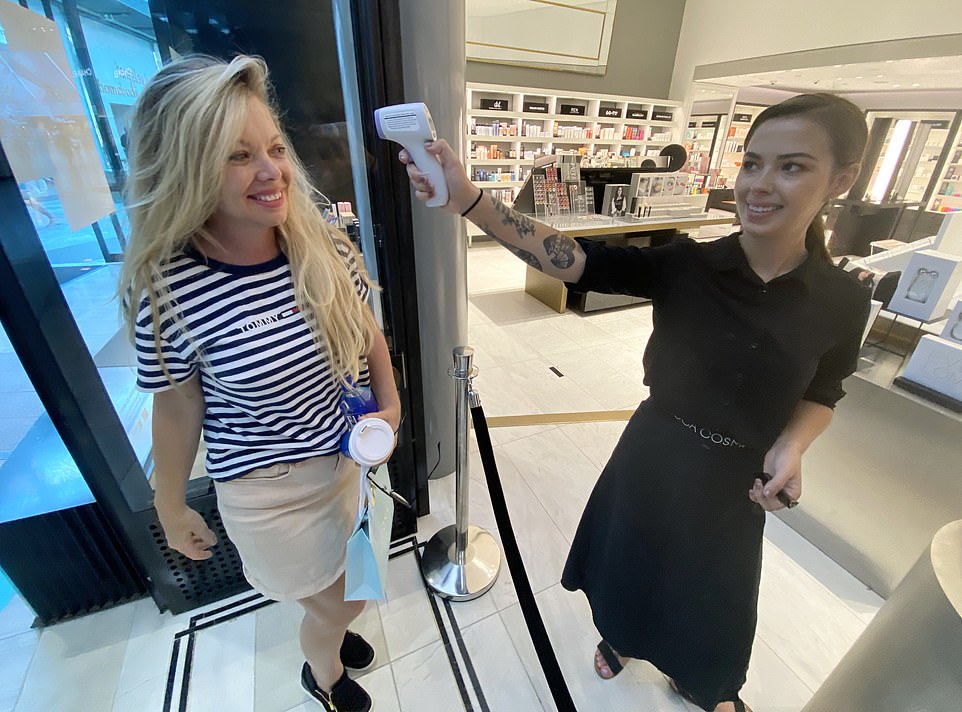 The territory’s chief minister Michael Gunner made a trip to queue up for a bowl of his favourite noodles, the ‘Michael Special Noodle’.

Mr Gunner filmed the crowds who flocked to the market, all queuing carefully outside while social distancing.

‘Waiting in line for the “Michael Special” – was def worth the wait,’ he wrote on Instagram, sharing a picture of himself in the queue with his sleeping newborn.

Pubs in NT will open on Friday, after the area recorded only 30 cases of coronavirus, 28 of which have fully recovered.

The state is already in its own version of the federal government’s Step 1.

From Friday May 15, residents will be allowed to go to pubs, restaurants and cafes, with sport already allowed.

Businesses must submit coronavirus safety plans to be allowed to reopen.

From June 5, all businesses with COVID-Safe plans will reopen, including bars, nightclubs, casinos, tattoo parlours and cinemas. 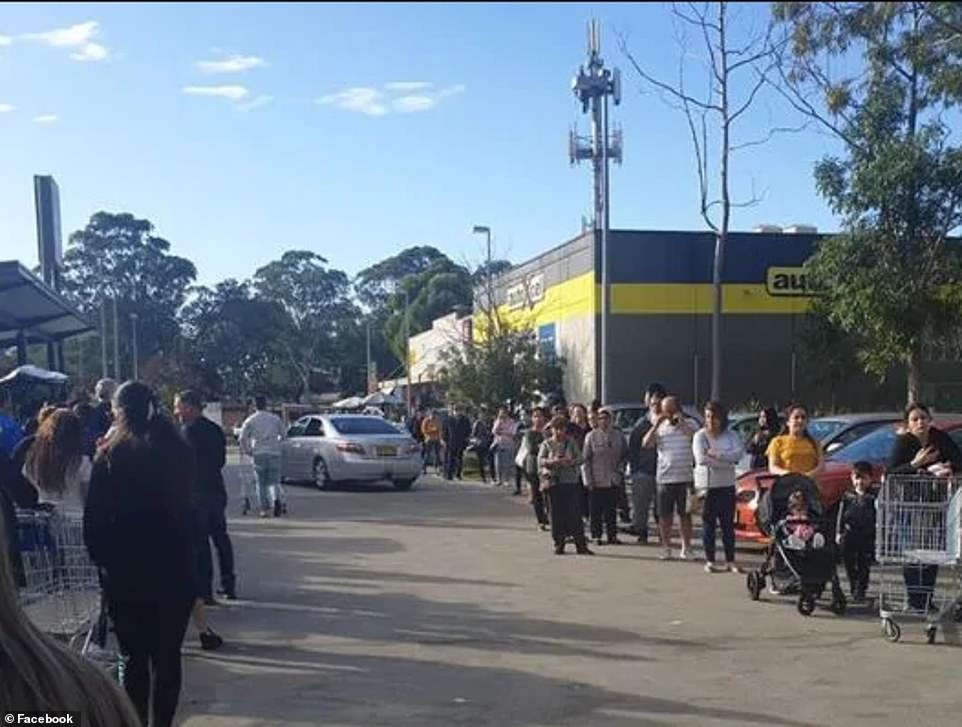 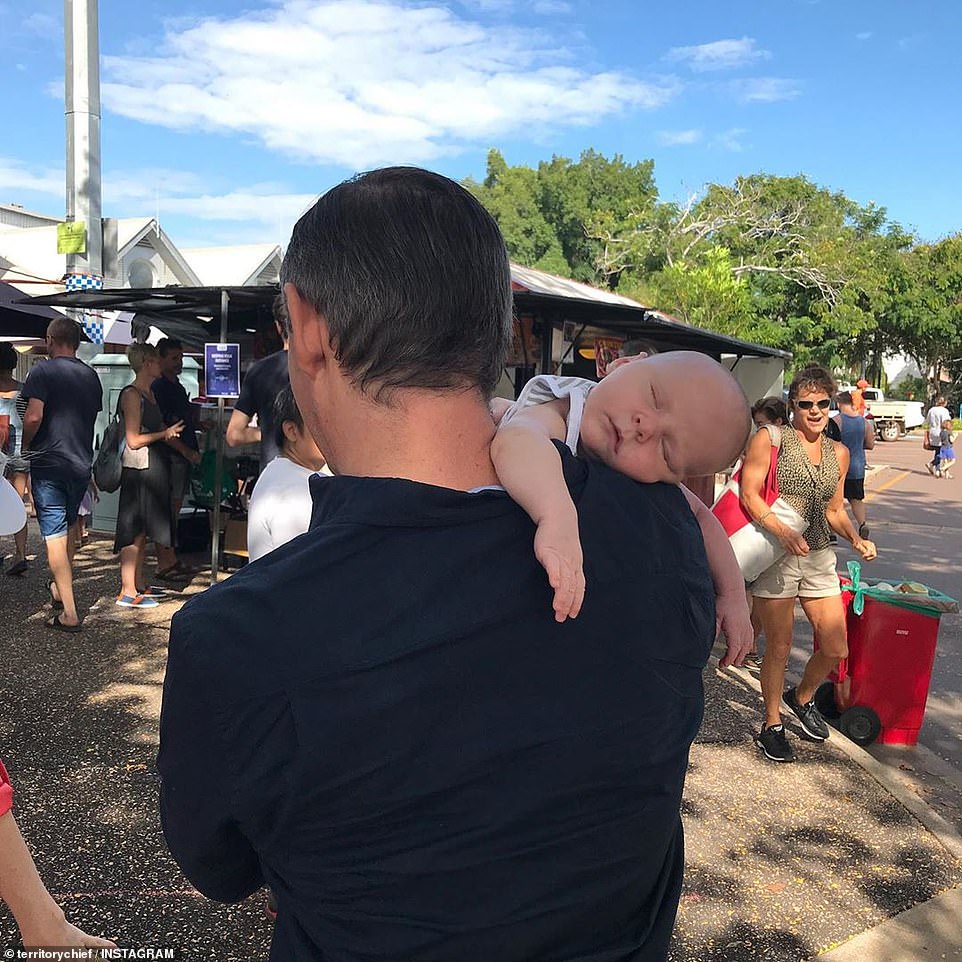 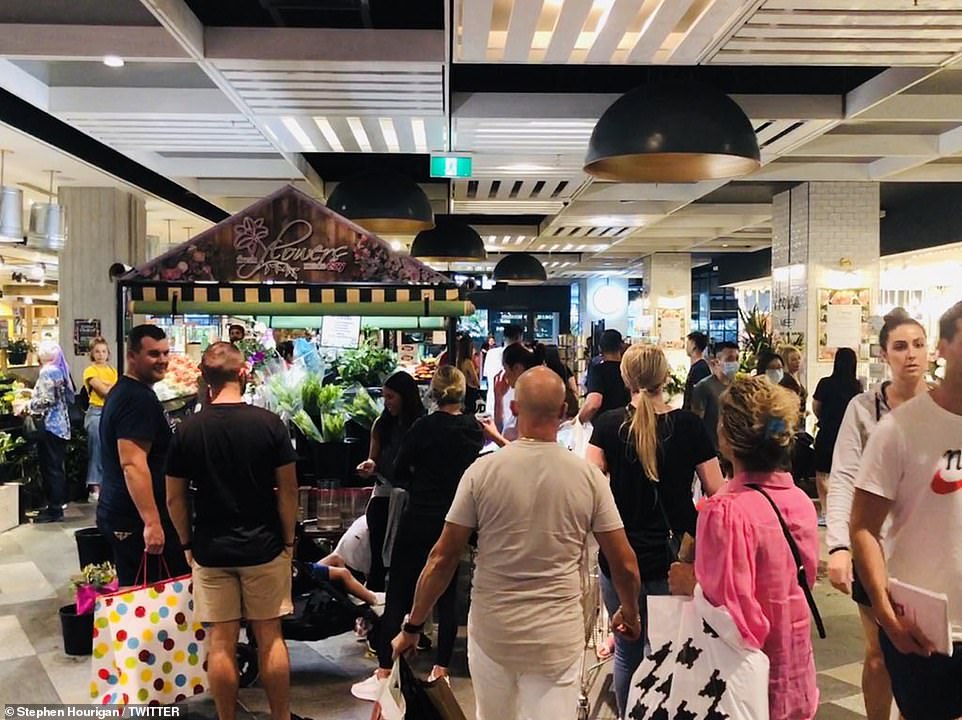 At Westfield in Miranda, NSW, shoppers were seen flocking to buy flowers for Mother’s Day (pictured) despite no new restrictions being eased in the state

Recreational shopping, as opposed to only for essentials, is now allowed in some parts of Australia, including Queensland, but in NSW only shopping for ‘essential food, goods and services’ is allowed.

But the definition of goods and services has been fairly broad, with the likes of JD Sports and David Jones open on Sydney’s main shopping district, Pitt Street.

Shoppers across the country also flocked to Aldi on Saturday to snap up some of the supermarket’s Mother’s Day-themed Special Buys.

It included many families desperate to get their hands on a $99.99 air fryer.

One woman, who waited to buy the air fryer from the North Rocks Aldi store in NSW, wrote: ‘I thought I’d see if I could get the 8 litre air fryer. The queue at ALDI this morning. Up and around the corner. Crazy.’ 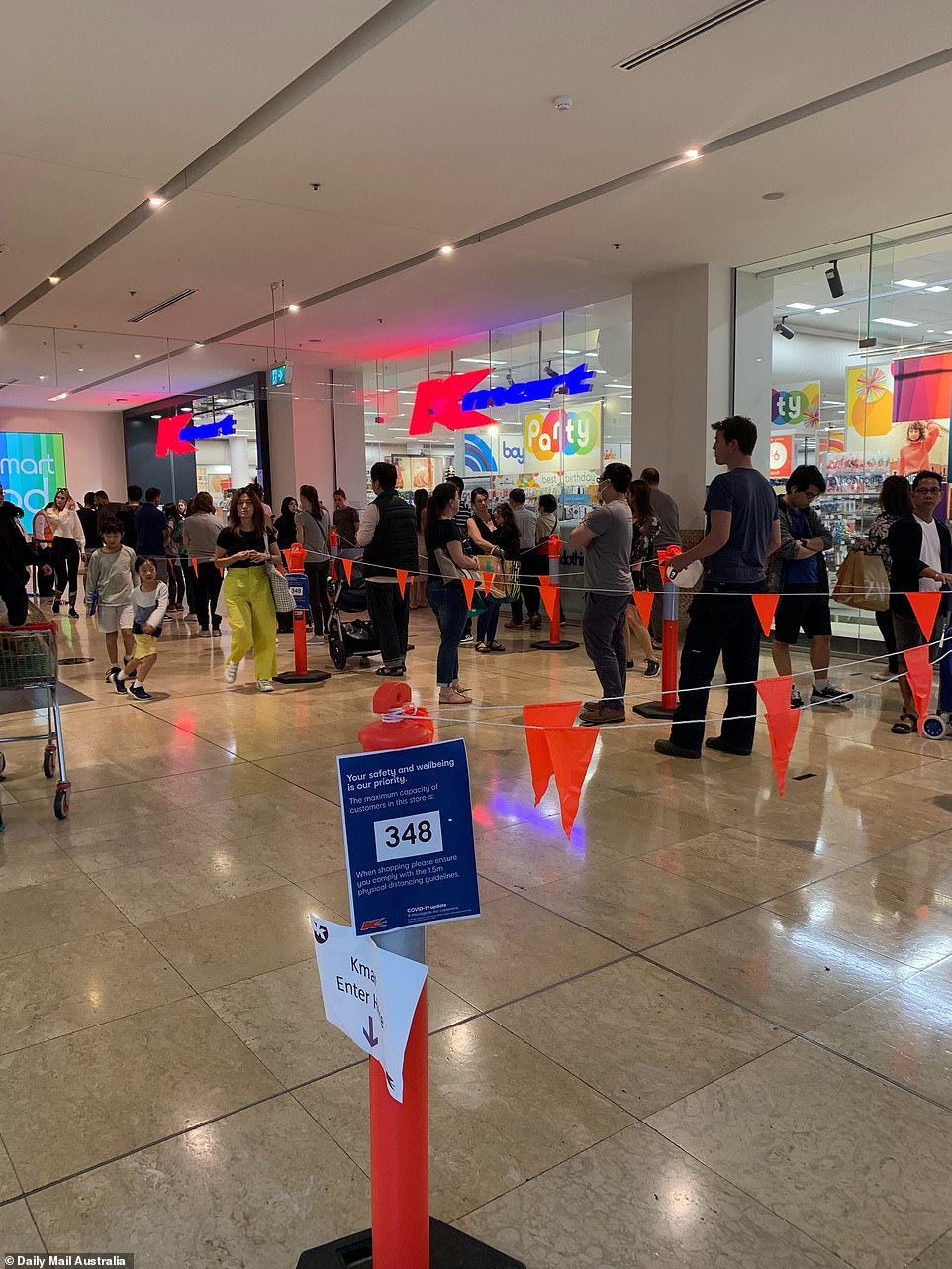 Customers are seen queuing outside a Kmart in Chatswood on Saturday morning (pictured), with a maximum of 348 people allowed in store at any one time 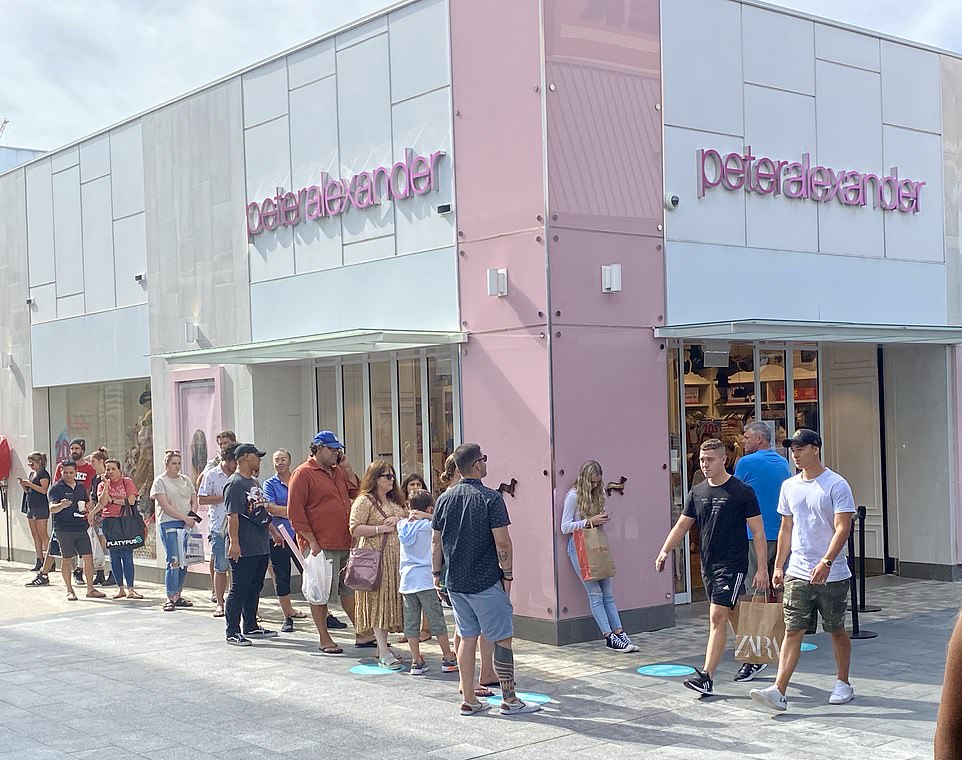 In some pictures taken outside store across the country, particularly outside Aldi’s supermarkets, people did not appear to be social distancing.

‘Great to see that COVID-19 will spike because of a damn air fryer? Really??’ one person wrote, while another added: ‘Where’s the social distancing?? Idiot sheep.’

In Victoria, where no restrictions have been eased, crowds flocked to shopping centres at Chadstone, Northland, Southland and Highpoint – with many ignoring social distancing measures designed to keep people safe.

One worker told the Herald Sun people were not shopping for essentials, but ‘just wandering around aimlessly and window shopping . . . finding something to do in the bad weather’.

Announcing his plans on Friday, Mr Morrison said the steps had been carefully discussed, and would help Australians slowly return to normal life.

‘It will see children back in classrooms and in playgrounds in their communities,’ he said.

‘Golfers back on the green. Lap swimmers back in the pool.

‘Boot camps back in the parks. Retail and small cafes and restaurants reopening.’ 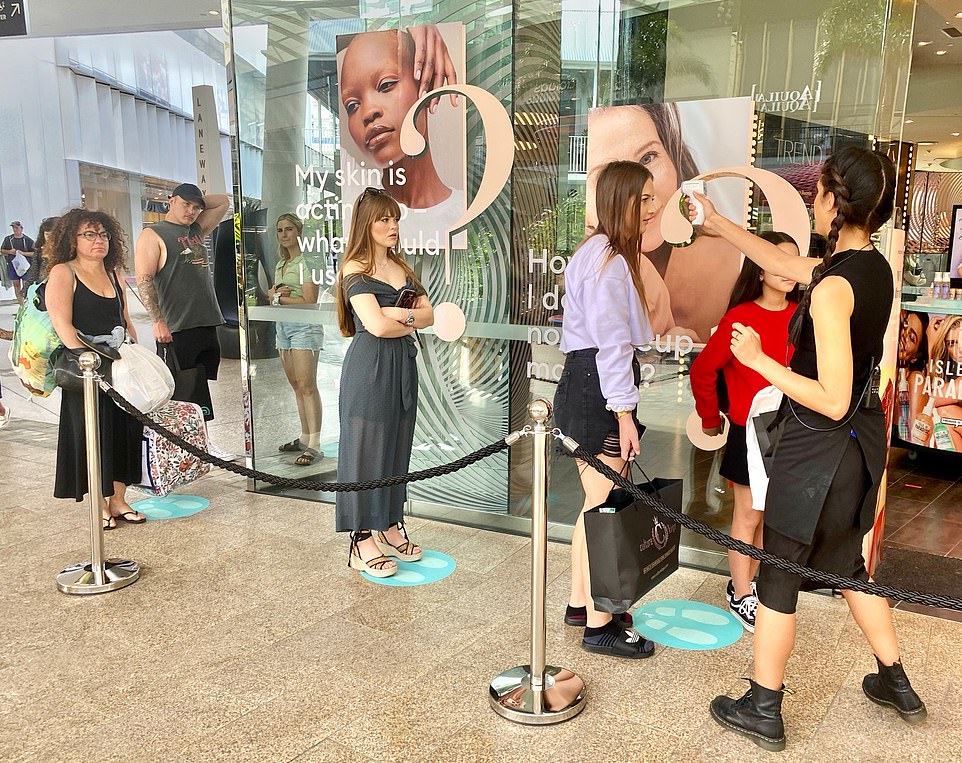 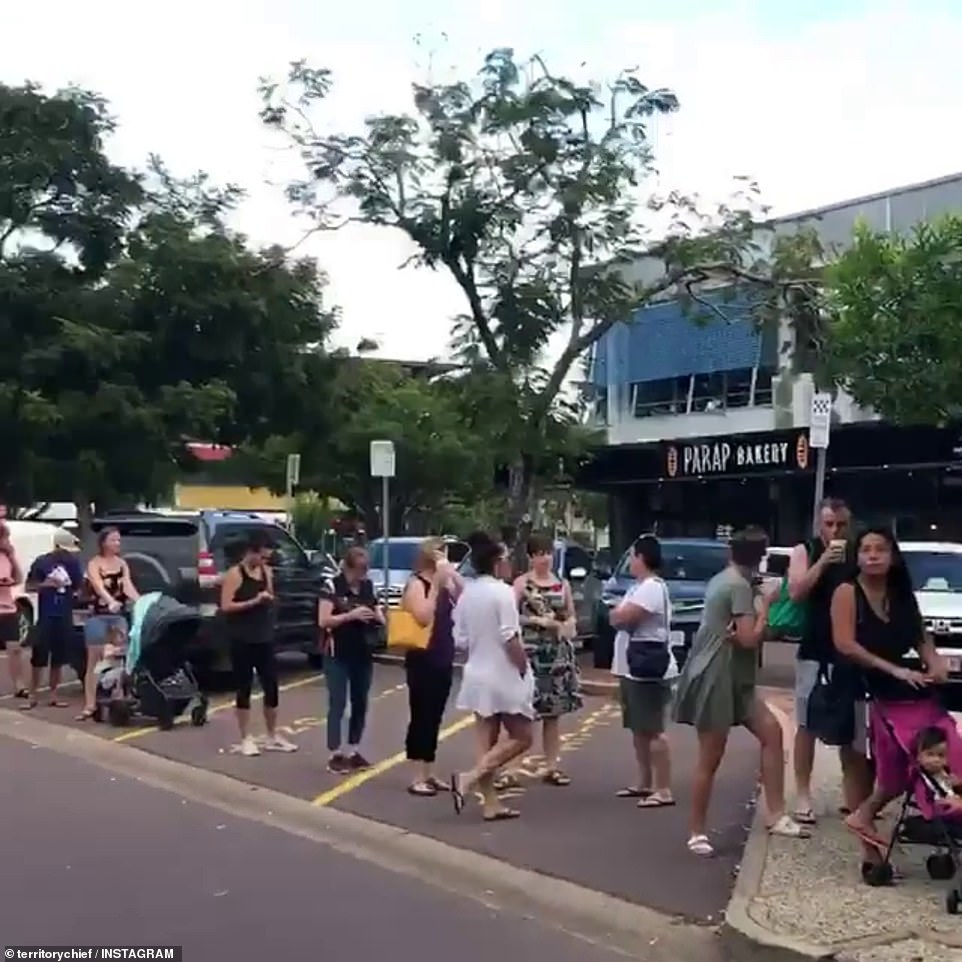 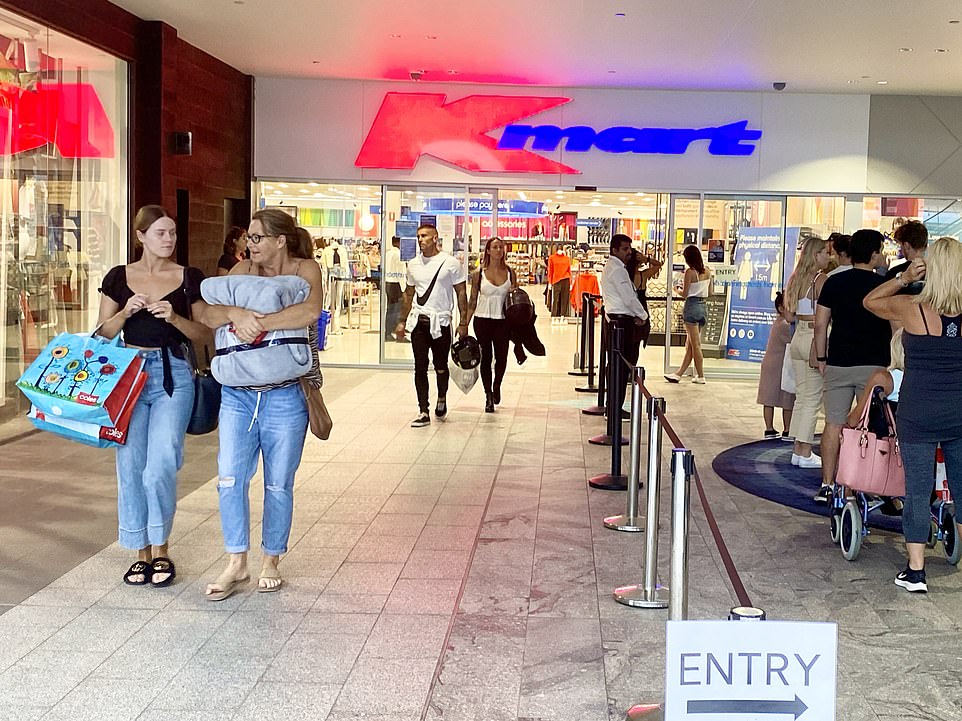 Queensland was quick to put a timetable on its own restriction easing, and said it would enter Step 1 on Saturday May 16.

In South Australia, Step 1 will be brought in this Sunday night, meaning restaurants, cafes and shopping can re-open, as long as health measures are followed.

But in NSW, which has recorded 3,047 confirmed cases – the highest in Australia – the picture going forward is very different.

‘The path forward for NSW is positive but we need to make sure testing rates stay high and all of us must follow social distancing,’ she told the Sydney Morning Herald.

‘We should be proud of what has been achieved in NSW so far and there is no doubt people will feel a much greater sense of normality over the next few months.’

Admitting that it is a ‘conservative approach’, scientists have suggested that leaving any easing of restrictions until at least June would give officials more time to assess the situation. 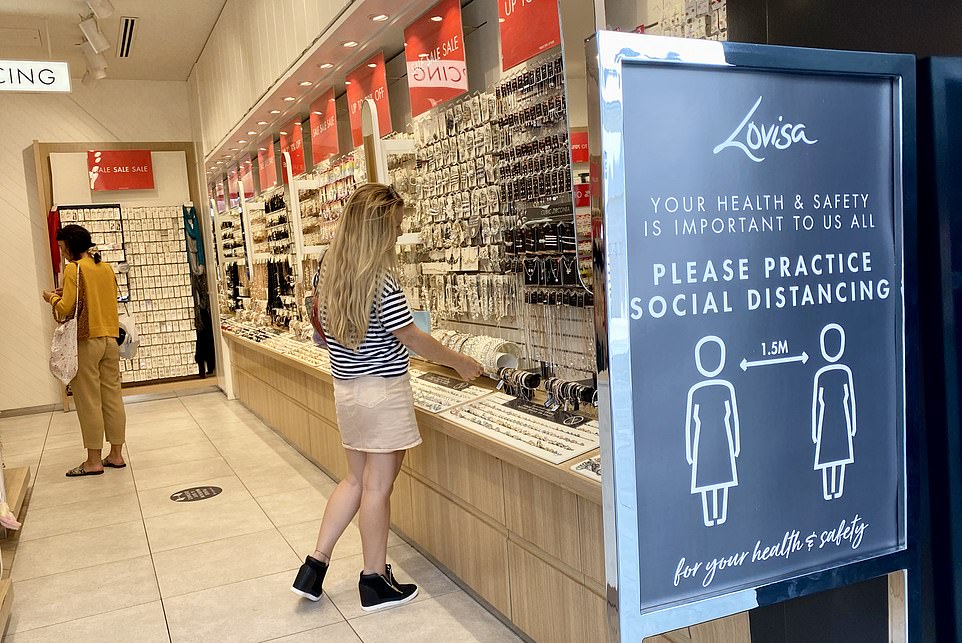 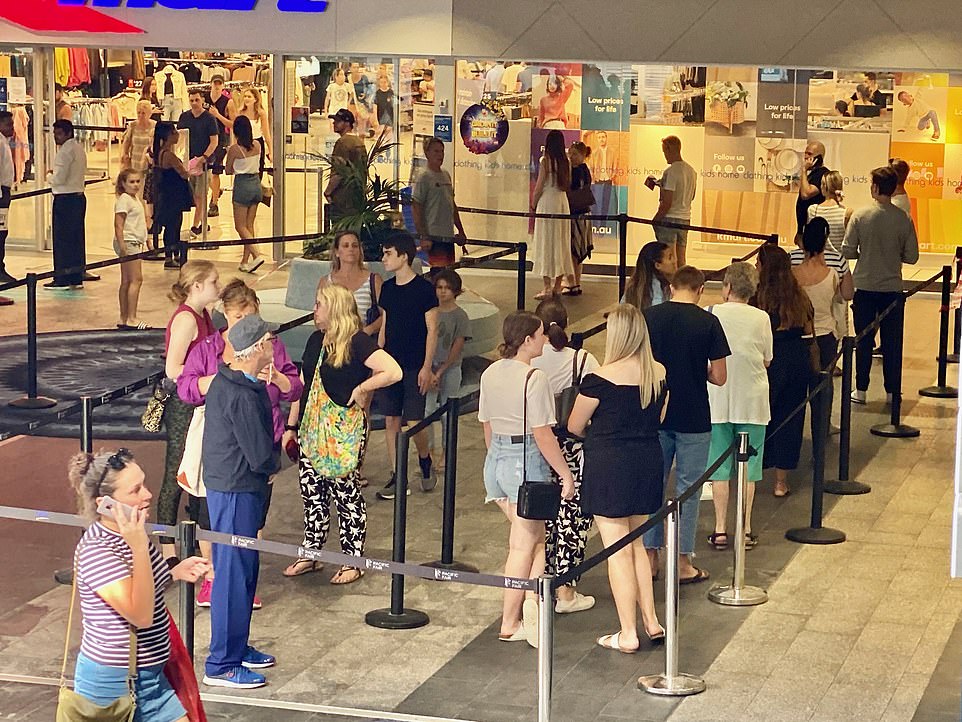 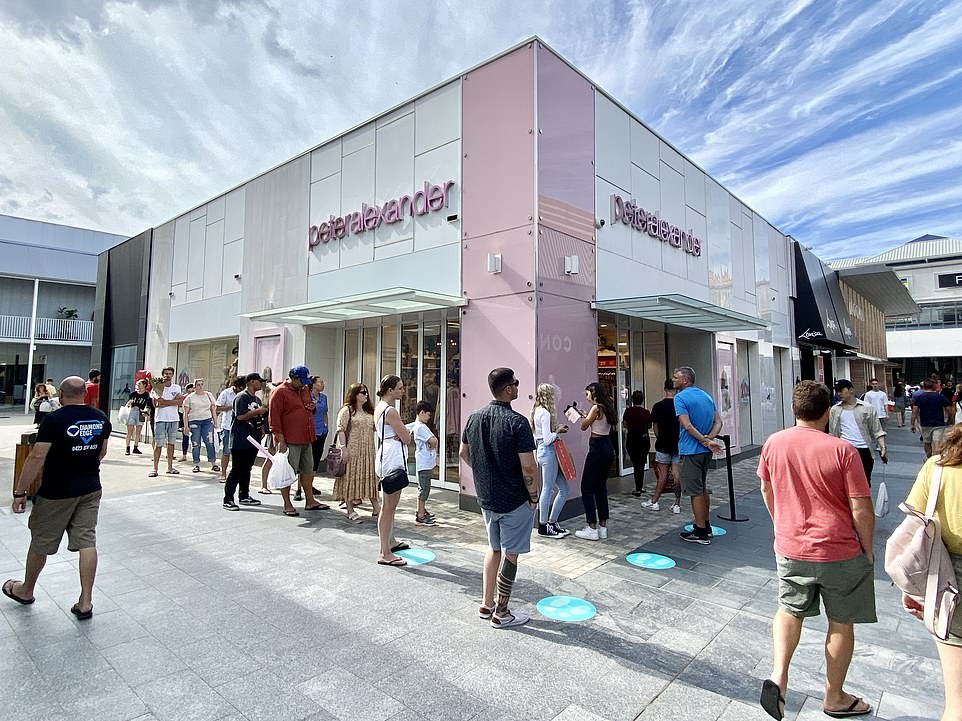 Serious problems would arise at major sporting events, concerts and festivals, as contact tracing would be nearly impossible.

If one person in a very large crowd contracts the virus, it would become impossible to contain any outbreak.

But small gatherings at family homes would be much easier to keep safe, as all attendees would be known to each other and easy to contact.

‘NSW will be considering the data we collected in May, to make sure that any further consideration of easing restrictions will be done in a solid way so that we continue to gain ground,’ Ms Berejiklian said on Friday.

Western Australia is at the other end of the scale, with low infection rates and hard border closures giving the state a better starting point to take the next steps.

Premier Mark McGowan said he would move quicker than the eastern states.

‘Clearly Western Australia has the opportunity to be more economically progressive than other states,’ he said in Perth.

Mr Morrison said moving through the stages would be guided by medical advice.

The prime minister also reiterated his push for an inquiry into the response to the coronavirus, which has strained relations with China. 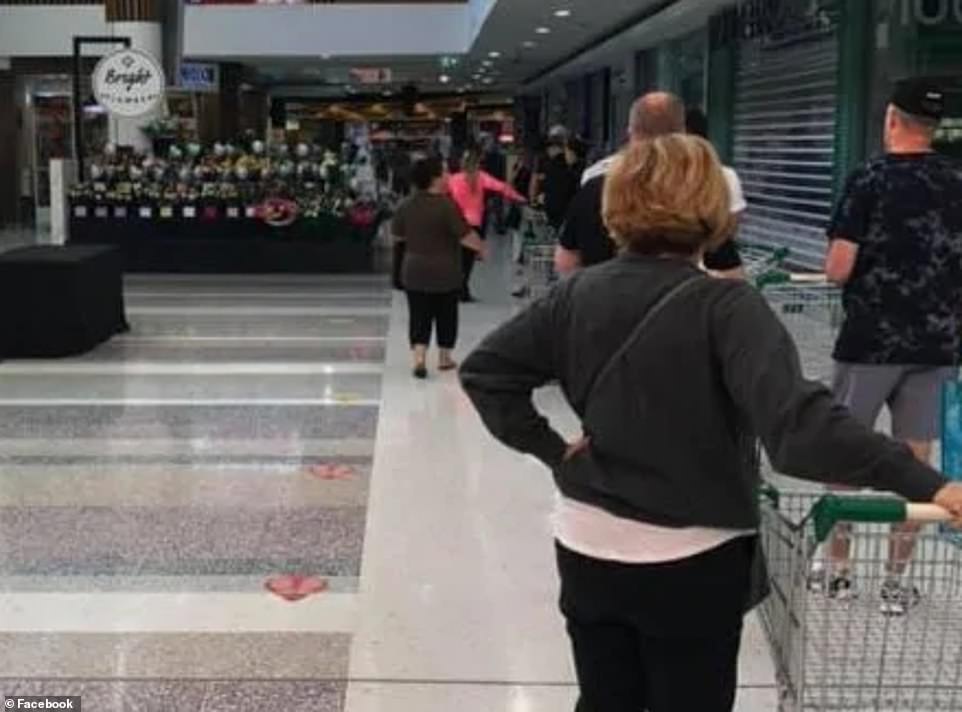 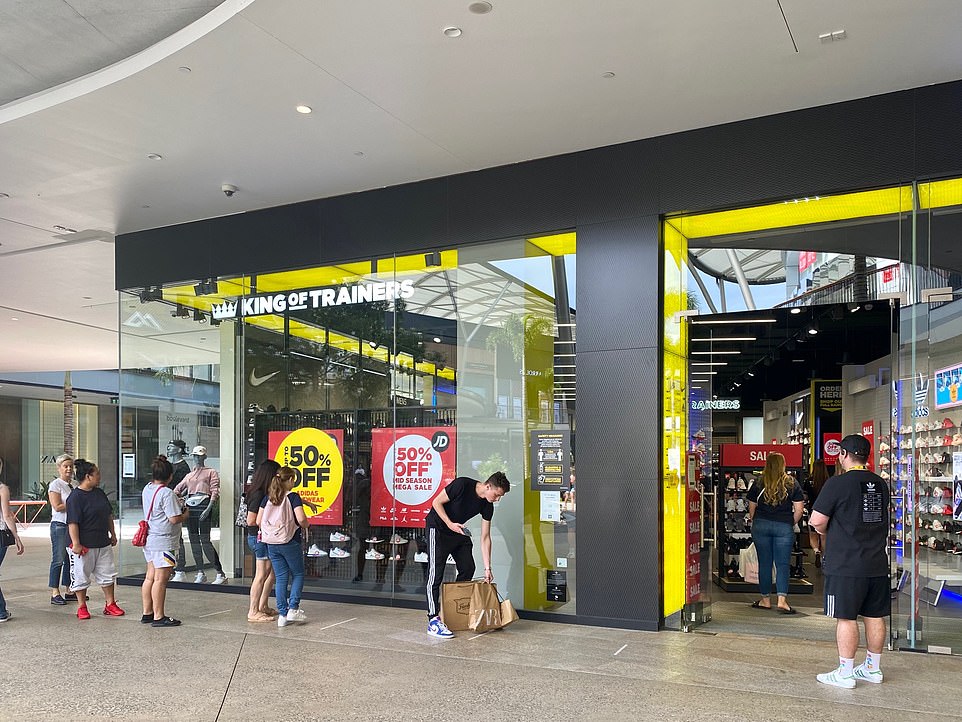 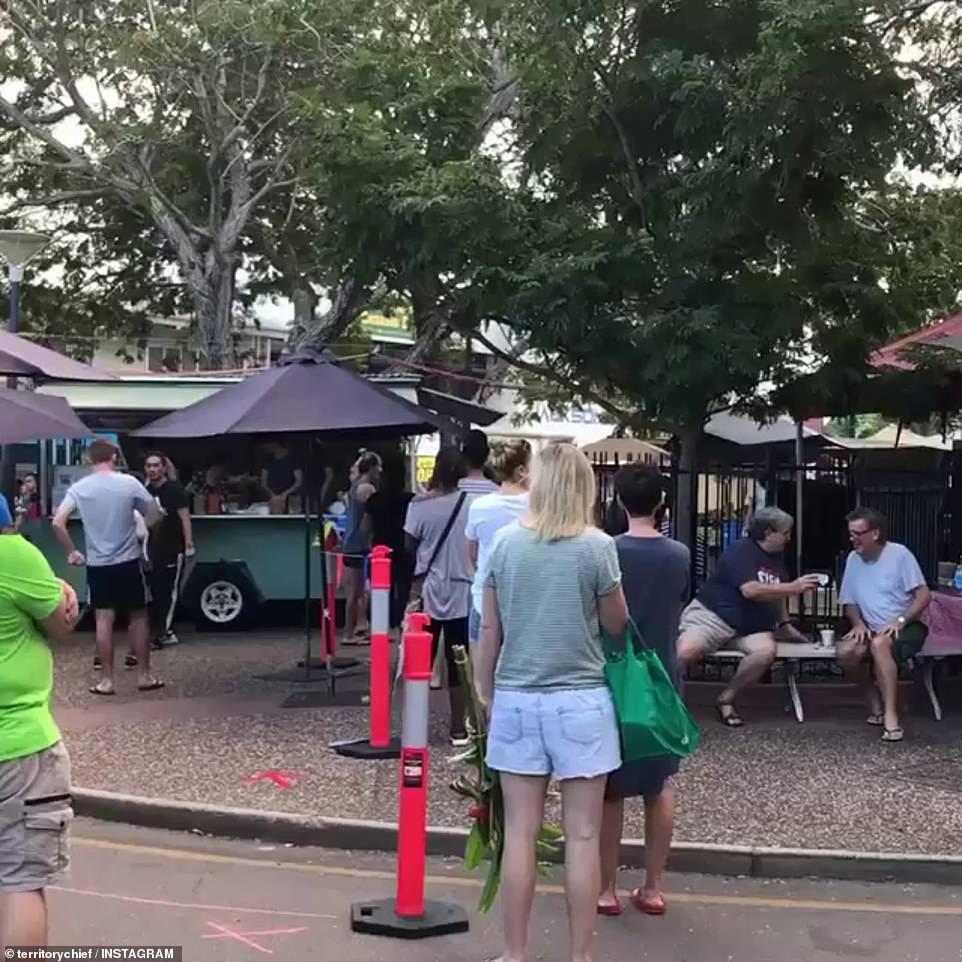 Victoria has been the most cautious state throughout the coronavirus crisis, and is currently dealing with an outbreak at a meat factory, Cedar Meats, which is linked to 76 cases.

Victorians will have to wait until Monday to hear about when restrictions will start to be eased, which is when Victoria’s state of emergency ends.

‘This is a pandemic, this is not a popularity contest,’ Mr Andrews told reporters on Friday.

‘And I just reiterate – these are the rules, and the strong compliance we’ve seen from Victorians, for which I’m very grateful, that’s what’s delivered these numbers.

‘Let’s not give everything back, let’s not throw away all the progress we’ve made by letting our frustration get the better of us.’

Mr Andrews said he understood the frustration over the measures, but it was important to lift restrictions safely and slowly.’ 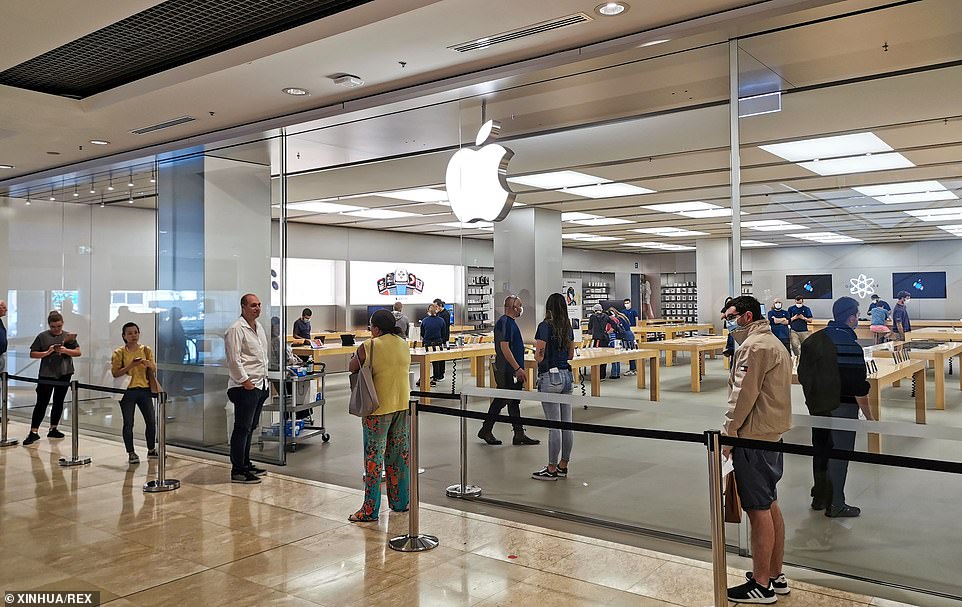 * Small restaurants, cafes and shopping open with max of 10 customers