Cutting calories may keep you younger and lower disease risks

Restricting calories may reduce the risk of an early death by protecting the body from damaging byproducts of converting food to energy, a new study suggests.

Researchers have observed in animals that fewer calories keeps core body temperature lower and slows metabolisms, insulating the body from the collateral damage from metabolic processes.

The by-products of metabolism cause oxidation, which has been linked to increased risks for diseases like cancer, diabetes and rheumatoid arthritis.

In one of the first such studies in humans, scientists at Pennington Biomedical Research found that cutting calories by 15 percent led to weight loss, less oxidative stress and slower metabolisms.

Cutting calories may help reduce oxidative stress that may cause aging and age related diseases, according to new research

So, beginning in our 30s, we start to lose a little muscle mass, losing weight becomes more difficult, and our appetites drop.

These effects may not sounds very glamorous, but a slower metabolism is actually widely thought to help delay the negative effects of aging.

A high metabolism rate is also a high-stress state: every body system has to work harder to fuel the conversion of food to energy.

When calories are ‘burned,’ they are converted to energy through a process that splits an oxygen atom.

The by-product is an imbalanced form of oxygen that has just one electron, called a free radical. Atoms want to be stable, so the free-radical will seek out a spare electron from other atoms in the body, acting like a tiny attacker on other cells and DNA.

This causes what is known as oxidative stress, and the faster or more frequently these metabolic reactions happen, the more free radicals are produced and the more severe this stress becomes.

Our bodies also produce enzymes that hunt down and neutralize free radicals, but as we age this production chain slows down.

So, according to some theories of aging, if our metabolisms stay has high as they once were, the generation of free radicals outpaces our natural antioxidant abilities.

This is why diets that include many antioxidant-rich foods- like fatty fish, nuts and vegetables – can improve our defences against aging and age-related disease.

What’s more, as the new study suggests, by cutting overall calorie intake, we may slow down metabolism and, in turn, oxidative damage. 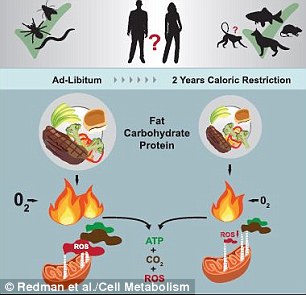 Studies have shown that calorie restriction can lengthen the lives of animals by reducing the oxidative stress of converting to food to energy. New research suggests the same is true for humans

‘We know from mammalian studies that the smaller the mammal, the faster their metabolism and the shorter their longevity,’ said lead study author Dr Leanne Redman, a clinical sciences professor at Pennington Biomedical Research in Louisiana.

But, before she and her team began their research, the theory had not been tested very extensively in humans.

So, the researchers recruited 53 people between 21 and 50 who were not obese and had them reduce their calorie intake by 15 percent over two years.

The participants that trimmed their diets lost an average of nearly 20 lbs and – more importantly, for the study’s aim – showed fewer signs of oxidative stress and signs of slowed metabolisms.

The trial ‘rejuvenates support for two of the longest-standing theories of human aging: the slow metabolism ‘rate of living’ theory and the oxidative damage theory,’ said Dr Redman.

‘Restricting calories can slow your basal metabolism, and if by-products of metabolism accelerate aging processes, calorie restriction sustained over several years may help to decrease risk for chronic disease and prolong life,’ even for people who are already healthy, Dr Redman explained.

It is not yet clear how many years of lifespan one might get added back by subtracting calories, but if her extrapolations from animal data are accurate, Dr Redman says that cutting calories by 25 percent may extend life expectancy by as much as seven years.

The trick to this is to keep the lower calorie diet up even after you drop the weight.

It may be a tall order, but ‘eating a well-balanced diet with fewer calories does have benefits for the secondary causes of aging,’ she says.

‘These are the lifestyle-related diseases such as heart disease, diabetes, stroke etc. We saw that biomarkers such as blood sugar, insulin, lipid levels were also improved with calorie restriction in this group of already healthy people,’ said Dr Redman.