Every day, more than 80,000 cars and lorries pass along the busy Marylebone Road, a major arterial trunk road that has run into and out of the Home Counties since the 18th century.

It travels past major landmarks including The Regent’s Park and Madame Tussauds before becoming Euston Road and ending at King’s Cross in the east.

But the word ‘busy’ has in the last few months turned out to be a misnomer. Today, the road may still be busy, but it is ‘busy’ going nowhere.

Gridlocked vehicles now have to sit for up to an hour (pictured), pumping out pollution all the while, after an astoundingly ill-thought-out-scheme implemented by London’s mayor

For thanks to an astoundingly ill-thought-out scheme implemented by London’s mayor and paid for by the taxpayer, gridlocked vehicles now have to sit for up to an hour, pumping out pollution all the while.

As the Mail revealed, in July, at a cost of £250,000, Transport for London (TfL) imposed new cycle lanes on the road, reducing it to a single lane each way for cars.

The move was part of a £250million Government initiative to encourage people to travel on bicycles and minimise the use of public transport when the Covid-19 threat was at its most dangerous.

They called it the Emergency Active Travel scheme, and it was rushed through at breakneck speed, often without consultation with local residents.

Last month, the Mail revealed that many local authorities have used the money unwisely and recklessly to increase the number of cycle lanes and impose ‘LTNs — Low Traffic Neighbourhoods — on residential areas, even if they are not required.

As a result, in many parts of Britain, traffic fumes and tailbacks on major roads have actually increased — lengthening journey times and causing environmental havoc. 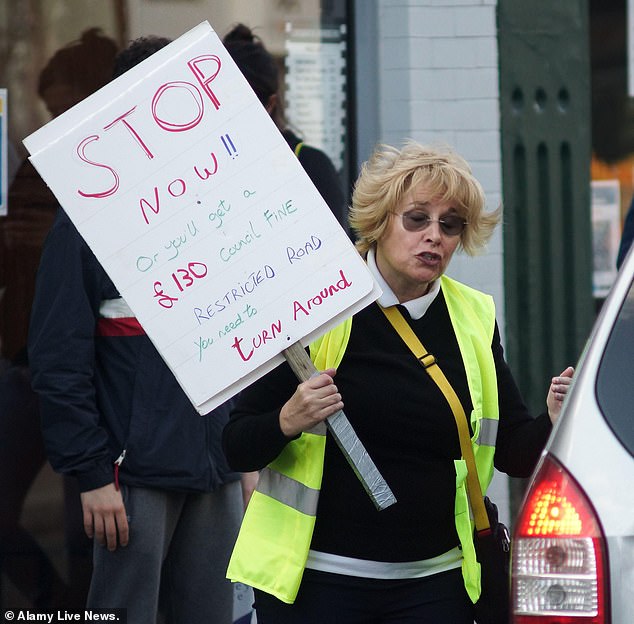 Council contractors have become alarmed by the groundswell of opposition to their schemes, which in most areas crosses party lines (a protestor, pictured)

But now we can reveal that, at least in some places, sanity seems to have prevailed.

In particular, Sadiq Khan, London’s mayor, has been forced to backtrack — humiliatingly — on the Marylebone scheme.

Next month, the bollards that line the road will be ripped out — much to the delight of drivers who use the road every day.

It is a highly embarrassing volte-face for City Hall and Transport for London, which has admitted that the cost of returning the road to its former state is unknown.

Elsewhere in Britain, too, autumn seems to be the season for U-turns.

Many councils are now facing an ‘Active Travel Emergency’ — trying to work out how quickly they can get rid of their schemes and appease furious residents.

All over the country, expensive, ideologically-driven traffic schemes are being abandoned, just a few months after being put in place — at huge cost to central Government.

The problem lies not just in cycle lanes, but in the LTNs, which many councils have put in place.

In many cities and towns, without any consultation, council contractors moved in over the summer to block roads with bollards and planters, turning many residential areas into no-go zones.

In the months since, they have become alarmed by the groundswell of opposition to their schemes, which in most areas crosses party lines.

Last week in Redbridge, East London, the council scrapped two such schemes after locals presented officials with a 4,000-strong petition.

Council leader Jas Athwal said residents had ‘deserved’ proper consultation before the bollards were put in place and that they were being removed because emergency vehicles were struggling with access.

Meanwhile, in Lewisham, South East London, an LTN is now being reduced in size after local businesses reported customer losses of up to 80 per cent since the restrictions came into force in August.

The LTN was also slammed by clean air campaigners, horrified by the ensuing gridlock.

One particularly vocal critic was local resident Rosamund Kissi-Debrah, whose daughter Ella died in 2013 after a fatal asthma attack thought to be linked to air pollution from the South Circular Road. 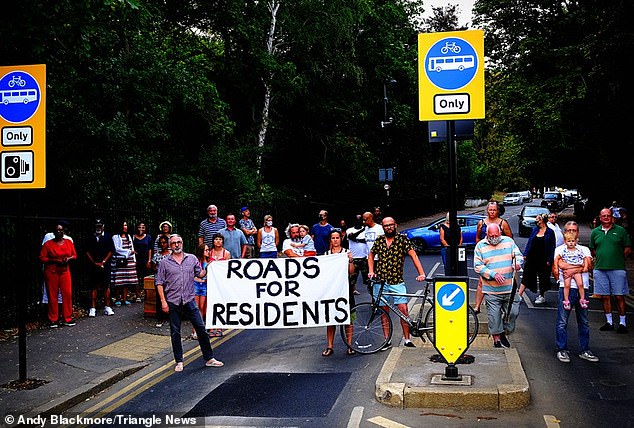 In many cities and towns, council contractors moved in over the summer to block roads with bollards and planters, turning many residential areas into no-go zones (protesters, pictured)

She told the Mail: ‘The scheme was chaotic and badly thought out from the start.

‘The traffic has simply been shoved on to the main roads and as a result there has been a huge build-up of air pollution.’

A new inquest into Ella’s death is due to be held next month.

Down in Brighton, the council has also U-turned on its decision to close a main road along the seafront following complaints from disabled drivers and local traders.

Trevor Archard, who runs a café in Madeira Drive, which was closed to promote cycling, told a public meeting that the measures had plunged local businesses into financial ruin, leaving them unable to pay rent.

Council officials also complained of lost parking revenue and the £400-a-day cost of employing marshals to ensure the rules were being obeyed.

Meanwhile, a new one-way system in the Reading suburb of Caversham has also been scrapped, after councillors described the pollution caused by standstill traffic as an ‘environmental disaster’ and hundreds of locals complained.

The scheme, which cost £45,000, was ditched after just a week, with Reading Council admitting that the roads were so heavily congested that some cyclists and motorbikes had mounted pavements and driven the wrong way to escape.

As one might expect, this nationwide epidemic of U-turns has not gone unnoticed at the Department of Transport.

Perhaps the Transport Minister, Grant Shapps, felt the uncomfortable chill of dissent from his own constituency, Welwyn Hatfield, after the local council was presented with a 1,200-signature petition complaining about the new traffic scheme killing his high street.

He ended up writing to the council, challenging the policy his own department had put in place.

Mindful of the political fall-out from such unpopular measures — and covering his own back — Shapps also wrote to local authorities on Sunday, warning that he might withdraw funding if they continued to abuse the Government scheme.

This week, he told the Mail: ‘Clearly there have been individual instances where schemes have fallen well below par.

‘Some emergency measures have been hurried through by councils, with little to no consultation of residents — meaning they have failed to deliver for locals or offer genuine improvements.

‘I’m determined to make sure the schemes rolled out as a result of the next round of funding work from the get-go for the whole community.

‘We’ve been consistently clear that councils must engage with local communities — and have publicly reminded all authorities that plans have to work for everyone.’

For the simple truth is that, at the moment, they’re hardly working for anyone.

One recent survey by Transport Focus, a research agency funded by central Government, shows that cycle use has remained static throughout the pandemic at about seven per cent of the travellers they monitored.

It’s hardly surprising, therefore, that many residents are rising up in fury at the new measures.

Barriers have been torn down and road signs defaced, while some areas of cities have been brought to a standstill by massive demonstrations against the new measures.

And in the upper echelons of Government, this seething groundswell of opposition has caused some consternation.

One former cabinet minister told the Mail: ‘It feels as if we are suddenly going to war with motorists again.

The Tory party has got to be very careful about this. At the end of the day, most people depend on their cars and making it impossible to drive is not a smart thing to do.