Cycling: Peter Sagan is fined £4,000 for injuring a cop during arrest for breaking curfew

Slovakian cycling great Peter Sagan is fined £4,000 for drunkenly injuring a cop during arrest for breaking lockdown curfew when he ‘struggled like mad’ because he feared being ‘forced to vaccinate’

Cycling star Peter Sagan has been fined £4,000 for breaking lockdown rules in Monaco last year after drunkenly injuring a policeman.

The Slovakian was allegedly drunk and accompanied by his brother in the city when he was stopped by the authorities at around 12.30am last April.

Sagan ‘struggled like a madman’ while he was being detained by cops, according to French outlet Nice-Matin, with an officer suffering a hand injury in the process.

Cycling star Peter Sagan has been fined £4,000 after breaking lockdown rules in Monaco last year, in an incident that saw him drunkenly injure a policeman

The 31-year-old – who has 17 Grand Tour stage victories – had feared he would be forced to vaccinate, his lawyers said while explaining his actions.

The three-time world cycling champion claimed he had no memory of the incident but apologised for his behaviour – calling it ‘an ugly experience’ which he has learned from.

‘Regarding the news that appeared today related to the night of April 25th, I wish to take this opportunity to convey my most sincere apologies,’ Sagan wrote on his official Facebook page..

‘It was an ugly experience that made me think profoundly and draw valuable lessons. I am truly sorry for this incident which will not happen again.’ 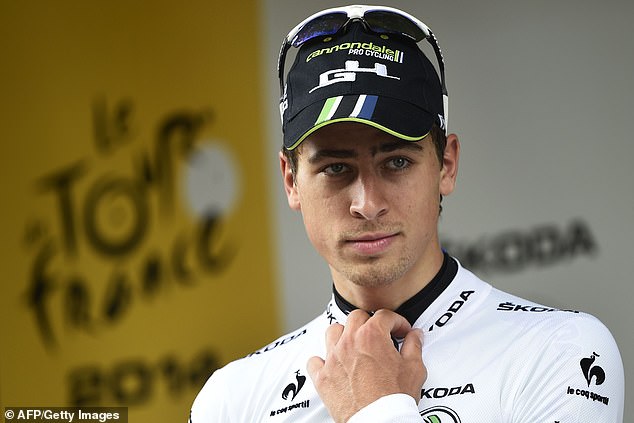 Sagan is in South America ahead of the Vuelta a San Juan race, and took the opportunity to visit Argentinian side Boca Juniors at La Bombonera – where he was presented with a number 10 shirt pitchside.

‘Yesterday I had a fantastic night that I will never forget,’ he wrote on Instagram after his trip to the stadium.

‘Not only was I able to attend an emotional match within the mythical Bombonera, but also, thanks to my friends from San Juan, I had the great privilege of receiving from @bocajrsoficial the legendary team jersey 10 with my name on it! Now I’m almost ready to pedal with all of you to La Boca.’