Death by MAGPIE: Cyclist tragically dies while trying to avoid a swooping bird – as expert issues fresh advice on how to avoid attacks

A cyclist has died after slamming into a fence when he veered off a bike track to avoid a swooping magpie.

The 76-year-old man was travelling on an off-road path near Nicholson Park in Woonona on the New South Wales south coast at 8.15am on Sunday when tragedy struck.

Witnesses saw the man ride his pushbike off of the path in an attempt to dodge the swooping bird.

He rode into a fence post and was thrown to the ground, leaving him with serious head injuries.

The man was airlifted to St George Hospital in a critical condition after receiving treatment at the scene. He died in hospital on Sunday evening.

The Magpie Alert detection website has six registered attacks on cyclists from Nicholson Park this year, with one attack as recent as Friday last week.

‘I cycled on the road to try and avoid it on my way back but the magpie chased me,’ one report reads.

‘It is amazing how far it will roam from the nest to chase a chosen victim,’ another comment says.

Magpie swooping season starts in September when birds lay their eggs and runs for about five weeks.

‘Birds only swoop when they’re protective, when they have established a risk,’ Professor Kaplan said, adding that making eye contact with Magpies will help them ‘learn’ you face.

‘If you look at the bird and show you are not a threat it will remember your face and not attack you.’

Experts recommend wearing sunglasses, holding large items over your head and keeping your distance to avoid a magpie attack. 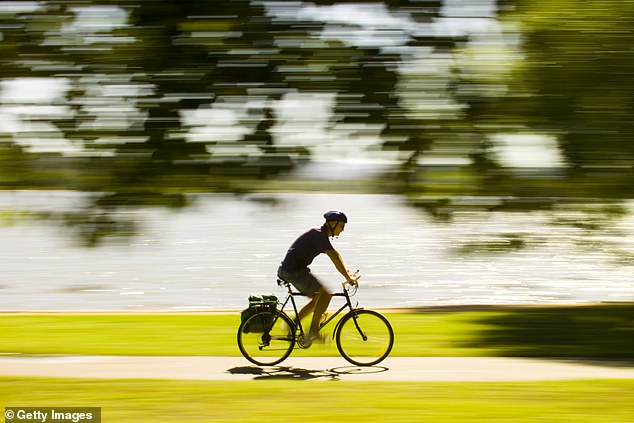 The cyclist was airlifted to St George Hospital in a critical condition after suffering serious head injuries. He died in hospital on Sunday night (stock image)