A motorist caught a daredevil bike rider catching a high speed ride while holding onto the back of a semi truck that was driving down a California highway.

The video, which was taken on Wednesday, shows a black-clad cyclist hanging onto the back of a Knight Transportation refrigerated truck with his left hand.

The cyclist, who sports dark sunglasses and a backpack, appears nonchalant despite the fact that he is traveling as much as 55mph on a highway, without a helmet or any other protective gear. 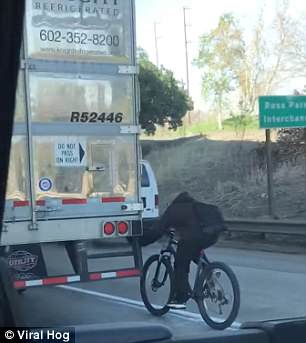 The video was shot on Highway 99 in Fresno, California, according to UPI.

‘I was driving home from work and saw this,’ the man behind the video camera wrote in the clip’s caption.

It’s unclear if the driver of the semi truck is aware that the bicyclist is there.

‘Guy’s got a f**ing death wish,’ the man behind the video camera can be heard saying as he drives past the man on the bike.

The speed limit for trucks on the stretch of the highway where the video was shot is 55mph. 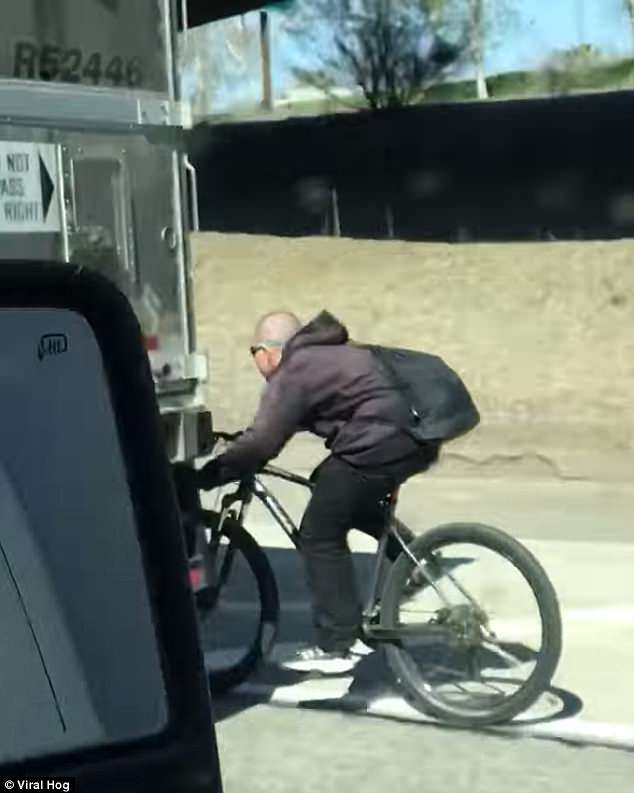 The cyclist appeared nonchalant about his dangerous California highway journey

Viewers of the clip were not amused by the bike rider’s stunt, which police said is illegal

A California Highway Patrol officer told the Fresno Bee that it is illegal for bicyclists or skateboarders to hold onto a moving vehicle.

Viewers of the video were not amused by the cyclist’s stunt.

‘Nice let’s die or even worse let’s cause a accident with chance of fatalities,’ commented one YouTube viewer.

‘To be honest, I would’ve drove up next to the driver side of the trucker and try to let him know… If that guy gets hurt it COULD possibly go against that driver..,’ another YouTube viewer wrote.