Cyclist walks off after being slammed by a car in Bundaberg,Queensland

The shocking moment a cyclist was hit by a four-wheel-drive has been caught on camera – as police try to track the rider down.

The man was hit by a Toyota Landcruiser on the morning of May 16 at a busy intersection on Takalvan and Walker Street in Bundaberg, Queensland.

He was knocked off his bike before he stood up and calmly walked away, leaving the distressed driver and police desperate to find him.

The video shows the man riding his push bike against traffic in a bike lane before he pulled on to the road.

As he swung his bike on to the busy street he was instantly hit by the vehicle, which knocked him onto the ground, landing on his side and smacking his head on the pavement.

The rider, who was wearing a helmet, then picked up his bike before walking off as cars drive around him. 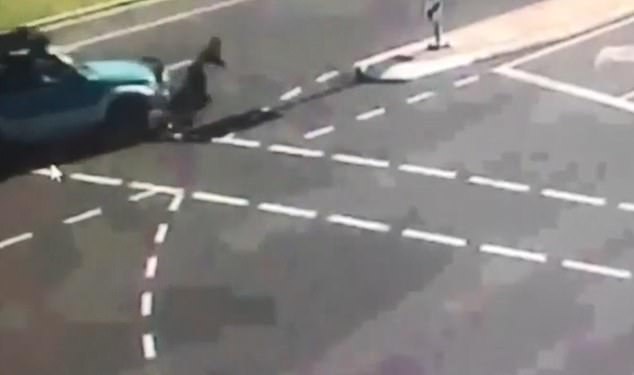 A 29-year-old woman was driving the car that hit the cyclist and hopes police can track him down to ensure he suffered no injuries.

‘She thought she heard someone and wants to make sure the rider wasn’t injured,’ a Queensland police spokeswoman told the Courier Mail.

The spokeswoman said police had been unsuccessful in tracking down the cyclist and didn’t receive any information from other drivers.

‘(Police) have been unable to identify the cyclist and therefore don’t know if they had any injuries, or get his version of (what happened) in the crash,’ she said.

The video was posted online, sparking a fiery debate among Facebook users, some who took sides with the driver.

‘You can see in the video old mate on the bike is riding the wrong way down the road. Then crosses at the crossing,’ one said. 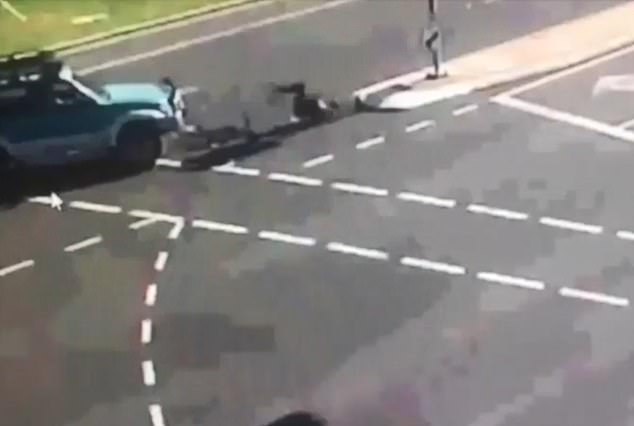 ‘The driver of the car, reported the incident to the police and they are trying to identify the cyclists to make sure he’s ok! By the footage the cyclists was in the wrong,’ another said.

Others jumped to the defence of the cyclist.

‘If a fully loaded truck just ploughed into a Hilux you would all be up in arms about how dangerous trucks are in the road. Attitudes here need to change,’ one said.

‘Had a car nearly run me down last week when they ran a red light. You can never be too careful,’ another commented.

Police are urging anyone with information or dash cam footage to come forward.