‘Somebody who buys things like this shouldn’t have a credit card’: Cyclist with a megaphone launches into a bizarre rant in front of a ‘300 grand’ Rolls-Royce parked on double yellow lines

Performance artist Danny Shine, 52, has once again taken to the streets of London to espouse his opinion on anything that takes his fancy.

In this instance, a cycle-lane blocked by a red Rolls-Royce Wraith, parked on double yellow lines no less.

Wasting no time Shine gets onto the megaphone to admonish not the drivers of the expensive car, but their friends who let them waste their money.

He says: ‘Nobody tells these people the truth, about what plonkers they are, spending £300 grand on a car.’

‘If I were a good friend of this person, I’d take away the credit card.’

He doubles down asking the gathering crowds: ‘Is this really necessary?’

People line the streets as he continues to speak through his megaphone, attracting laughter from those who can’t believe the strange spectacle.

Can you hear me now?: True to form Shine breaks out his megaphone to better the chances that his observations will reach the public 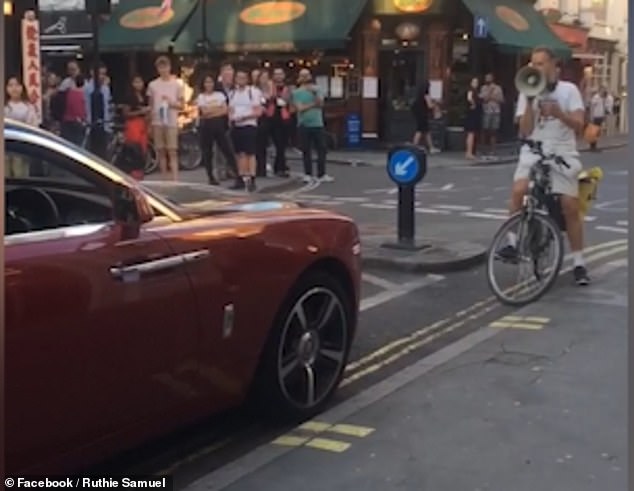 Ignoring the noise, the Rolls doesn’t show any sign of moving anytime in the near future despite being parked on double yellow lines

Shine faced a court summons in 2013 after he was accused of breaking an 18-year-old bylaw meant to protect the public from annoyance caused by noise.

Speaking to the Independent at the time, Mr Shine said: ‘This law is completely arbitrary. It allows a member of the public or a civilian officer to prosecute you because you’ve annoyed him.’

Following his summons Shine has regularly made public appearances around the capital, demanding the public’s attention through his megaphone, sharing his views on whatever comes to mind.