A huge cyclone about to smash into Far North Queensland with torrential rain and high winds already causing flooding and leaving 40,000 homes without power.

Cyclone Niran is moving slowly at 8km/h, with wind gusts reaching up to 130km/h at 320km northeast of Cairns on Tuesday afternoon.

With winds at 95km/h on Tuesday night, the cyclone is at category two and a forecast map shows it is expected to develop into category three by Thursday 7am.

Dozens of schools in Far North Queensland were forced to close and residents of remote islands warned to prepare for possible gale force winds.

Heavy rain reached as far south as Coffs Harbour with Brisbane recording 16mm since 9am on Tuesday, with more expected until Friday.

With winds at 95km/h on Tuesday afternoon, the cyclone is at category two and a forecast map (pictured) shows it is expected to develop into category three by Thursday 7am

‘It is a category two system and it is expected to intensify into a category three system tomorrow,’ senior meteorologist Laura Boekel said.

Ms Boekel said the cyclone was causing high winds, rainfall and abnormally high tides and she expected the cyclone would move off the coastline on Thursday.

‘That’s when we’ll start to see impacts easing for residents in Queensland.’

An emergency warning has also been issued for Palm Island residents by the Queensland Government’s Local Disaster Management Group.

The region is impacted by heavy rain and gale force winds, and residents are advised to cancel travel, secure their premises, find a safe place to shelter and stay at home.

The wild weather forced 38 schools in Far North Queensland to close on Tuesday but Cairns Deputy Mayor Terry James told Sunrise the weather had died down.

‘The conditions here at the moment is pretty typical in Cairns, beautiful one day and perfect the next,’ he said.

‘These things are very unpredictable. So we are saying to the people in the area just be vigilant, keep the eyes and ears open and listening to the forecast, listen to the radio and be prepared.’

Six state and eight Catholic or private schools remain closed by the storm.

BOM said as of 4pm on Tuesday afternoon, winds near the centre of the storm were about 95 km/h and wind gusts are reached up to 130km/h.

While coastal crossing is not expected, as it develops or if it drifts westwards it may cause gales of 100km/h about the exposed coastal and island communities between Cape Flattery and Innisfail.

Further south to Lucinda or between Cape Melville and Cape Flattery may also be impacted by gales on Wednesday night.

From Thursday the whirlwind is expected to take a southeasterly track away from the coast, relieving locals. 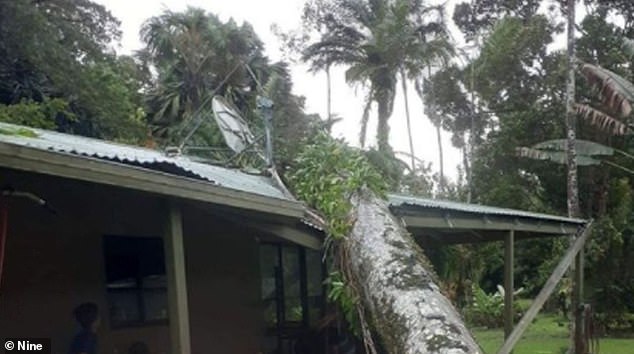 At least 40,000 homes are left without power by a devastating cyclone which is causing flooding in some areas. Pictured: Far North Queensland home 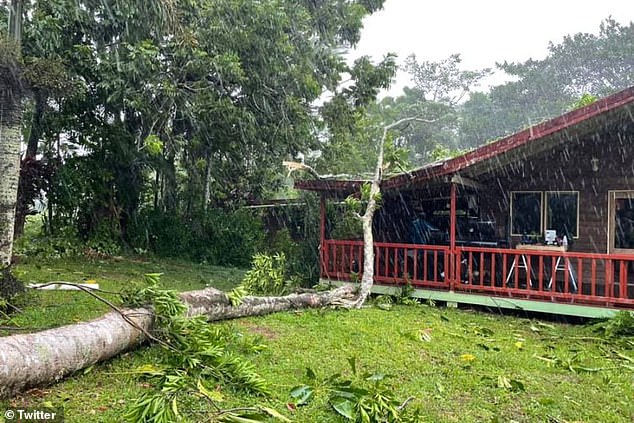 Cyclone Niran is moving slowly at 8km/h, with wind gusts reaching up to 130km/h at 320km northeast of Cairns, Queensland (pictured) on Tuesday at 4pm 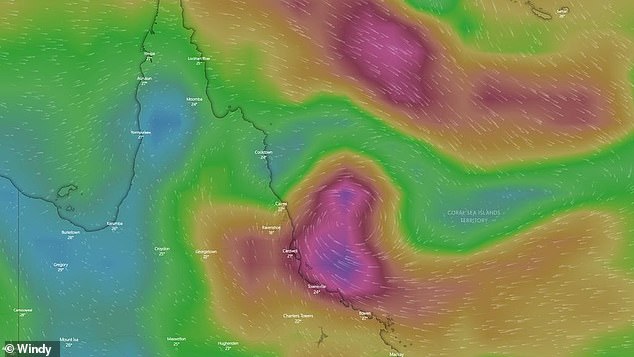 Motorists were advised to avoid parking their cars in low-lying tidal areas and to not drive through floodwaters in case of more heavy rainfall or flash flooding.

‘Soils and catchments are already saturated after weeks of rain on the north tropical coast,’ said Bureau of Meteorology expert Jackson Browne.

‘Flooding could extend as far south as Mackay as the low strengthens.’ 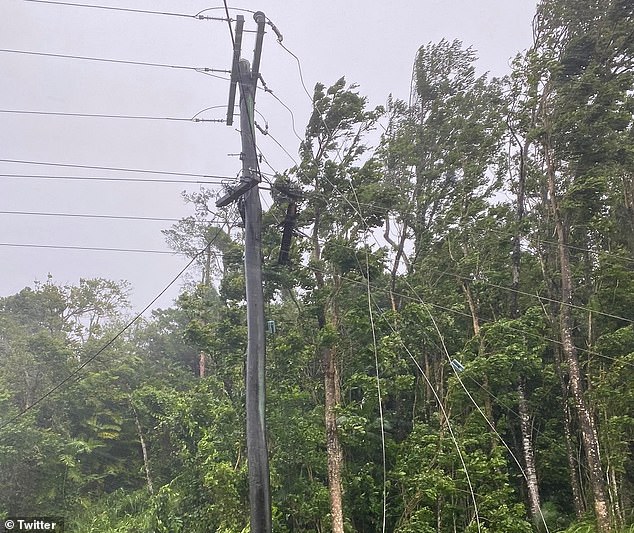 The cyclone was causing high winds, rainfall and abnormally high tides and is expectedto would move off the coastline on Thursday 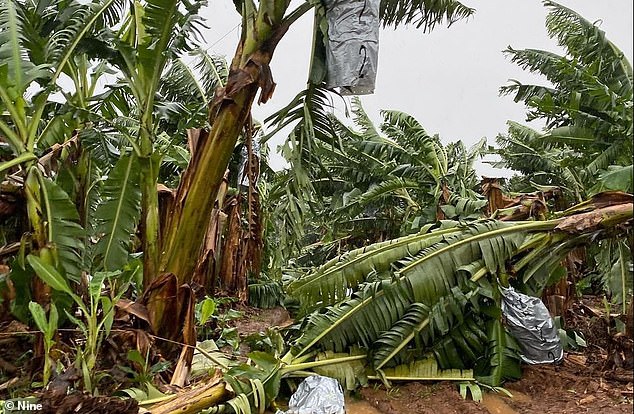 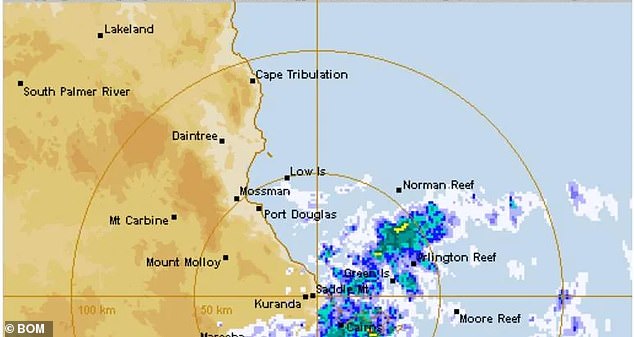 A number of trees fell across the Gillies Range Rd at Gadgarra in Queensland’s Tablelands Region, resulting in further delays after traffic was reduced to one lane.

Meteorologist Michael Gray revealed the extreme weather in far north Queensland was due to the development of a monsoon trough as well as a reach of high pressure along the east coast.

‘Since 9am on Saturday, we have seen rainfall totals up around 100mm around the Proserpine River and over 50mm through large parts of an area from about Mackay up towards Cairns,’ he told the Courier Mail.

‘We will still see fairly significant rainfall (from Mackay to Cairns) that will continue at least to Wednesday… or possibly through to later in the week.’