Actress Cynthia Nixon jumped into the race for New York governor by blasting ‘crushing inequality’ – in a bid that immediately set up an ideological primary clash against incumbent Andrew Cuomo.

Nixon played workaholic lawyer ‘Miranda’ on HBO’s ‘Sex and the City,’ which aired for six seasons.

On Monday, she released a campaign video that showed her strolling the streets of Manhattan with a cup of coffee and riding the subway, while asking how the state she grew up in could become the the ‘most unequal state in the entire country.’

The repeated the line in her campaign announcement Tuesday. ‘The top 1 per cent of New Yorkers earn 45 times what the other 99 per cent earn combined,’ she said.  ‘This is not something that just happens by mistake,’ she said.

She said she voted for Cuomo eight years ago because she believed he was a ‘real Democrat’ – but then said he has since showed his ‘true colors.’

She said he has given ‘massive tax breaks to corporations and the super rich’ as governor.

Actress Cynthia Nixon announces that she is running for Governor of New York at a campaign stop in Brooklyn, New York, U.S., March 20, 2018 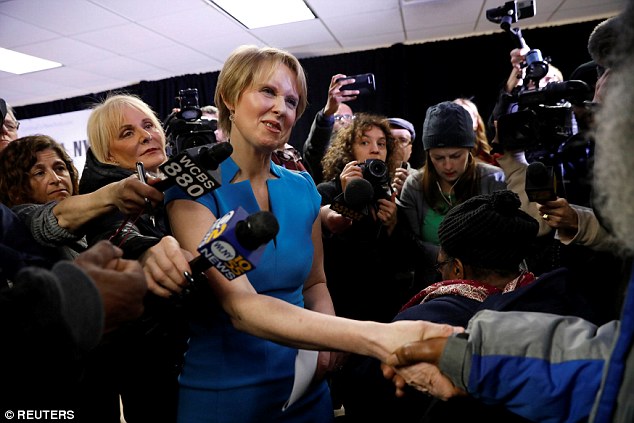 Actress Cynthia Nixon shakes hands at campaign stop after announcing that she is running for Governor of New York in Brooklyn, New York, U.S., March 20, 2018

The video also included shots of desolate upstate towns, and concludes with her riding a train, with train whistles in the background – and indication that she will head upstate at some point to campaign in struggling communities outside of the bubble of the five boroughs.

She also went after Donald Trump and blasted Cuomo for accepting campaign contributions from the Republican mega-donors the Koch brothers in 2010.

Nixon stresses her own biography, which includes having grown up in a ‘one bedroom fifth floor walk-up’ apartment with her mother.

But she is already launching attacks on the more centrist Cuomo. Her website has a tab on ‘#CuomosMTA,’ a shot at his stewardship of the Metropolitan Transit Administration.

‘Something has to change. We want our government to work again – on health care, ending mass incarceration, fixing our broken subway,’ she says in her video. 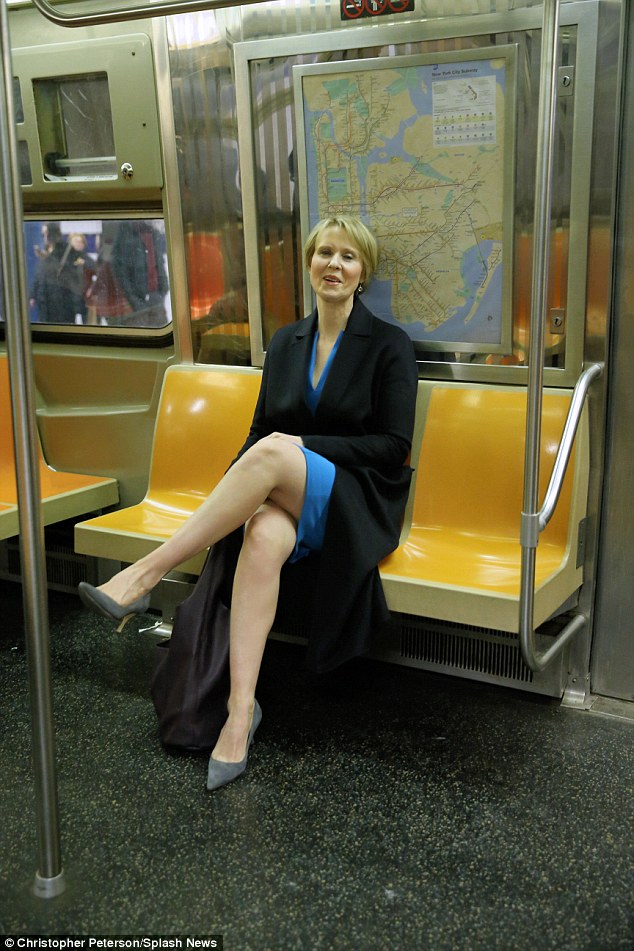 IF YOU SEE SOMETHING, SAY SOMETHING: Nixon calls for ‘fixing our broken subway’ in her debut campaign video

Her campaign is being advised by two veteran strategists for Mayor Bill de Blasio, Bill Hyers and Rebecca Katz. De Blasio cruised to an easy reelection, but his efforts to try to play in Iowa in the run-up to the 2016 election fell flat.

Her video was viewed one million times Monday night on Twitter, the New York Times reported.

She and Cuomo will face off in a primary Sept. 13. It is already becoming one of the nation’s most closely watched internecine battles, due in part to her stardom and also to Cuomo’s potential as a presidential candidate in 2020.

A new Sienna poll had Cuomo leading Nixon 66 percent to 19 percent, and besting her among every demographic – including both moderates and liberals, as well as upstaters and city dwellers.

The 51-year-old declared her candidacy with a two-minute campaign video posted on Twitter that showed her at home with her wife and children, riding the subway, taking one of her children to school and speaking at liberal political causes. 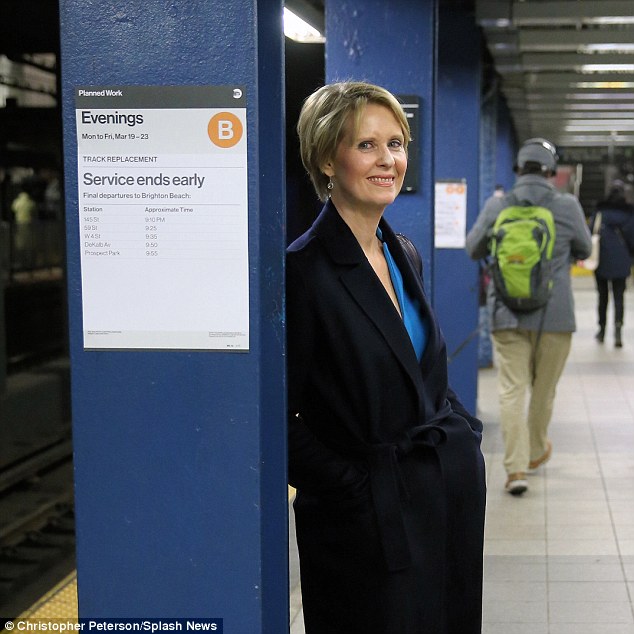 IN SERVICE: Nixon’s campaign website hints it will go after Cuomo for his stewardship of the Metropolitan Transit Authority 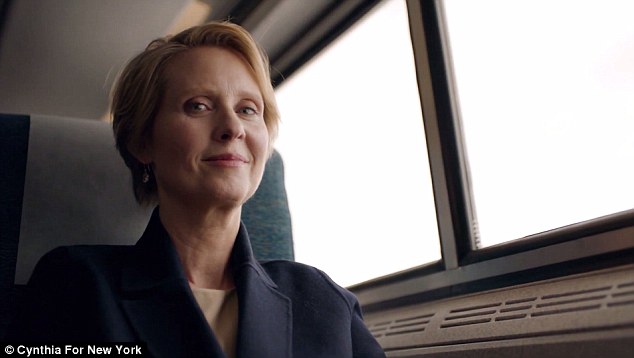 GO NORTH! Her video concludes with a shot of Nixon riding a train, though a new poll shows her trailing Cuomo upstate

The actress and liberal activist, who has campaigned for gay marriage, public schools and access to women’s health care, announced that she was “sick of politicians who care more about headlines and power than they do about us.”

“Our leaders are letting us down. We are now the most unequal state in the entire country with both incredible wealth and extreme poverty. Half the kids in our upstate cities live below the poverty line. How did we let this happen?” she said in the video.

“Something has to change. We want our government to work again — on health care, ending mass incarceration, fixing our broken subway. 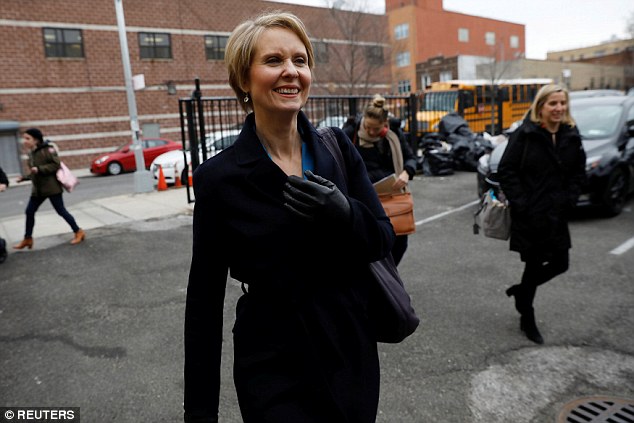 Actress Cynthia Nixon arrives at campaign stop to announce she is running for Governor of New York in Brooklyn, New York, U.S., March 20, 2018 ACTION! Actress Cynthia Nixon rides the subway to her press conference in Brownsville after announcing her run for New York State Governor in New York City, New York on March 20, 2018

“Together we can win this fight,” finished the New York-born and raised Nixon, who said she grew up with her mother in what she called “a one-bedroom, fifth-floor walkup.”

The Trump presidency has seen a surge in women — particularly Democratic women — running for office. Only eight of the current 50 US state governors are women.

In 2004, Nixon accepted an Emmy award — the highest accolade in US television — for her role as Miranda Hobbes from Trump, the fellow celebrity-turned-politician whose current presidency she publicly opposes. 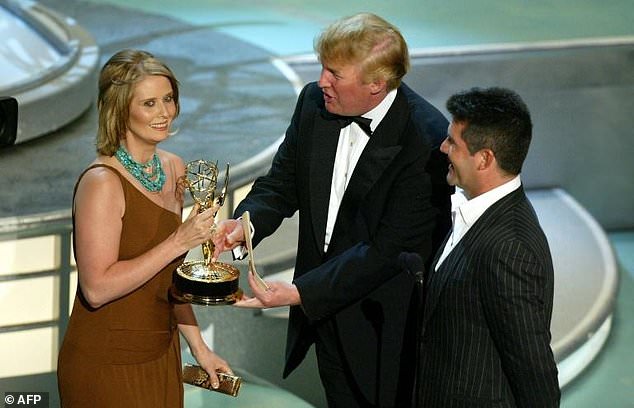 New York, the fourth most populous state in the United States, goes to the polls to elect a governor on November 6. But Nixon remains a left-field candidate with Cuomo very much the favored contender ahead of the Democratic Party primary on September 13.

Despite the stardom brought by her role alongside Sarah Jessica Parker on the hit HBO comedy from 1998-2004 that spawned two movies, a recent Siena College poll found that Cuomo is overwhelmingly favored by Democrats to Nixon by 66 to 19 percent.

The governor, who is seeking his third term, has downplayed the competition and Nixon has never previously run for office. 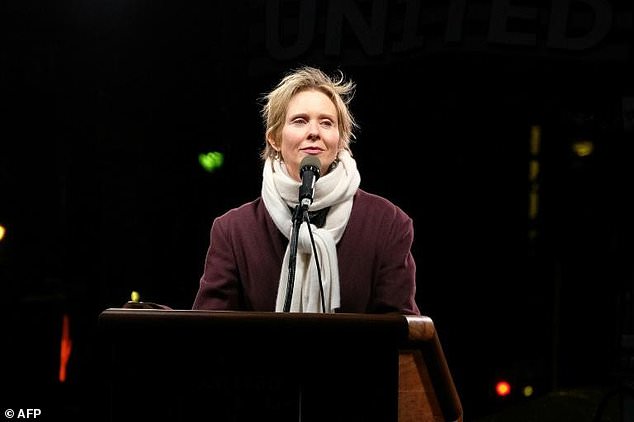 Considered a potential Democratic presidential candidate for 2020, Cuomo is shored up by a bevvy of powerful supporters, but it remains unclear whether he will be badly damaged by the recent conviction of a close friend and aide for bribery.

Nixon, who is close to left-leaning New York Mayor Bill de Blasio, echoes some of the language used by 2016 Democratic Party presidential contender Bernie Sanders, who electrified the left before ultimately losing to Hillary Clinton.

Her campaign fundraising page stipulates that she “won’t be accepting any corporate contributions” and that “instead our campaign will be powered by the people.”

If Trump has proved a celebrity can win office as a political novice, the mother-of-three is far from the first US actor to venture into politics.

Republican president Ronald Reagan got his political start after acting as a two-term governor of California from 1967 to 1975. Arnold Schwarzenegger, the Austrian-born body builder, also served as California governor from 2003-2011.

And Former television comic Al Franken — for whom Nixon once campaigned — was Democratic senator of Minnesota from 2009 until early this year, when he was forced to step down over sexual misconduct allegations.