Without Gareth Bale and facing defeat due to a comical own-goal, Wales showed superb character to claim a point that keeps them in the race for World Cup qualification.

Yet despite Dan James’ equaliser in the 69th minute, Rob Page’s side left Prague wondering what might have been. Led superbly by Aaron Ramsey in the injured Bale’s absence, Wales had 16 shots and were dangerous throughout, only to cause their own problems either side of half-time.

Playing his first qualifier for nearly two years, Ramsey stroked home a 36th-minute opener during a dominant period – but Wales allowed Jakub Pesek to level instantly. Then four minutes after the break, goalkeeper Danny Ward made a mess of Ramsey’s backpass and Wales were behind in a game that appeared there for the taking. 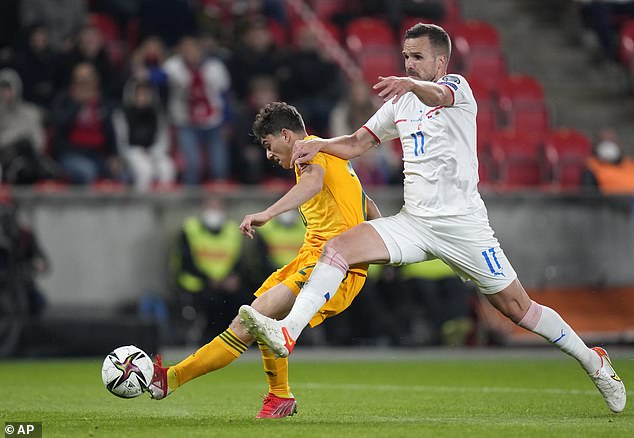 Page was rewarded for his bold substitutions and one of them, Harry Wilson, created the second for James. There was still time for Wilson, Kieffer Moore and James again to waste excellent chances, while Moore also missed in the first half.

Wales’ performance in the Nations League mean they are virtually assured of play-off spot to reach Qatar 2022, yet finishing second in this group would likely give them a more manageable tie.

Page’s team now face Estonia on Monday. If a draw is an acceptable result here, nothing less than victory will do in Tallinn.

‘We should have six points from our last two games so we are frustrated but second spot is still our aim and it’s in our hands,’ said Page. ‘We had enough chances to win two games and it shows how far we have come in Welsh football that we are disappointed with a draw here.

‘Danny Ward is obviously disappointed but he has been excellent for us. He is strong-minded he will come back from this no problem at all.

‘Aaron Ramsey was outstanding. He is just an absolute pleasure to watch when he is in form like that. It’s a crying shame he is not playing [for Juventus] week-in, week-out. I’d like to see him back in the Premier League so fans all over the country can watch him every week.’

Bale missed the chance to claim his 100th cap here due to a damaged hamstring, meaning the inclusion of Ramsey was even more important.

With Wales fans present in different parts of the stadium, the visitors took the knee before kick-off and were whistled by the home crowd. Then Ramsey was booked inside a minute for a foul on Filip Novak. 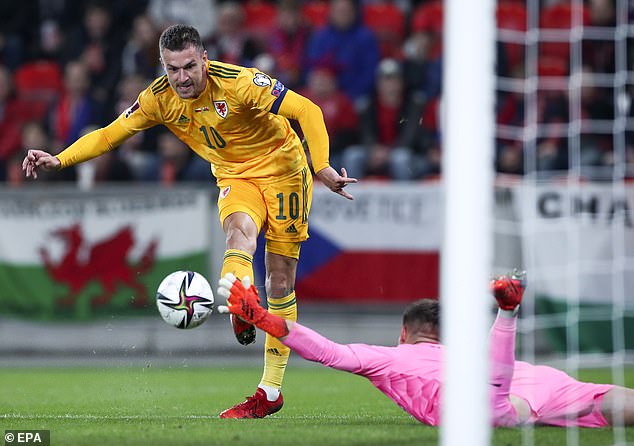 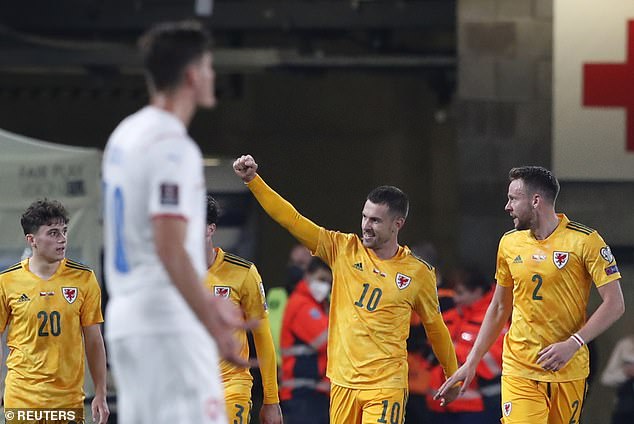 Wales could have gone behind in the ninth minute when Patrik Schick released Adam Hlozek, whose angled drive was well stopped.

Having survived that scare, Wales let the Czechs off the hook. Ramsey’s superb ball from deep found James and Kieffer Moore two-on-one. James delayed and then overhit his pass, meaning Tomas Vaclik had time to race from goal and block Moore’s attempt.

Wales took the lead nine minutes before half-time with a brilliant goal on the counter-attack, started and finished by Ramsey.

Schick’s 25-yard effort was deflected over for a corner, which Ramsey headed clear to Ethan Ampadu. Ampadu found Neco Williams, who was upfield for just such a situation. James just failed to head in Williams’ cross only for Ramsey, who had charged 80 yards, to collect the ball and pause for a moment before sweeping it into the far corner. 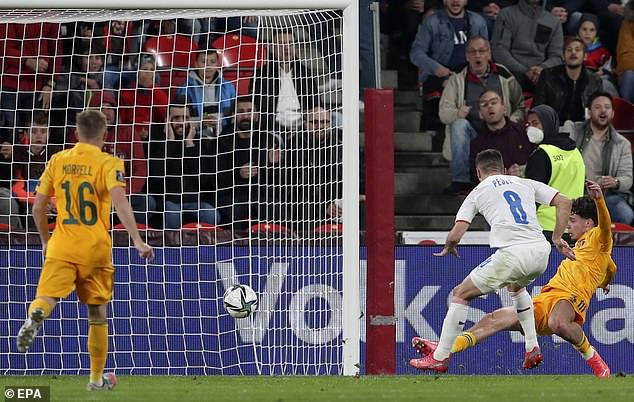 Wales should have taken control only to be pegged back inside two minutes. Novak broke free on the left and though Ward parried his low strike, Pesek turned in the loose ball from eight yards.

Nothing could prepare Wales for the goal that gave the Czechs the lead in the 49th minute.

Ramsey had intercepted Antonin Barak’s pass and directed the ball back towards Ward. Though the back-pass was on the firm side, the Leicester goalkeeper should still have dealt with it. Instead he failed to control it and as the ball spun back, Ward could not recover in time to keep it out. 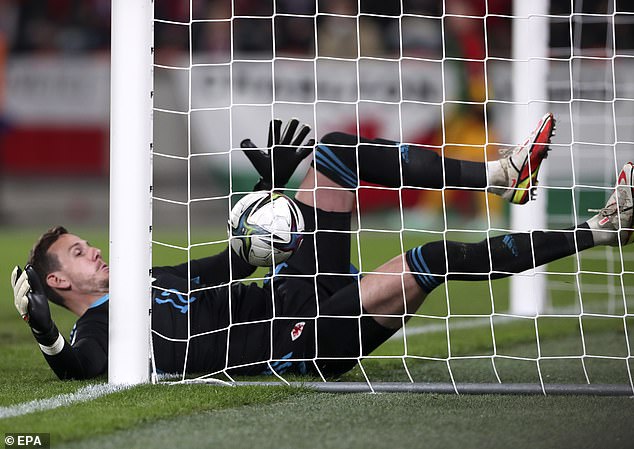 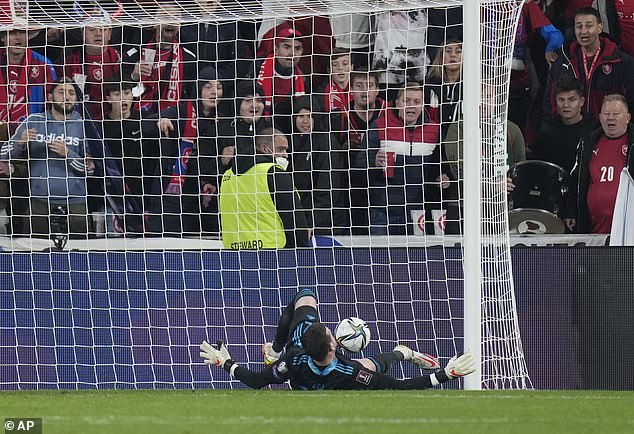 Page made his attacking moves on the hour sending on Connor Roberts and Wilson, and the changes paid off. With a little more than 20 minutes remaining, Wilson spotted James’ run and weighted his pass perfectly for the winger to shoot across Vaclik. After a nervy wait for a VAR check, Wales could celebrate.

Then a second clever Wilson pass sent in Ramsey, though this time Vaclik parried. There was another near-miss when Roberts crossed for Moore, whose header fell narrowly wide.

Both sides were creating chances. Wilson’s ambitious back-heel was just off target before Roberts got his head in the way of a ferocious shot from Schick. Then from yet another Wales counter, James had both Wilson and Ramsey in space but choose to keep the ball and when he shot, it drifted harmlessly wide. 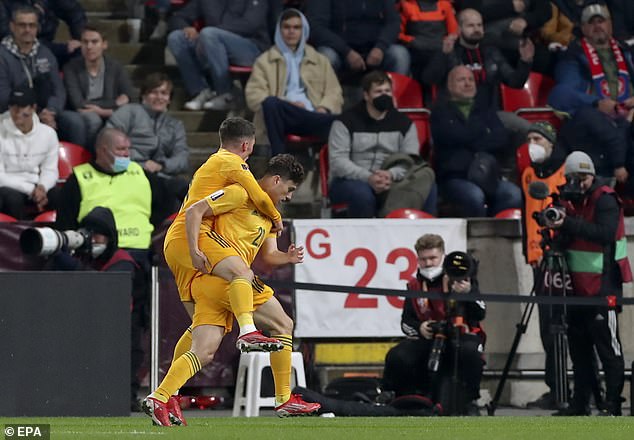