A New York father-of-seven had the opportunity to save his son’s life by donating part of his liver – but only if he could lose 40 pounds in time.

Sawyer Kelley was born in October 2018 with a rare genetic condition known as Alagille syndrome, which scars and damages the liver.

As the months went by, doctors told his parents, Sean, 37, and Josie, 40, of West Almond, that Sawyer needed a life-saving transplant.

With Josie unable to donate because she has the same disorder, Sean wanted to be tested to see if he was a match – but he was rejected because he was overweight.

So he got to work, and began eating a healthy diet and exercising daily in August 2019. Within three months, he lost 40 pounds.

When he applied again to get tested, he was declared a perfect match for Sawyer now age one.

Sawyer Kelley, one, from West Almond, New York, was born with Alagille syndrome. Pictured: Sawyer (right) at the hospital with his parents, Sean and Josie 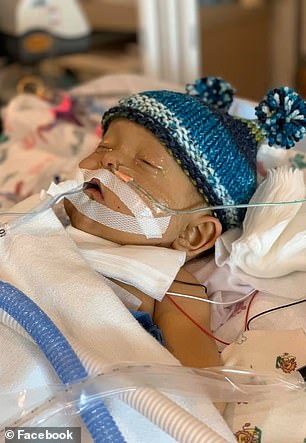 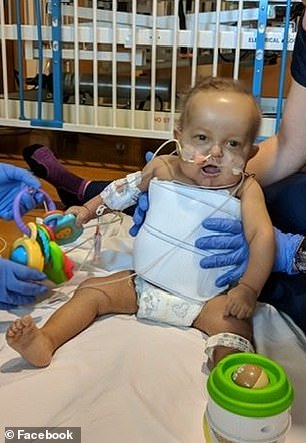 The genetic disorder affects the liver, causing scarring and damage. Doctors told Sawyer’s parents that he would need a life-saving transplant. Pictured, left and right: Sawyer at the hospital

Sean told DailyMail.com that when his wife was expecting Sawyer and his twin, Silas, her pregnancy seemed to progressing normally.

However, around the five-to-six-month mark, doctors noticed that Sawyer was not growing as quickly Silas was.

Around thirty-seven-and-a-half weeks, Josie was induced.

‘As soon as Sawyer was born, they could tell his liver wasn’t functioning the way it should be,’ Sean said.

‘He was very jaundiced, very yellow.’

Sean and Josie suspected that Sawyer, like two of his older siblings, had a condition known as Alagille syndrome.

The liver of a child with Alagille syndrome has fewer small bile ducts than normal, causing bile to build-up which, in turn, scars and damages the liver.

It is estimated to affect one in 70,000 newborns, according to the National Institutes of Health.

Symptoms can include yellowing of the skin and whites of the eyes (jaundice), itching, dark urine, bumps under the skin’s surface, and an enlarged spleen.

The heart, kidneys and bones can also be affected. 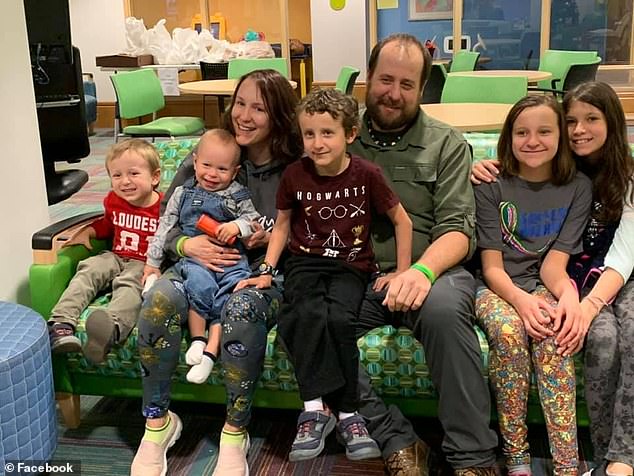 Three of the Kelleys’ children, including Sawyer, have the condition. Pictured, from left to right: Asher, Silas, Josie, Tristan, Sean, Meara and Christina 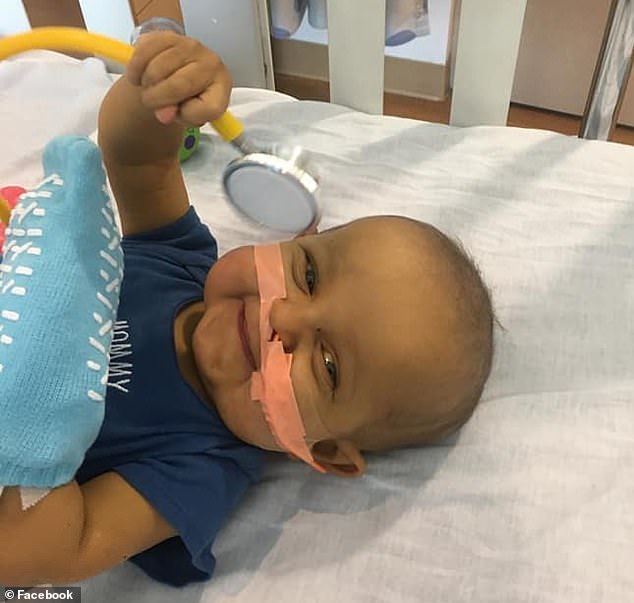 His mother, Josie, has the same condition and was unable to donate to Sawyer (pictured) and his father, Sean, was disqualified because he was overweight

In the Kelley family, daughter, Meara, has itchy skin and son, Tristan, had to have open-heart surgery at three months old, because they both inherited the disease.

But Sawyer’s is the most severe case because his liver began to fail from the time he was born and only got progressively worse. Doctors told the couple he needed a transplant.

‘It became clear his liver was deteriorating and he was going to require a transplant for the best chance of survival,’ Dr George Mazariegos, chief of pediatric transplantation at UPMC Children’s Hospital of Pittsburgh, told DailyMail.com.

‘We really believe the transplant gives [Sawyer] the best chance to be a kid.’

Josie was unable to donate because she also has Alagille syndrome. Initially, Sean was also eliminated from consideration.

‘When I first filled out the form to get tested to see if I was a match, I got a message back that said: “Thank you for your interest. You don’t qualify to be evaluated because your BMI (body mass index) is too high.”‘

It meant that for Sean to even be tested to determine if he was a match for Sawyer, he would have to lose some weight. 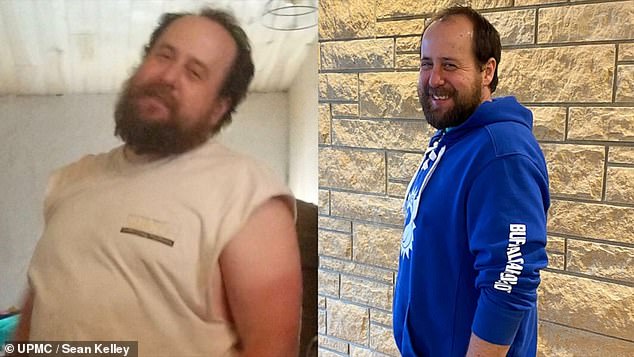 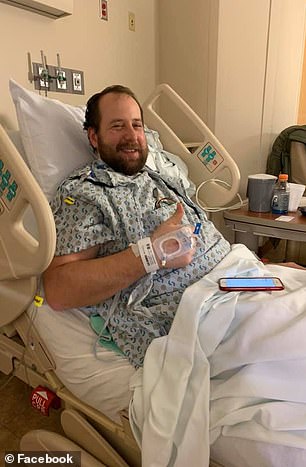 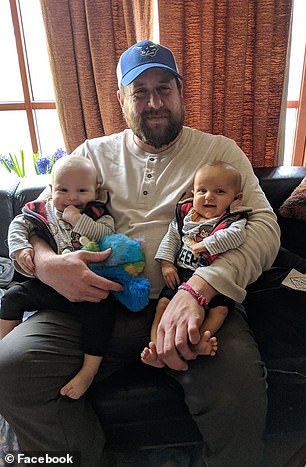 In October, Sean was tested and declared to be a match for one-year-old Sawyer. The transplant surgery took place on December 19 and both are currently recovering at home. Pictured: Sean in the hospital for surgery, left, and at home with Silas and Sawyer, right

Sean started eating a healthy diet, maintaining it by diligently tracking his daily calories via an app on his phone. During his lunch breaks, he would walk two to three miles.

In October, Sean finally received a phone call from the transplant coordinator at UPMC that he was a match.

‘It was overwhelming…this rush of emotion took over and I had to sit down and collect myself,’ he said.

On December 19, the eight-hour surgery was performed, which Dr Mazariegos described as ‘complex.’

Both Sean and Sawyer are now recovering at home.

Sean says he feels ‘fortunate’ that the surgery could be performed and wants to stress the importance of organ donation.

Sawyer no longer has jaundice skin and his blood tests no longer show markers of liver failure.

‘We love all of our kids and are proud that, with his new liver, Sawyer has been able to battle [his syndrome] back,’ Sean said.